We arrived at Grand Targhee Resort late Sunday afternoon, eager to check out the winter fat bike trails. Yes, I’m aware of the chorus, “Fat biking at a ski resort?! No way, when there’s snow, you should ski!” rising to a crescendo right about now. Not to worry… my husband, Scott, and I had a plan to address that issue. We are not downhill skiers, though we do nordic backcountry ski at home in Buena Vista, CO. In order to know what we’re missing, we decided to start our week at Grand Targhee with a full-day ski lesson.

Grand Targhee Resort is located in the Caribou-Targhee National Forest on the Western Slope of the Tetons. It is on the Idaho side of Teton Pass though, technically, the resort is in Wyoming. The moniker “Wydaho” covers the stateline communities in the Teton Valley. In fact, Idahoans in the valley were responsible for establishing Grand Targhee Resort in Alta, Wyoming, back in 1966. The resort opened on December 26, 1969, when 2000 skiers showed up, paying $3.75 for a lift ticket or $55 for a season pass. At that time, there were two lifts and the Targhee Lodge. Flash forward 46 years to a year-round resort with five lifts; 99 runs; downhill ski, snowboard, nordic ski, snowshoe, and fat bike rentals; lessons and tours; four dining options; and slopeside lodging. With over 500 inches of snow annually and a laid back, uncrowded vibe, Targhee was the perfect place to give skiing a go. First stop, however, was tackling the infamous “Wydaho Nachos” and the apres ski scene at The Trap Bar & Grill.

Monday morning greeted us with a couple inches of fresh snow and flurries as we headed out to pick up our rental skis. The staff set us up with the premier demo package of skis, boots, and poles. Fully equipped, we set off for the nearby ski school. There, we met our instructor, Tuffy, who has been teaching at Grand Targhee for over 20 years. The morning went by quickly as Tuffy patiently and professionally taught us the basics of downhill skiing.

I really appreciated his ability to observe, analyze, and effectively communicate in ways that made sense to each of us. His emphasis on correct technique leading to safe and effective skiing helped me feel comfortable right away. After we broke for lunch at the Branding Iron, we spent another couple hours practicing our new skills. We opted to end on the green runs via the Shoshone lift rather than risk going to the top of the mountain when we were tired and losing our newly-acquired mojo.

Over dinner in Victor, ID at Wildlife Brewing & Pizza, we reflected on our ski lesson day. We agreed that it was a worthwhile experience to take on a new skill under expert tutelage, but that we’d likely stick with our backcountry skiing in the future, being more view junkies than adrenaline junkies. I would definitely recommend that anyone who wants to learn to ski do so with at least a few lessons from an experienced instructor like Tuffy, through a reputable ski school. It’s always worth learning the right way the first time.

Tuesday morning, we met our fat bike tour guide for breakfast at Snorkels. We had the great good fortune of being guided by Andy Williams himself. Andy is Grand Targhee’s Events Manager and Mountain/Fat Bike Trail Designer and Builder. He has a couple decades of experience running major mountain bike competitions, such as several World MTB Championships and MTB events at the 1996 Olympics in Atlanta, Georgia. His trail-building chops are evident in the Dual Slalom course at the 1995 NORBA National Finals in Helen, GA. Grand Targhee Resort is fast becoming a mountain biking destination due to Andy’s eight years of trail building. In the summer, there are over 50 miles of singletrack riding at the resort. We, however, were there for the winter fat biking and were eager to ride the 13 miles of groomed trails, comprised of nine miles of Nordic trails and four miles of singletrack. We followed Andy to the Nordic system, after stopping for an overview at the Trail Kiosk.

Grand Targhee Resort, under Andy’s leadership, became one of the first to allow fat biking on the groomed Nordic trails. He had started the process in 2006/07, but put the plan on hold after the 2008 market crash. Over the next few years Andy worked with the Teton Valley Trails & Pathways organization and the area snowmobile organization to work out cooperative winter-user trail etiquette and access. He designed the winter triangle sign and many of the winter Fat Bike guidelines now used by IMBA. 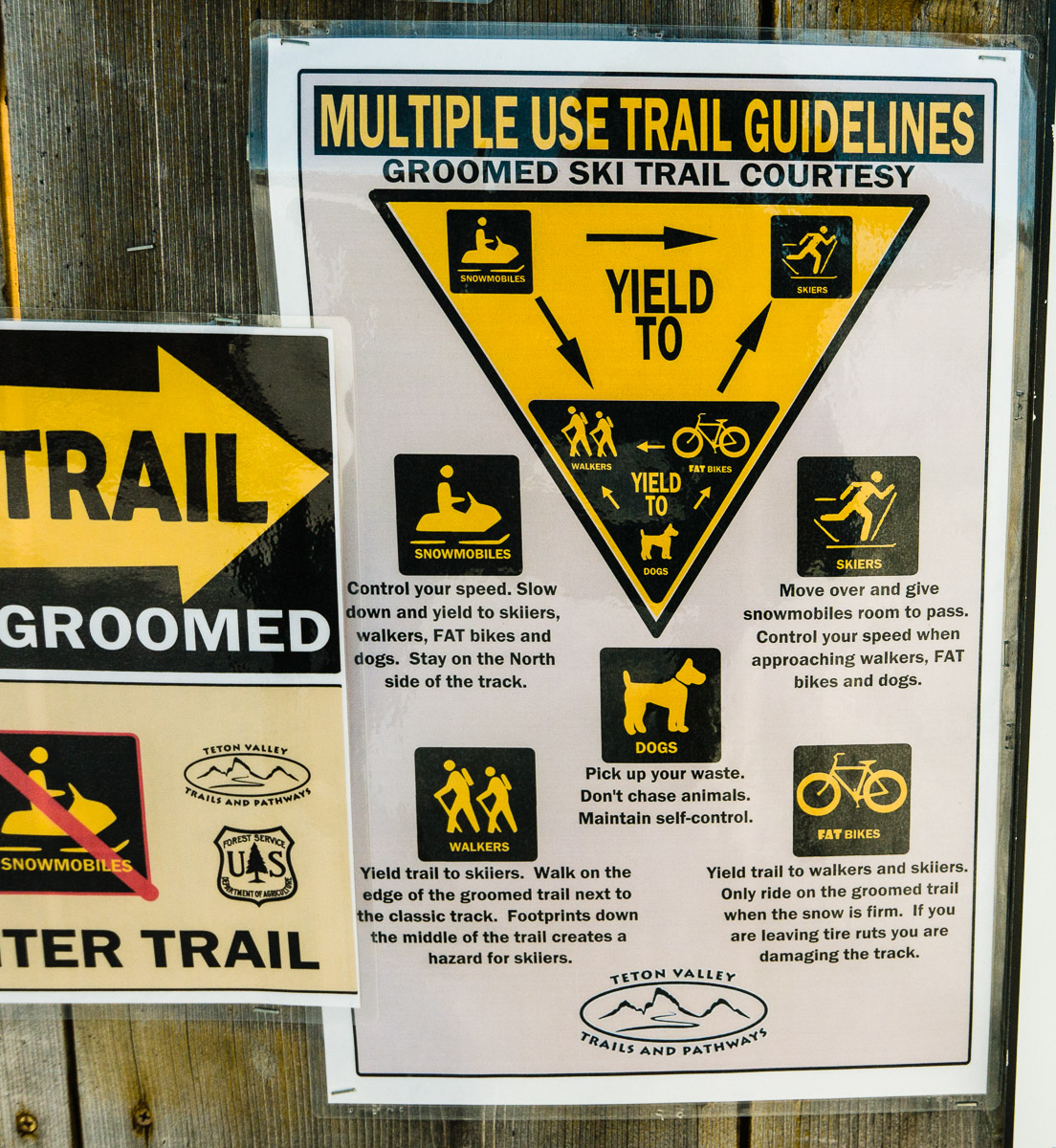 On January 10, 2012, fat biking was officially allowed and promoted on Grand Targhee’s Nordic Trails. The system has a great mix of climbing and level terrain and provides nine miles of gorgeous views.

While Andy bombed the descents and flew around the curves, he reminded us to first watch for skiers. No worries for me, I was too busy gaping at the views to descend at speed.

At the end of the Nordic tour, we continued to the the Jolly Green Giants singletrack. The singletrack is groomed by Andy, on a snowmobile pulling a roller groomer. He explained that there is a lot of potential for more winter singletrack, but that for the past two years he has been the only groomer. Staying on top of grooming the annual 500 inches of snow when it takes forty-five minutes per lap and requires 3-5 laps per grooming session is extremely time consuming. Andy has plans to double the singletrack mileage from four miles to eight next year, but that is dependent on acquiring more user-friendly grooming equipment and some additional manpower. Since he works full-time as Events Manager, the mechanical and human help is necessary. The Jolly Green Giants trail is a joy to ride as it switchbacks up to an open viewing area before plunging down the other side. 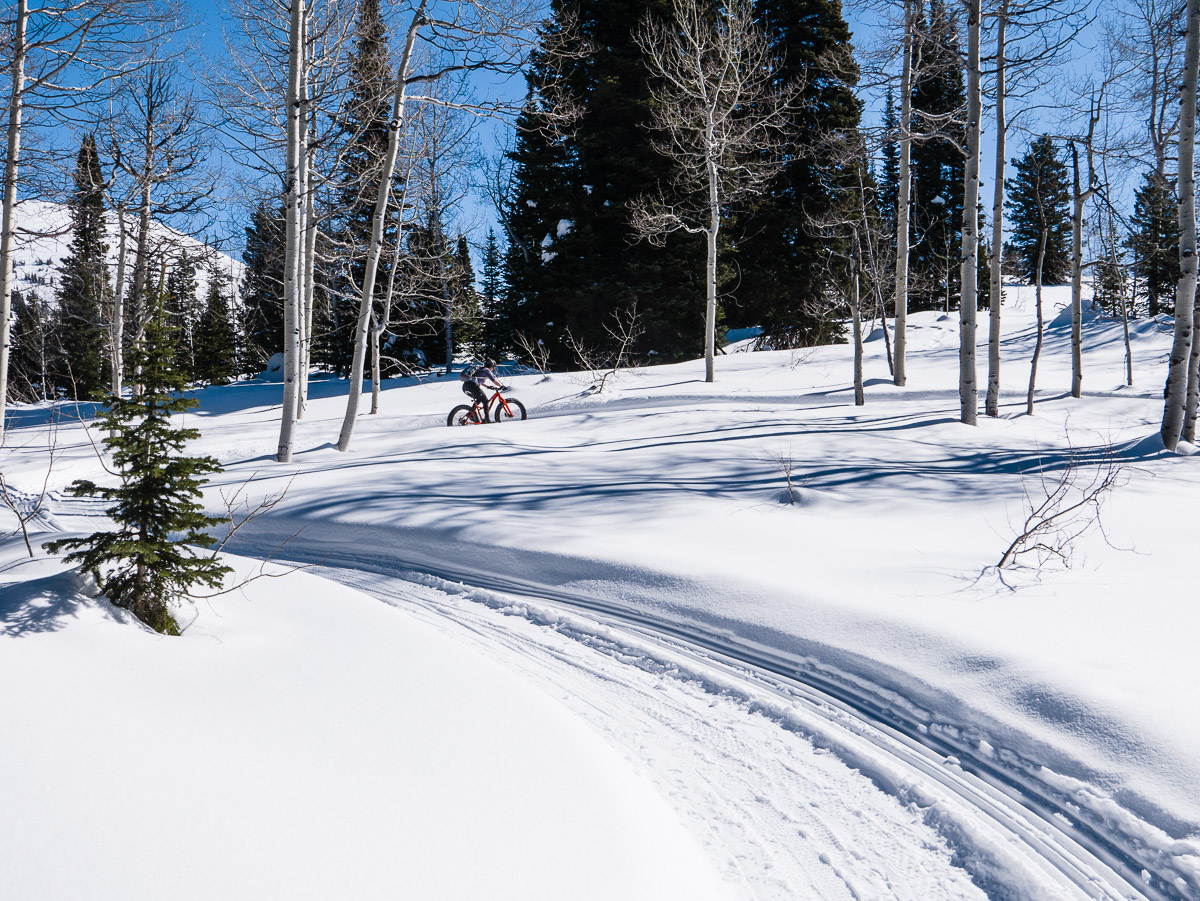 While the open area is beautiful, it frequently drifts in, requiring hand shoveling to keep the trail open. We took Andy’s suggestion of doing an out-and-back of Jolly Green Giants, which provided a fun descent back to the resort’s base area. We rode directly to the Trap Bar & Grill’s deck for a relaxing lunch accompanied by some Grand Teton IPA.

As we watched skiers on the slopes, I asked if lift-served fat biking is in the future. Andy explained that most of the terrain is far too steep for fat biking, but that he has every intention of getting bikers access to a doable lift-served 2.7-mile downhill green run. He mused that it might happen as part of the 8-9am “Early Tracks” option that currently exists for skiers. Stay tuned–my bet is on next year.

Dinner at the Branding Iron was a perfect ending to the day. Wild Mushroom Risotto and Pinot Noir for me, Sea Bass and Black IPA for Scott sent us back to the Teewinot Lodge sated and ready for sleep. The Teewinot is a convenient, cozy, quiet lodging option that is within a few minutes walk to dining, skiing, outdoor pool, and hot tub.

Here’s the deal: not everyone skis, not everyone wants to ski, and lots of people like to mix it up. Some people rent fatties and ride in the morning, then ski all afternoon. Scott and I love snow and we love to play in it, whether on snowshoes, nordic backcountry skis, or fat bikes and now we’ve even tried downhill skiing. Why choose just one? Winter is long enough to try it all!

Click here to read about fat biking in the Big Holes and Teton Valley.

Nancy Anderson
I've been a cyclist my entire life, but started mt biking in 1992 when I bought a used Schwinn KOM from a friend. I started riding the ski trails, 2-track & fire roads of Northern Wisconsin on my mtb & the mt tandem that my husband, Scott & I bought. Once CAMBA started building singletrack, we were in heaven. We developed new riding skills alongside the development of a great trail system. My students & I built a 5K singletrack trail in the school forest & my husband & I became active trail volunteers. We started mt biking in Colorado 10 years ago & are still learning new skills.

Repair
Quick Question: Any Tips for Removing a Stuck Pedal?
Advocacy
Trail Agents from Mountain Bike Orgs are Taking on the...
Repair
MTB Lube Theory: Which Oil or Grease Goes Where? We...
Beginners
What is the Noisiest Part on Your Mountain Bike?
Subscribe
Login
Please login to comment
1 Comment
Most Voted
Newest Oldest
Inline Feedbacks
View all comments

Great article! I love Targhee! For a powder skier, that’s as close to nirvana as it gets. It’s great to hear they’re putting similar effort into the mountain biking. The area looks to be positively prime for both activities.