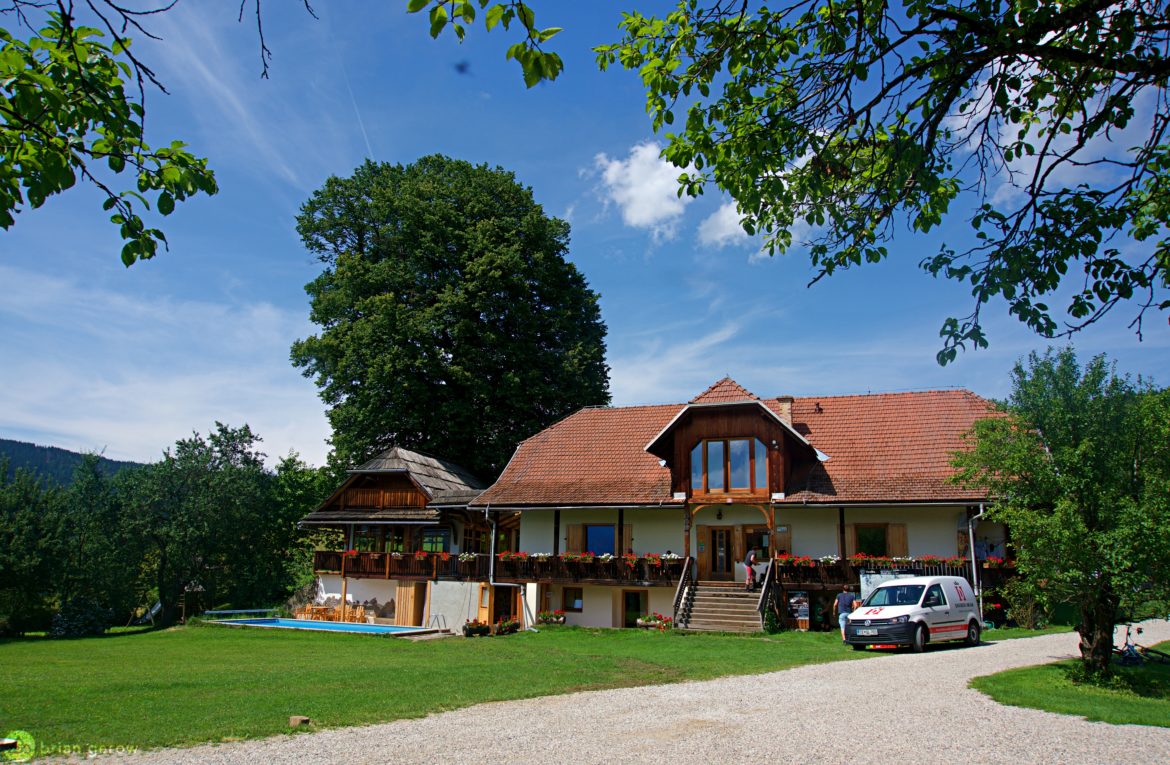 It is on rare occasion that I am deeply inspired by another human. I typically use the adjective, “inspiring,” for someone who is creating rather than consuming a life, and giving to others more than receiving. On a recent tour of Slovenia, I was fortunate to spend time with Anej Štrucl, a young fellow who embodies the sort of creativity and spirited stubbornness that I read of those we called “inventors” when I was a kid. He not only works harder than nearly anyone I have met, but he follows his bold ideas no matter who is laughing. Anej chases dreams to fruition with a refreshing breadth of care and compassion for the communities he is part of, and his work is backed by his family and that larger community around him. This story isn’t about Anej, but much of it wouldn’t have happened without him. 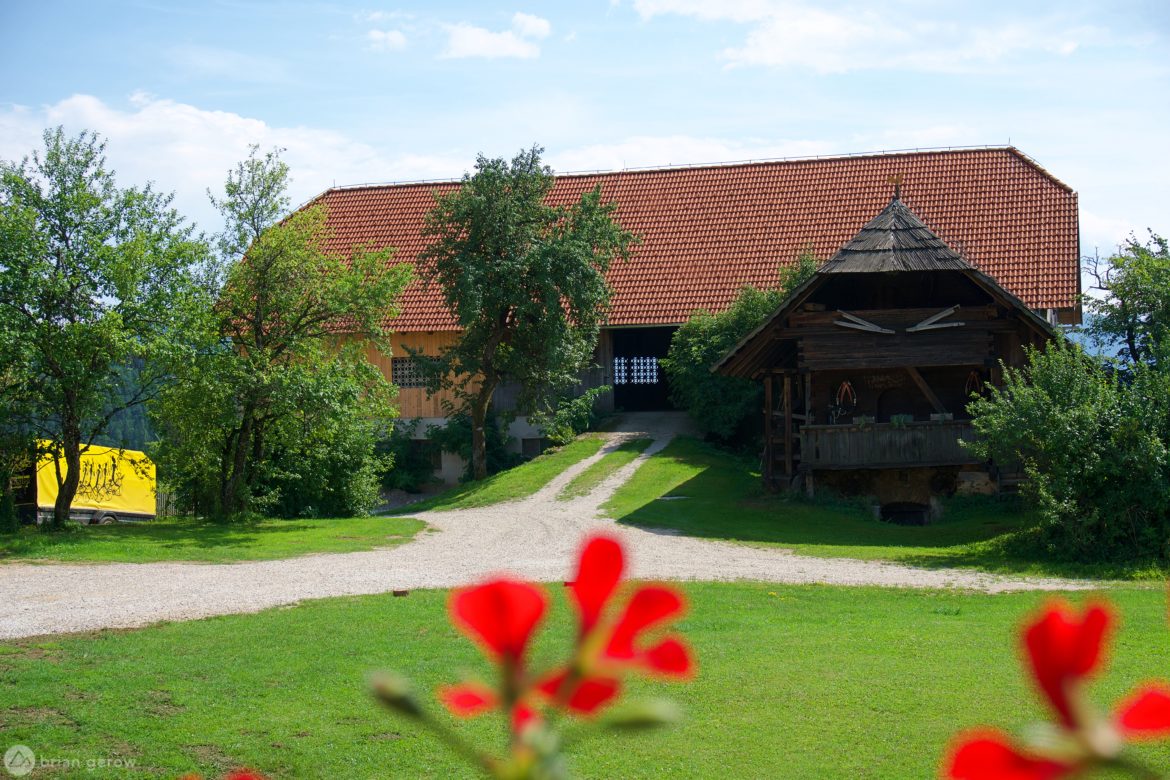 The Štrucl family have created an inviting hotel in the mountains of northern Slovenia, pretzel wrapped it in beautiful singletracks, and built a trail descending the layers of an abandoned lead mine, among other impressive projects. Before digging into the trail details, here is a glimpse of why they are such an inspiring group of humans.

The farm that the Štrucls purchased eleven years back plays host to a maximum of 26 guests indoors, with additional camp spaces and outdoor dwellings for the tent/van-life lot. While there is room in the house for additional guests, the Strucl’s prefer to keep their farm population small to be sure none of their guests is treated as a number. They live at the farm, raise their children there, grow most of their fresh vegetables in the back yard, and share the home with passionate mountain bikers from around the globe. When they find themselves with more bed requests than they have space for they send guests to one of two neighbors who also run B&B’s.

The community thoughtfulness of this crew extends into the trails they dig, and the way they interact with nearby farmers. Anyone is allowed to ride on the 26+ kilometers of singletrack they have built on the hillsides around the farm, and riders can hire Anej or his father Dixi to show them around. They don’t allow shuttling on the roads that pass by neighbors’ homes, and have instead created a gradual switchbacked climb in the trees. Their aim is to build a sustainable family business, and a necessary component of that is to consistently consider how their decisions affect the people around them. 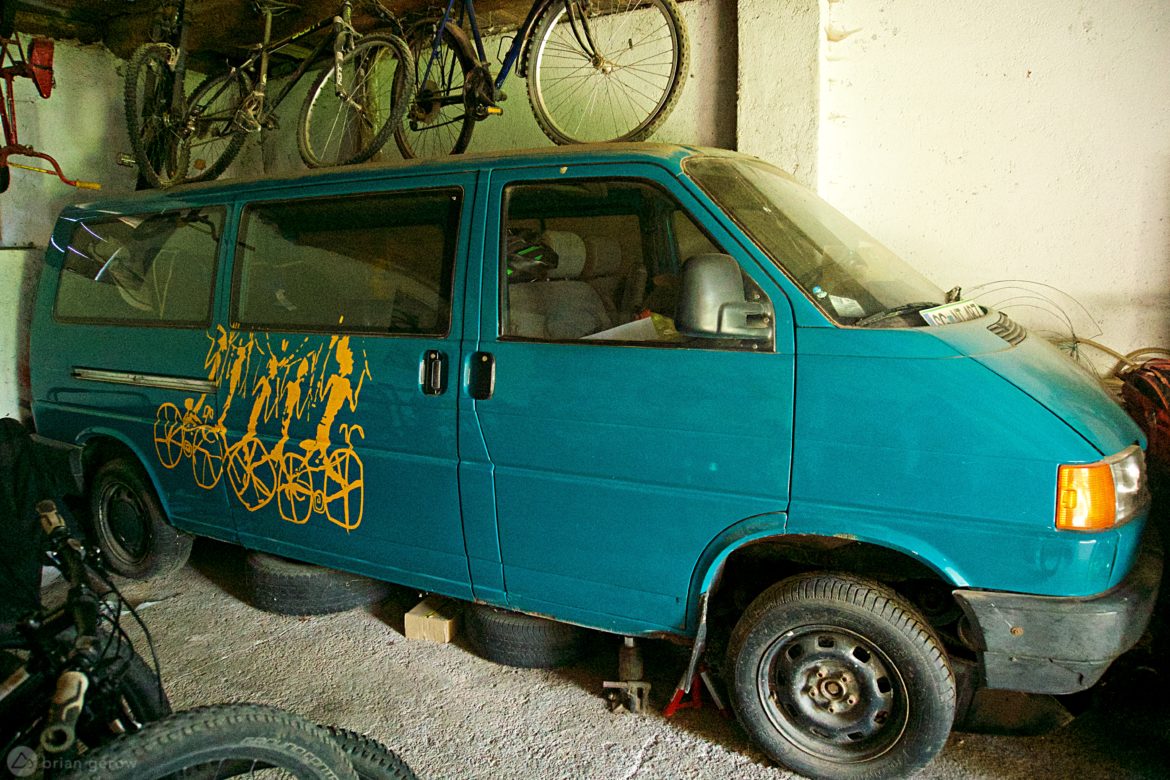 When the Štrucl clan arrived at their farm in Jamnica (pronounced Yamnitza in English) there were no mountain bike trails to speak of. The few fire roads and old walking paths between villages allowed them to kick off their initial MTB resort, and from there the digging commenced. Some of the current trails utilize those former walking paths, some are newly dug by hand, and all are heaps of fun to ride. 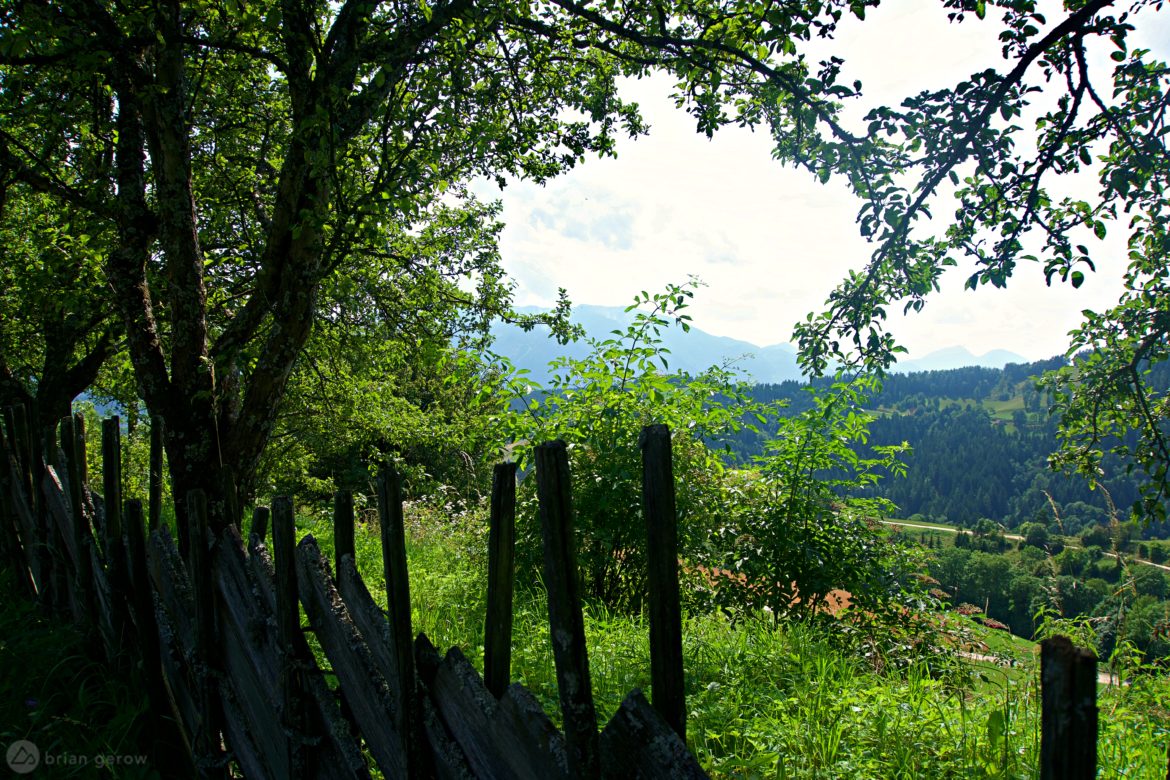 The soil in Jamnica is characteristically rooty, and it’s clear that Anej and his trail crew like to ride natural trails with tricky off-camber descents. Tricky enough, in fact, that he convinced Chris Ball to bring an Enduro World Series race to his hillside tracks in 2018, and the race will return in 2020. Half of the stages that fill the two-day event are in Jamnica, and the other half are in Petzen Bike Park, just across Slovenia’s northern border with Austria. Offering sustained full-throttle rips on either side of the border, the area makes for an onerous weekend of racing.

The Black Hole Trail, inside Mežica Mine

“We’re all blood underneath, and mountain biking is dangerous,” Anej said, as we were about to ride the 11 kilometer trail that he and his crew built through a former lead mine. The 20-story mine is a maze of over 1,000 kilometers of tunnels through a mountain near the Štrucl’s farm. It was once the workplace of a few thousand villagers who lived near the various entrances around the mountain. The mine supplied one of the most successful car battery factories in the world, strategically situated in the valley below.

In order to ride the Black Hole trail, you will need to hire Anej to guide the journey, strap yourself into as much protection as you would wear to ride double black lines in a new bike park, and bring a simple headlamp. While there are no lights in the mine, the brightly colored stones that make up its ceiling and walls reflect light naturally, making high lumen counts unnecessary.

The ride begins with a 50-meter walk into the mine to allow your eyes to adjust, while Anej shares history and interesting facts about the piece of earth you are entering. At the 50 meter point, he asks guests to put their bikes down and listen for a bit. It’s a safety meeting, and it’s important. He opens his bag and carefully displays its contents for everyone to view. He has a map of the mine, an emergency cell phone, a gigantic first aid kit, and instructions that are written in a number of languages about what to do if he crashes and is unable to continue. That last bit is critical. With over 1,000 kilometers of tunnels throughout and only one person who knows the way to the exit, understanding what to do if he is unconscious might just save a life. Fortunately, none of the more than 300 riders who have gone through the mine has had to use Anej’s spare phone or directions, but it’s nice to know that he has considered the blood beneath our skin and the more dangerous aspects of our thrilling sport.

After the safety briefing, the ride continues to roll flat across the 8th level of the 20 story system for another 2.5 kilometers. A slick set of trolly tracks line the floor, and the walls occasionally open into massive caverns where the miners followed veins of lead through the rock. Anej stops several times to tell tales of miners, heroic and otherwise, and to draw a vision of what their sixteen hour shifts looked like by lamplight. His stories come directly from the miners who helped him design and navigate the trail, and they are as oft fascinating as the ride is unnerving. I won’t spoil any more of the narrative therein, but I highly recommend some 2-wheeled history lessons in your future.

Once you reach the Black Hole descent, Anej will stop again and give you a chance to look at the trail so you know what you’re rolling into. His dig team did their best to make everything as rideable as possible, blasting rock with the local cave rescue squad to level things out, but the resulting trail is certainly one for folks who are confident in their descending skills. All of the steep and spooky sections of the track would be fairly easy to ride outside, but with stone walls to maneuver through they are nothing short of exhilarating in the mine.

If you would prefer a more relaxed mine tour, there are guided rides that roll through one level of the matrix, and includes similar history and geology lessons. Alternatively, visitors can add a little diversity to their lead-mine excursions with a kayak paddle through the flooded lower levels, followed by a tour of the museum and geological exhibition.

Petzen Bike park has gained popularity over the past few seasons, both for its position as an EWS event center and for the resort’s massive 11 kilometer long “Flow Trail” descent, designed by none other than flowmaster Diddie Schneider himself. The Austrian side of the EWS event takes place on two tracks, titled Thriller and EWS Trail respectively, with new tracks planned for 2020.

Check out this video by the Cube Actionteam from the 2018 EWS race. Anej mentioned that the 2020 course will have far shorter liaisons, and longer descents.

All of the natural trails on Petzen mountain were built by Anej and his crew, snaking across Diddie’s Flow Trail like a pile of dropped shoelaces. The Jamnica crew doesn’t mess about when they dig a natural track. These trails have wall-steep descending bits, uber roots, palpitating compressions, and brutally deceptive little climbs peppered in to keep everyone honest.

Anej digs with a crew of 4-5 trail builders, and prefers to keep the crew small so that no one has to play the boss role. They all discuss how things should go, read the land, flag the trail, and dig together as a team.

Petzen mountain offers roughly 22 kilometers of descending on three distinct trails, and more being built each season. Alongside the growing number of tracks in Jamnica and the trails scattered across every hillside in northern Slovenia, there is enough fun to be had to justify a two or three week vacation in the area.

Hit up the good folks at Bike Base Hotel Koroš for all of your sleeping, eating, and trail guiding needs. For any other travel planning queries, check out the official Slovenian tourism page.