The ruffled fringe of mountains along the top of the Italian boot appear arbitrarily drawn as they interlock with the indistinguishable French side of the border. Scrawled between the Mediterranean Sea, and north to Mont Dolent in the Swiss Alps, the largely invisible border is dotted with beautiful alpine parks and large expanses of steep and stalwart nature. Amidst the ever-corroding peaks is a storied assemblage of ski resorts that swap costumes in the summer to become bike parks.

One of these lush party slopes, located in the former railway-construction town of Bardonecchia, Italy, was home base for the snowboard events at the 2006 winter Olympics. Today the westernmost Italian city subsists largely on tourism, and they have collected a broad assortment of activities to lure adventurers. Naturally, I focused on mountain bike adventures.

The Bardonecchia Bike Park offers all the features one would expect in a modern mountain bike center. Two chairlifts on either side of the park ascend to separate parts of the mountain, while gravel roads and XC trails bring riders to the top the old-fashioned way. The mountain is ribboned with over 400 kilometers of trails, each signed with length, elevation, and an estimated level of difficulty. Skills parks for kids mark the bottom and top of the eastern chair, and I enjoyed watching a handful of groms chasing their skills instructors down the XC and DH tracks on my recent visit.

With respect to some current and former DH World Cup tracks in the nearby mountains, the slopes at Bardonecchia are arguably the least steep among the bike parks I have ridden. The gravity trails are on the shorter side, averaging typical DH race times of 7-9 minutes for a ripping descent. Jumps are all rollable or have well-built alt-lines, and the majority of the table-tops were easy to clear at a fairly chill pace. The classically machine-built trails are not the sort anyone would call “natural”. My lasting impression of the park is that it is a fantastic spot to practice and learn to ride better and go bigger, before hitting more technical slopes in the Alps. 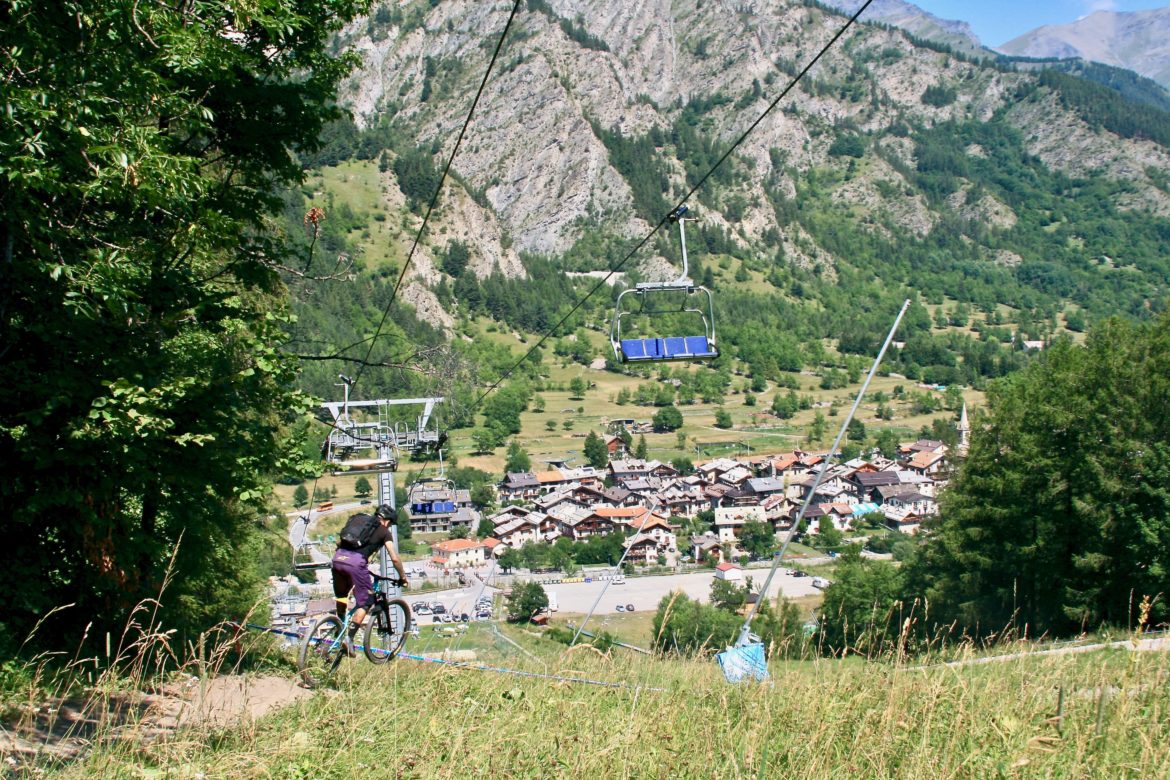 I prefer trails that feel more natural and require that I create flow rather than expect it, but I had a great time with the short descents and non-existent lift lines in Bardonecchia. I was able to do 16 laps in one day, trying out different lines and sessioning pieces without having to push back up the track. I am not so confident in the air, and it was quite a treat to hit the same jumps several times and push my comfort level up and out. No matter how relaxed you feel on freeride features or DH tracks, with enough speed there are places to scare yourself all over this mountain.

Most of the gravity trails have a similar character, with wide-open berms, flat camber on the straight sections, tame wooden features, and uncharacteristically smooth flow for the region. The one exception to that rule is track 14D, which can be accessed by turning left at the top of the eastern chair, in Pian del Sole. This less-traveled trail tilts to a steeper pitch at several points, and the ruts from frequent summer rain blasts are not groomed out nor filled in. Though it is no longer than the others, 14D demands more attention and a looser riding style than any of the other tracks. For me, it was by far the most fun run of the day, and I recommend checking it out as you survey the mountain.

Eats at the mountain

Like most any mountain town in Italy, you will find no shortage of delicious cuisine to wake your tired head after a long day of pumping rollers. With its close proximity to France, typical Italian dishes will be a little more buttery than oil-rich, and pastries are shaped differently and called by different names than in other parts of the country. Fortunately, top quality ingredients and passionate care for food are cultural necessities no matter where you are in Italy. You will undoubtedly find something well worth devouring after a hard ride in the sun.

Brandon Belfield, she has to wear the brace for a few months because she had a big get-off in the EWS race in La Thuile, resulting in two compression fractures. She hopped over the bars and essentially sat down really hard. She found some sweet hiking in Bardonecchia to pass the time.

I’ve enjoyed your articles. I’m also located in italy, based out of Milan and ride a lot on the Italian/Swiss border (normal stomping ground is Como/Ticino/Valtellina ). Hit me up if you’d like to shred sometime.