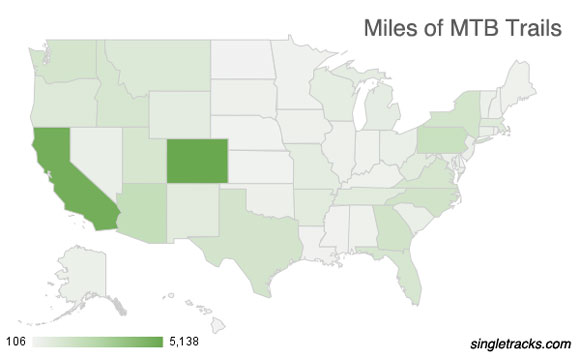 We had a lot of fun with the mountain bike ownership analysis a couple weeks ago and now it’s time to delve into some trail stats. Ever wonder which US states have the most miles of mountain bike trails? Or which states have the lowest trail use densities? We did–and here are our findings.

The first chart above shows raw trail mileages for each state. At the high end, Colorado has 5,138+ miles of bike trails while tiny Delaware has just 106+ miles. I say “plus” because there’s no way every MTB-legal trail in the US is in the singletracks database but we can use it as a good approximation, especially when comparing states. Obviously California and Colorado stand out but there are a couple other interesting trends to note.

Ok, so western and mountainous states have more trail mileage than flat, eastern and mid-western states but what about average trail lengths themselves? After all, the most popular trails and trail systems seem to be those with a lot mileage to choose from. 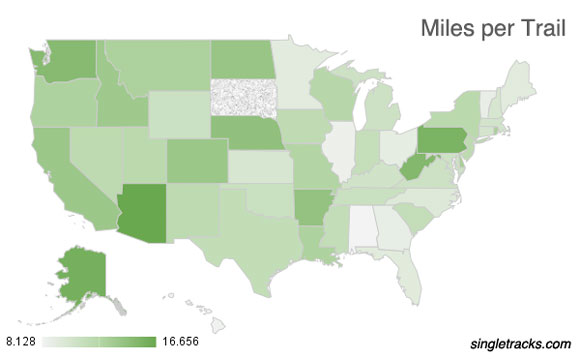 For this chart we’ve discarded South Dakota and DC because our trail sample in those areas is so small (and each happens to have one long trail that skews the results). Barring those two states, the miles per trail metric is fairly consistent across the US. The southeast seems to have shorter trails on average while Pennsylvania, West Virginia, Arizona, and Alaska (unsurprisingly) have mostly longer trails. There’s clearly a trend toward longer trails in the western states as well.

Speaking of long trails, it’s interesting to see where the official IMBA Epic trails are located throughout the US. 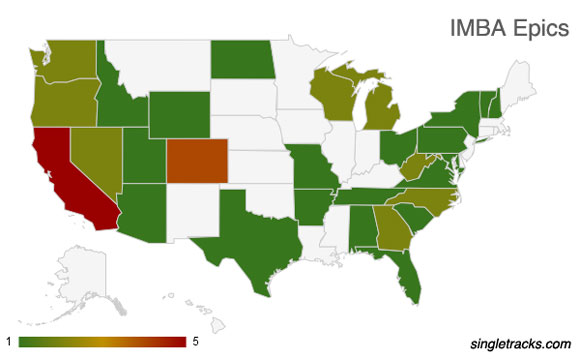 This chart is shockingly similar to the first chart showing overall trail mileage for each state. California and Colorado have the most IMBA Epic trails–and also the most mileage from the first chart. Using mileage as a good gauge for the number of IMBA Epics in a state, Montana seems to have been overlooked on the IMBA Epic list. As in the mileage chart, it’s clear that states with mountains tend to have the best mountain bike trails.

Ok, so if you don’t live in one of the states blessed with miles of epic trails, you’re probably ready to start planning your trip out west or at least to a state with mountains. But which state has the least crowded mountain bike trails? 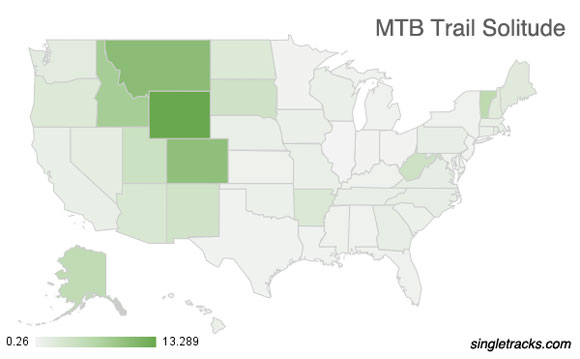 Our final chart shows trail mileages normalized for state populations. After all, California has a ton of mountain bike trail but there are also a ton of local riders. It turns out the Rocky Mountains offer your best shot at having a trail all to yourself (or at least running into the fewest trail users). On the east coast, Vermont and West Virginia are also good bets if solitude is your thing. Of course this doesn’t account for the tourists which will affect actual trail usage densities (think Slickrock in Utah).

Now it’s your turn–which map do you find most interesting? What other trail metrics should we have mapped?

Great statistics! I could have told you that Montana would be one of the least-densely populated 😀 Such a vast region and such a low population! I loved the solitude when I lived out there. Kind of surprised to find Colorado close by in that same chart, but I guess with that many miles of trails people will get pretty spread out.

The only problem I see with that last image is that it is normalized for state population size and not for the size of the mountain biking population. For instance, Montana just passed the 1,000,000 population mark only a hand full of years ago, whereas Colorado has many millions on the front range alone.

Also, Colorado is a much more athletic state than even some of the other Rocky Mountain states, like Montana. (I’m comparing and contrasting these two as they seem close on the last chart and I’ve lived in both). I would say that the difference in mountain biking populations in CO VS MT would be even higher than the actual population ration of CO VS MT, thereby bringing CO’s trail-solitude rating down and Montana’s up.

But again, that’s just my guess! 😉

Thanks so much for sharing these stats. I totally geek out whenever I see interesting charts and diagrams with cool information… totally up my alley.

Also, the map of IMBA epics was very interesting. Having grown up in Wisconsin, I thought it was interesting that WI and MI kind of bucked the trend by having a relatively high concentration of Epics despite a lack of real mountains. Of course, there are the deep forests of the Northwoods… but they just seem breaking the mold a bit 🙂

Ive been wondering what effect all the new bike parks (ski resorts) will have on trail usage-?
Probably too early to tell as the USFS has just eased regs on the existing ski resorts to allow more of them to begin summer operations. I realize this will get more new people into riding, which is good, but am wondering if normal x-country trails will see a decrease in riders as they migrate to the parks.

AK Dan – I don’t think so. Fact is, most of us live nowhere near a ski resort. XC riding will never die.

@Dustin Gaddis, Fact is, most people that don’t live in the South DO live pretty close to a ski resort. You’d be surprised how many there are. (just check out Snowtoit.com). The problem is, most of them don’t provide lift-served mountain biking… yet…

But I agree, XC riding will never die out, because biking is first and foremost a mode of transportation, and using trails to get out into some of the wilder places will always be appealing!

That said, I don’t think AK_Dan was asking if they’d die out, just if there’d be a decrease.

As for solitude, the last time I rode Monarch Crest we got an early start to beat the shuttle. We saw exactly one other rider, going the opposite way. We saw I think two more riders on Rainbow .. and that was it.

@Dustin Gaddis, for me the choice is *which* lift service bike park to go to .. decisions, decisions… 😀

@mtbgreg1, good point about the number of mountain bikers in each state (specifically the relative % of the population that mountain bikes). In fact I prepared just such a map but decided to hold off on sharing that one until a later post…

I do wish there was a bit more color contrast on the sliding scale though. I have a terrible time distinguishing shades of colors (it’s why I stick to mostly black or white clothes :D)

I’ll be moving to Montana in about a year or so. It looks like I’ll have the trails to myself!

@trek7k, cool, looking forward to it!

@Jared13, where are you moving in Montana?

I need to ride a few more trails in the Midwest before I get out there though. Hopefully I can cross everything off my list this summer 😀

“Of course there are plenty of explanations for this: western states are larger (an area-normalized chart confirms this) and western states are also not as densely developed as eastern ones.” Very true. Now add to that the fact that there is a much larger proportion of public lands in western states. If you were to show a map of USFS and BLM lands, you’d see that also highly skewed to the west, thus more places to ride.

The low population density and even lower MTB population density in some places tend to underrepresent some western states in terms of biking trails/mileage. Take a more populated eastern state and you’ll find most every legit bike trail documented. On the other hand, there are many hundreds of MTB trails in a state like Montana that aren’t in the Singletracks Database. I’ve ridden over a hundred trails in Colorado and most of them were in the STDB by the time my knobbies found them. I’ve ridden 26 trails in MT and I entered 24 of them in the STDB. I’m sure most of them woulnd’t have found their way into the STDB had I not ridden them myself. Had I not been working 60-70 hr weeks for most of my two years in Montana, I could have easily entered many times that and still captured only a small percentage of what was abailable. In addition to low population density, outside of Bozeman, the proportion of people who MTB is pretty small in Montana. The culture there just doesn’t promote it much. First of all, much of Montana lacks excess disposable income; wages are low and often cover only the basic cost of living. What disposal income there is usually goes to other pursuits like fishing, hunting, snowmobiling, etc.

As for the parks, you’re not just limited to ski areas. More and more municipalities are building skills parks as part of their city/county/regional park systems. Even small towns like Green River, Wy have large skills parks these days. Also, think Ray’s.

Maybe we need to plan a Montana Road Trip 😀

Skibum has a good point about Montana: when I lived there probably about 90% of the trails that I rode weren’t in the STDB until I added them.

Trails in the west simply are NOT crowded, espically mountain bike trails. Here in Tucson with over 450 miles of singletrack the only places I find at all crowded are hiking trails high in the mountains on hot summer days. There is NO trail in the west I’ve found too crowded, even when running my dogs, except in national parks.
To me it’s simply another reason to open wilderness trails to bikes.
I did add a trail to Montanas list, hope to experience it again some day as it was a real treat for a desert dweller. But we have so many great trails here in Arizona it’s great in winter and the taller mountains make summer riding sweet, too. Flagstaff may not be an IMBA epic but it is epic. IMBA is planning on making Prescott a ‘ride center’ meaning more trails will be built there with IMBA help and what’s there already is sweet.

@skibum
I noticed WY and ID seemed to have a lot of bike parks. I can’t wait!

@abegold
I think the only “crowded” trail I hit in Tucson over winter break was Sweetwater, but I went back closer to evening and then early the next morning and I had the trail to myself. I met only 2-3 other riders on most trails and there were a few that I had completely to myself. I was very happy. I thought they would have been more crowded since all those blasted tourists were down there for the holidays (myself included ;))

The west also has more public land. How many of these trails are really jeep trails, logging roads, etc.

Montana road trip pending–My eldest, God bless her soul, has decided to attend Montana State, which gives me a built in excuse to travel there on a regular basis. First trip will be to drop her off for her freshman year. Can’t wait. Nothing beats Big Sky Country in late August! Looking to hit a few big rides I couldn’t get to when I lived there.