After two days of biking in town, we decided to head for the hills and ride the Mid-Mountain trail.  This trail, which used to start at Park City Mountain Resort, has been extended all the way to Deer Valley.  You could easily park one car at Deer Valley’s Silver Lake Lodge, start the ride, and finish at The Canyons.  From there, you could either ride back, or have a second car available.

As you can imagine, there are multiple ways to ride Mid-Mountain, and we chose the easiest: a shuttle to the top of Guardsman Pass.  From there, we dropped down Scott’s ByPass and then, instead of heading up Puke Hill towards the Wasatch Crest (which you can do and then take Pinecone Ridge), we headed down into the Park City Mountain Resort (aka PCMR) via a steep downhill double track trail.

For our shuttle, we used the Double D’s service.  Dennis is a great guy who runs all kinds of shuttles, but he’s happy to pick you up just about anywhere in Park City and take you where you need to go.  For information on his rates, phone number, etc., click here.

We followed the Shadow Lake trail signs around Shadow Lake to a doubletrack that goes near Jupiter bowl and lift.  There’s a cool old mine here; I’ve skied here and never noticed it before!  From there, we headed for the Powerline trail.

The ride thus far had been up and down.  For a desert biker, riding through the trees is always a thrill, and riding around a ski resort holds a special interest for me.  Ski resorts look so different than regular mountains… it’s like they’re naked.  Runs are still clearly defined, but the lifts are empty and still. The wooden ramps leading to lift chairs are visible, and roads you would never know existed in the winter pop up all over.

Eventually, we ran into an intersection with the Pinecone Ridge trail.  The Mid-Mountain trail has been rerouted in the past few years, so if you’re expecting to head up and around Iron Mountain, you’ll be surprised.  The trail now goes in front of the mountain, and includes much more downhill than before.

Don’t even think of attempting to find and ride the “old” trail.  It’s still visible right at the intersection mentioned above, but just trust me: don’t try it.  The new trail is really a lot of fun.  Locals say it’s “rocky” and “jumbly,” but we found it to be pretty sweet.

We passed the “Warning:  There’s nowhere to get off this trail until you reach The Canyons in 11 miles” sign, and kept right on going: downhill, around curves, through the trees, all the way to Red Pine Lodge at The Canyons resort.  Of course, you’re still not through.  This trail goes on and on and on.

We eventually reached a jeep road, and a few different options presented themselves.  We could continue on Mid-Mountain as it wound its way through more of The Canyons to another ridge, or we could take Holly’s trail, and hopefully descend to our condo a little quicker.  At this point, we’d been riding for over four hours and over 20 miles (according to my Endomondo app).

We opted for Holly’s, which turned out to be a long, super-fast downhill in itself!  We turned off for Ambush when presented with that option, and, at the end of Ambush, hit the jeep road for a fast descent to the main lodge, and on to our condo.  At the end of the ride, we’d gone 25 miles in a little under 5 hours.  Because we’d been prepared and because so much of it was downhill, we actually weren’t as beat as I thought we might be.  Starving, yes, but not too tired to enjoy dinner out with some friends.

Mid-Mountain is worth your while if you’re in Park City.  It’s a great way to explore PCMR and The Canyons, and, once you get to The Canyons, you can enjoy DH trails like Ricochet, if you so desire. There were plenty of awesome DH features around us, like wooden berms, ramps, etc., on various trails.  The views into Park City are pretty sweet too: 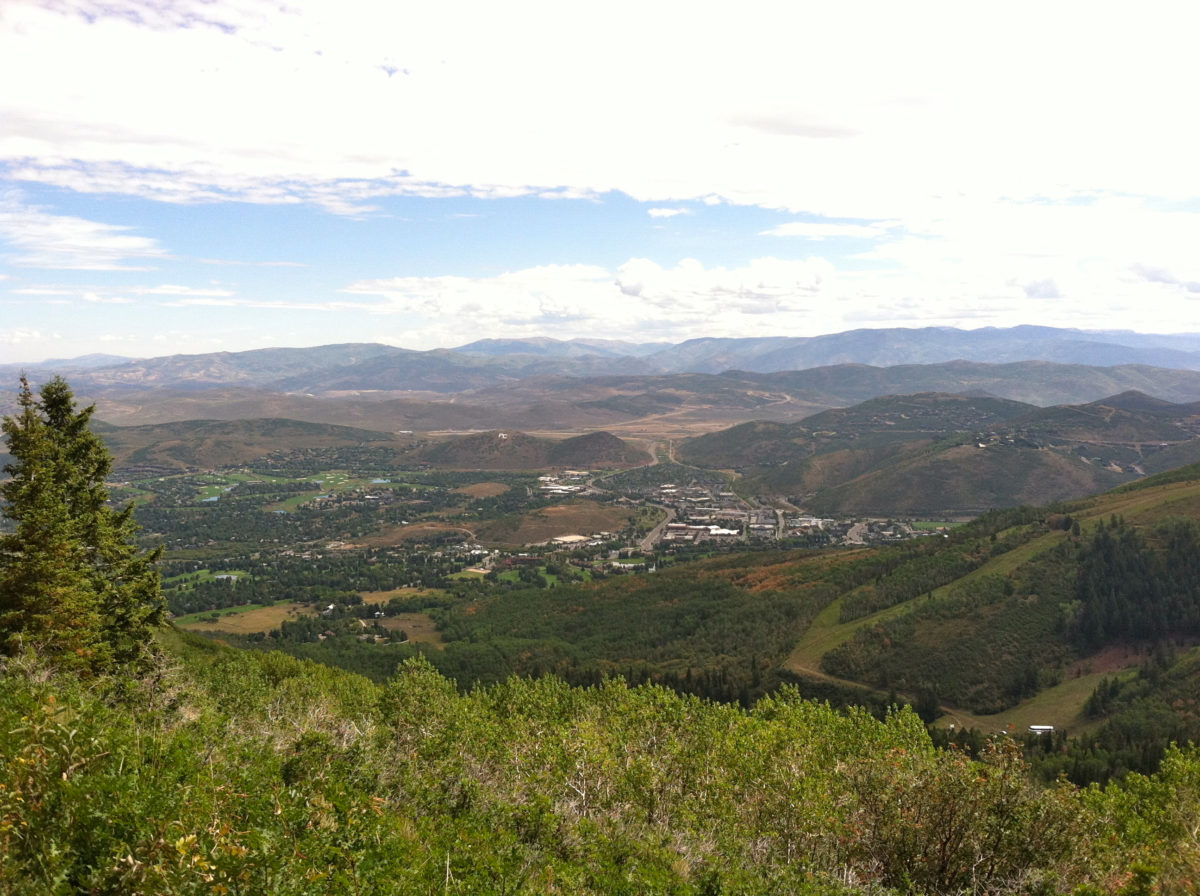 Overall, I think Park City is a great place to visit in the early fall/late summer.  Hailing from Grand Junction, technical biking is pretty common: we’ve got the Tabeguache trails, Kokopelli trails like Horsethief Bench, and Mack Ridge around us all the time.  What we sometimes miss is a chance to just climb without technical challenges, or fly downhill with nothing in our way but an easy switchback.  So for us, Park City is a welcome change.  If you go, don’t miss the free Saturday evening concerts at The Canyons or the Farmer’s Market there on Wednesdays from 12-6.  They sell everything from fresh pizza dough to eggs, and tons of produce.  You’ll need to refuel with some good eats after all that biking!

In the fall, it’s easy to find inexpensive condos on sites like vrbo.com.  We rented a one-bedroom condo at The Canyons resort, for what amounted to about $57/night.  It had a small kitchen, really nice patio for locking up the bikes, and plenty of space.  If you’re heading to Park City, I recommend using a site like VRBO to find a goo, inexpensive place to stay.

Your Turn: Have you ever ridden in Park City? What were your impressions?

Gear
Would You Rather Ride with No Suspension, or No Dropper...
Trails
Cuyuna and Pisgah Add New Trails, While Utah Gets a...
Progression
How to Ride Flat Corners on Your Mountain Bike
Progression
Sizing Up or Down Based on Riding Style Can Work,...
Subscribe
Login
Please login to comment
2 Comments
Most Voted
Newest Oldest
Inline Feedbacks
View all comments

I live pretty close to Park City and ride there fairly often. If you plan a trip here, make sure you do your riding on weekdays. Weekends are crazy busy, especially the Mid-mountain trail since it is used as a connector to other trails and it is close to many resorts. When I say busy I mean stopping every 100 feet to let hikers and other mtbers pass. To be honest I’ve never seen anything like it. You’ve been warned.

Now queue the retorts to ignore my warning so as to keep the tourist money rolling in! 😉

Oh you’re absolutely right! We rode down Pinecone Ridge on a Saturday and ran into a group of about 25-40 tourists heading up. Of course they were spread out so for about a mile we really were stopping every 100 ft or so. After that though we hit mid to Spiro and didn’t see nearly as many people as we thought we would.