You may have seen the recent video from Scott Bikes with Nino Schurter and his family playing on some sick trails in Tuscany, Italy. If not, it’s definitely worth 4 minutes of your time to see the current XC World Champ whip a long-travel bike around on tracks that his brother and father built.

Those hand-cut ribbons are part of an expanding Tuscan trail system in Massa Marittima, Italy. Folks visiting the trail system, located on the slopes of Monte Arsenti, will enjoy sculpted trails that were built by mountain bikers, traditional Tuscan cuisine, and guides and shuttles for hire from the same folks who built some of the singletracks. 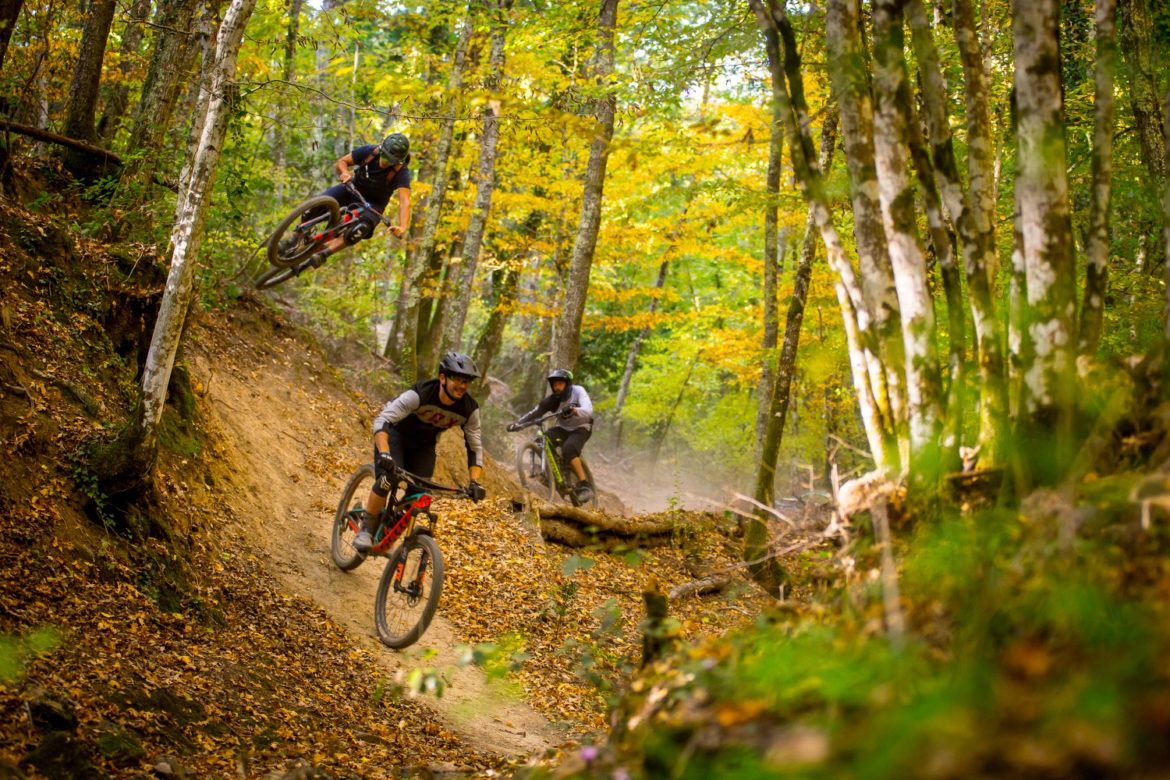 If you decide to stick around for a few days, you will want to check into Hotel Massa Vecchia (translation: Old Mass) where Trail Brothers staff have collected all of the pre- and post-ride amenities you could need. In addition to bike rentals, a workshop, GPS device rentals, and an onsite pump track, the hotel can arrange wine tours, thermal bath breaks, kite surfing, horseback riding, and all sorts of fun for kids.

When I dream of taking a vacation with my mountain bike, it looks like the photographs on the Trail Brothers Tuscany and Massa Vecchia websites. I recently caught up with guide and builder Francesco Guidi to learn more about what this magical slice of Italy has to offer.

Tell me a bit about your personal history with mountain biking.

I started mountain biking as a kid, at 10 or 11 years old I was riding some proper singletracks [instead of] just hanging around the city park. The father of one of my best friends at that time was the guide responsible for the Hotel Massa Vecchia so we were joining the guided tours as well and already [understood that] being in front of a group and guiding people around was something special, [and I had] the aim and the desire to be one of them one day.

Then at 14 or 15 years old, I discovered that [I could have] an engine as well while being on two wheels, so I gave up the MTB riding and started to do Enduro Motocross. The MTB was still a cool thing for me, so I kept watching all the famous races and videos and still bought MTB magazines sometimes.

Around 19 years of age, after a couple of big crashes and some local races, the motorbike was [less of a] “safe” thing for me. Riding 80km/h in the woods and not knowing what you can find after a turn or a fire road, like maybe a mountain bike rider, wasn’t good anymore for me, so I sold my last motorbike, bought a car, and took back the old Scott that was in the garage.

Massa Marittima is a tiny town, and more or less everyone knows everyone. I became good friends with Arianna and Alice, the daughters of Ernesto Hutmacher, founder of the Massa Vecchia Bike Hotel, and started riding with Ari, [just for fun] at the beginning. The [idea] was to start guiding for Massa Vecchia. From that time my actual job began. 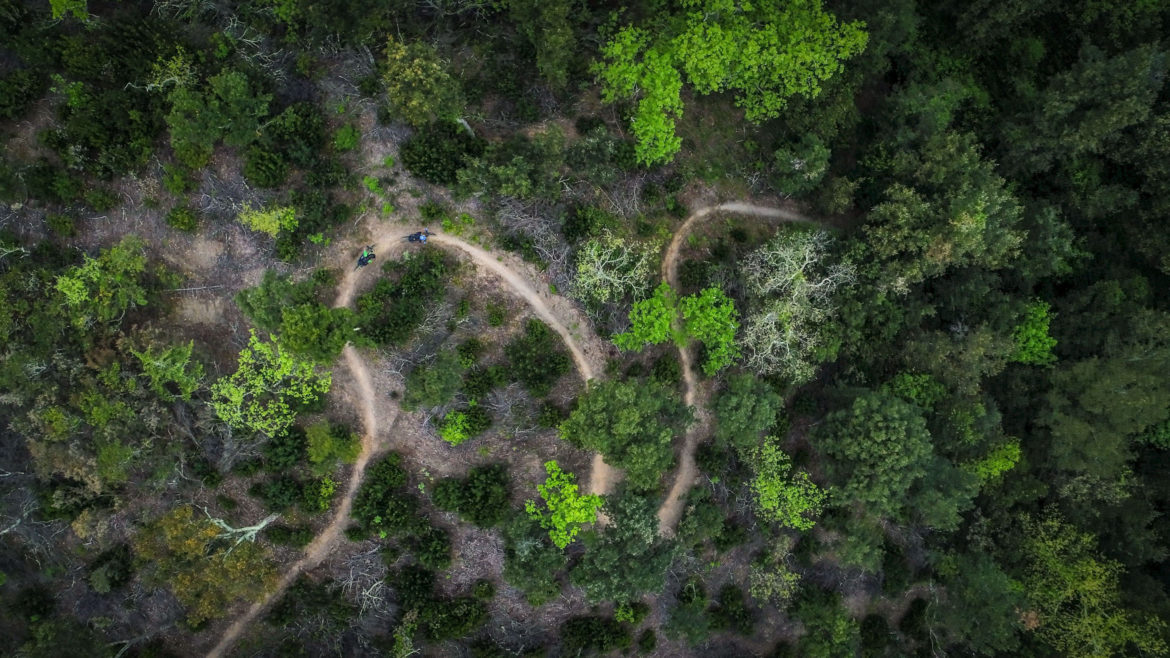 How did you originally become involved with Trail Brothers, and with the Massa Vecchia hotel?

More or less five years ago, we started this idea of creating a park, [adding to the trails] we already had, with a younger [vision of] MTB riding.

After few ideas and projects then we gave life to The Trail Brothers, [we needed to have a company that] was able to put together and communicate with different [entities] like private structures, organizations like Superenduro for organizing races, the municipality, etc. 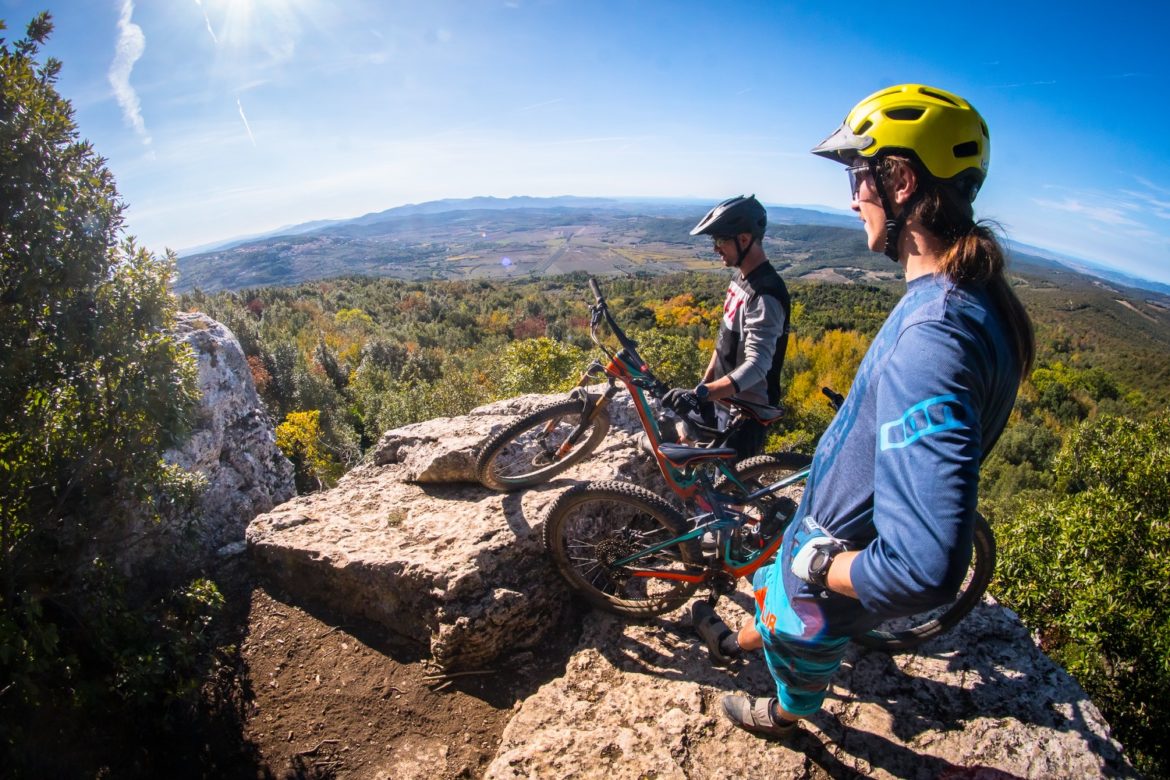 How did the Schurter brothers become involved?

Nino is almost a local here, he [has been] coming here for training since he was 17 years old. Ernst, the father, purchased a house here, [and Nino’s brother Mario] started to hang around with us and after a little while, started having really similar interests. They were automatically part of the crew. It was actually Mario that came up with the name of the crew [one night at a pub], inspired by a Blues Brothers song:

“Hey, guys, that’s the name, if they were the Blues Brothers, we definitely should be The Trail Brothers!!” 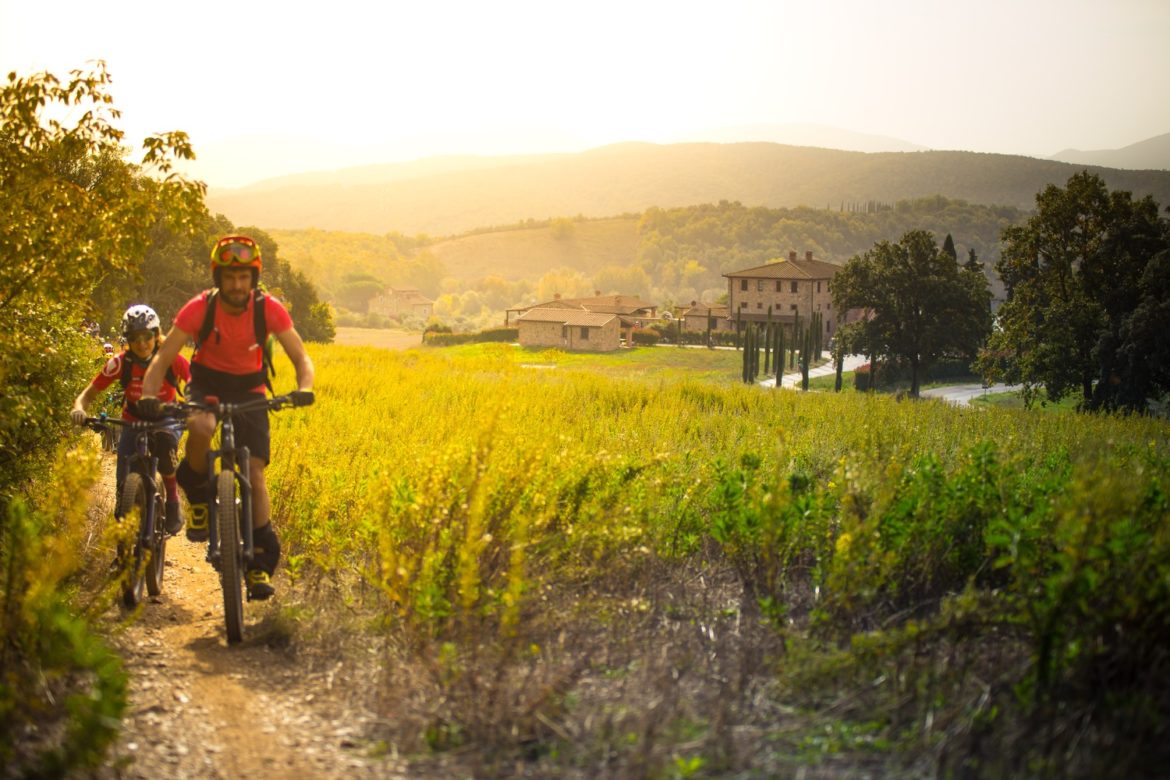 How did the relationship with Scott bikes develop?

Massa Vecchia has been a Scott Center for more than 20 years. Thomas Frischknecht fell in love with this place and joined the Bike Hotel Company, after a few winter training camps here in our area during his career. Since then the collaboration with Scott has developed year by year, with product launches and various testing.

What services do you all offer through the mountain bike guide and shuttle company? Do you teach skills camps?

Yes, we do offer various different guided tours for all levels and the shuttle services for our trail park. We offer skills camps as well, as we believe it is really important to learn properly on the bike, and as many new riders are starting to ride and enjoy the pleasure of [mountain biking], we think it is fundamental to learn the right movements, positions and the good way to shred with safety. [Just like you would take lessons] with skis or snowboard, for example, everyone should do it with the MTB too! 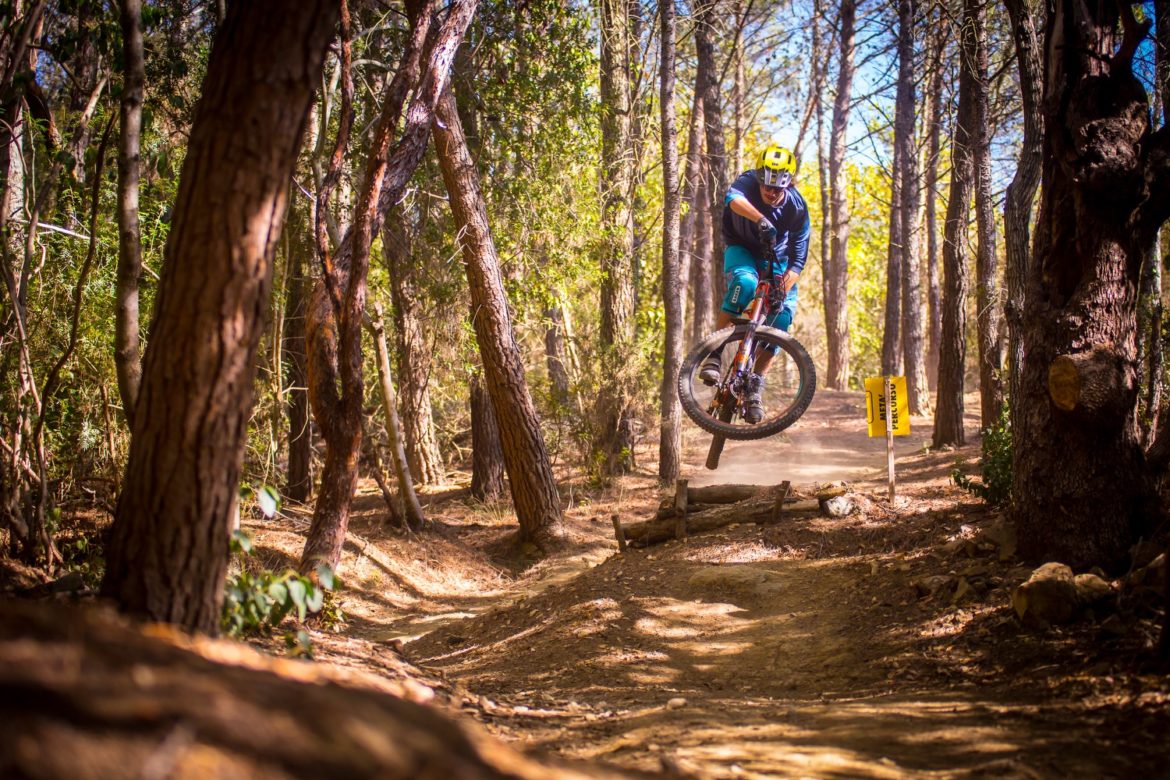 What makes the Massa Vecchia Hotel a good destination for dirt riders?

Well, Massa Vecchia has existed for almost 35 years. Ernesto Hutmacher founded it in 1985, with the aim of developing bike holidays here in Tuscany. Nowadays it is a proper Bike Hotel with all the services that a biker would need, from the workshop with a rental point with 80 different bikes (road, gravel, XC, trail, enduro, kids, eMTB) to a wash station, a private garage, guides, GPS devices, laundry, and a 2,500 square meter pumptrack.

What percentage of the trails are beginner, intermediate, and advanced level?

Our priority is definitely that a high percentage of people should be able to have fun on our trail area. I would say that 70% of the trails are for an intermediate level, 25% are good for beginners, and 5% request good riding skills. 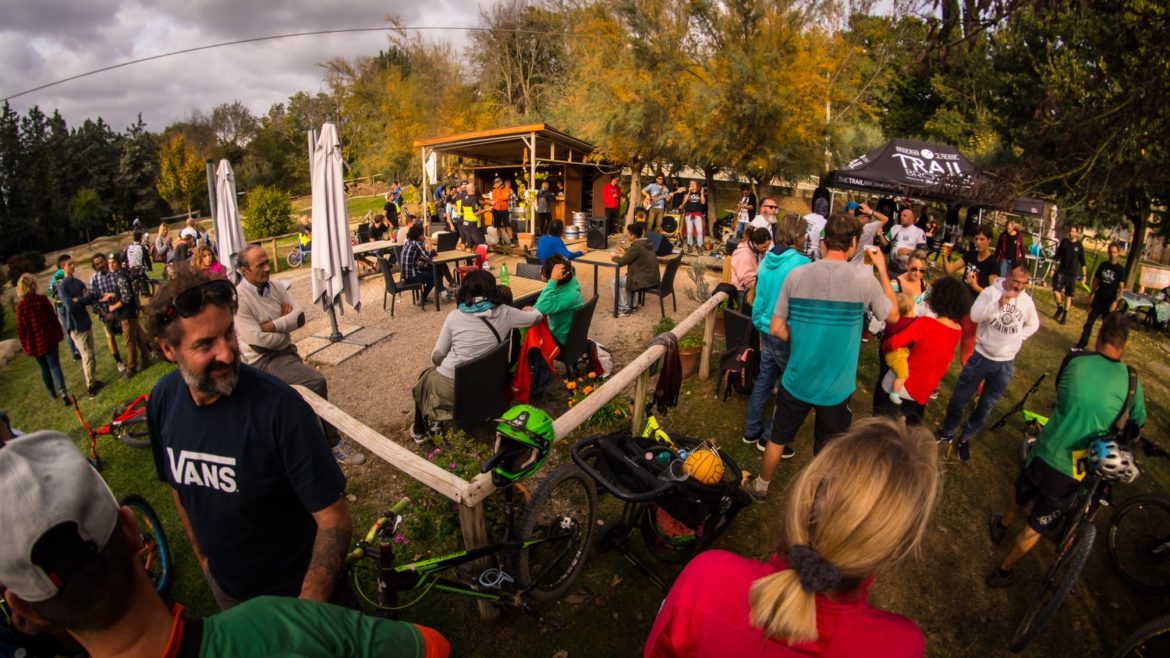 What are some of the future plans for the trail system? How and where do you hope to expand?

During the last few years, we have worked a lot on the uphill trails to have a better network and connect all the different trails and spots with each other. [This is] a matter of safety as well, to not risk having people riding trails in the wrong direction. Plus, with the explosion of e-bikes, you have infinite loops to shred and have fun both downhill and uphill.

The future plan is to expand the networks even more in this direction and create more possibility for kids, with easy flow lines. A skills park will open soon, just behind the Bike Hotel.

For enduro riding, we would like to soon have a signature double black line.

Have you all studied trail design and environmental impacts of particular trail placements and practices?

Nope. We learned in the field, meaning we learn from the work we have done.

A few of the guys [have been] trail builders for more than 15 years, building trails for many important races as well, but we never studied. We really learned from what we have done during the years, and while traveling and visiting other trail areas we always watched with curious eyes.

Every trail brother is a lover of nature, so when we are building, we always take care of the impact we are having in the woods. It’s all made with passion. If you personally ask me how I’m designing a line, or where I learned it? Well, I don’t know really, maybe all the MTB videos I’ve watched when I was younger gave me big ideas. I think it’s really about the feeling you get once you are in the woods and you see a big stone, a nice off camber or whatever gives you that sensation to say, “F..k! That’s perfect for a shred!”

Who are some professional riders or teams who have trained nearby and stayed in the hotel?

Well, the list here can go on quite long. Just think about all of the champions who have ridden for Scott in the last 20 years. From Nino to Brendog, passing from all the stars of the XC.

The Santa Cruz Syndicate was here as well in 2012, and we did a few events with Cedric Gracia as well. Many different national teams.

We have also hosted World Cup skiers and driving champions like Marcel Fassler. 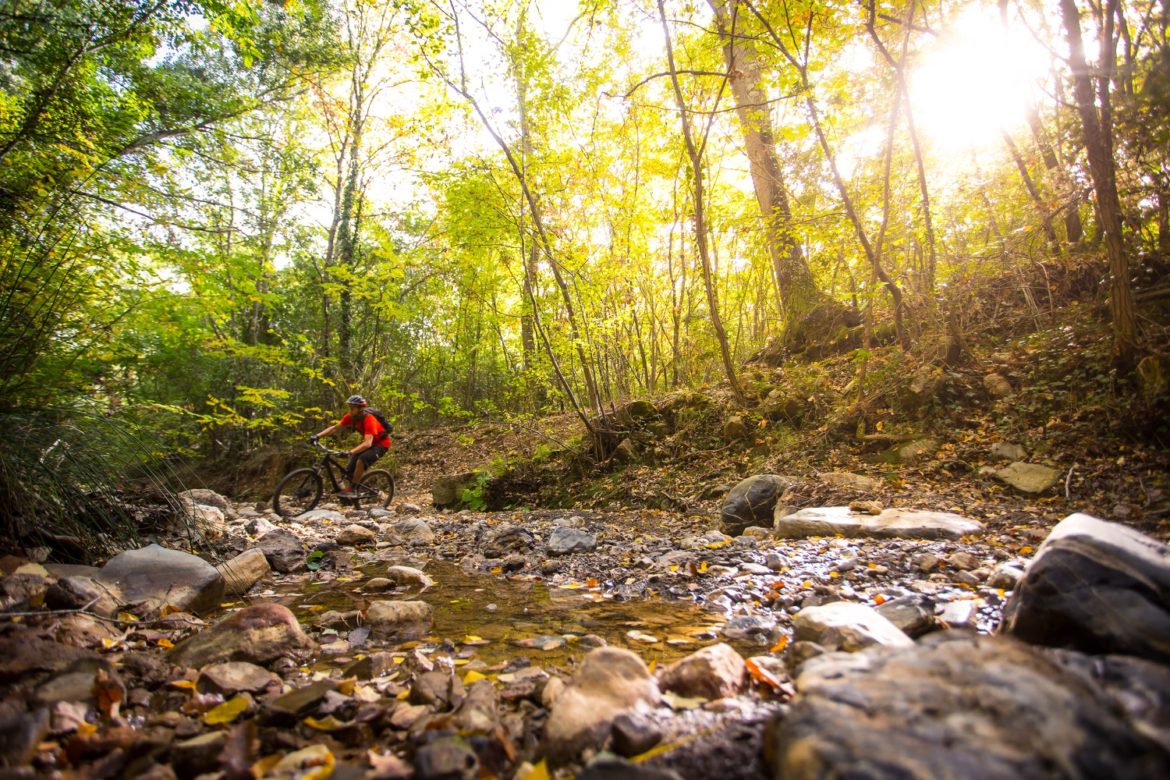 What are some other trail systems nearby that riders can explore?

We are located in a good position, as we are 10 minutes by car from the beach, with different trail areas all around us.

Punta Ala, [site of the] first ever EWS race, is a 20-minute drive away, and the Bandite trail area is nearby. Castiglione della Pescaia, Piombino, Argentario, are all within an hour drive and the Monte Amiata, with a proper downhill park it’s an hour drive too. If you add in an hour ferry ride, to a half hour drive, you are hopping on Elba Island as well. You need a month to check out all the riding in the region.

After hosting a Superenduro, do you think the trails you all have build will suit an EWS round in the future?

Well, the EWS is always looking to show the world the potential of different spots. We aren’t a super technical trail area, but that’s not [all that makes] a race, or anyways a high-level one.

The network we have and the characteristics of our zone would be interesting for the big crowd of people cheering the riders in the different stages that are close to each other, and ending up in our medieval square, [like] it was in 2016!

What is your personal favorite trail to ride in the system?

Hard to say! If I have to pick one, maybe I’ll go for the Rock n Roll Queen. It’s a black line in our trail park in Monte Arsenti and is a mix of everything, from stone on the top to a super good flow heading further down. 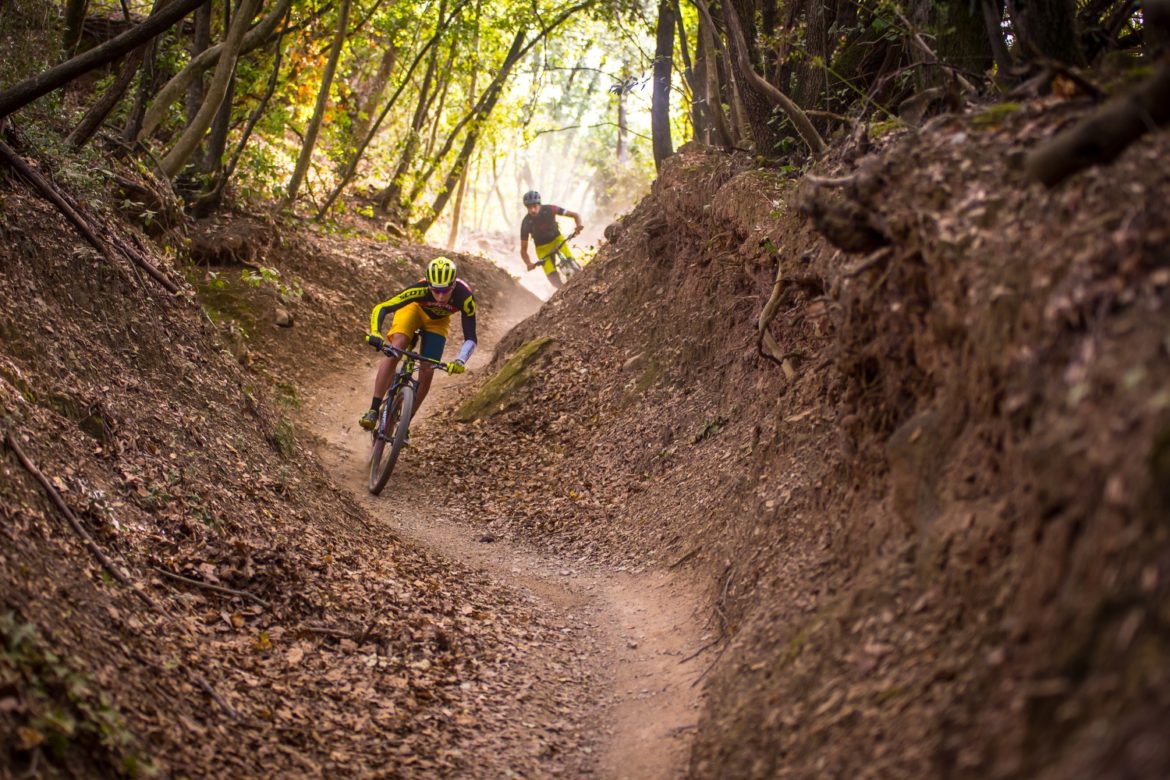