Most trails in the Pacific Northwest exist under the cover of dense forest. While the Cascade (west) side of Mount Hood is dominated by a lush, moss-covered, temperate rainforest of old-growth Douglas fir, bigleaf maples, and western hemlock, the Hood River Valley east of Mount Hood marks a transition zone, where the greenery trends toward a drier woodland of white oak, pine, and cottonwood. Wherever you’re at in Oregon, there are mucho trees!

The Syncline Trail, however, is in a world of its own. Located on the northern bank of the Columbia River just outside Bingen, WA, Syncline looks less like an Ewok-infested Jedi forest and more like a page torn from an Irish geology textbook. The trail actually sprawls down an anticline, identified by the high scarp known as Coyote Wall, while the syncline forms the channel through which the Columbia River passes. Misnomers and lack of trees aside, the Syncline Trail is one of the most unique and picturesque trails in the Columbia River Gorge.

Due to its width, mostly-impacted rock, and offerings of increasingly grander views of the gorge and Mount Hood as you ascend, the old jeep trail switchbacking the open, grass prairie is the most common method for climbing Syncline. Several options exist for building loops, starting with Little Maui diving off the jeep track to the east after about 500 feet of elevation gain. Next up is Little Moab–named so because of its likeness to the real Moab–located further up, which descends within feet of the Coyote Wall and is the most challenging trail on Syncline–chock-full of ledgy rocks, drops, and some tight, techy corners.

Further up from Maui and Moab, a westbound turnoff traverses the hillside, providing access higher up on Coyote Wall, where breakneck speeds through open meadows eventually tie you into Little Moab. Continuing past the turn off brings you further up the hill still before diving down to a creek bed and eastbound for the most diverse trail on Syncline: Hidden Canyon. The narrow singletrack sweeps above Hidden Canyon before plunging down through narrow, high-speed singletrack, more ledgy rock sections, and narrow tree gaps.

Some sections of trail cross over and nearby private property, and there’s even a home within a stone’s throw from the trail, so do take care by riding only on well-established trail. During late spring, wildflowers blanket the hillside, attracting many hikers, so you might consider Syncline as a midweek ride. The lack of tree cover exposes mid-summer riders to higher-than-normal heat for the gorge, so I usually pack more water for Syncline than other Mount Hood-area trails.

My main man, StumptownRider, says no Syncline ride is complete without popping in at Everybody’s Brewing, located just west of the trailhead in White Salmon, WA for a Sweet Potato Burrito paired with Country Boy IPA.

Although I am including it as a Hood River-area trail, Syncline is actually on the north side of the Columbia River just outside the town of Bingen, WA. From Hood River, cross the toll bridge and turn east on Highway 14. In just under 5 miles from the bridge, passing through Bingen, turn left onto Courtney Rd. and veer right to the trailhead parking lot. From the lot, ride east on the old roadway, passing Coyote Wall, where the jeep trail starts on your left. 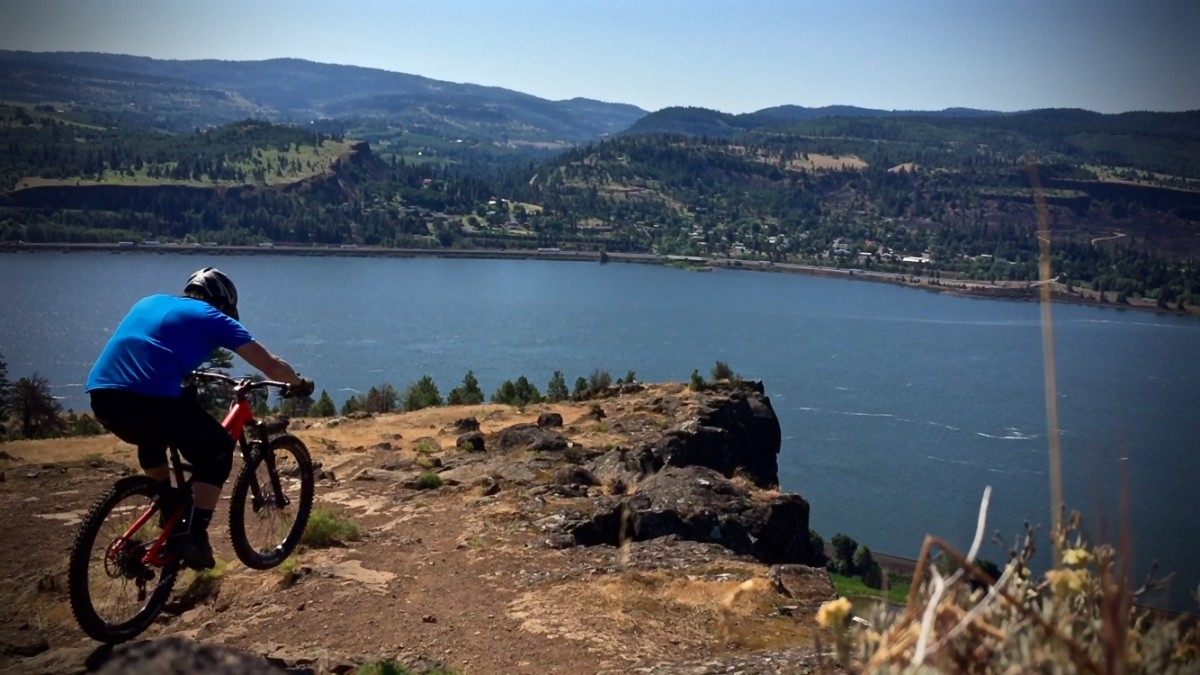 I understand this is a seasonal trail due to rattlesnake and poison ivy infestations once summer arrives. Correct?

Poison oak, yes. I’ve yet to see any rattlers out, but I’ve heard from locals this can be the case. Syncline is also a good non-summer ride because it dries quicker due to exposure. Certainly rideable in summer, but if it’s real hot, better to just go across river and hit some shade in Post Canyon 20 minutes away.