For years Canmore has been marketed as “15 minutes from Banff,” but for mountain bikers at least, Canmore shouldn’t be an after thought: it should be the primary attraction!

While Banff National Park and the trail development taking place there is truly special, due to Canmore’s proximity to Banff, you can easily combine Canmore and Banff into one epic mountain bike trip. However, as of the time of this writing, you can knock out all of the singletrack riding in Banff in one big day. But Canmore and Kananaskis Country? Think again! 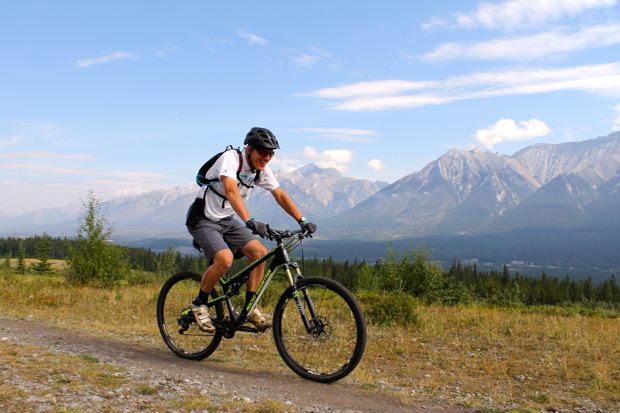 Before I delve deep into the trails of Canmore, a bit of history is in order. Canmore began life as a coal mining town in the late 1800s, with the coal mining industry continuing well into the 20th century. In fact, coal mining was a major industry in Canmore until Canmore Mines Ltd. closed their doors in 1979.

Canmore’s path changed abruptly when the Winter Olympics came to Calgary in 1988. Canmore was chosen as the site of the Olympic cross country skiing facility, and what is now known as the “Canmore Nordic Centre” was sited in the hills above town, on the remains of several now-defunct coal mining towns.

While the cross country ski competition during the Olympics was huge, the construction of this facility forever changed the destiny of Canmore. The town clung to this facility, and continued to upgrade it and expand it over the years. During the decades since the 1988 Olympics, this facility has been host to a plethora of cross country ski races, on both the Canadian and international stages with many World Cup races. 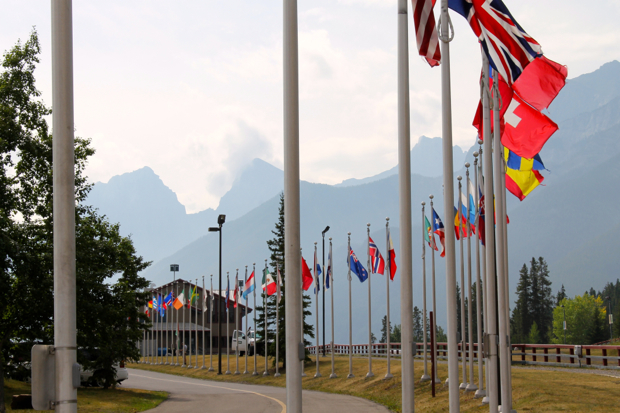 The Canmore Nordic Centre continues to be one of the most important cross country skiing locations in the world, with lighted tracks and snow farming that guarantees a mid-October open date and attracts professional cross country skiers from all over North America for early season training. 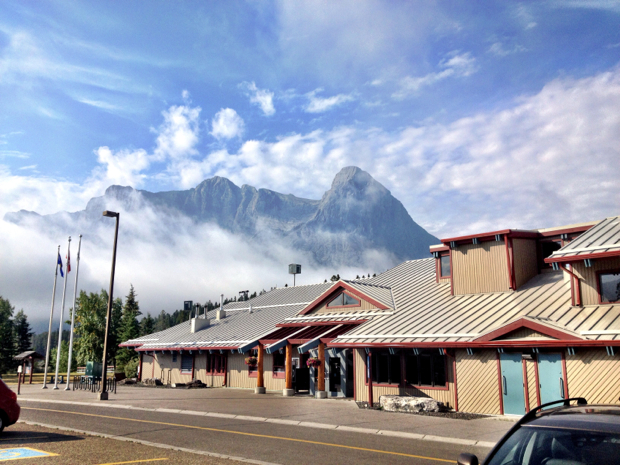 The transition to a summer mountain biking destination was a natural one for this cross country ski town. Many of the first singletrack mountain bike trails that were built in the northern United States and in Canada were intermingled with cross country ski trails, with the aerobic crossover between the two sports forming a very natural link. (For another example, read about the progression of mountain bike trails at Levis Mound in Wisconsin here.) 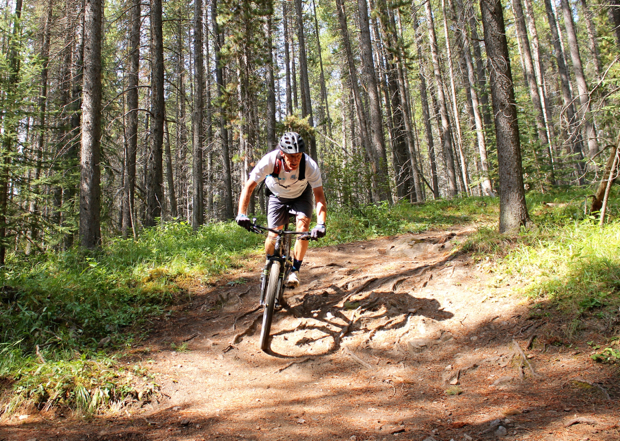 Early on, the Canmore Nordic Centre earned its mountain bike race pedigree by attracting world cup cross country mountain bike races in the 90s, and then major 24-hour races, including 24 Hours of Adrenalin and the 24 Hour Worlds. While the 24 Hour Worlds are now defunct, one of the few remaining major 24 hour races, 24 Hours of Adrenalin, is still held at the Canmore Nordic Centre and still sells out a field of over a thousand racers in a matter of minutes.

In addition to Adrenalin, the Nordic Centre will play host to a Canada Cup XC race next summer, as well as the 50km Rundle’s Revenge race. And the weekend I was in town, an Xterra event was happening at the centre.

Impact on the Culture of Canmore

This lengthy athletic legacy has culminated in a town and culture that is radically different from the town of Banff, just 15 minutes up the road. While Banff receives millions of tourists each year, many of whom are international, the vast majority of Canmore’s tourism is regional. Whereas many Banff visitors are interested in shopping and taking selfies with the mountains in the background, most of the residents and tourists visiting Canmore are hardened athletes that, in most normal circles, might be considered “extreme,” “obsessive,” or plain “crazy.”

That’s not to say that Canmore doesn’t have amenities, as they boast restaurants and shops a-plenty. But to sum it up in one simple phrase: Banff is for sightseers, Canmore is for athletes. 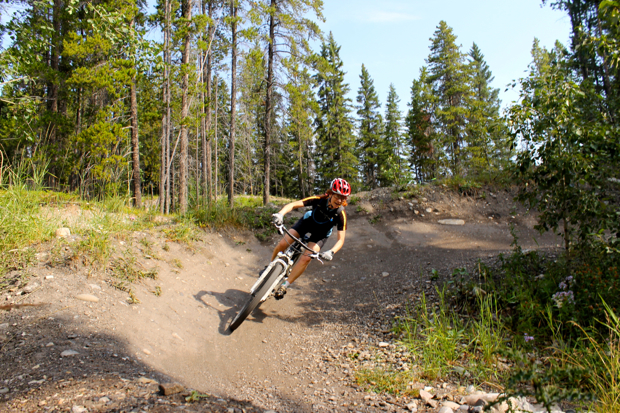 The Canmore Nordic Centre is a complex, interconnected web of singletrack and cross country ski trails. Thankfully, the signage is great and corresponds very well with an up-to-date map, available at the Trail Sports bike shop.

To hear some people talk about the Nordic Centre, you might think that all this area has to offer is buffed out machine-cut singletrack–but nothing could be further from the truth! While many of the trails at the Nordic Centre are indeed machine-built, the Centre is home to a vastly varied network of trails. Some of the machine-cut tracks are smooth and flowing, while others are chundery and offer challenging sections. Still other portions of trail are new school flow trails with berms, jumps, and rollers, and the skills park offers great jumps and stunts. And finally, if you look hard and aren’t afraid of a challenge, you can still find steep fall line sections of old-school singletrack leftover from the World Cup days of yore. 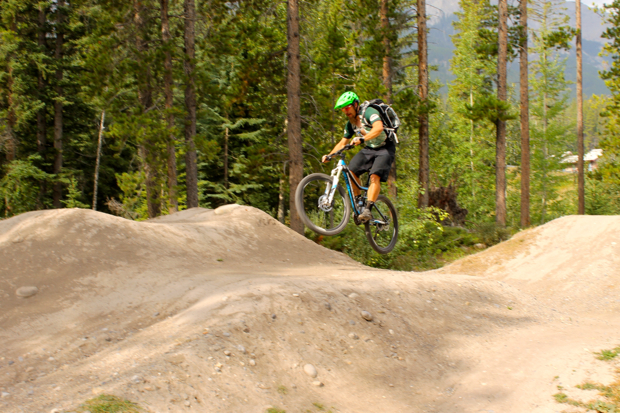 My local guide, Charlie, gave me a fantastic sampling of the trails at the centre, but we didn’t come close to hitting everything! Thanks to the network format and the wide variety of trail difficulty, we encountered all sorts of riders from hardened racers checking out the course for the upcoming Xterra to groups of kids who were a part of the local kids mountain bike program. Even on the Friday that we were riding, the main connectors to and from the trailhead were busy, and the Trail Sports rental fleet was almost completely gone. Still, as we ventured further into the network and onto the more challenging trails, we were blanketed in complete solitude in the deep Alberta forest.

Trails continue to be added to the network as well. While the majority of the new trail developments coincide with the closure and rehabilitation of old, unsustainable trails, there is new trail work in progress that will eventually revamp the singletrack connection to Banff, and then extend down into Kananaskis country and eventually connect to the Great Divide trail, thus rerouting the beginning of the Tour Divide route onto sweet, sweet singletrack! While this project is still just in the beginning phases, the kilometer of still-under-construction singletrack that I rode at the Nordic Centre is promising!

The topic of fat biking came up again and again during our trip to Alberta, and here at one of the premiere nordic centres in the world I thought for sure that fat biking would be greeted with antagonism. I couldn’t have been more wrong! While fat bikes don’t have complete access to the XC trail system, they are allowed on any trails that feature man-made snow–and judging from the massive snow making system, that includes most of the major loops. Also, while some of the bike shops in town had rented fat bikes the previous season, Trail Sports will be devoting valuable floor space to a small fatbike rental fleet this winter as well. As the premier shop for cross country ski rentals and sales in this region of Canada, splitting their focus and incorporating fat biking into the winter business speaks volumes!

But it really is so close to Banff…

If you do come to Canmore for a mountain bike vacation, you really do need to ride in Banff as well (be sure to check out Jeff’s articles on the area). However, if you don’t have a car or don’t want to drive a car, you can ride an almost all-dirt loop from the Nordic Centre, around Rundle Mountain, to the Tunnel Mountain Trails in Banff, and then back on the other side of Rundle to the Centre. While I’ve spent so many words distinguishing Banff and Canmore from each other, with both gravel and singletrack connections between the two towns, it’s easy to consider them the same destination. 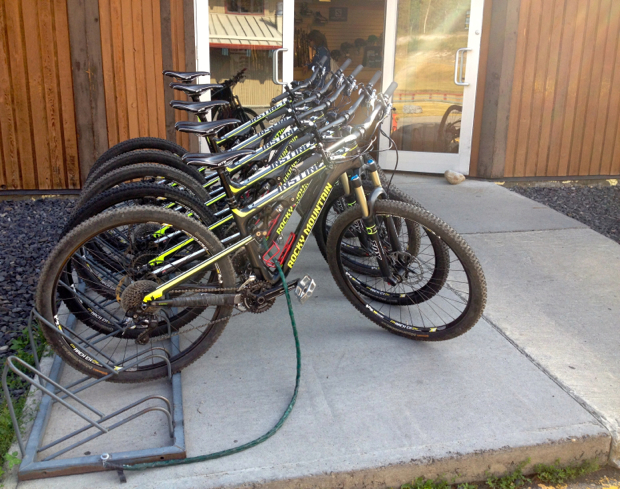 Traveling to Canmore and you don’t want to pack your bike? Trail Sports, located right at the Nordic Centre, has you covered! They have an excellent fleet of quality Rocky Mountain rigs, as well as a select few top-end carbon rentals. Now these $6,000 rental bikes don’t come cheap ($90 CAD for store hours or $125 for 24 hours), but the sheer fact that Trail Sports offers a full-carbon, XT-kitted Rocky Mountain Instinct for rental shows that they’re serious about mountain biking. And it’s paying off: they can hardly keep a bike on the floor!

If those prices are too steep for you, the Rocky Mountain Thunderbolt 730 is still a killer bike… and will only cost you $55 CAD for store hours or $88 for 24 hours.

While the Nordic Centre is truly the heart of Canmore, it’s only just the tip of the singletrack iceberg that is Canmore and Kananaskis Country. Tune in tomorrow for more information on the riding scene!

In addition to seemingly endless miles of singletrack, the town itself is waaaaayyyy cool! Banff may have the most stellar scenery in town itself, but that comes with the somewhat artificial vibe that is inherent in being strictly a tourist destination. Canmore seems to be populated year round with real people who are a part of the landscape itself, and they are the most chill people I’ve ever met.

One of my fondest memories from my Canmore visits was the old rock quarry which has become a local’s swimming hole, and it’s very close to the Nordic center. So the wife could sit and chill with a magnificent view of the continental divide while the kids jumped off ledges into the water and buried each other in the sand while I snuck off for a couple hours of singletrack fun on the Nordic Center trail system. Good times to be sure!

Outstanding article! You did a great job capturing the history of the area and the differences between Canmore and Banff. Next, you’ll need to come up to see the 24 Hours of Adrenalin in July (or put in a team). The event is mind blowing… probably the best anywhere. 2015 will be the 20th Anniversary event, so it will be a great one.

Thanks man, glad you enjoyed it!! Wow, 20th anniversary… that will be one HUGE party!