Traditionally, Crested Butte has been strictly known for massive cross-country rides at lung-taxing altitudes on singletrack that sports truly epic views. However, that may be slowly changing. 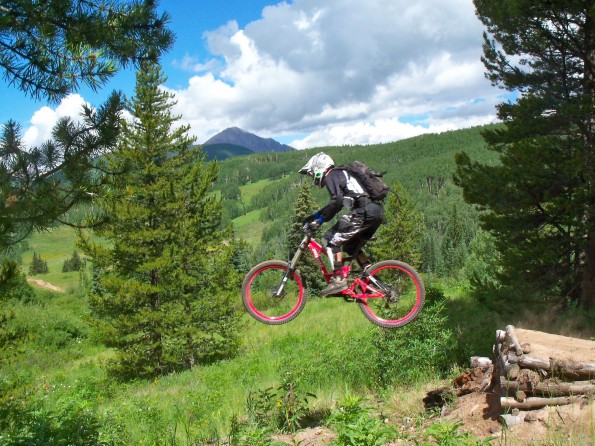 Christian Robertson on the Timeline trail.

Crested Butte Mountain Resort (CBMR) has been running their lifts for mountain bikers for 8 or 9 years now, but up until just 3 years ago, the runs consisted of old hiking trails and cattle paths – they were anything but mountain bike-friendly. In 2008 CBMR made the decision to hire on a crew of full-time workers to build and maintain a park designed specifically for downhill mountain biking, and Evolution Bike Park was born.

Since that time, the bike park has grown at an astounding rate! It now boasts 25 miles of trails that are open to mountain bikes, and five of those trails have been purpose-built for downhill mountain biking and are closed to uphill riders and all other trail users. In 2009, CBMR logged 3,500 rider days; in 2010, that number jumped to 8,000. According to Christian Robertson, the bike park manager, they hope to log at least 10,000 rider days this year.

I was fortunate enough to be shown around the mountain by none other than Christian himself, and he was kind enough to let me pick his brain on the chairlift rides up the mountain. CBMR also hooked me up with a free pass, one of their Specialized Demo 8 rental bikes, and some body armor so I could get a true bike-park experience. 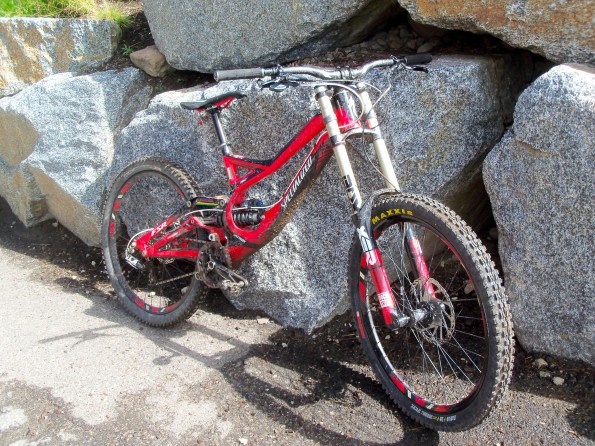 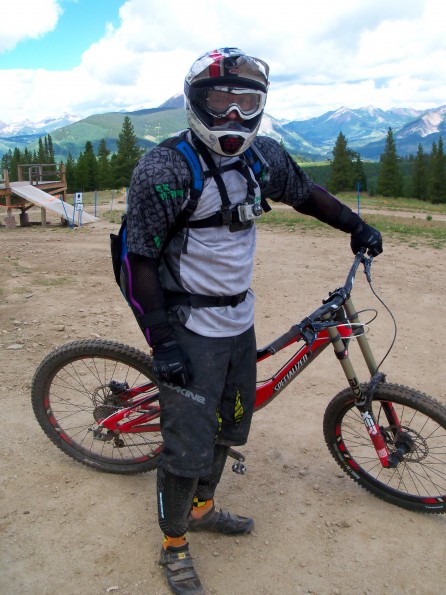 All kitted up, and ready to rip! 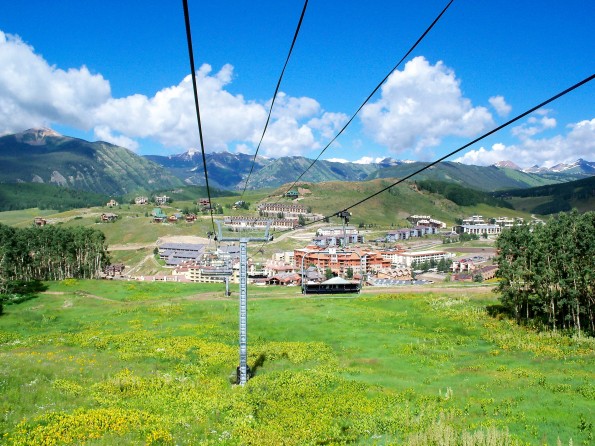 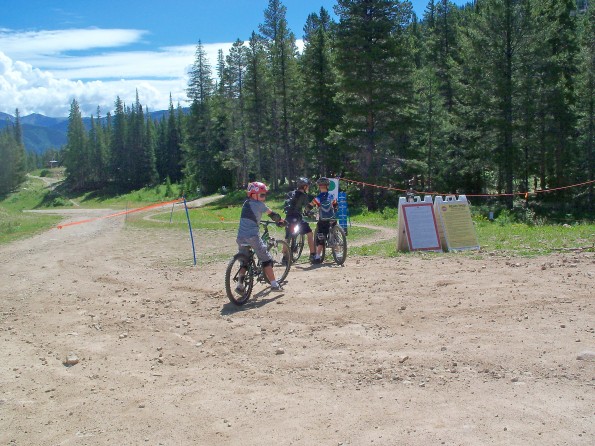 I was impressed by the number of groms tearing around the resort. Turns out there’s an organization in town called Gravity Groms. 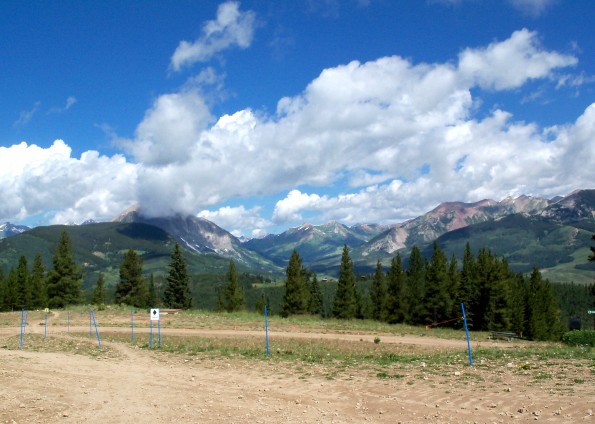 Like everywhere else in Crested Butte, the views from the top of the lift are surreal!

Without further ado, here’s a breakdown of several of the trails that we rode: 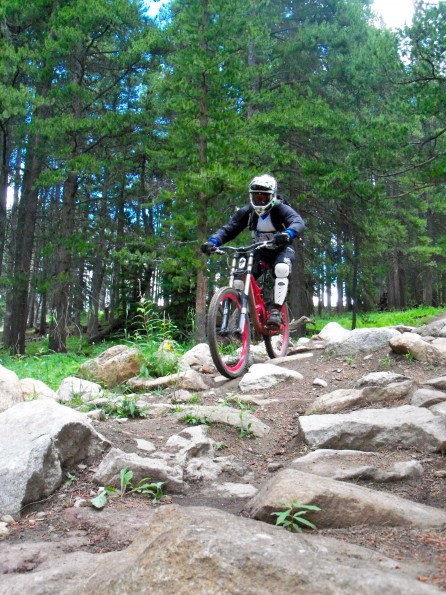 Christian pinning it through one of the rock gardens.

Avery is Evolution Bike Park’s race course, and as such there is a little bit of everything incorporated into this top-to-bottom black diamond trail. You’ll find plenty of drops (including a 12-foot cliff), technical rock gardens, bridges, table-top jumps, big berms, off-camber turns, slick mud, a step down, and tons of roots. Basically anything you can imagine, Avery will throw at you!

After just one run down this trail, I knew it was my favorite run on the entire mountain. I absolutely love the variety and technical nature. And while it is challenging, I didn’t feel like I was going to die every time I rounded a turn.

Check out some of my GoPro footage from Avery:

According to Christian, Timeline is the most popular trail on the mountain. Its design embodies what many people have come to expect in a fast, flowy jump trail. If you want to catch air and find your flow, Timeline is the place to do it! Almost every corner is bermed, rocks are few and far between, and the jumps vary from small kickers to table tops to massive cheese-wedge booters. 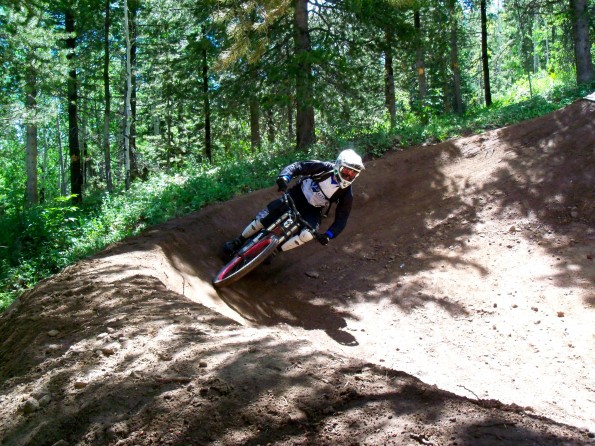 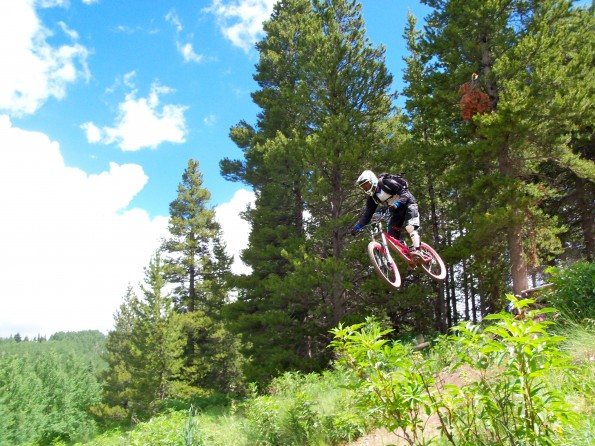 Wood’s Trail is far out on the rider’s right-hand side of the resort and it takes a little pedal to get there and back – but it’s well worth the effort! The top of the trail starts off with a quick barrage of small jumps and berms, but lower down the trail straightens out and speeds up as it feeds into a massive pair of back-to-back wooden wall rides. The lower section of Wood’s is currently under construction, but it looks like it holds a fast line of medium-size jumps.

Luge is the classic intermediate trail at CBMR, and it flows quickly down the mountain. True to its rating, it isn’t very difficult: this is a great warm-up run for advanced riders. Check out the video to get an idea of what it’s like:

The only double-black trail at CBMR, Psycho Rocks is full of (you guessed it) rocks and drops. If you are looking for gnar, a real test of your suspension, or are possibly suicidal, drop into this technical whirlwind! 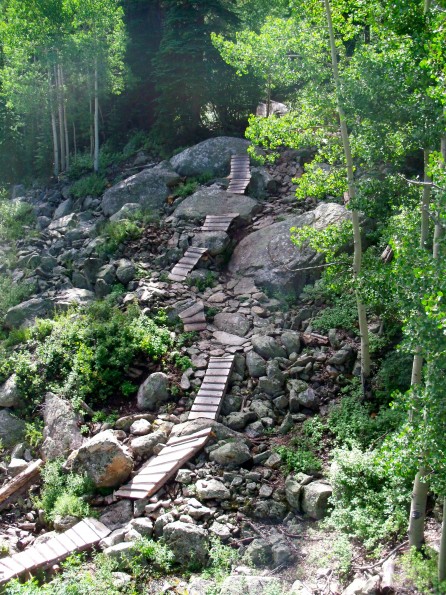 Check out this video (not mine) to get an idea of what kind of challenges this trail holds:

While the Evolution Bike Park is quickly turning Crested Butte into a downhill mountain biker’s paradise, the lifts can also be of use to those who are of a more cross-country persuasion. There are many trails at CBMR that are not downhill-specific, meaning they require more pedaling and are much smoother. Cross country riders can ride the lift up, and then hop on one of these less-challenging trails for a fun ride without nearly as much climbing! Since CBMR is adjacent to many of the other area trails lying outside of the resort boundary, you can truly build an epic XC ride with a fraction of the normal effort. While this might sound lazy to some, this can be a great benefit to riders coming from much lower elevation, and to those who just aren’t used to climbing very much. Epic trails like 401 still require a serious aerobic effort, though!

While they already have 25 miles of trails, Christian and the crew are not done building: Wood’s Trail is currently under construction, and they are hoping to break ground soon on another intermediate trail with mid-sized jumps to help riders progress their levitation abilities.

After I sprayed my bike off and returned it to the shop, I wondered to myself, “What is the most fun I’ve ever had on a mountain bike in a single day?” I’m not sure, but this day of shredding might have been it!

If you’re worried about the price of admission, well, you shouldn’t be. I was amazed at how affordable the riding is! A full-day lift ticket is only $35, and if you’re a beginner, you can get a package deal with a bike rental, lift ticket, and lesson for only $70! How sweet is that? 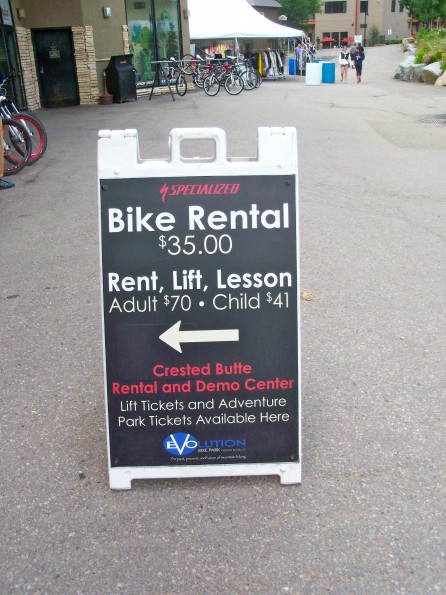 Many thanks to Christian Robertson, Erica Reiter, and Crested Butte Mountain Resort for the royal treatment!

Those are some great pics! I was watching the Psycho Rocks video thinking, “I could probably ride that” – until I saw the guy crash. Ouch. How did you do on your run?

I actually didn’t ride it. It had just rained hard the night before, so everything was looking pretty slick most of the morning with some standing water… add in the rumors of 12+ foot drops, and I just decided to pass! 🙂 And as usual, the photos and video don’t do it justice!

Overall, I felt pretty confident on most of the terrain, but on the some of the features I passed on, I think if I actually was able to ride DH on a regular basis, I could work my way up to them.

Oh Sweet mountain Goddess, how sweet you are looking….LOL! Mmmm, 12′ drops, rock gardens, & fast open DH runs is all that my heart would love. Makes me real jealous here in flatland FL….LOL!

Looks like you got quite the hookup!!! Pretty sweet that park manager showed you around. The Psycho Rocks pic is awesome. I looked up some more POV footage on youtube and man, that looks crazy.

@maineskiaddict, yes indeed! It was a great experience.

@ mtbgreg1….Get used to it, its just part of the game bro! You know you ain’t pushing the limits when you ain’t breaking something….LOL!