After a successful two days in Price, it was time to turn the van toward home and bring the 2nd Annual Spring Break Singletrack Trek to a close–but not without one final stop. A few years back, Moab embarked on a quest to add both quantity and variety to its mountain bike offerings, a trend which continues to this day. One of the early products of that new trail explosion in the world’s leading mountain biking mecca was the Sovereign Trail.

I had planned on riding this route on two previous trips to Moab, but was thwarted both times: once by the need to return home early, and once by a relentless rainstorm. We would not be thwarted this time! Since Sovereign lies well north of town, it’s a much shorter jaunt south from our I-70 route than most of Moab’s other offerings, and was really quite a convenient little detour.

At first blush, the Sovereign Trail looks like a simple endeavor: head out as far as you want to go, turn around, and return. But it’s actually much more complex. First of all, there’s the Sovereign Singletrack and the Sovereign ATV Trail. Also, Sovereign intersects and parts from the Salt Wash trail at multiple points. It also turns out the full Sovereign Trail funs far beyond where most people turn around, providing the opportunity to log over 30 challenging miles. For our outing, we opted for a simple out-and-back of about half that distance, with some free form slickrock exploration at our northern terminus.

Almost immediately upon its opening, Sovereign became an instant Moab classic, and it’s easy to see why. This is another great ride for those who crave a little variety and appreciate a high fun-to-work ratio. Our journey logged a little over 1,200 vertical feet of climbing, but it came mostly in small chunks, and more of it was on the way out, making for a quick and fun return trip. The trail serves up as many ledges, hucks, rollers, and stunts as you can possibly digest, and never goes long between interesting sections.

We rode the trail on a perfect weather weekend and, although we did encounter a few dozen other mountain bikers, as well as a dozen or so motorcyclists on the motorized-legal portions, the trail never felt crowded and our flow was never disrupted. Adding to the fun was the fact that everyone was exceptionally cheerful and really seemed to enjoy sharing their pleasure.

At the north end of our route, the trail skirts the edge of a huge slickrock field. We didn’t see any other riders making the detour, nor did we see any evidence than any had. We also did not see any signage forbidding it, so off into the field we went. This was total free-form, make-it-up-as-you-go riding: there was no trail, no dashes or dots painted on the rock… indeed, there was absolutely nothing to suggest any particular route. We just headed into the field and played. The field is comprised mostly of large rollers with some sharp, unrideable crevices between them, so there would be an occasional dead end and backtracking to find another route which might take us to the top of the field. We never worried about getting lost since the tilted field always gave us a view back to the trail from whence we came. Upon reaching a high point, we chilled with a cliff bar and then made the quick return back to the van.

Somewhere on the way back, we inadvertently wandered on to the Salt Wash Trail. While unplanned, this was not unwelcome, turning part of our route into a sort of reverse lollipop rather than a simple out-and-back. Salt Wash is a little less entertaining than Sovereign, but worth incorporating into a return trip. I don’t recommend riding it on the out leg unless you like pushing your bike as much as riding it: there’s no shortage of deep sand on difficult grades. Altogether, Sovereign earned top marks in my trail list, and I’d love to go back now that I know the way. It was a perfect end to a perfect week.

Like last year, I collected stats from our Ultimate Spring Break Singletrack Trek: 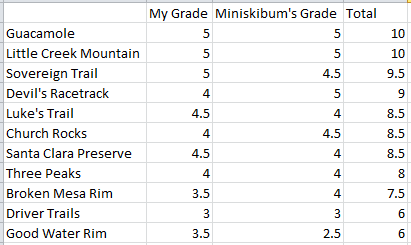 Like last year, some rides were worthy of special recognition. Here they are:

The Best Scenery in the Middle of Nowhere Award: Good Water Rim

The Ride Everyone Should Go Out of Their Way to Hit: Luke’s Trail

My “I Wanna’ Ride That Again!” Award: Guacamole Trail

So, it turns out the sequel was in no way a letdown from the original! While the trip was one day shorter and we rode a total of 4 fewer trails and 30 less miles, the quality of what was under our knobbies was actually better overall–a feat I would not have though achievable. Our combined rating (a sample size of two, admittedly not a statistically significant sample) jumped from 7.4 to 8.4 out of 10. And while lots of tension and drama may be an ingredient for a great movie, it’s not exactly what we look for in a bike vacation, so the fewer injuries and major mechanicals proved to enhance the trip as well. It was also great to add another character, Mntbikedude, to the show for a few rides, and our interactions with local bike shops in Price and Hurricane were unparalleled, making for a perfect nine days.

As much fun as it might be, it seems highly unlikely we’ll be able to pull off a trilogy. We shall see next March…

Culture
The Starting 5: Getting Back to Mountain Biking, Together
Trails
5 Things Every Mountain Biker Has to Do in Park...
Trails
Off the Beaten Path in Steamboat: Seedhouse Loop, North Routt...
Trails
Spring Break Singletrack Trek, The Sequel, Part 5: Price is...