During my visit to Steamboat Springs Ski and Bike Kare in a futile attempt to get the Superfly repaired after that fateful ride on Emerald Mountain, I got to chatting with a few of the local guys. One dude named Bryan volunteered to take me on a ride on some of the lesser-known trails located to the north of Steamboat in North Routt National Forest. 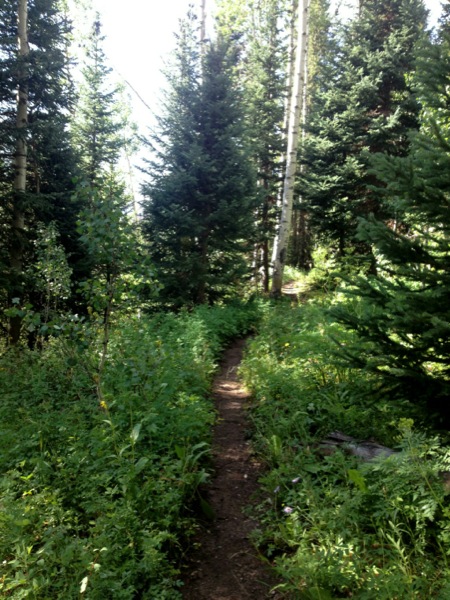 As we spun up the first climb, we started chatting, and an interesting fact came out that wasn’t mentioned when we were chatting at the shop: Bryan had just finished racing the Tour Divide a few weeks previous. Yes, the Tour-Frigging-Divide. I knew then that I was in for an ass-whooping.

It was easy to see that Bryan wasn’t a young gun, so I just had to ask his age. At the time, Bryan was 57 years old, and it had been over 20 years since he had last raced a bike! Bryan finished the 2,800-mile Tour Divide route from Banff, Alberta to Mexico in 22 days, averaging 128 miles and 14 hours of riding per day. Hot dang!

I’m still a pretty young wet-behind-the ears whelp, so I meet people all the time that just write off the number of miles I log on the bike as a product of my youth. If I had a dollar for every time I heard the excuse “oh, I’m too old to do that,” I’d buy myself an Ibis Ripley. Even from riders who have been pedaling for longer than I’ve been alive, I often hear, “oh, I’m too old to go that fast, go that far, or go that big.” After riding with Bryan, I call BS on all of those excuses. You’re only as old as you make yourself… age is just a number.

Anyhow, I digress a bit, but it was an inspiring ride, to say the least! 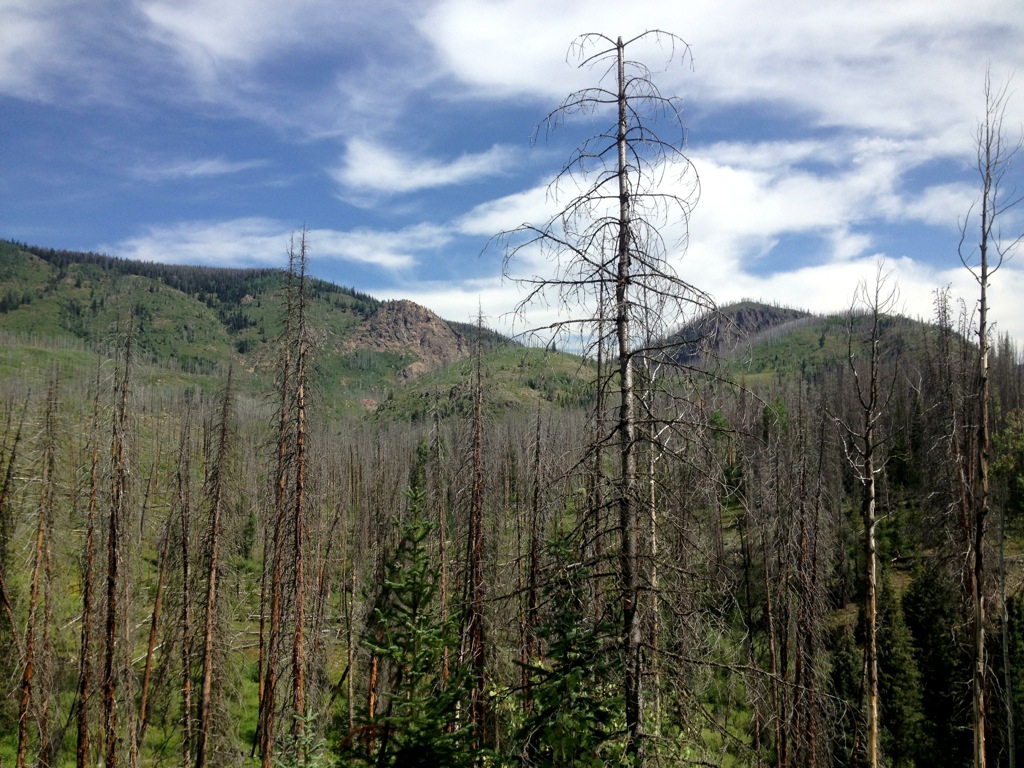 We began by climbing up the Coulton Creek trail for a few miles, which led through a stand of lush aspens to this old burn zone. 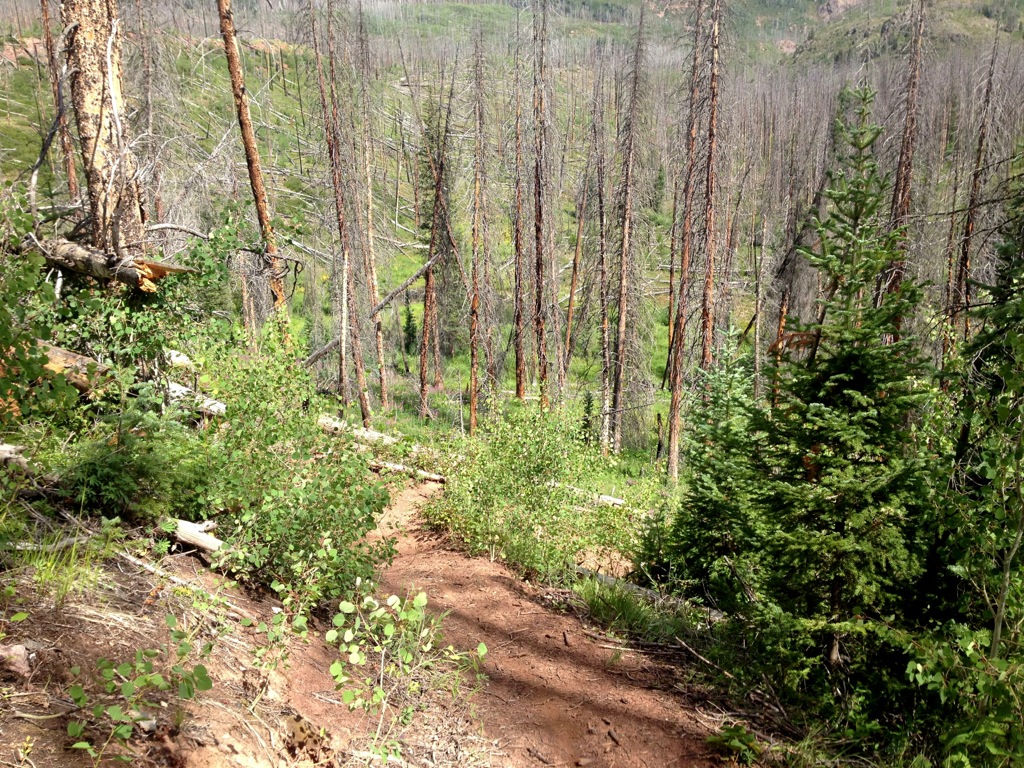 As we climbed higher through the burn on the Scotts Run Trail, we encountered some rockier, dryer terrain. Bryan was a good-natured guide, and more than happy to wait for me at junctions and the tops of the climbs. 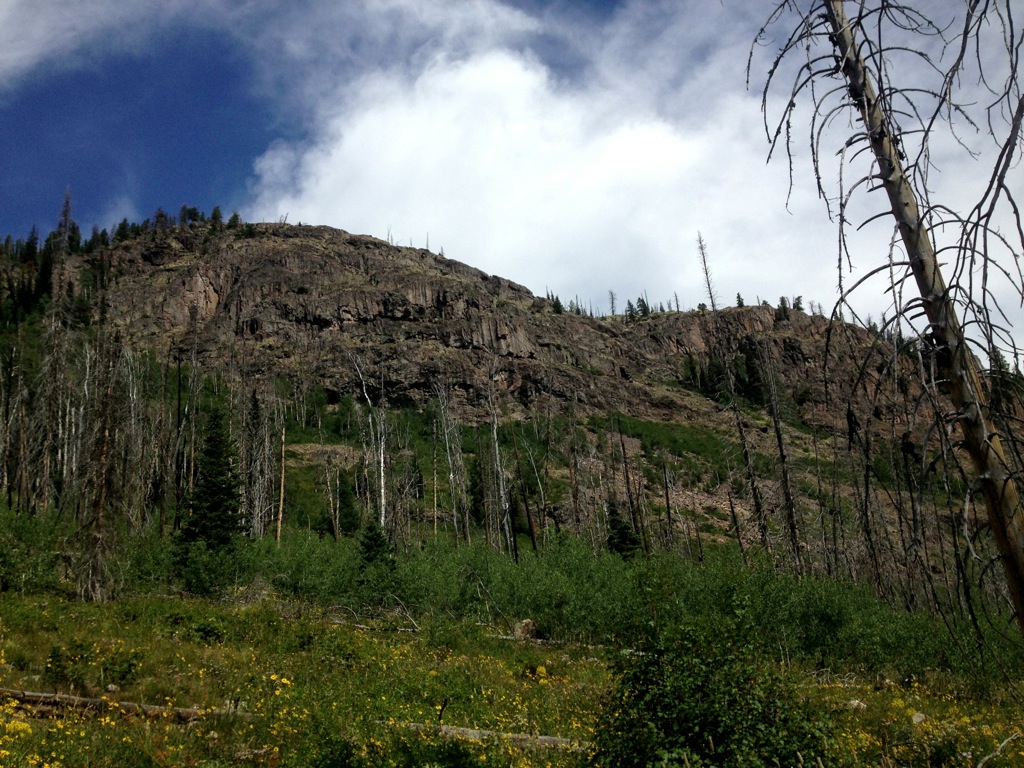 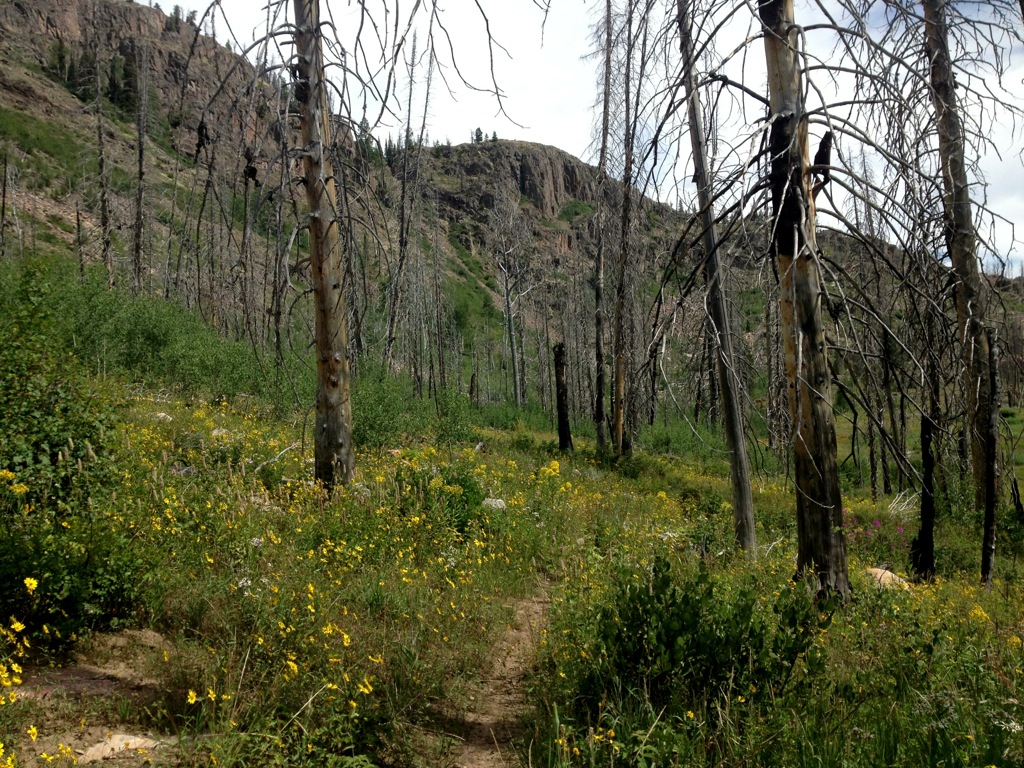 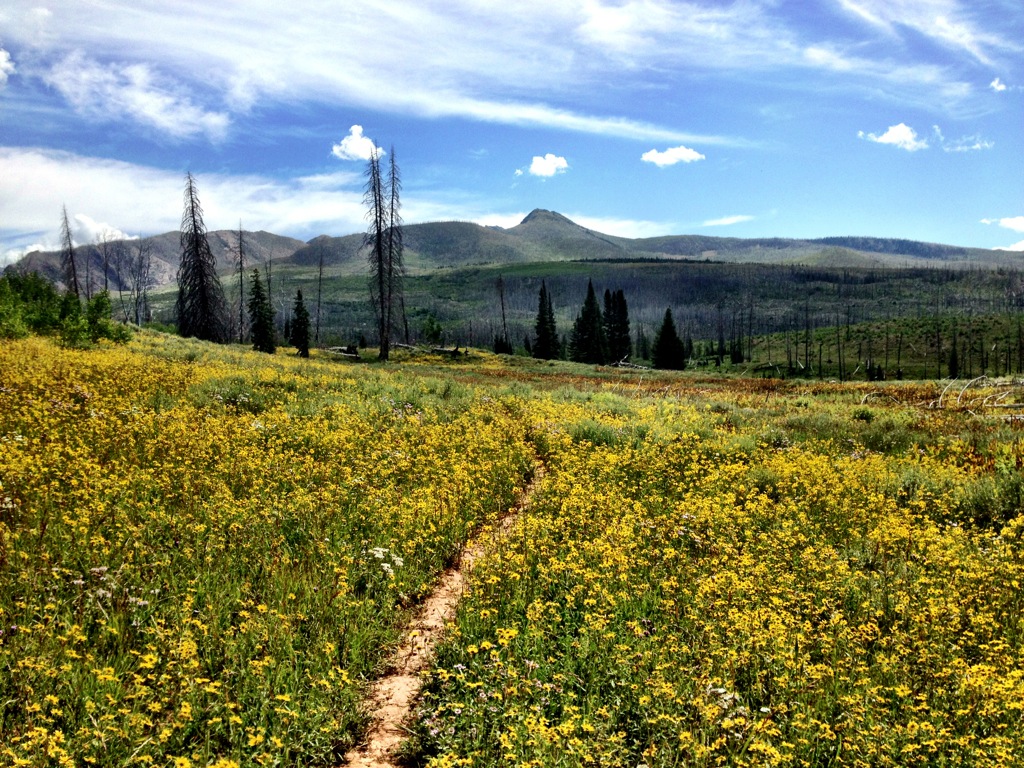 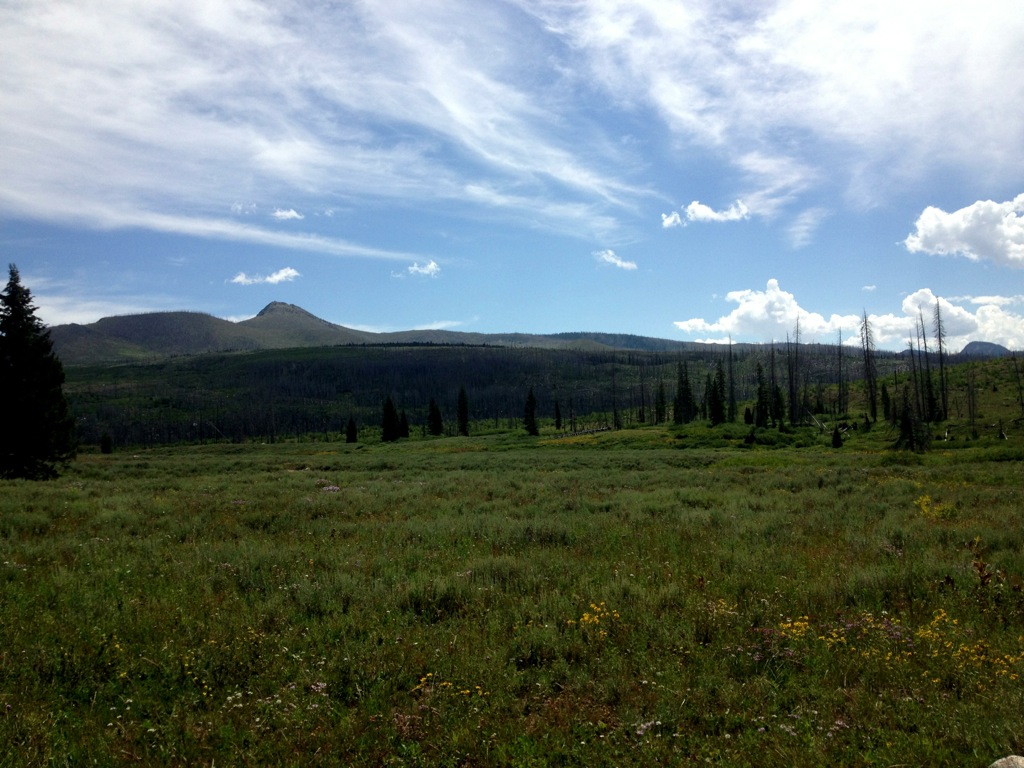 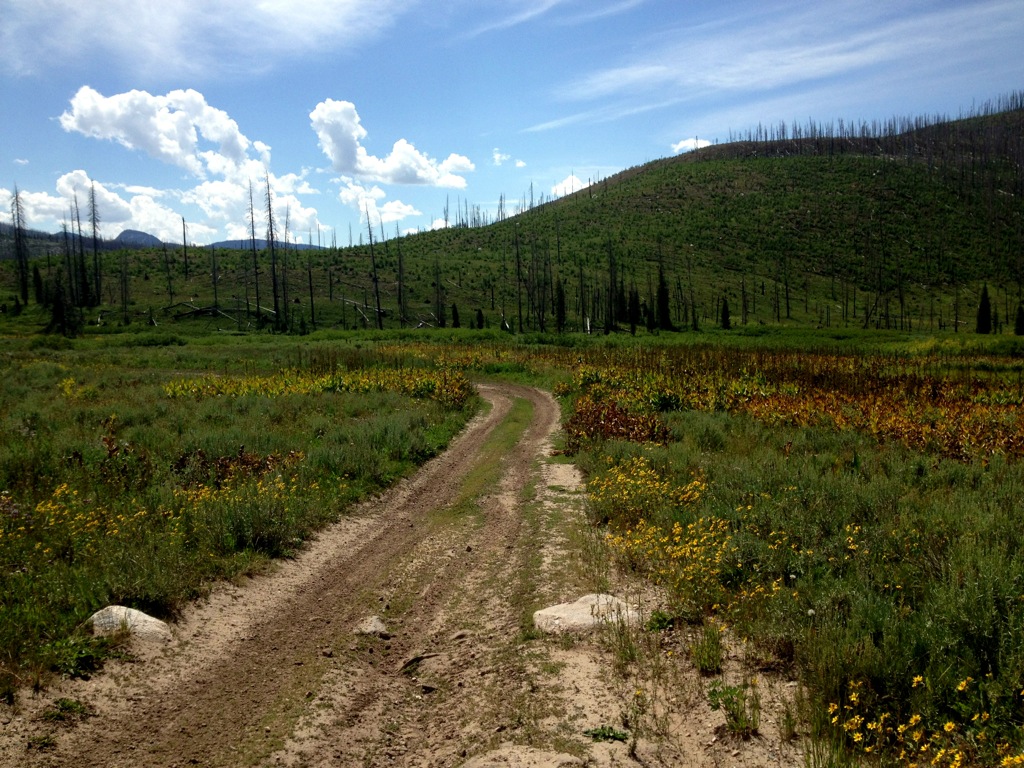 Eventually, we took a right on the Diamond Park trail and flew down the rolling, gradual descent, back down to road 400/64, which we used to complete our loop. 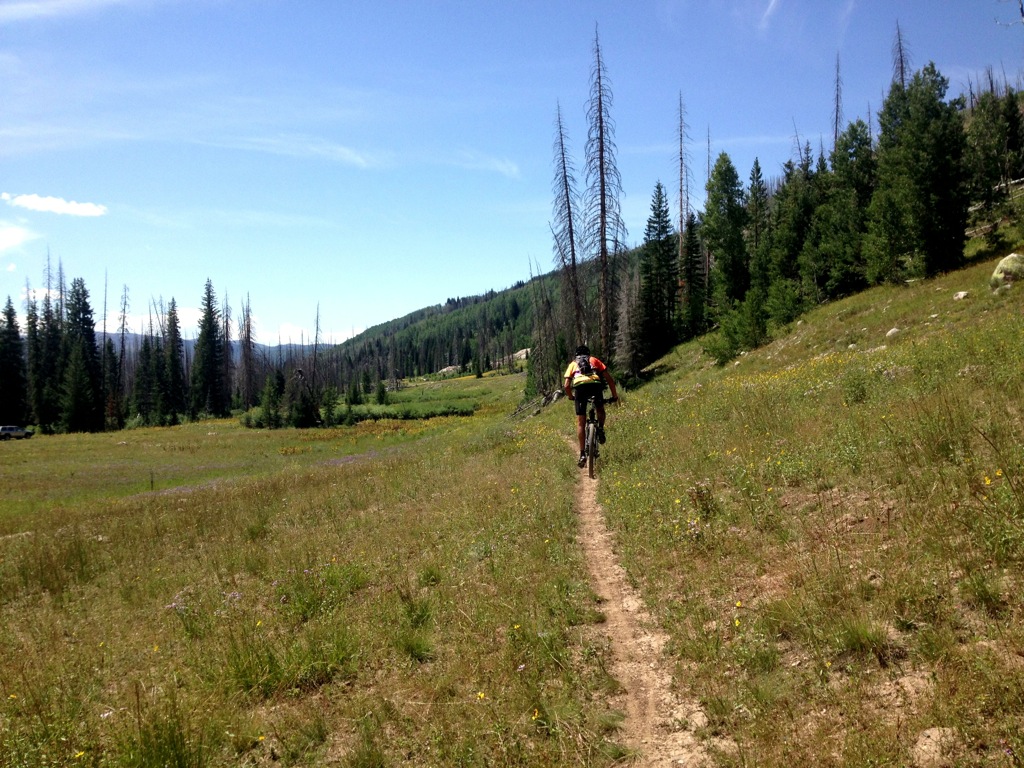 We ended up logging over 20 miles of riding and 2,000 feet of elevation gain in this quick loop:

The Seedhouse trails felt so radically different than the trails closer to Steamboat. While we encountered a couple of people, Bryan assured me that this was a busy day for North Routt! And looking at the singletrack, I believe him: while the trails we rode were easy to follow and reasonably well-signed, the singletrack was extremely narrow, and looked like it was only really ridden by a handful of locals.

As one of the more easily-accessible rides in North Routt, this was still a solid half-hour drive, maybe a bit more, away from Steamboat Springs proper. While that’s not much in the grand scheme of things, for the average tourist visiting from out of town, that might as well be a thousand miles.

After examining the map some more after our ride and noting the small amount of terrain we covered on our 20-mile loop, I realized that this ride was only the smallest sampling of what North Routt has to offer. Even with a map, it’s difficult to tell how many hundreds of miles of trails there are to explore in this region! Many of the other trails are shared use with motorcycles, and are much more remote, convoluted, and not as well marked as the loop we rode. So if you venture north from Steamboat into the Routt National Forest, bring your map, pack your compass and a few survival supplies, and prepare to explore!