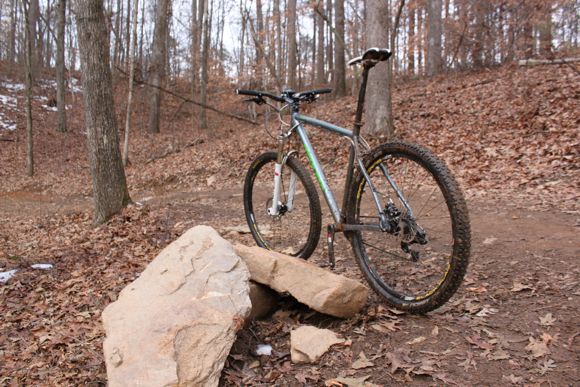 It’s day 10 of my 29 Trail challenge and I managed to ride just one more trail today. While the ice and snow have melted a good bit here in Georgia, a lot of it is sticking around, keeping the trails wet and slushy. I called the Gwinett County trail hotline this weekend in hopes of riding on the east side but all the trails were closed and remain closed today.

Since not all mountain bike trails have status hotlines and I didn’t want to drive too far only to find closed trails, I ventured out to Sope Creek figuring I could at least ride the gravel loop by the river if the trails were shuttered. Turns out parking is free at all National Parks and Recreation Areas today in honor of the MLK holiday so my timing was right! 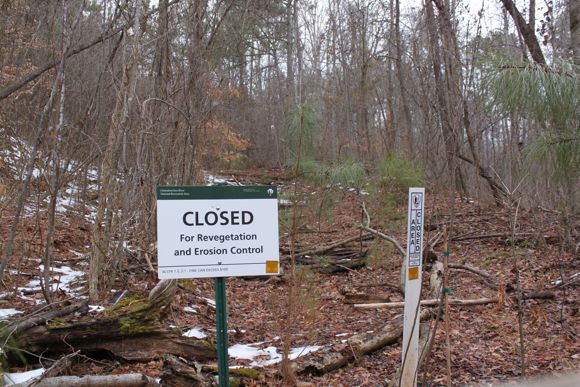 In 2009 I helped out during a couple trail work days at Sope Creek and I was eager to see how the new trails were holding up so far. I was also curious to see how the re-vegetation was progressing on the old trails I helped close that spring. The lead into the trail from the river side was in good shape but things started getting a little tacky as soon as I got onto the new trail. To be honest some parts were more than tacky – they were downright muddy and clearly others had ridden the trails this weekend. 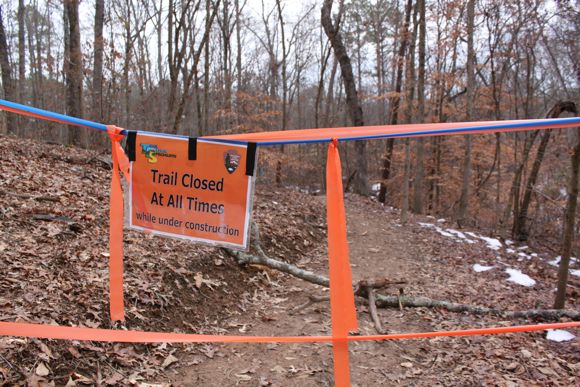 Near the top of the first climb I saw one of the new trails being cut and by the looks of it I’d say it might be open to mountain bikes (though I don’t know for sure). The upper forest road portion of the trail was in good shape and the new switchback descent on the other side was covered in a nice crust of snow that was still firm and crunchy – not muddy at all. 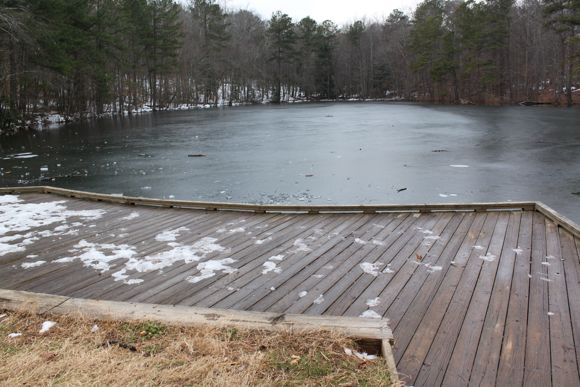 I rode to the upper Paper Mill Rd. parking lot and headed back, stopping at the lake where I used to ride my bike off the dock and into the water as a beginning mountain biker. That probably wasn’t great for the bikes but it felt awesome in the summer after a long ride! 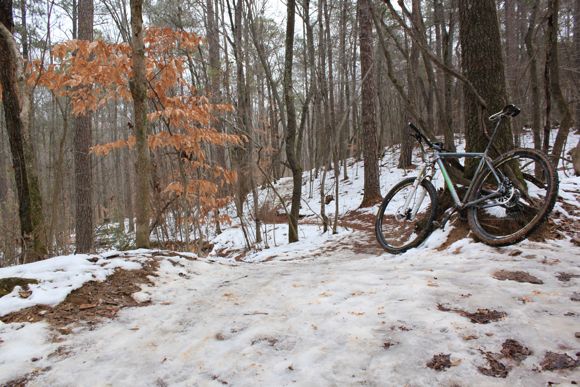 All told I was able to get in about 8 or 9 miles of riding this morning and it felt great to finally get back on the bike. With temperatures in the upper 40s it was a nice hour in the saddle despite the muddy spots. Fingers crossed for blue skies and dry trails over the next 3 weeks…

The word is, the new stuff won’t be open to bikes for another year or so as it has to go through mounds of red tape. Gotta love National Park Services. Hopefully someone up there will keep it at the fore front and make it happen sooner rather than later.

Hey, I saw you on 285 around 11:30-ish & must have been after your ride due to the mud!
I thought the bike looked familiar from other posts, but wasn’t sure.
I got out yesterday & like you it felt great just to be out again!!

Given the weather you’re having, maybe you should have tried for “Single Trail on a Single Speed” 😀

I just got on the bike for the first time in a couple of weeks, but I stuck to the pavement. I was going to try some gravel roads, but I drove up to check them out and it was an absolute mud/slush fest. No good! I want some dry singletrack 😀

I feel your pain…my last ride a couple of weeks ago was in the slop, been on the trainer or hiking trails. I’m ready for warmer temps & dry trails but thats still a few months out:(