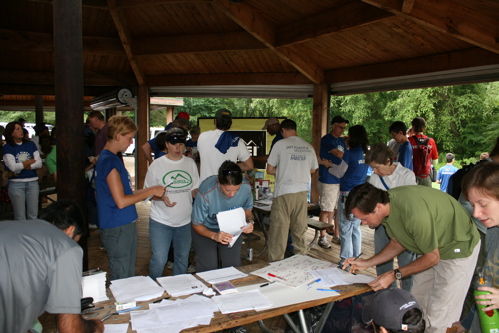 Saturday was National Trails Day and I got a chance to help out with the MTB trail reroutes out at Sope Creek just outside Atlanta. I assumed this would be just another monthly SORBA work day with maybe a dozen volunteers so I was blown away to see nearly 200 people ready to work at 8am! Apparently REI promoted National Trails Day involvement pretty hard and was able to get a good group out there, most of whom were not mountain bikers. The SORBA guys were clearly in charge though and ended up leading several groups of ~20 volunteers each.

My group (led by SORBA Atlanta prez. Tom Tomaka) was assigned trail closure duty – sorta like demolition work on a construction site. While we piled sticks, leaves, and logs on top of the old, eroded trail other groups were busy constructing split-rail fences at the entrances to the old trail to route riders and hikers to the new dirt. Still other groups did finish work on the new trail sections, clipping roots and tamping loose dirt to make the trails smooth as butter. 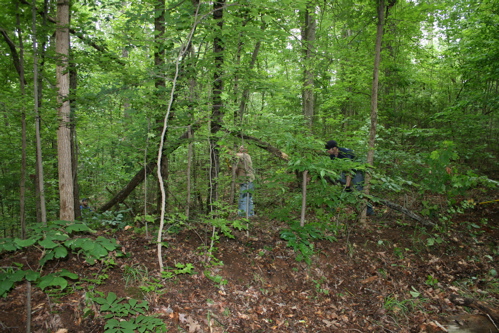 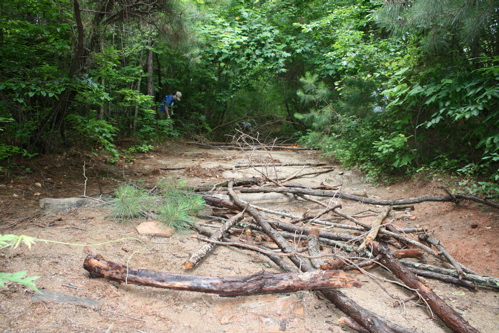 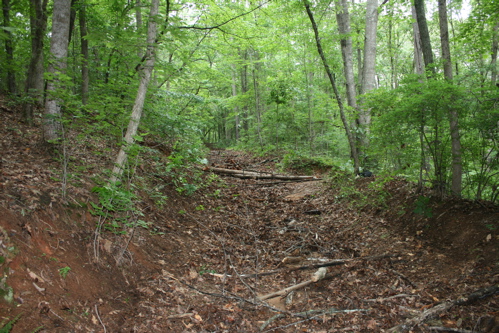 Some die-hard Sope Creek riders will probably be disappointed to see the steep, rocky trail sections replaced with bench cut smoothness but the reroutes had to be done to address some serious erosion issues. It’s rare to see mountain bikes allowed at all on trails managed by the National Park Service like those at Sope Creek and the good news is that there are plans to build a brand new loop / network of bike trails in the park as early as this fall. 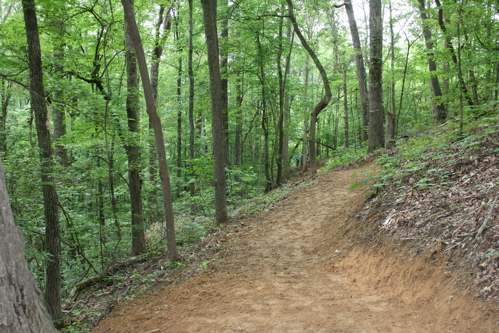 Long Cane Trails LLC did the initial machine work on the reroutes.

At the end of the day the volunteers were able to open at least 2 new trail reroutes which was honestly really satisfying. I managed to get a quick ride in on the new trails (“first tracks” as snowboarders would say) and I gotta say these new sections flow much better than the old stuff. I also ended up working with singletracks member GoldenGoose and didn’t even know it until afterward – small world (see if you can pick him out in the second photo above).

Even if you didn’t get a chance to help out in your area on Saturday, make a point to help with trail work at least once this summer – contact your local MTB club to get involved!

In Colorado check out http://www.volunteeroutdoors.net. There is always a project going on somewhere.

WOW, a direct link AND an action shot in the MTB blog all in one day. Now I feel like the celebrity!

Which one is you Goo?

Dark blue basecall cap and blue shirt pulling down the dead tree in the second picture.

Jeez, my bad, I meant to write Goose. I guess I got cut off after the second O. Sorry for my fast and illiterate fingers. :>)

[…] to give trail work a try. A few years ago I participated in a National Trails Day work party that included nearly 200 volunteers! Don’t miss […]