In 2014, Singletracks published an article rounding up the Top 10 Mountain Biking Cities.  Since then, we have published more in-depth coverage on some of them, but I hadn’t really realized we had not yet given more insight into what made Colorado Springs, my home town, so special to singletrack devotees.

When I retired from military service in 2010 and settled for good, the quality, quantity, variety, and accessibility of singletrack was a prime consideration in choosing the location I would make my permanent home. Colorado Springs has all that in spades.

Many not so well informed ask, “Why not Denver?” and the answer is simple, at least when singletrack is a higher priority than big city amenities: Colorado Springs is easily a match for Denver in terms of quality, quantity and variety of singletrack, easily outpaces Denver in terms accessibility, and to top it all off, with a metro area less than one fourth the size of Denver, there’s rarely any concern about the type of overcrowding that plagues the most popular venues next to the bigger city.

While Colorado Springs’s history, tourism, and skyline are all dominated by Pikes Peak, which also makes an excellent bike ride, any discussion of riding in “the Springs” begins with Palmer Park.  Whether or not it is the “best” ride in the Springs is always a topic of debate, and it’s not the most characteristic of the area, so what makes it the sine qua non of Springs riding?

Two things: first, it is the ultimate technical playground with a huge fun-bang for your effort-buck and second, it sits right smack in the geographic center of the city.  It’s an easy drive from anywhere, and a huge chunk of the city’s population can simply ride there from their home.

We all owe a debt of gratitude to Colorado Springs founder, William Jackson Palmer, who bequeathed the land to the city in 1907.  For over a century, this collection of buttes rising from the city floor has entertained residents and visitors with its scenery and trails. In my youth, the park was a favorite with equestrians, and a working equestrian stable operates at the foot of the park to this day. In addition, the park has two leash-free dog areas, and on any day with nice weather, you’re likely to encounter hikers, trail runners, dog walkers, and families with babys in backpacks.

I know, this isn’t sounding a lot like a premier mountain biking destination, but rest assured, it is all that and a bag of chips. While everyone enjoys the park, cycling has become the predominant use, and for good reason—the terrain rocks, both figuratively and literally. And even with all that use, conflicts are virtually nonexistent.  Whenever someone tells me multi-use doesn’t work, I simply point to Palmer Park.

Despite being in the middle of the city, Palmer Park is a sizeable parcel at just over 730 acres. Within this preserved open space lies over 20 miles of named singletrack ranging from conveyor belt-smooth to “dude, not even Hans Rey could ride that!”  But be advised, the emphasis is on the more challenging trails, and beginners will find themselves doing small loops… or stepping up and pushing their boundaries rapidly outward. In addition to the named trails, Palmer Park also has nearly that much again in social trails and braids that take the rider to amazing feature after amazing feature.

Traditionally, the trail system has been anchored by nine main trails: three easy/green (Greenbriar, Grandview, Yucca), three rated intermediate/blue (Mesa, Kinnikinnik, Palmer Point) and three black diamond (Cheyenne, Edna Mae Bennett, Templeton).  But crazy rock gardens may appear on green trails, blue trails can range from easy-peasy to heart-in your-throat, and the blacks can run from only moderately-spooky to being only suitable for those with a combination of pro-level downhill and trials skills.

The 4.5-mile Templeton Trail is a perfect example of the latter.  Despite its short length, it will feel like much more and will tax you for every technical trick you know. It is equally rideable (or unrideable, depending on your skill level) in either direction, and no matter which way you go, you will dismount, probably multiple times, but it’s so worth it.

Further complicating the riding here is that these trails merge with each other, fork apart, and intersect in such a manner that it’s hard to keep track of what’s what. Many intersections are marked, but even more aren’t, and simply pointing your bike down a trail marked for your level in no way guarantees you’re going to get to do the kind of riding you’re looking for. Then when you add in all the newer, unnamed, officially rerouted, and unofficial social trails, it becomes the most confusing plate of psychedelic spaghetti imaginable.

But fear not: anything can be walked and, while it’s easy to get kind of lost, it’s impossible to get totally lost, with Pikes Peak always looming over everything to the west.  There are maps of various quality available, but this is the only one that really covers the park.  Even so armed, the new rider will have to have a sense of adventure and not get frustrated or easily confused. Better yet, hook up with a local. We are always happy to share and show off our favorite resource with visitors. A savvy local who has spent years exploring all the hidden nooks and crannies of the park will know where all the cool features at any level are, and how to link them all together into a coherent ride.

While it isn’t a destination ride in the sense of The Whole Enchilada or The Downieville Downhill, hardcore riders travel from far and wide to hit Palmer Park, and most end up wishing they could do it more often. When done with the right attitude, it is both an exhilarating and humbling experience. It is the type of place that warrants repeated visits and encourages any adventurous rider to get better. It is the place that encouraged me to buy body armor. It is the place that encouraged me to take a skills clinic. It is the place that begs me to come back even though I live 20 minutes away and I have world-class epic singletrack loops available 100 meters from my front door. It is a place that every aggressive or skilled rider should pilgrimage to at least once, even if it isn’t in a big-name biking destination like Moab or Pisgah.

Despite sitting in the heart of the city, Palmer Park is not in the immediate vicinity of great bike shops or post-ride establishments. Everything hip or bohemian is out west, and all the new growth is up north. Two big box stores, Performance Bicycle and Bicycle Village, lie to the north on Academy Blvd, the Springs’ main vein for north-south travel.  Similarly close, but a little harder to find are two small, locally-owned shops, Ted’s Bicycles (a nice little family bike shop) and The Hub (another nice little shop with great service and best of breed fat bike/plus size knowledge), either of which is worth a visit if for no other reason than they are active in local advocacy and are passionate about people having good times on bikes.

When the ride is done, the closest brewpub is Great Storm Brewing, about a 10-minute drive.  Heading either north or south on Academy Boulevard will take you by a pretty standard lineup of chain restaurants, as well as a few independent joints serving up good grub.  My personal favorite, lying almost adjacent to the park, is Saigon Springs, which serves up very tasty Vietnamese noodle bowls for a reasonable price, or a little further north, Mirch Masala, where you can gorge yourself senseless on an excellent daily Indian lunch buffet (the buffet is also available for dinner on Thursdays and Sundays), or order any Indian delight off the menu. 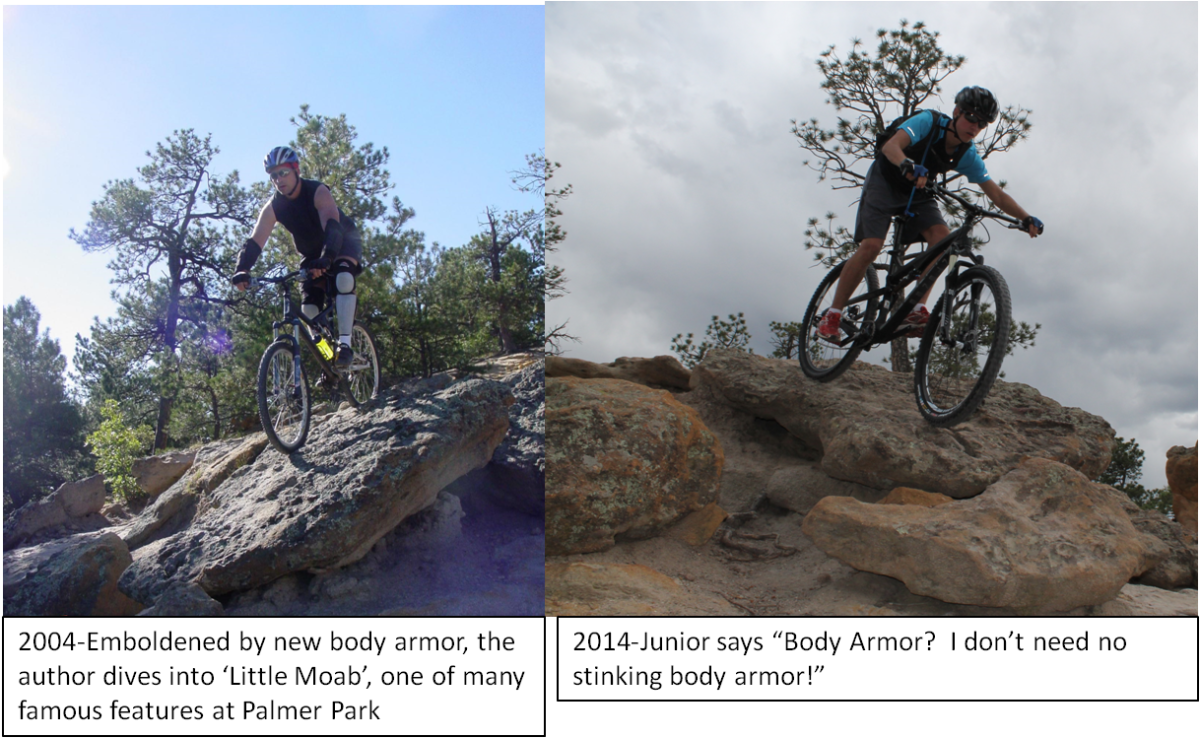 Mountain Bike Podcast
Fabio Wibmer Talks Confidence, Perfection, and Inspiration [Podcast #272]
Trails
Video: Trail Ninja: Riding England's Finest Trails, Whatever The Weather
Trails
10 Trails You Like More than Me
Trails
10 Trails I Like More Than You

Great article! Thanks again for showing me some of the local lines at Palmer Park, John. I need to get back there again! Maybe this fall?

Any time, Greg!
And if you still haven’t been to Ute Valley or Cheyenne Mountain State Park, we’ll make time to hit those as well. Tomorrow’s article should whet your appetite . . .

Yeah those are definitely on the to-do list! Also, realized I don’t think I’ve done Section 16 yet…? Need to remedy that as well.

So many trails, so little time!

Great idea for a series John, and Palmer is certainly a great start. Palmer is just minutes from our home in the Springs. When I’m in the States, I usually ride it once a week or more, but it still surpasses my skill level and I love it for that. I also frequently run Palmer. Templeton certainly makes for a tough a run too, but soooo interesting. Be careful of the bee hive on the north side of Templeton. That thing has been there for years now. I think it’s cool, but I’m surprised the City hasn’t removed it. Those bees really get agitated on a hot COS day.