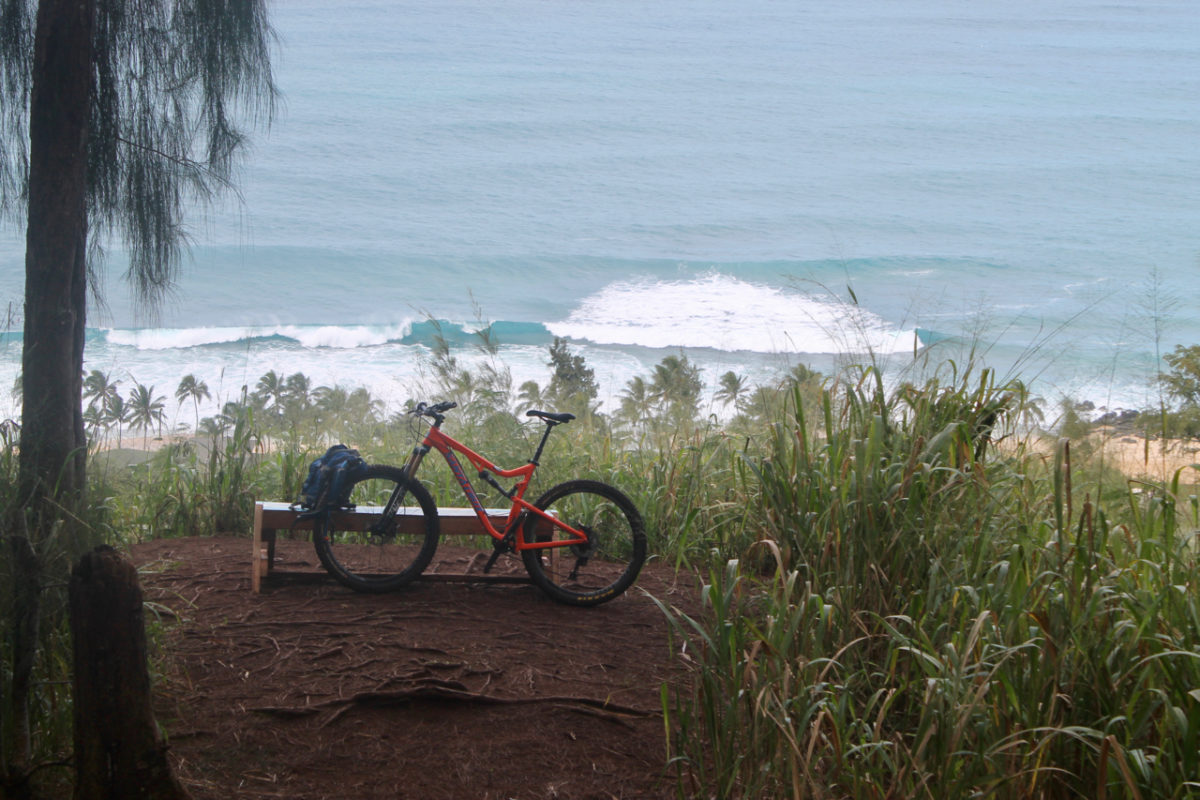 As the child of a lifetime airline employee, my eventual wife had the benefit of free travel, and her family made regular trips to Hawaii.  Then she grew up, married me, and I took her to exotic places like Ohio and North Dakota instead.

While many know me as a knucklehead with a sometimes unsafe attraction to extreme sports, I’m perfectly happy to plant myself in the middle of the continent and never approach any body of water deeper than I am tall.  I also prefer cool, even cold, and very dry climates.  Warmth and humidity are the enemy.  But as my wife and I crept close to three decades together, I agreed it was time to make the trek out into the middle of the biggest ocean on this big blue ball, and we would do it as a complete family of five.

What we ended up with when we mashed everyone’s schedules together was five nights and four full days on the most popular of the Hawaiian islands, Oahu.  Four days?  Sounds like four bike rides to me!  I would be able to hit all the big name rides on the island in that amount of time.

But, as is so often the case, my grandiose plans far exceeded what was wise under the circumstances.  This was a family trip after all, and ditching the family every day was a bad idea.  While the island is small, travel around it is anything but efficient, with a few overburdened arteries further congested by construction.  Combining drive time and riding time pretty much shoots the whole day.

Moreover, not only did I need to do things with the family, I needed to do Hawaii things, and mountain biking is pretty far down the list of things unique to our little tropical volcanic outcrop.  So after making time for the beach, Pearl Harbor, the Dole Pineapple Plantation, and snorkeling, I skinnied my riding ambitions down to a single ride and, based on various inputs, selected the popular Pupukea Trail as my Hawaiian singletrack sampler.

Hawaiian bike logistics for a visiting mountain biker aren’t exactly easy.  There’s not much in the way of rentals, and the rental locations aren’t near the best trails.  Rental cars are very pricey on the island, and good luck fitting a bike in one.  There is a bus system that covers the entire island, and the buses have bike racks, but these buses also go very slow and make a lot of stops, eating up precious time.  No matter how you slice it, getting a rig and getting it to the trail will present a little more challenge than at home.

Based purely on my preference to rent a Santa Cruz vs. the usual Specialized, I picked up a bike from Hawaii Rides, which sits in the town of Wahiawa, midway between our family base in Waikiki and the island’s north shore, home of the Pupukea Trail.  Upon my arrival, I was surprised to see that Hawaii Rides is actually a motorcycle shop that runs a fleet of mountain bikes as a side line.  But the place is serious about pedaling, just as they are about throttles.  Given my size and riding desires, rather than putting me out on one of the standard Heckler’s, the shop owner saddled me up on his personal 5010.

The trip from the shop to the trail, while short in distance, was long in time.  Between some dreadful traffic made far worse by roadside mowing which took the already narrow highway down to a single lane, and getting caught behind tour buses that couldn’t climb hills faster than 15mph, I got plenty of wheel time before hitting the Pupukea neighborhood where I would begin my climb up from the oceanfront to the mountains where I would begin my ride.

As time wore on during the drive, I also came to realize one of my worst fears for the day:  rain!  While Waikiki was again sunny, the north shore was under a very heavy cloud that was dropping mild, but consistent, drizzle.  Living in Colorado, I’m very used to extreme weather variations in short distance, but that’s because there’s all these 14,000ft mountains in the way.  This phenomenon was quite a shock on an island where most of the mountains struggle to reach a mere 2,000 feet.  Yet another lesson learned in climatology.  Knowing the local soils didn’t drain like my native Colorado gravel, I feared I would have to call off the ride and had wasted the $$ on a rental for nothing.

As I climbed higher toward the trailhead, the streets were indeed getting wetter, but I held out hope that the trail wouldn’t be so bad. The trail entrance is a sharp drop through tight trees and I figured if that looked okay, the rest of the ride might still be doable.  Having navigated that initial drop with no fuss, and upon looking back and seeing no rut in the dirt from my tire, I figured it was okay to press on.

The initial climb, which can be done on your choice of a combination of old doubletrack and new singletrack (they intersect and fork multiple times), was reputed to be a toughie, but it’s never terribly steep and I found it easy to find a rhythm. Maybe the benefit of living at 6,000ft and riding at 1,000ft?  Before I knew it, I was at the top, and had only encountered a couple short slick spots along the way.

After grabbing a nibble at the top I was eager to hit the highly=praised cross country and downhill trails.  Immediately after dropping off the top, the trail had excellent flow, bobbing and weaving through the tropical trees, occasionally enhanced by a moderate, but well-placed berm.  For long sections, the predominant flora was pine, and the covering of needles did an excellent job of keeping the trails dry enough to ride without fear of either trail damage or wipeouts.  The Santa Cruz 5010 was proving to be a perfect Hawaii bike, being light and efficient enough to make short work of the climbs, yet having enough suspension to roll over the incessant tropical roots.  This was really turning out to be well-worth the effort! 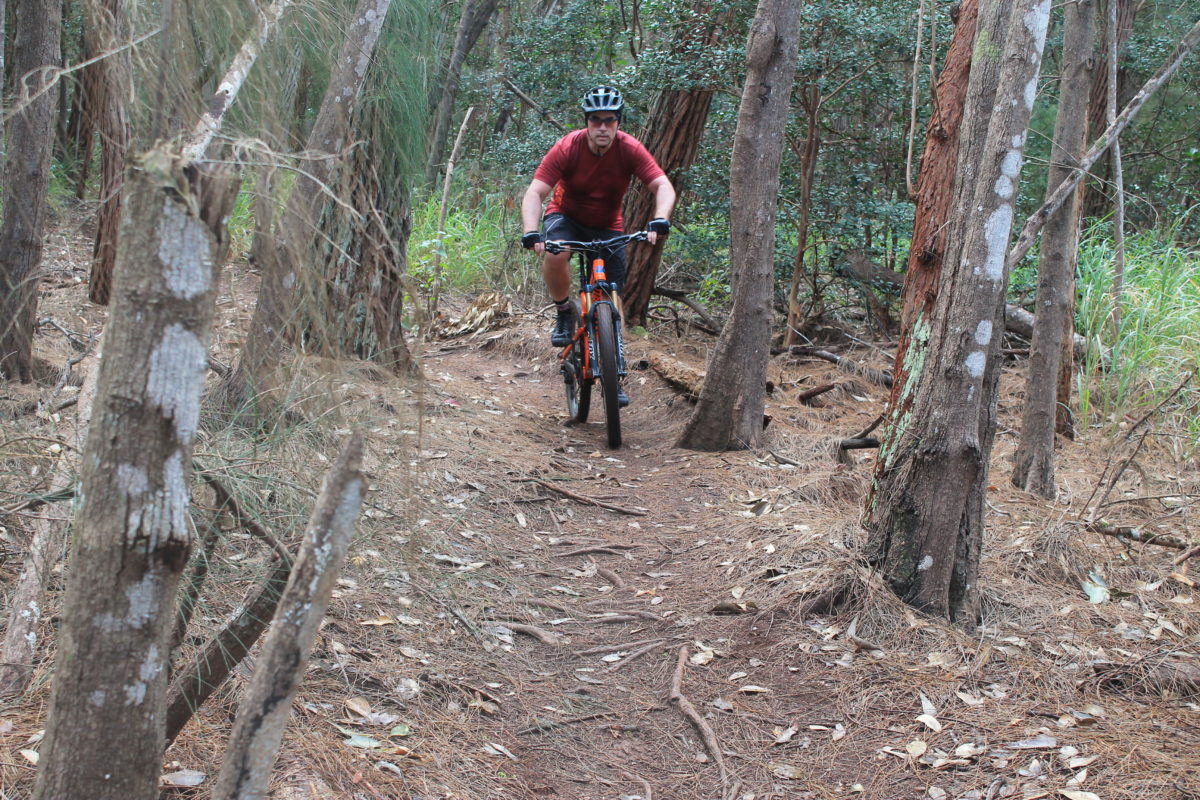 The Pupukea Trail isn’t so much a trail as it is a rather complex network of trails in the Pupukea-Paumalu Forest Reserve.  There are intersections and choices to be made constantly and without a local, each one is something of a crapshoot.  Most intersections were posted with crude, homemade signs indicating trail names, but there were no maps available of this hodgepodge.  At one point, I decided it was time to take the downhill option, mostly because it looked totally rad.  I remember seeing a sign labeled “Party Line” and ripping some righteous downhill as the trail plummeted into a very steep drainage.  This stretch included a couple large, perfectly banked wall rides, but given how slippery everything had become, I opted out of the feature.

After riding around the wall and dropping a little more, things got really interesting as I entered “Bs Trees,” which followed the bottom of the drainage.  The trail dipped back and forth across the drainage, Kessel Run-style, but this was nothing like Kessel Run.  The dips were sharper, the sides of the drainage steeper, and the turns tighter—this was serious halfpipe riding.  The other way it was different from Fruita’s famous flow?  Moisture.  Here, there were no needles protecting the surface, and the red dirt had become as slick as hot snot coated with silicone.

Physicists will tell you there’s no such thing as perfectly frictionless surface, but I beg to differ!  This was completely and utterly unrideable; so bad that after a short distance, I decided it was better to hike-a-bike back out than to venture forth not knowing how long this went on or what I might find at the bottom.  Just walking up the serious incline was a challenge, let alone doing it while pushing or carrying a bike, and more than once, I found myself back horizontal, sliding hopelessly down the deep red snot.

After getting back to the needle-protected trail, I positively relished the rest of the climb out, simply because it was possible.  I continued to poke around another couple hours, exploring as many forks as I could, but never again heading back for that particular drainage.  Getting hopelessly lost was never a concern, since all one needed to do was head west at any time to get out of the woods, so to speak.

Part of the ride ran along a bench cut with occasional views of the west shore and the Pacific beyond; quite a change in scenery for this Colorado boy, especially in January.  In the end, the ride was challenging, sometimes frustrating, totally unique, and quite well worth it.  I would have loved the opportunity to have hit the other rides on my wish list, including Ohana, Maunawili, and Peacock Flats, but Pupukea was the perfect one-trail Hawaiian mountain bike experience!

Hey, honey, how’d you like to go back to Hawaii?  Seriously.

Hope you also took advantage of enjoying some REAL shaved ice (with some ice cream inside) while on Oahu……another great reason to return in the near future.

As you mentioned, we also learned while hiking Kauai (wettest place on earth allegedly) a few years back that the mud there really stains and is slicker than goose poop on teflon.

I’m glad that you got to experience riding out there as well. It’s always exciting hitting up new places. I had a blast years ago when I took the Kealia Trail down to Dillingham Airfield. The scenery was priceless! Take care.

Hawaii Rides was my bike hookup as well and they were excellent to deal with, good people. I had the good fortune to meet up with a group at the Pupukea trailhead who showed me around. Having a local who knows the twisty maze definitely improved the experience. That slick red clay has some slippery competition in the thick layer of little round pine cones that carpet some sections of the trail. Those things were like marbles on the floor in a Tom and Jerry cartoon. Super fun trails. I was also able to enjoy Turtle Bay (tame trails on a big beach resort) and the Ohana trails while visiting, definitely worth going back for those. If you want to share the joy of biking with a spouse or your kids in a convenient and accessible set of trails in a beautiful setting, Turtle Bay has easy but fun trails and plenty of beach to ride along.

This article makes me want to go back and ride my bike in paradise.