Normally, if you wake up and it’s snowing outside and the mountains are covered in snow, you’re not going to go ride your mountain bike on your own. But if you have seven other idiots to go with you, it’s a whole different story.

On the shuttle ride up from the airport the previous day, it started snowing lightly as we climbed in elevation… and the snow didn’t let up until the middle of the next day! Still, we were all in Park City, and we were going to ride our bikes, dang it!

Six of us media dudes had flown in from all over the nation to ride in Park City, but a few hadn’t gotten in until late the day before. Since the late arrivals still had to get kitted out on bikes, we began our day by hanging out at White Pine Touring.

Our main point of contact for our entire trip to Park City was Scott House. Scott is employed by Jans (essentially a local chain of bike shops) as their communications, events, and social media director. Oh, and he also guides every now and then, teaches avalanche courses in the winter, and works with the city… basically, Scott is the jack of all trades. 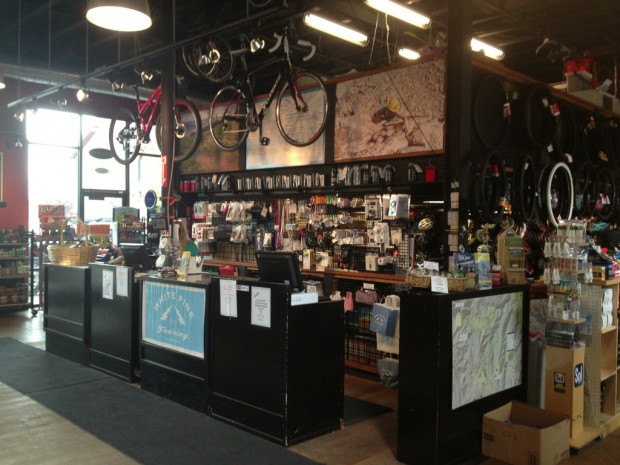 White Pine Touring is a shop in Park City that is owned by Jans, but it seems to operate mostly as an autonomous entity. While all of the Jans shops are excellent, White Pine seems to be the true “core” shop. In addition to retail, repairs, and bike rentals, they also offer plenty of additional services such as bike and avalanche lessons (depending on the season), and guided trips. 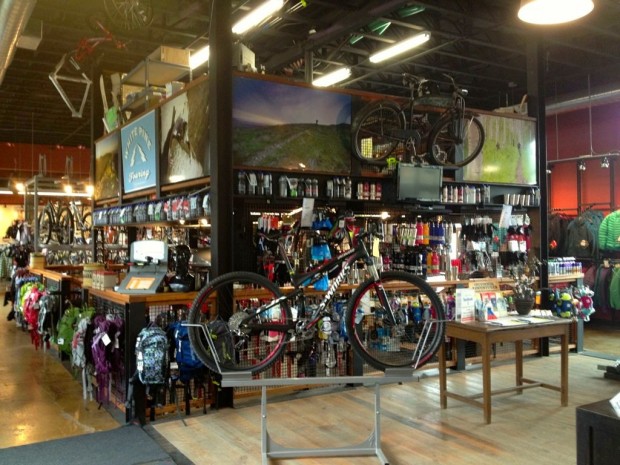 Over the course of our media trip, we got the full-blown guided experience. Scott, who was instrumental in orchestrating and coordinating this trip, rode with us every single mile of the way, and we usually had between one and four other guides along for the ride. Stu, one of the other guides that rode with us regularly, was also extremely knowledgeable about the local area, and is also employed at different times of the year as Park City’s trails intern and a ski patroller at Park City Mountain Resort.

While White Pine has a solid rental fleet, they’d been used and abused all summer. So Scott House pulled some strings, called up some contacts, and got brand-new 2014 Scott mountain bikes fresh off the Interbike showroom floor shipped up to Park City for us to thrash for the week. I had the immense pleasure of riding a Scott Genius LT 700 Carbon 650b for the week, and it was superb. Be sure to check out my dedicated review post. 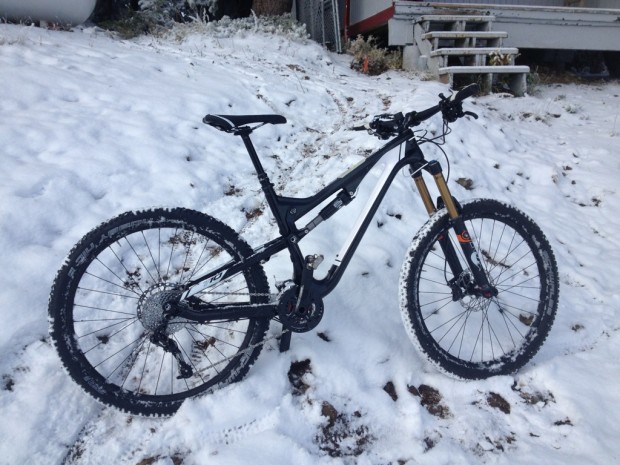 For our first ride of the day, the fantastic folks at White Pine loaded us into a van and shuttled us to the top of 9,700ft Guardsman Pass. The uplift was much appreciated, as we gained about 3,000 feet from the 6,800ft elevation of Park City. Once we hit the trail, we climbed to over 10,000 feet before descending. 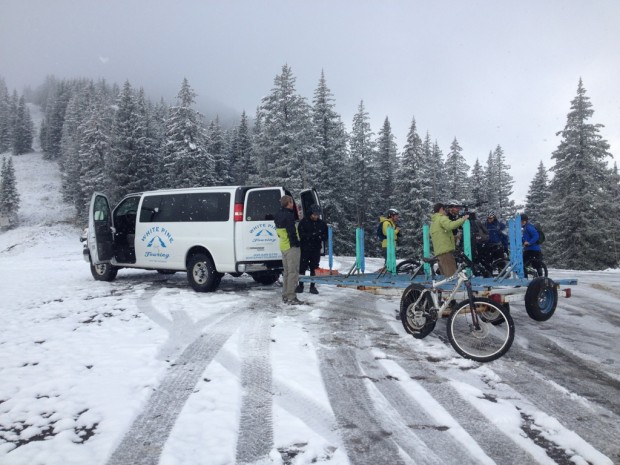 I knew we were going to be in for an interesting ride when some snowboarders drove up, parked in the Guardsman Pass parking lot, and began to unload some rails and setup a jib line. Yeah, the Wasatch locals were already thinking snow season… but we weren’t done biking yet, not by a long shot!

Our climb began with a short, steep, snowy ascent that quickly turned to hike-a-bike. Thankfully, the 300 feet of elevation gain went by quickly, but it offered up some cool photo opportunities: 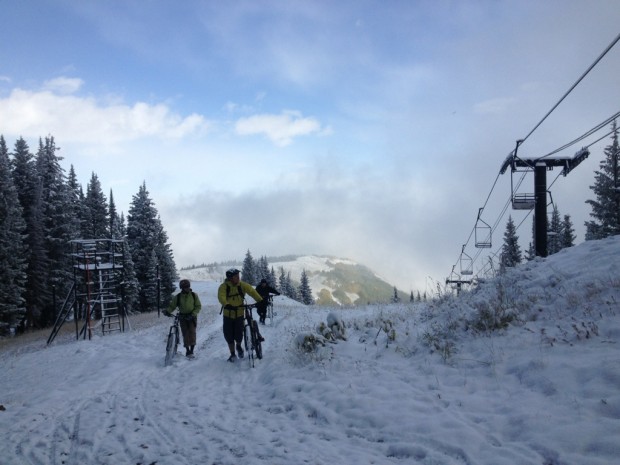 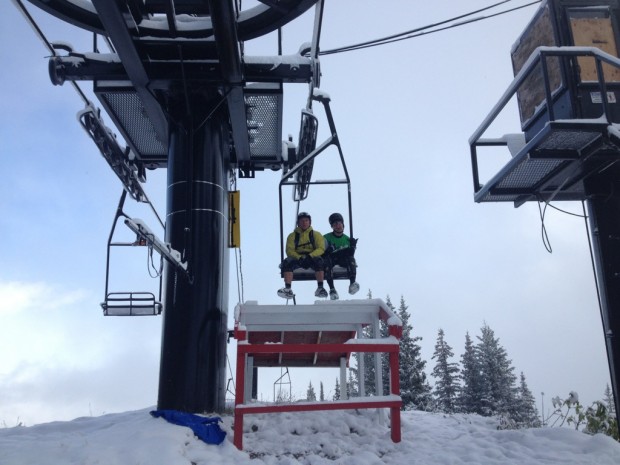 We began our descent down a steep, rocky, snow-covered two-track, and one pinch flat later (not on my bike… yet) we made it to the singletrack.

The high-alpine section of singletrack we rode traversed through some gorgeous terrain. We slid along in four inches of powder snow, soaking in the views. Several of us enjoyed spills off the bike, which were much more forgiving thanks to the powdery landing. 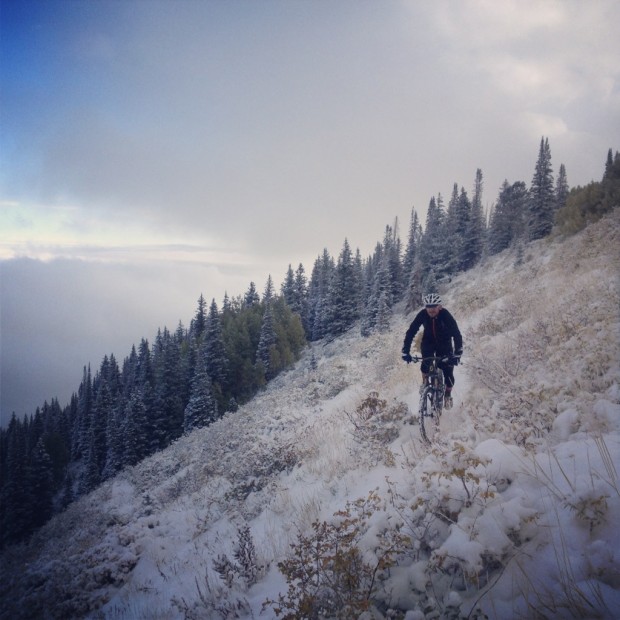 While part of me was a little apprehensive, thinking we weren’t getting a true feel for the riding that Park City had to offer, I took a step back and realized the uniqueness of what we were experiencing. Since we were riding in the first snow of the year, and the powder was so light and fluffy, traction was a tad slippery but surprising grippy all things considered. As the clouds cleared up, the scenery was absolutely magical, with the fresh blanket of white snow, the greens from the pine trees, and the golden leaves of the aspens that were just turning colors.

In fact, I think the group as a whole quickly decided that while this wasn’t the same as riding dry dirt, we wouldn’t trade this experience for anything! We collectively decided that this was an “all time” mountain bike trip, and one that we might never quite replicate! 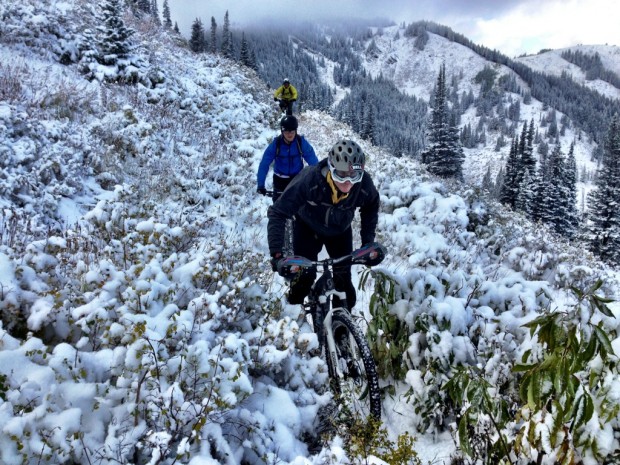 As we continued our descent, we dove into some tight aspen groves and slalomed around yellow-leaved trees. The snow began to thin out under the trees, and as we dropped in elevation, we soon reached dry dirt. While we had been riding in a winter wonderland up high, it was good ‘ole fashioned fall singletrack shredding down low. 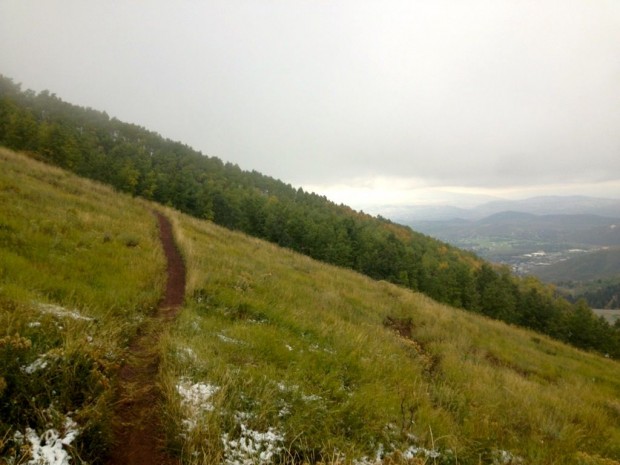 We kept on ripping down through Park City Mountain Resort, with tacky hero dirt that was so fantastic we just couldn’t stop for photos. In my opinion, that’s the best kind of riding!

Since the trail system around Park City is so complex, I had to ask our guides after every single trail combination that we rode exactly which trails we had just ridden. There are so many options and so many turns, one could easily get themselves royally lost without a map. Thankfully, we had tons of expert local knowledge to draw on. Our first ride began at Guardsman’s Pass, headed up the Jupiter Peak Road, down Dead Tree to Apex, Keystone, Webster Road, Link trail, to the Mid Mountain trail, to Empire Link, Daly Grind road, Prospect Ridge trail, down into Old Town, and then the Paved Poison Creek trail back to White Pine Touring.

Food and drink were an important part of our daily Park City routine, and after rolling back to White Pine we threw some of our wet layers in the washing machine, and then walked next door to Sammy’s Bistro for some lunch. While they served everything from sandwiches to steaks, I chose to consume some delicious pork chops and some coffee with Bailey’s–the perfect drink to warm up after a cold, wet morning.

After grabbing some lunch, we hit up shuttle two for the day. We shuttled up the same road, but didn’t go as high as Guardsman Pass this time around. 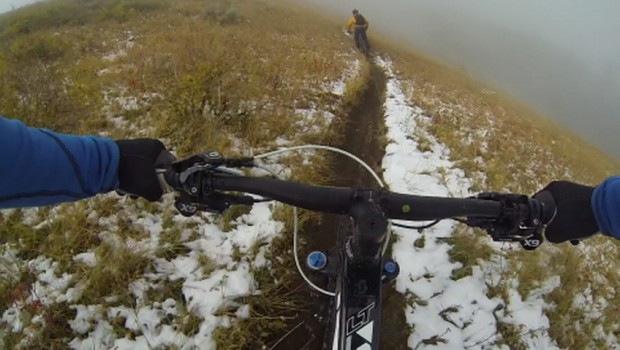 The second shuttle run actually began on the Deer Valley Resort side before quickly running over into the Park City Mountain Resort & Old Town area. Our next route took us on Corvair, to TG, to Payroll, to Mid Mountain, to Crescent Mine Grade, to Eagle, to Spiro, and then back into town.

The upper section of this route on Corvair, TG, and Payroll was more aggressive and entertaining than most of the XC trails we had ridden earlier in the day. This flowier, rockier nature might be due in part to the recent construction of these sections and updated construction techniques. This combination of trails offered rocks and drops aplenty, with huge, flowy, wallride-esque turns swooping down the mountain at mach 10. 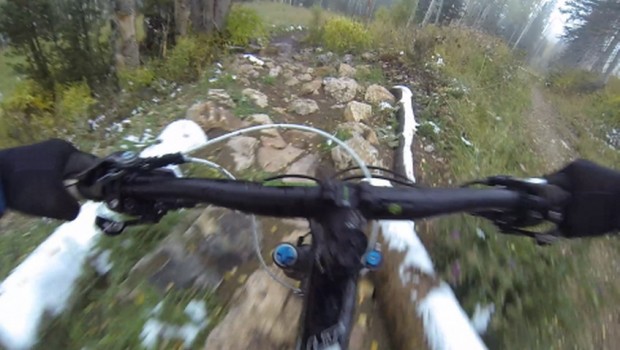 Unfortunately, somewhere around mach 7, I flatted on the rocks and had to stop and change a tube. I hopped back on the bike, kept on pedaling, and about five minutes later I flatted on a drop. I stopped, took some time to evaluate, and realized I had torn the Schwalbe’s sidewall. This was the second of three Schwalbes I would tear on three different bikes while riding in three different cities in three weeks’ time. Anyhow, we did a ghetto sidewall repair, and carried on across the mountain.

After lunch we had broken up into two different groups, as one group was very concerned about setting up some serious photo shoots. Maybe it makes me a bad journalist, and maybe once I get a DSLR I’ll magically transform into a professional photog, but I was more concerned about getting some serious shredding in. So, I made up one third of a small group of three: Stu, our awesome guide, plus myself and MTBR’s own Angry Singlespeeder (just call him the ASS). The route we rode the second half of the day was much climbier, and needless to say I was sucking wind trying to keep up with the singlespeeder’s anger and Stu, who just so happened to be riding a singlespeed. Yeah, I don’t ride a singlespeed, ok. 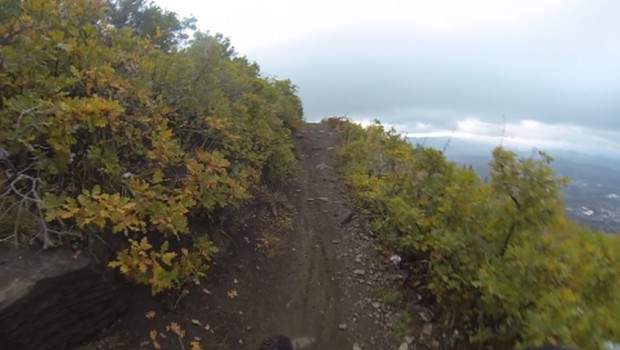 After that pair of flats, we hooked up with the Mid-Mountain trail and rode across the mountain, and right before a viewpoint, BAM! Would you believe it? I pinch flatted on a rock. Thankfully, we had a fantastic view as we changed my third flat of the ride.

After a third flat, I voted that we get back to town sooner rather than later, so we hooked up with the Crescent Mine Grade and dropped back down to Park City.

For a compilation of select GoPro clips from the second shuttle, check out this video:

That evening we went out on the town for a nice dinner at a restaurant that, in normal circumstances, I would only ever visit on special occasions–say, Valentine’s day or my wedding anniversary. The restaurant in question was Zoom, a Sundance Resort restaurant that’s owned by Robert Redford.

The food and the drink were both fabulous, if you have the coin for it. I enjoyed numerous local beers, delicious appetizers, and a delightful roast chicken as my entree. And while it was spendy, this wouldn’t be the most expensive restaurant we ate at on our trip…

Conclusion: Schwalbes suck. I know lots of folks who love how they ride, but almost all of them end up torn long before worn out, and are replaced by something from another manufacturer.

Incredible photo’s and article, had to be one amazing epic ride. Definitely putting this one on the bucket ride list…

It was fantastic, and I highly recommend it!

I LOVE riding in freshly fallen snow. The two-wheel drift is very predictable and TONS of fun!

Looks like a great time. Cool pics and video. I’m glad you let go of your pre-conceived notions of what the ride SHOULD have been and embraced what it WAS. I have found doing just that can create awesome experiences and memories.