As I pounded my last tent stake, the first plump, squat drop hit me square on the snout. Distant thunder and lightning had played at the edges of our ride in on the Arizona Trail, but I’d been too taken with the scenery to notice. We six guests and two guides scurried around like ants on a pan trying to batten down in advance of the deluge. Tent poles pointed hither and yon, flat spots were hunted, cleared. Small hectic shouts could be heard from nearby “Other way! Other way! That one goes there—up! Wait!” My tent was coming together nicely, and I admit, I was pleased with myself. And that is almost always a grave mistake. Here, now was that thing I’d been meaning to fix. For three years. The pole thingy that holds aloft the rain fly had an internal elastic cord issue that made the last segment dangle off the end like a broken limb that makes you sick to look at. Feeling like a field medic performing a haphazard surgery, I stuffed and mashed ’til the thing held, at least for now, and made a dive for the relative shelter I’d erected.

I sat in my tent on the lip of Marble Canyon, just around the bend from and feeding into the Grand Canyon, clapping and squeaking with delight at what sounded like a rapacious argument amongst the gods. Great jagged bolts, fuzzy and sizzling at the edges, slashed downward, and thunder’s bone-rattling retort made me wonder—can the sky break? The waterworks, great beaded curtains of rain instantly forming tiny rivulets seeking the bottom of my tent, were short-lived, and I was grateful. Though we’d only ridden 14 miles that day, I looked forward to cocktail hour, dinner, and a campfire. While the packing list and trip info provided by Rim Tours made it quite clear that warm clothes were a must, my brain closed around “Arizona” “desert” and “summer,” and promptly instructed my body to leave my warm coat in the car. In St. George. Many miles away. 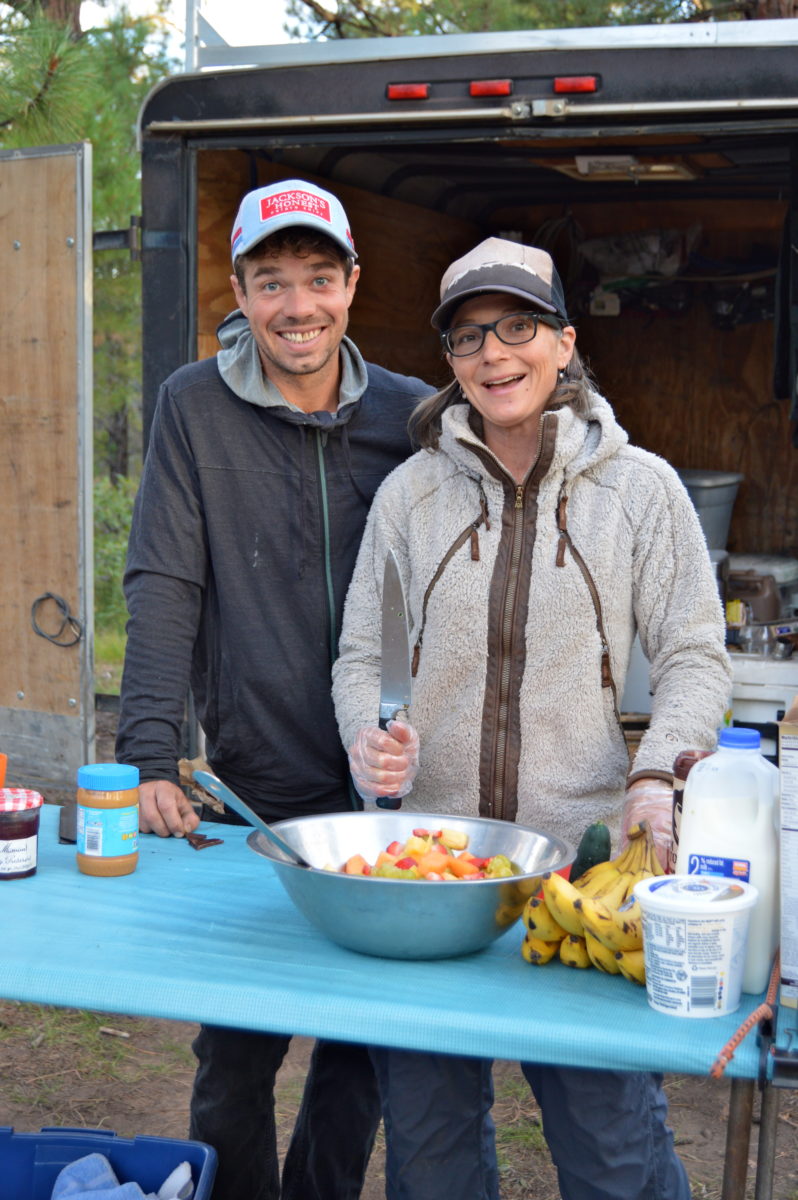 Rim Tours has been operating in this part of the world for over 27 years, and judging by my experience and the fact that one couple on the trip was returning for their fifth time, I’d say they’ll be in business for as many more years as they choose to be. Our guides for this three-night, four-day trip were Beth and Reid, who have both been with the company for many years. Both had a quiet competence that was a delight to be around, to ride with, to listen to. Our group had several guests who were not much used to riding “real” singletrack. In large part because of the “Hell Yeah!” attitude of these guests who laughed before, during, and after each tip over, each sudden loss of momentum due to rock-obstacle, but also in part due to the guides’ approach, the group gelled quickly and took on a bright sheen of happiness.

I’d picked up Edward Abbey’s Desert Solitaire for the trip, as I’ve come to love reading well-honed tales of a place whilst held in its embrace. While Abbey wrote of Arches National Park versus the Grand Canyon, they are similar enough to find a near-perfect rendering of the landscape in every passage. It was a delight to hear our guide Reid tell us that the scarcity of large predators on the Kaibab Plateau—coyotes, mountain lions, etc.—was due to Teddy Roosevelt’s desire for the area to become a hunting paradise. Hours later, hunkered down with my book, Abbey railed against this very thing:

“Unfortunately, most of the pinyon pines in the area are dead or dying, victims of another kind of pine—the porcupine. This situation came about through the conscientious efforts of a federal agency formerly known as the Wildlife Service, which keeps its people busy in trapping, shooting and poisoning wildlife, particularly coyotes and mountain lions.”

While we saw neither porcupine, coyote, or mountain lion, we did see plenty of deer, so I guess ol’ Teddy’s plan worked–at least on that front. 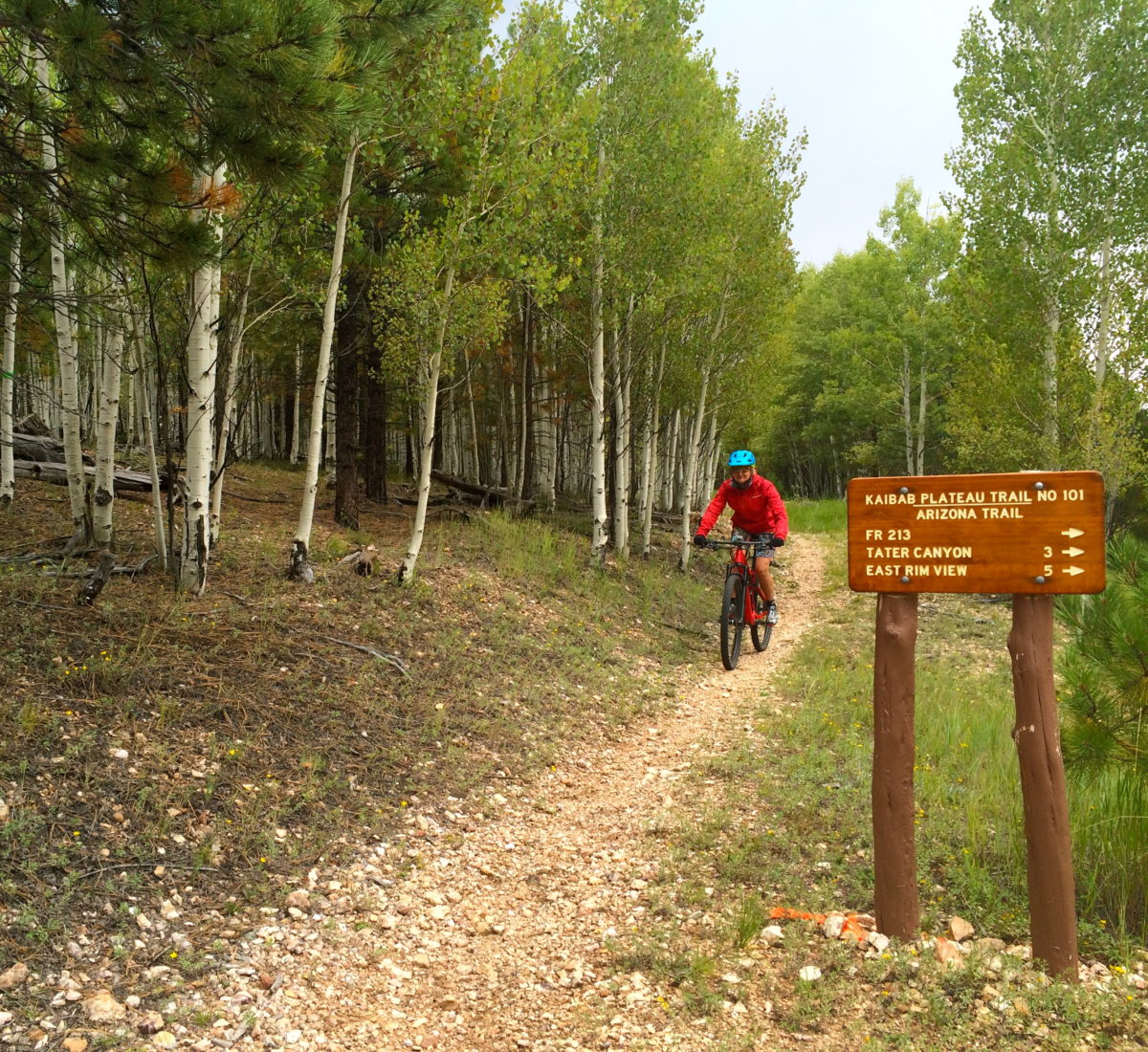 Days one and two we rode the Arizona Trail, a lovely ribbon of narrow, well-maintained hiking, biking, and equestrian trail crossing the state from end to end. From our start near the Kaibab Plateau Visitor Center, I was pleasantly surprised to dive right into legit singletrack, no signs prohibiting my presence astride my two-wheeled steed. I was also surprised to find lush meadows, forests of aspen and pine, where I had expected hot and dry red expanses.

Days three and four featured the Rainbow Rim Trail, equally skinny singletrack directly on the north rim with views into the Grand Canyon. While the most miles ridden on any of the four days was 25, these miles were at elevations of 8,000 to 9,000 feet—enough to add some additional gasping on the climbing bits. But there is nothing like finishing such a ride and coming back to a beautiful camp where someone else does the cooking, cleaning, schlepping, and logistics. 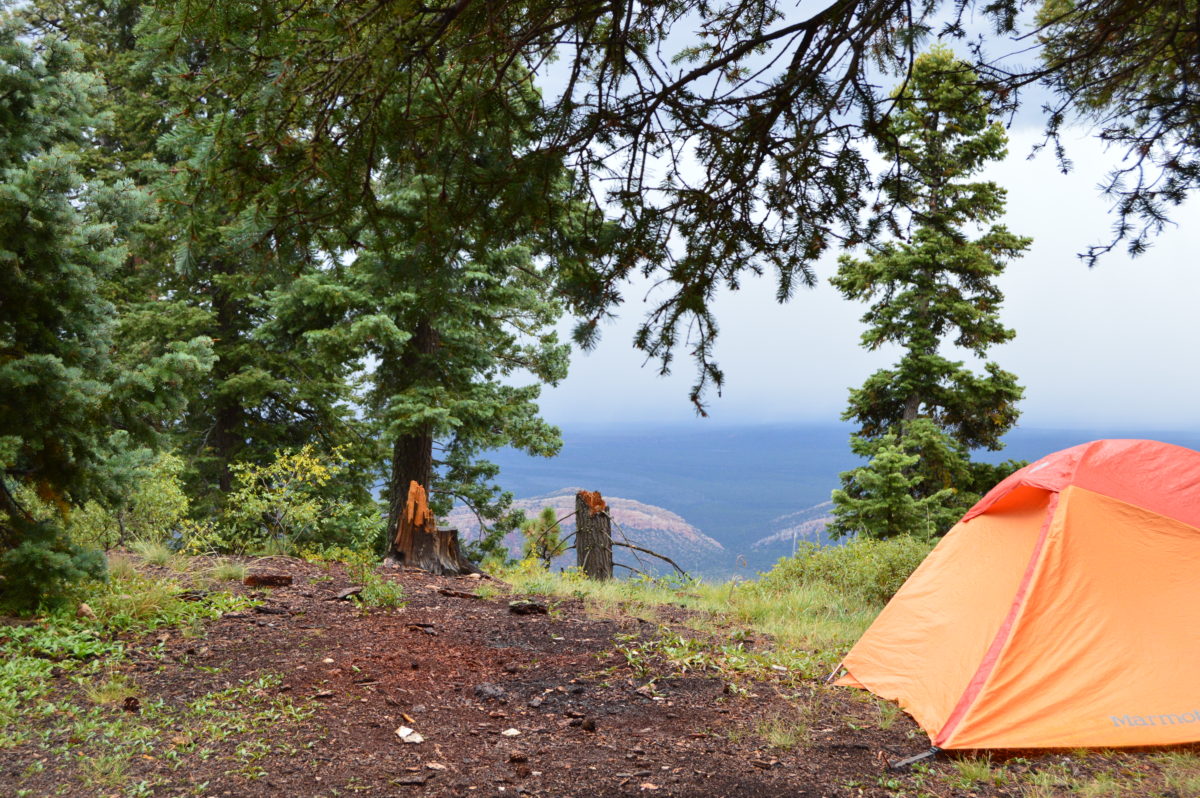 Rim Tours calls the Four Day North Rim Grand Canyon trip skill level “moderate, intermediate singletrack,” and I agree with that description. While for the most part the trails were smooth and lacked much in the way of technical challenge, there were certainly a few sections whose mixture of loose baby heads and rocking pinkish slabs caused a quickening of the pulse and the intermittent dab. And though these were few and far between, I’m loathe to give the impression that this trip would therefore not satisfy the more advanced rider.

Yes, it’s flowy and there’ll be no hucking, no gap jumps, and no hanging off the back having the rear tire hit ya where the good lord split ya, but I always say if it’s not technical enough for you, go faster. To me, this is the perfect trip for the couple that contains one hardcore and one newbie. There’s just no way the hardcore can’t love these trails, the views, the nature immersion, for this is the essence of mountain biking. For the newbie, yeah, maybe they do some walking here and there, but he’ll soon forget that part and become a convert.

While any food eaten while camping or backpacking is “gourmet” by definition, these guides were maestros on a camp stove. Salmon with a fancy green sauce, quinoa salad, brownies from a dutch oven, breakfast sandwiches with egg, bacon, and cheese, pancakes with fresh fruit, steak with chimichurri sauce. Eating breakfast accompanied by the quake of an aspen, the caustic croak of a crow, and the humbling immensity of the Grand Canyon. Riding the rim under the din of distant thunder, a spectrum of colors in use. The infectious laughter of fellow guests around the campfire, stories large and small. For these reasons among others previously listed, I’ll be back for another Rim Tours trip, and none too soon. 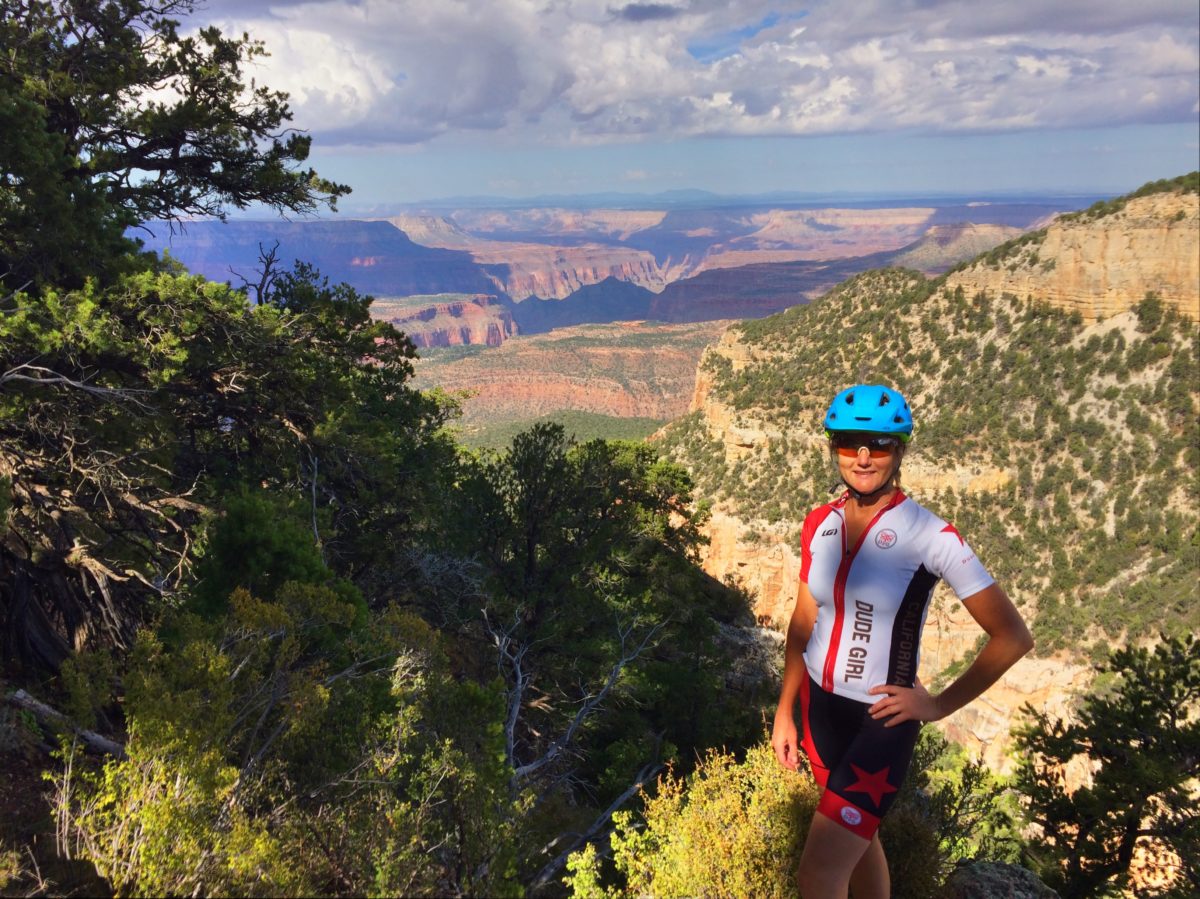 In closing, some more Edward Abbey for your reading pleasure:

“Dark clouds sailing overhead across the fields of the stars. Stars which are usually bold and close, with an icy glitter in their light—glints of blue, emerald, gold. Out there, spread before me to the south, east, and north, the arches and cliffs and pinnacles and balanced rocks of sandstone…have lost the rosy glow of sunset and become soft, intangible, in unnamed, unnameable shades of violet, colors that seem to radiate from—not overlay—their surfaces.”

Many thanks to Rim Tours for providing this riding writer with the North Rim Grand Canyon Four-Day trip.

Ahhh, Northern Arizona and the North Kaibab … there is nothing quite like it in this old world. Thanks for the story Maureen. I’ve wanted to ride that stretch of trail since the AZT opened. My wife and I lived in Northern Arizona for 14 years before moving to Mongolia back in 1996. The broad expanse of the open ponderosa pine forests and mixed conifer stands is truly captivating. I can understand how the biking might not be as challenging, but the overall experience in those forests lands is second to none imo. Those forests will always have a big chunk of my heart. I’m curious, how did you learn about this tour and why did you choose it? Also, did you do the last section of the trail to the Utah border? That looks like a pretty good prolonged DH and might get your bum over the rear tire a few times. =) I hope to someday ride from the North Rim to the Utah border … Gorgeous country with that nice prolonged DH finish.

Thanks Mongwolf for your spot on comments on the Kaibab–it was truly magical. We did not do the last section to the Utah border, only had four days. As to how I learned about it, I’ve known about Rim Tours for a long time, and this trip fit my schedule in addition to looking amazing and being a new experience for me. I’d only been to the South Rim with scads of tourists and RV’s and even that was a long time ago. The north rim is totally different and special.

Magical … … that was term I couldn’t think of. =) Yes, in terms of solitude, the North Rim is everything the South Rim is not. Such solitude, beauty and grandeur. There was a reason Roosevelt loved this place so much … in addition to the big mule deers and their asymmetrical racks. And though you did not see any cougars, it doesn’t mean they didn’t see you. =) There are a bunch out there.