After an mellow morning ride on the Lower Loop in Crested Butte, we returned to our campsite at the Oh-Be-Joyful campground for some lunch and a well-deserved break. Since it was our first full day in Crested Butte, I wasn’t about to let a full afternoon go by without getting at least one more ride in! We perused the guidebook, and settled on a ride that came highly recommended by Singletracks.com, the book, and the locals: the Dyke Trail.

We parked the truck at a junction in the forest service roads, and as we were preparing to hop on and start grinding up the gravel road, Andrew spotted a small group of riders pedaling through a grassy meadow just up the hill from us. They were heading in the direction we wanted to go, and they weren’t on the road… but there was no trail marked on our map.

What the heck. We decided to pedal up the opposite direction to see if we could find this mystery trail, hopefully increasing the singletrack-to-gravel ratio of our ride. 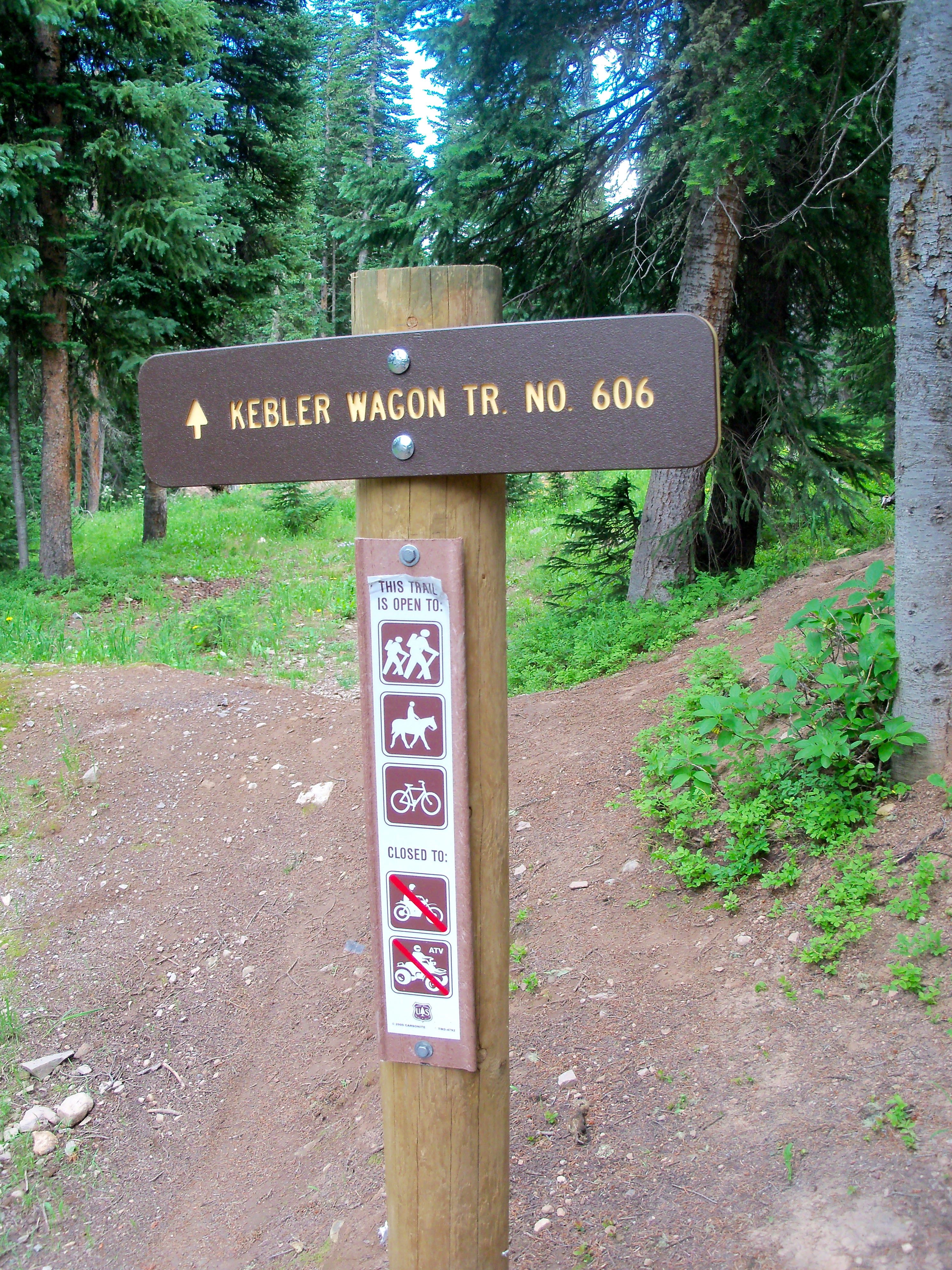 Mission accomplished! We picked up this narrow trail in less than a mile, turned, and started following it through the meadow. Marked as the “Kebler Wagon Trail” and clearly signed as bike-legal, this narrow strip of dirt obviously didn’t get much traffic. The thin slot of soil in the grass was rough and bumpy in places as if it lacked the traffic to create real flow. Nevertheless, it was easy to follow. 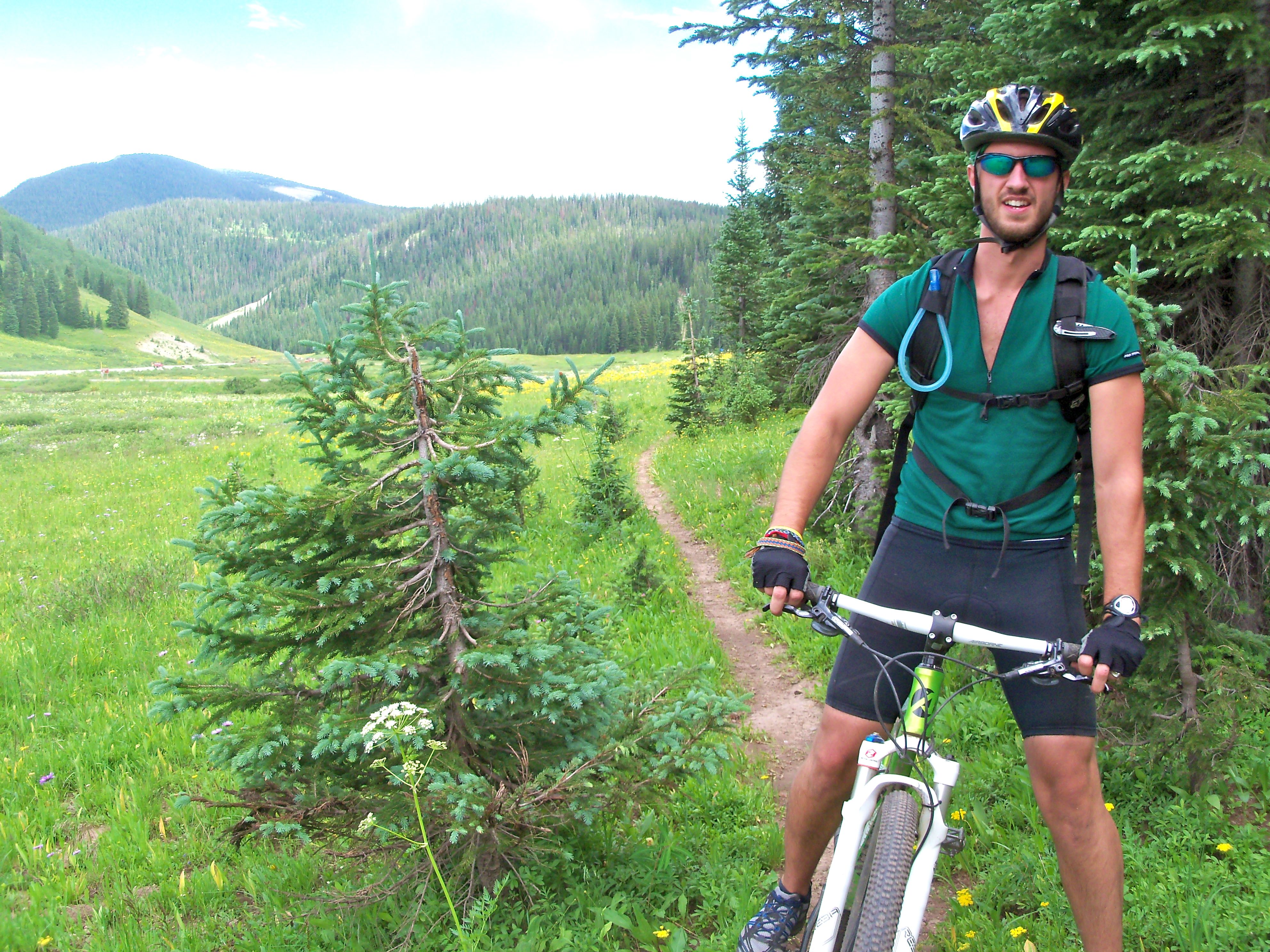 Andrew on the narrow Wagon Trail. 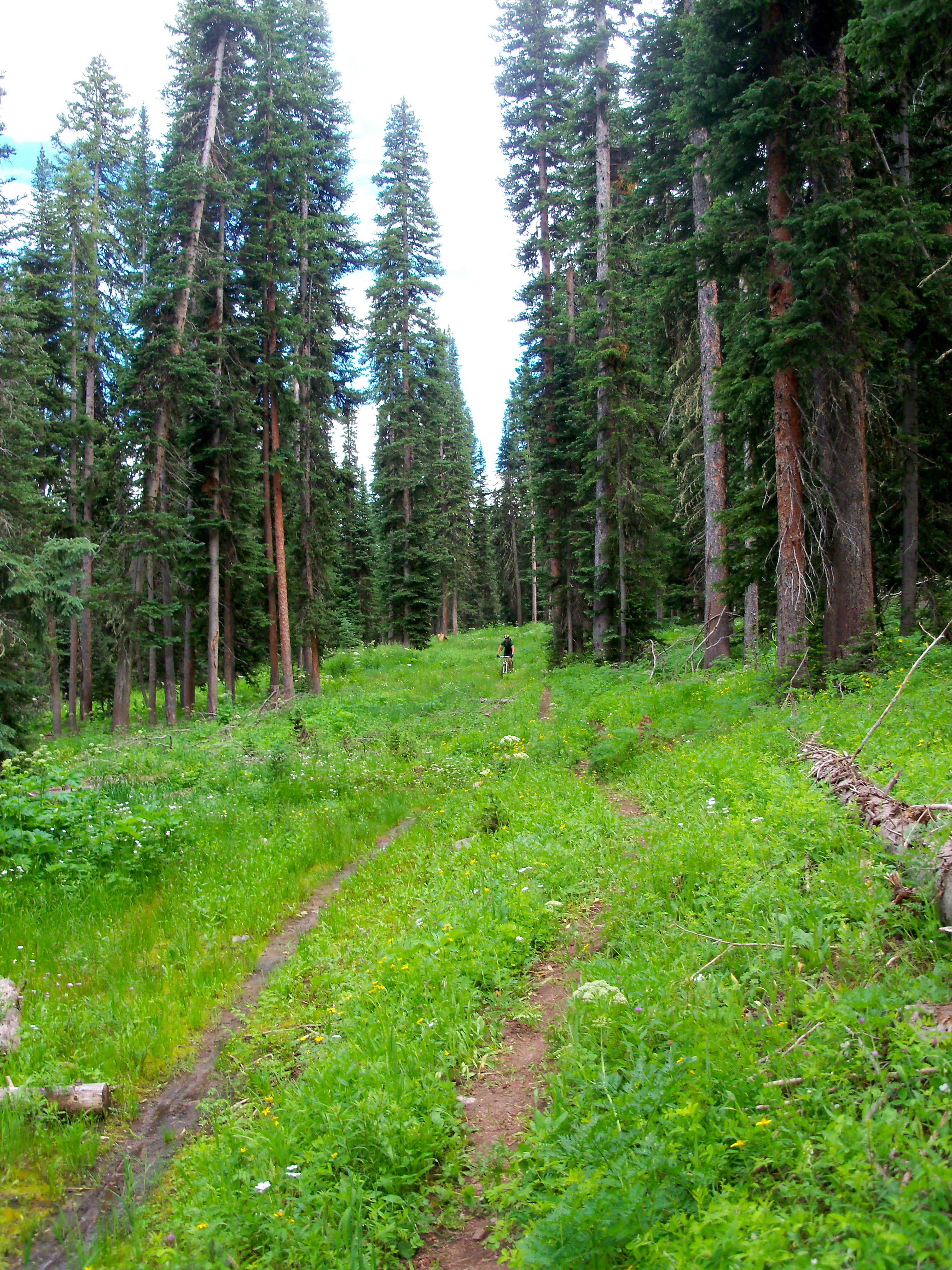 If it received more traffic, this trail would have ridden much better.

This section of the Kebler Wagon Trail only lasted for about a mile, and then it was back to the gravel road as we ground up towards Lake Irwin. 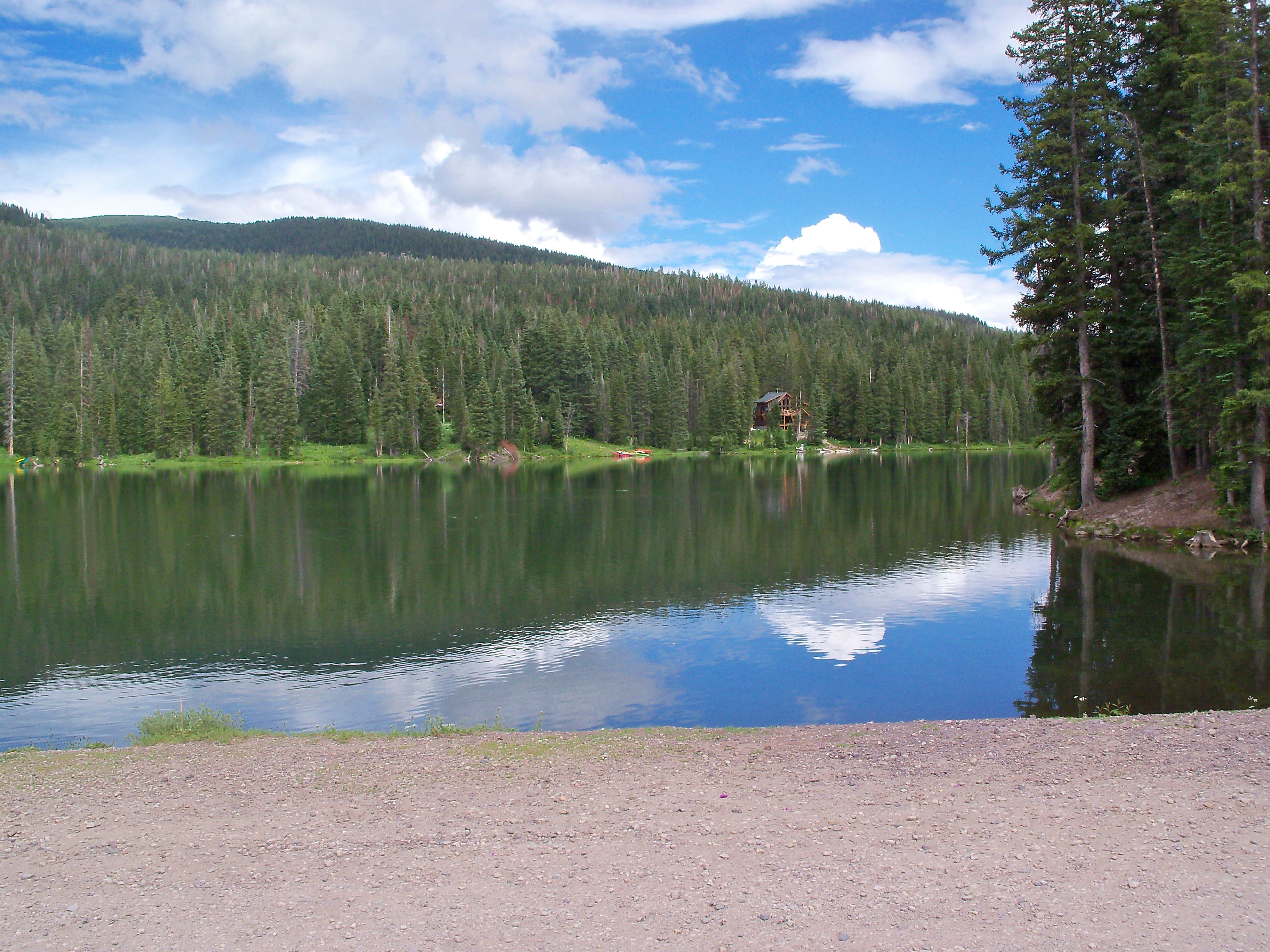 Navigation had already been difficult up to this point, but figuring out where exactly the Dyke Trail began wasn’t easy. It didn’t help that my map and my guidebook didn’t agree. And this wasn’t the only ride that I had conflicting messages coming from my navigational materials. We ended up climbing even more to the high point of our route at over 10,400 feet before we finally picked up the singletrack that was to be the focus of all of our efforts. 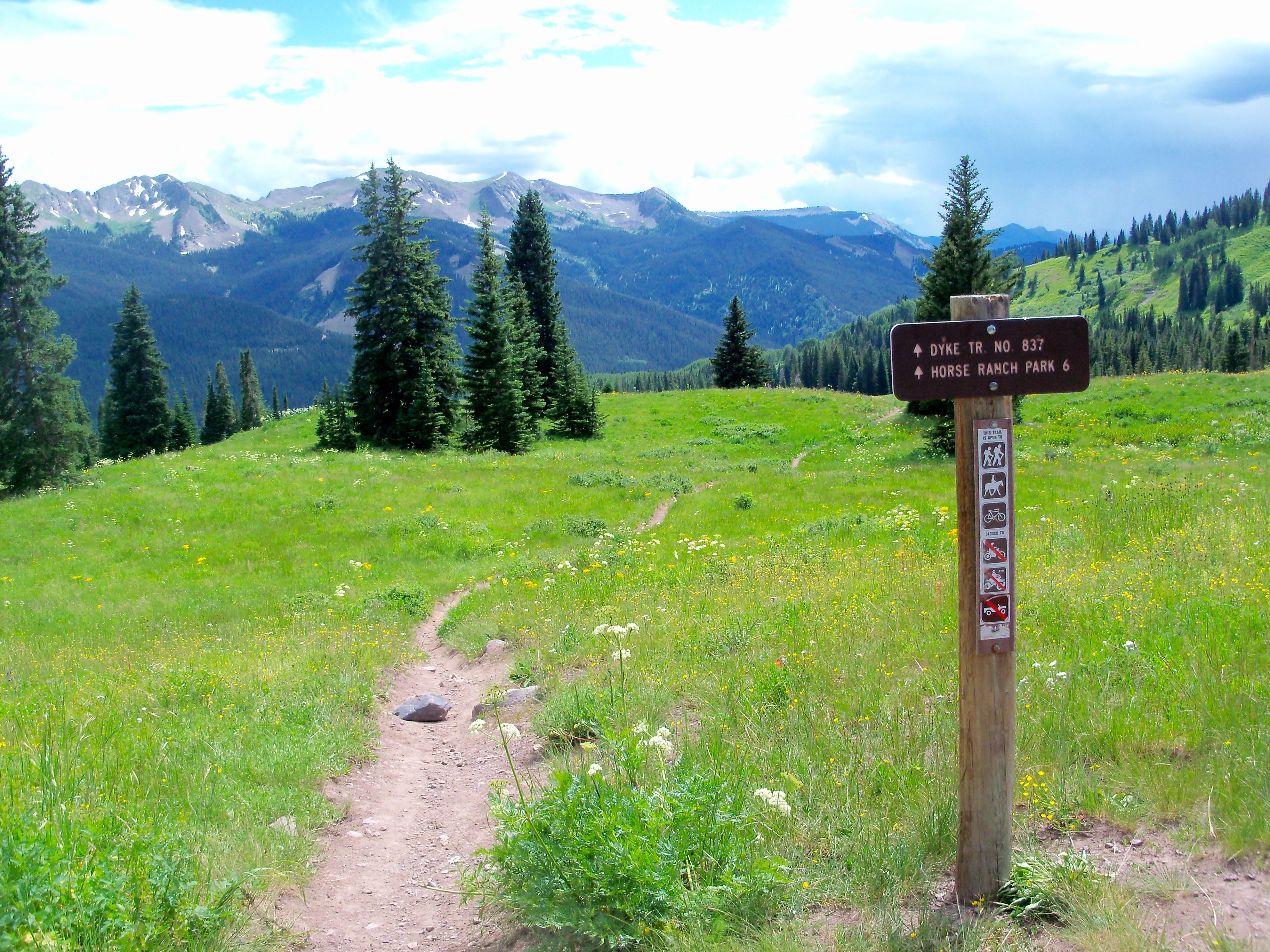 With such a gorgeous view and the singletrack disappearing in the distance somewhere down the mountain, I was stoked to let ‘er rip!

The trail busted down through the meadow, and I was surprised to find that it was fairly rough and technical. None of the obstacles were very big as I was still able to bomb through pretty quickly on my hardtail 29er, but I found myself wishing I was riding a dualie so that I could coax a little more speed out of my rig. The entirety of the Dyke trail turned out to be rather rough and more technical than most of the other trails that we eventually rode in the area. At the end of the ride, though, we realized that the trail dumps out at a popular “horse camp.” That explained all the hoof prints, fecal matter, and general trail deterioration…

When we had reached the top and were preparing to drop in to the singletrack, we thought that most of the climbing was over. Oh, how wrong we were!

The rough, initial descent through the meadow ended fairly quickly as the trail crossed a steep-sided stream and shot straight up the hill on the other side. This was the way it was going to be for the next 4-6 miles: steep, rather technical descents feeding into steep climbs with more climbing and descending to follow. The up-down-up-down, especially at this elevation, was grueling. After a couple miles of this, we resorted to hike-a-bike on most of the steep ascents. 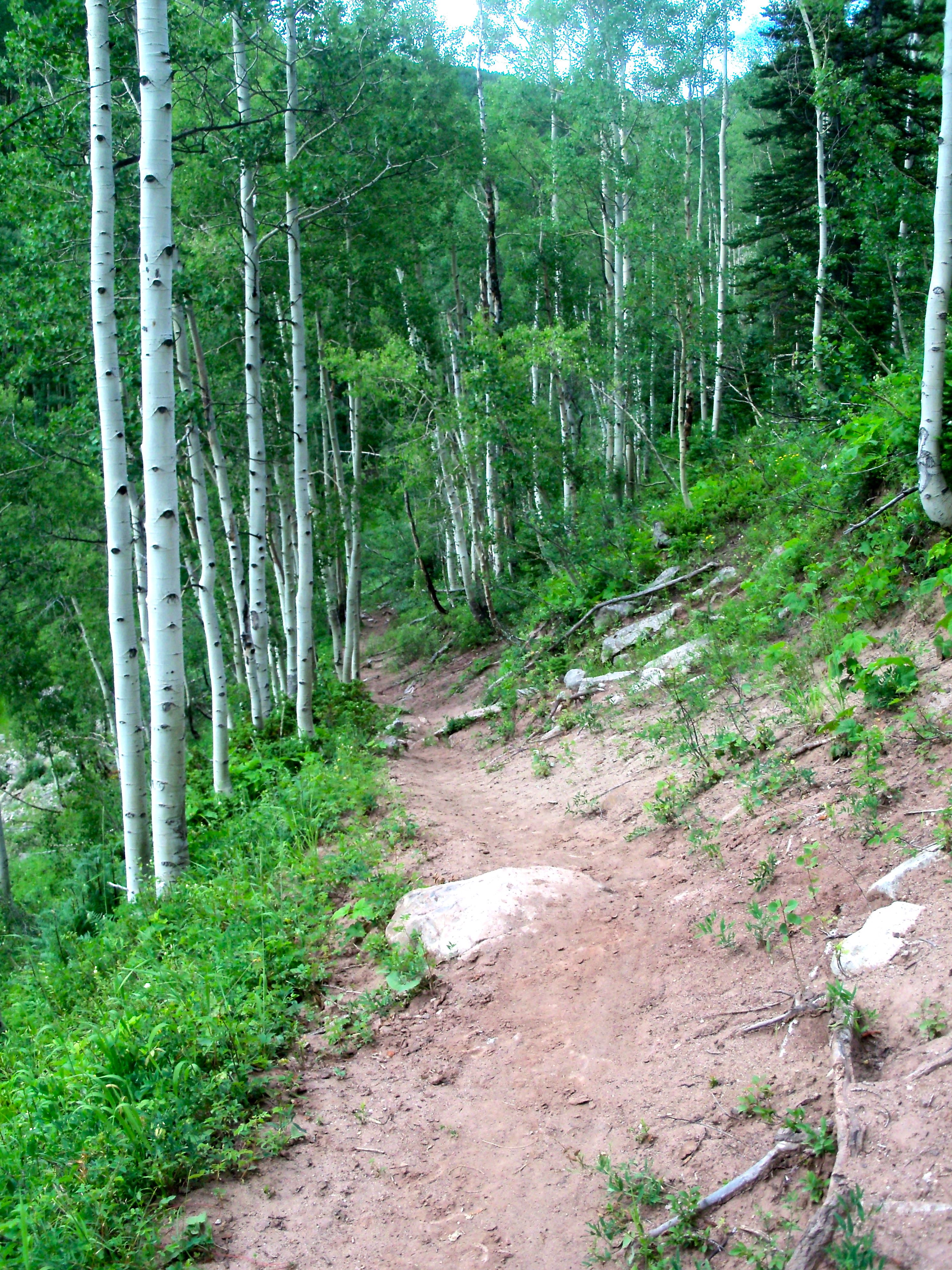 The downhills were well-worth the uphill effort, though! 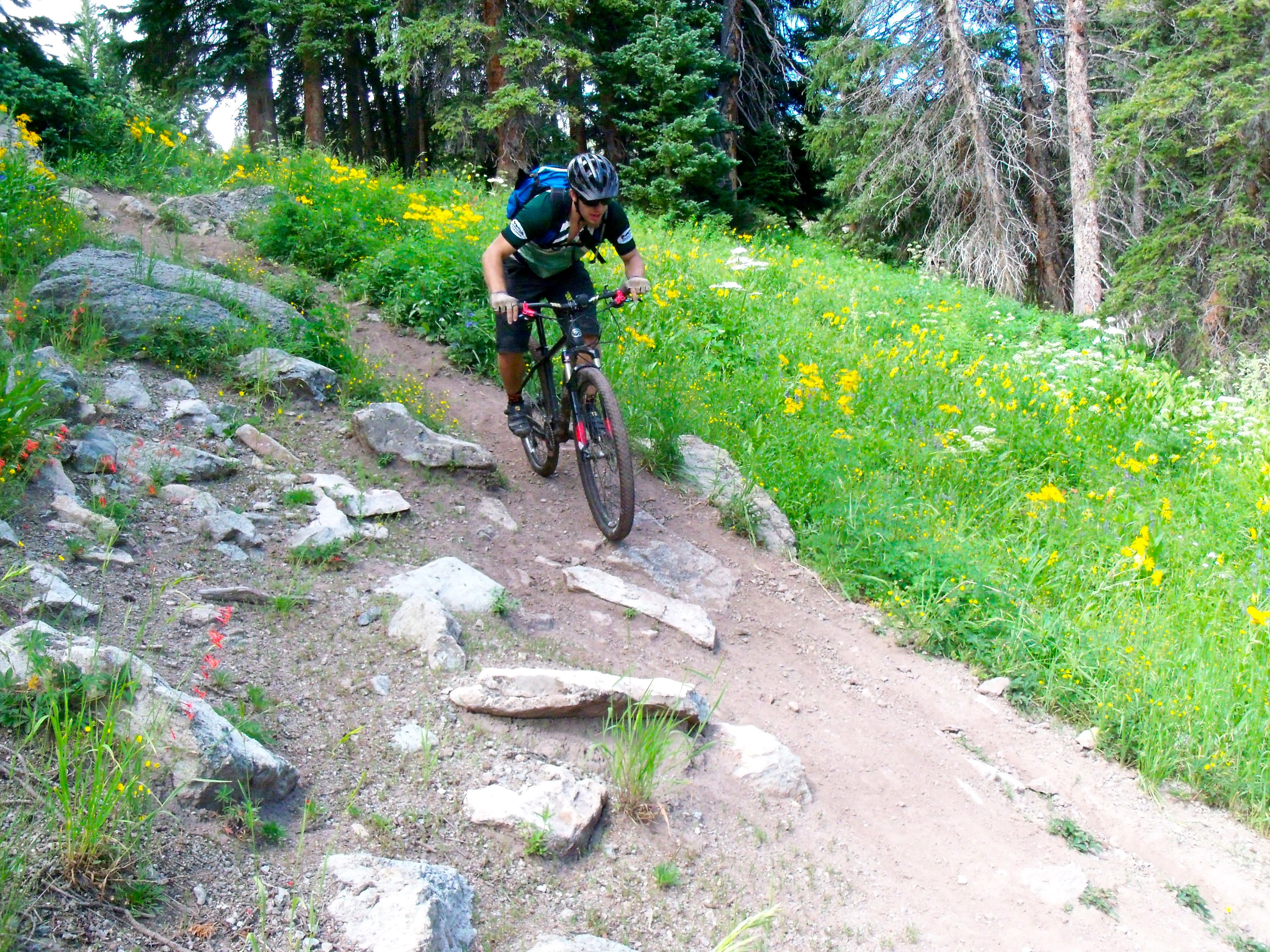 Me, on the tail end of a rocky section. Note the sweet Singletracks jersey. 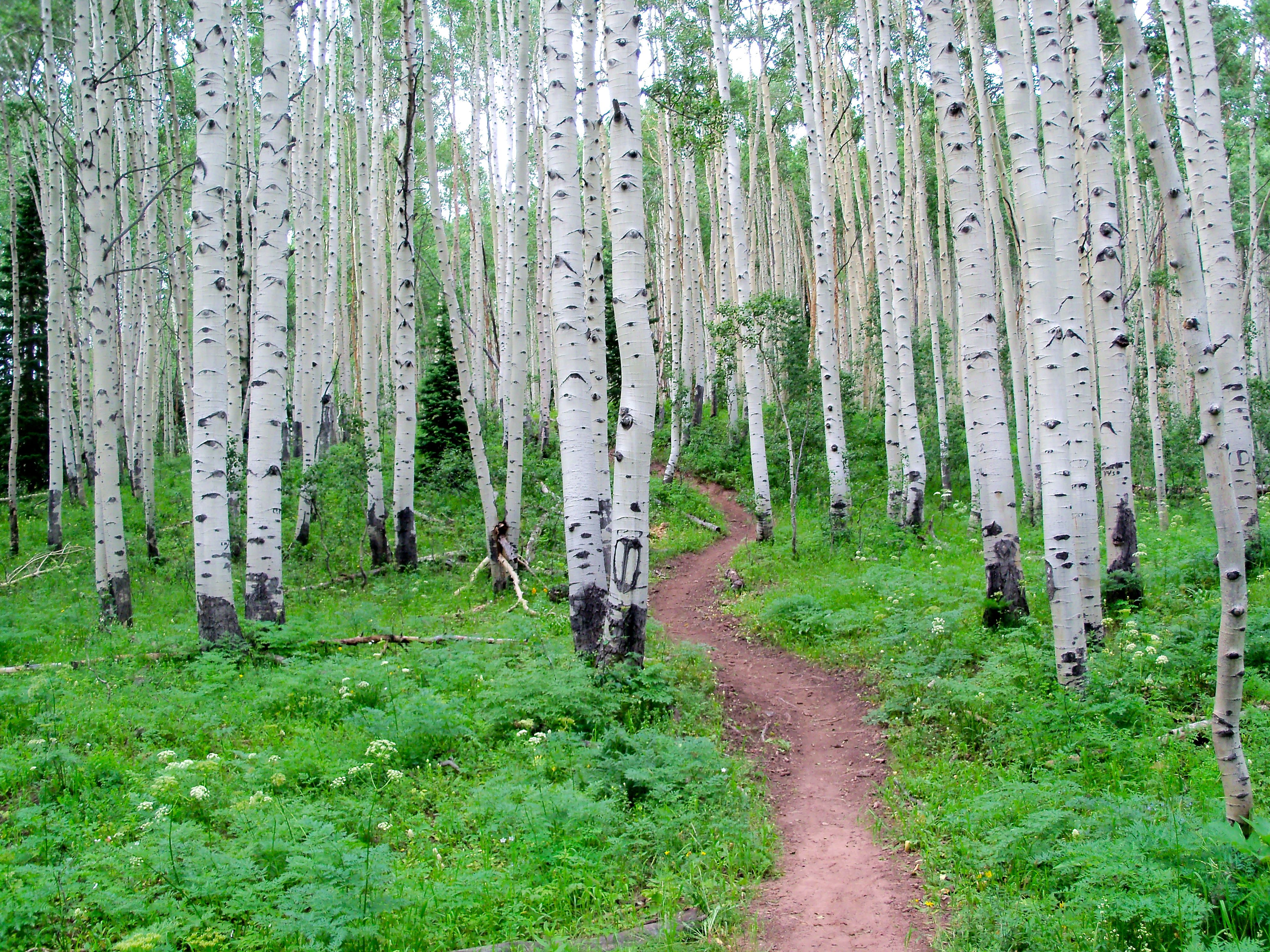 Colorado is famous for its aspen trees, and one of the largest aspen groves in the world lies outside of Crested Butte near Kebler Pass. Aspen trees grow from an interconnected root system, with each tree sharing identical genetic markers. As a result, all of the trees change colors at the exact same time. So, this grove of aspens is considered one giant organism, and as such it is one of the largest organisms in the world.

The Dyke Trail is one of the few (if not the only) bike-legal trails that runs through this massive aspen grove. It is truly an awe-inspiring experience to ride through tightly-clustered aspens that go on for miles, and to think that you are riding through one of the largest living things on the planet. This fact alone is reason enough to make the Dyke Trail a must-ride destination!

Since much of the trail is under heavy tree cover, the relatively thick vegetation (for Colorado) has created a bed of dark, tacky dirt that is just phenomenal to pedal on! 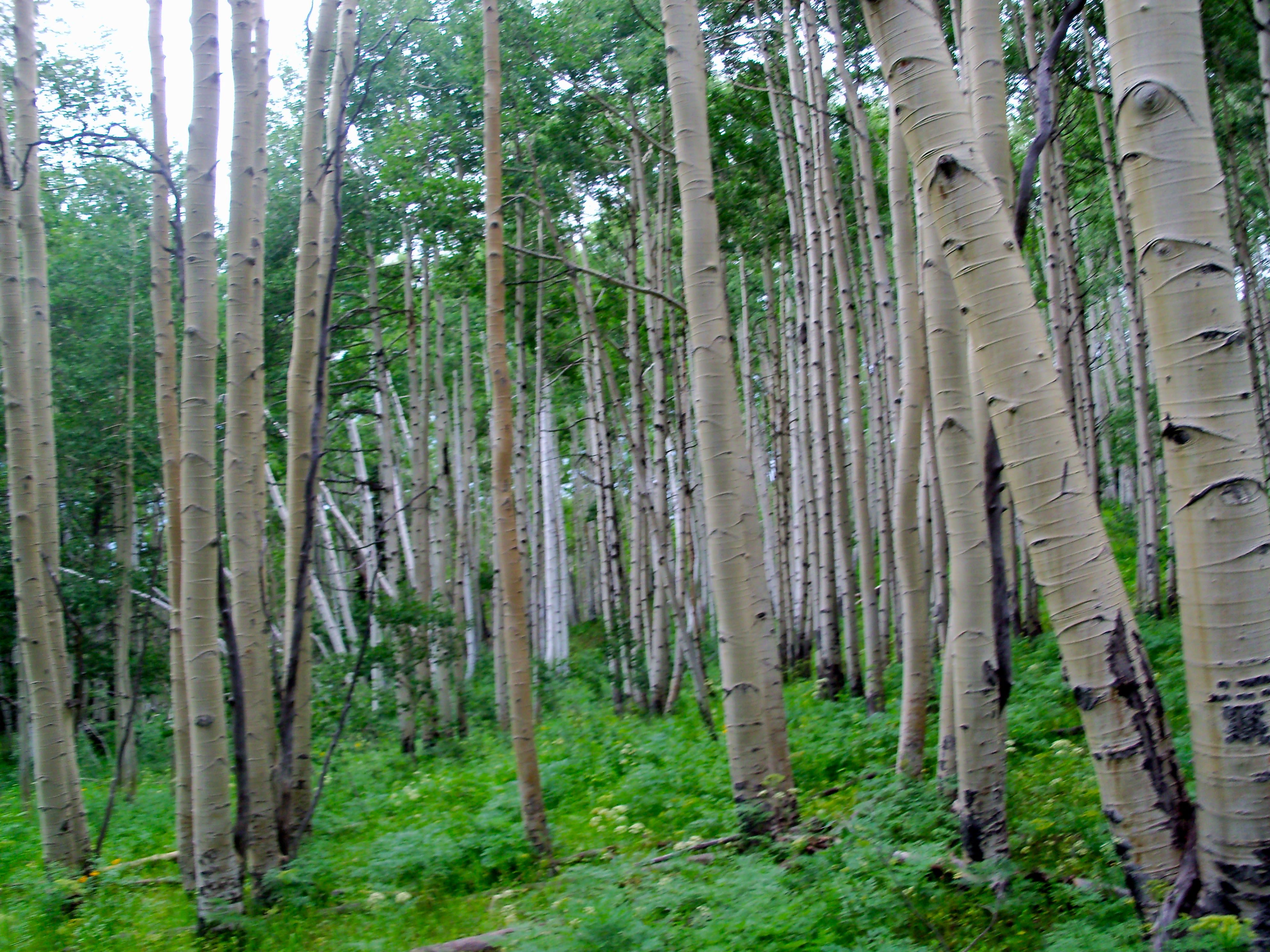 After miles of grueling hike-a-bike followed by forearm-pumping descents, we finally reached the singletrack summit of the ride. We rewarded ourselves with a much-needed breather and a little snack as we absorbed the expansive views of the Colorado Rockies. 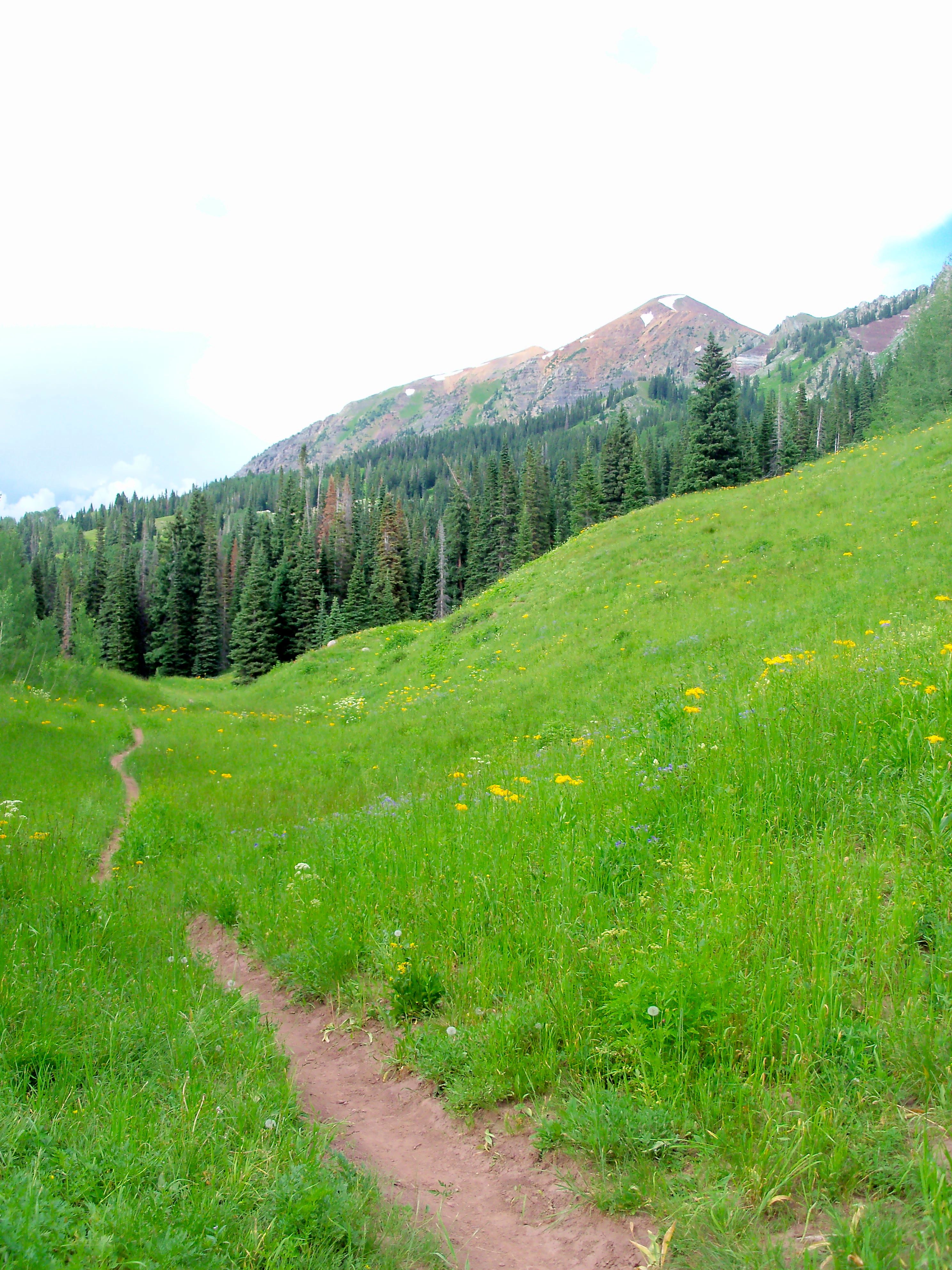 Finally, we were in for some real, uninterrupted downhill. Enough with the climbing: it was time to shred. It was time to enjoy some gravity-fueled speed. This is what I mountain bike for: and it was glorious!

The trail plummeted straight down the side of the mountain. There were no pretensions of undulating flow–this was a brake-burning race to the finish filled with plenty of rocks, washouts, drops, switchbacks, and more gnar and elevation loss than you can shake a rigid rear end at! After thoroughly pumping both my forearms and my heart to the max, it was over.

Here’s what we didn’t realize when we began this ride: we did not park at the low point of the route. After finishing with the singletrack and hitting the Kebler Pass road (much of which was paved), we knew we would have to climb a bit to the top of the pass and descend back down to the truck… we just didn’t know that this climb to the top of the pass would be the biggest climb of the ride! 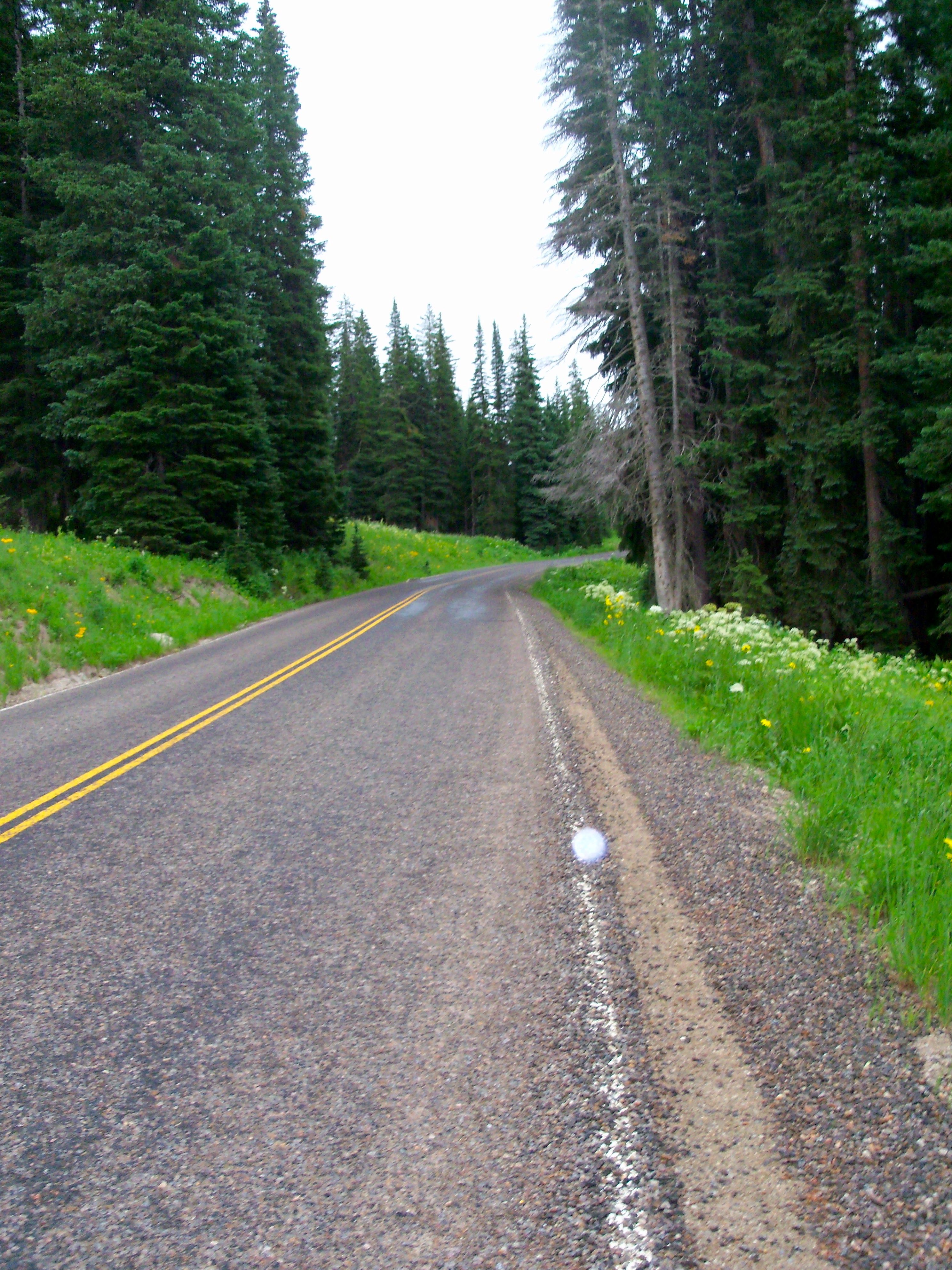 By this point, we were already thoroughly buried in the pain cave. That climb back up to the top of the pass is probably one of the top 5 most painful things I’ve done on a mountain bike this summer. And for me, being an avid mountain biker with a lot of miles in my legs, that’s saying something. For Andrew, who was only riding a mountain bike for the third time ever, this was something else entirely.

I think it is safe to say that he acquired a new appreciation of the words “pain” and “misery” on that long mountain climb. Not only was he in the pain cave, but a rock slide had covered the entrance and he was buried alive.

To make things even more fun, a couple miles up the road it started to rain. And by the time I reached the pass, it was down-right pouring.

I sat on the pass for almost half an hour waiting for Andrew to appear. Finally, I spotted him in the distance as he slowly made his way up the road. I felt truly sorry that this had to be one of his first mountain bike experiences, but I was seriously impressed with how he had persevered. By the time we finished this ride on the Dyke Trail, we had ridden almost 30 miles at over 9,000 feet of elevation that day.

Finally, we were descending down the backside of the pass, on the homestretch to our truck. But as I mentioned above, we were really surprised to only descend for about one mile before reaching the vehicle and finally getting out of the saddle.

This ride provides a true example of a brutal elevation profile:

Let me break it down for you:

It would have been much a much easier ride if we had driven over the pass and parked at the bottom of the singletrack, but it would still have been a brutal mountain biking foray. Anything with this much elevation change this quickly, and repeatedly throughout the ride, is bound to be difficult!

As we loaded the bikes onto the rack, I was glad that we had ridden that trail, but if we didn’t have to face anything that challenging the rest of the week, I’d be totally fine with it!

Great write-up and pics! The line about the pain cave and the rock slide made me LOL.

That elevation profile definitely looks brutal. It’s funny how if you just shift everything by starting at the low point things look much more reasonable. Having a big climb at the beginning rather than the end is such a psychological boost.

ahh what a fun ride! the 5 power climbs are a great test, the last decent is so fun, and the climb up Kebler is very rewarding! top 5 trails of mine!

Nice write-up! Yeah, I remember that climb over Kebler. Our bikes were so coated in mud that we stopped to wash them off in the river. My buddy literally tossed his whole bike in the water. It got clean though! It wasn’t paved at all when I did the original trail description so at least the pavement goes a little quicker. We are spending all week up there next week so maybe we will hit it again.

@trek7k, Glad you liked it!

Yeah, the profile is really brutal. Starting at a different spot would make it easier, but I think it’d still be a bear of a ride!

@neil, I felt more Pain than Reward on Kebler. Although it did feel good to reach that summit.

@bonkedagain, Thanks! I hope you guys have a great week of riding!

That is a HUGE ride for a beginner, cheers to him!

Thanks for the writeup and the pix and the elevation chart. I’m stoked to get one more trip out to Crested Butte before snow season. Might have to ditch the Moab plans to do it, though.

Moab or Crested Butte… gotta be a tough choice!

@shespoke: we’ve had two snowstorms already (above 10,000 feet) if you still want to go to CB, better call ahead.

next two weeks will be just fine! nice fall riding here in CB leaves are starting to look good! snow is melting fast!

Thanks, although I’ve biked Crested Butte once and hiked years earlier haven’t heard of this trail. As a landscaper in the past the grove sounds sweet.
To me Moab or Crested Butte is an easy choice, go where the weather is to your liking.
CB in summer, Moab in spring/autumn. AZ for winter rides.

Yeah it’s definitely worth a shot if only for the beautiful aspen grove! Like I said, it can be a tough ride though!