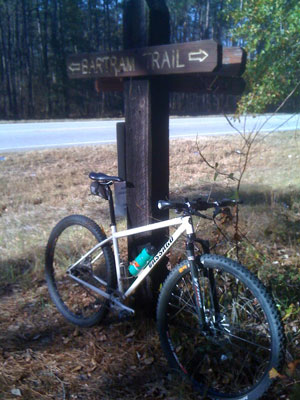 As mountain bikers we all have an arch nemesis – something that keeps beating us. It might be a steep technical climb, a man-made stunt, or a rock garden you just cant seem to clean.

My current MTB nemesis is a local route known as the Thurmond Epic. It combines the Bartram Trail, Keg Creek trail, and two trails inside Mistletoe State Park: the Rock Dam and Cliatt Creek Nature Loop. Its about 67 miles long, and 58 of those miles are singletrack. As of this writing, no one has ever ridden the entire route – even though Ive tried twice.

My first attempt was with a group of friends in June and was not a smart idea. A recent wind storm had left over 20 downed trees on Keg Creek, and temperatures that day went up into the high 90s. The heat was just too much for any of us to handle. We made it 37 miles to the Mistletoe park office before calling it a day. We all vowed to try again once the weather cooled off. 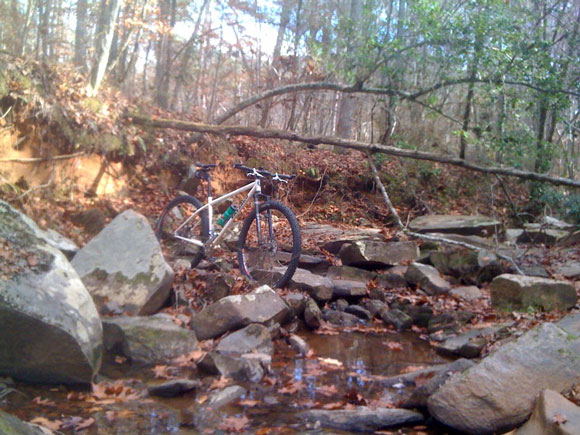 I made a second try in December and none of my usual riding buddies were able to go, so I went solo. The first 30 miles were fun and good until I was on the singletrack that leads into the back side of the Rock Dam trail where the track suddenly seemed to disappear. Its a very rarely ridden trail with pink flagging to mark the way but suddenly there was no more flagging, and the heavy leaf cover gave me no chance to see the trail on the ground. I got off the bike and walked around for nearly 20 minutes trying to find the trail, or some flagging, but had no luck. I was about to give up and turn around, but then I noticed a blue blaze on a tree on the other side of a creek. Ah ha! The Rock Dam trail has blue blazes!

I did some bushwhacking across the creek and continued on the Rock Dam trail. Everything was going well until I crashed hard and unexpectedly in an off-camber corner. I slammed my thigh into some roots and tweaked my knee a bit. I sat there for a while, then finally got up and continued on. I had to walk all the climbs, my knee was really hurting, and my single speed didnt let me gear down to spin easily. 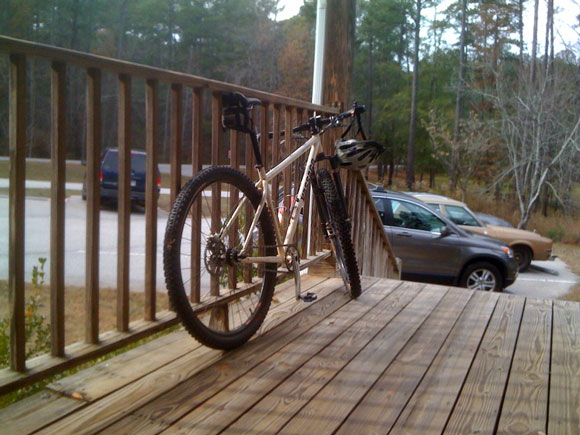 I finally made it to the park office 5 hours after starting the ride. I was done, my knee was killing me, and I still had 25+ miles of singletrack left to ride. I decided to take the road back instead. Fifteen boring (and cold) miles later I arrived back at my car, 6.5 hours after leaving that morning. I had 53 miles under my tires which is not a bad day – but I was disappointed. The Thurmond Epic had beaten me again. Im definitely not giving up and Ill be back to try it again – but next time Im bringing some friends. My latest attempt proved that it’s a long ride by yourself.

So whats been giving you trouble on the trail lately? Tell us about it in the comments section below.

I totally know what you’re saying about the Mistletoe trails – I got lost out there in November and the only way I could follow the trail was to look for those blue blazes. Some surprisingly fun stuff out there (though with a lot of boring stuff in between).

I’m trying to wrap my head around how you get 58 miles of singletrack out of the route. Is it an out-and-back? How do you get between Keg Creek and Mistletoe SP?

Hopefully things will dry out over the next few days so I can ride Keg Creek this weekend. It’s the last of the Augusta trails I haven’t ridden and the last time I was there was about 15 years ago when I did some trail work as part of my buddy’s Eagle Scout project. Is there some kind of patch for riding all the trails in the area? 🙂

It is an out and back. You use a 4-wheeler path to get out of Keg an onto paved roads, and ride them to the back entrance of Mistletoe State Park. Starting at West Dam Rec. Area and heading west the entire route looks like this.

It’s a big ride! Almost zero climbing, but you never ever get a break either, you’re pedaling the whole time. Looking forward to trying it again in the spring!!

Man I know exactly what you mean. I live in the DFW area of Texas and have roughly 30 trails around here BUT only one seems to kick my butt every time, North Shore. I don’t know what it is about this trail. it offers much more technical trail riding but that’s not what gets me. For some reason every time I go there I end up hitting a tree, going over the handle bars, stalling on the top of an uphill and crashing my way back down. The funny thing is a keep going back. My friends always want to ride with me on this trail just to see what happens to me, it that sad. Its a good trail but WE are enemies till we work something out

I have a few features on trails that just drive me nuts…I have a step down that I attempted in the beginning of the year and fell short of landing it by a good foot. Resulting a massive crash..Tore a few “delicate” parts on my body….As a result every time I come to that I walk…Even knowing that I can do it..I have to get over that mental block. I also have that same block on a few double jumps that are on a few trails…Also a result of that crash..

I say we all travel to the Thurmond Epic and make a concerted effort to conquer it!

maddslacker, that would be an EPIC ride. you make it sounds like where a bunch of gun slingin loan ranger’s on mountain bikers lol. Truly epic

If there is ever a ride that could be described with the words “pedal, pedal”, this is it.

I’ll take a shot at it sometime as it is local to me.

[…] Dustin has been active on singletracks for a while now and we love the single speed perspective he brings to the team. Living in the Augusta area, Dustin has access to hundreds of miles of singletrack and the IMBA Epic FATS trail system which sorta makes us jealous. In addition to competing in races like the Snake Creek Gap Time Trial and the Fools Gold 50, Dustin is active in SORBA and helps organize local MTB races. Check out his recent article titled “My Arch Nemesis: The Ellusive Thurmond Epic.” […]

[…] long, with a lot of climbing for this area.  Mistletoe is the western most portion of the big Thurmond Epic […]

3rd time is the charm! Finally rode the whole route, took a little over 7hrs including all stops and putting up some route flagging. 64.8miles.

Well, I know you’ve completed it because in the 2014 Best Dam Ride a lot of riders did. 🙂 I may be back again this year with my fat bike. It’s a great day in the woods.