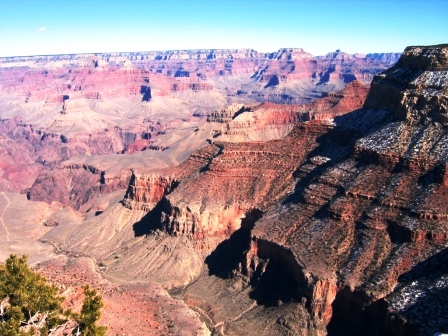 If you haven’t heard, there are some guys that are attempting to ride their mountain bikes from Alaska to the tip of South America and according to the blog they’re down in Arizona taking a break as we speak. Calling this an epic ride is a a bit of an understatement and they’ve certainly had their share of adventure thus far.

Recently the guys took a little detour into the Grand Canyon on their bikes which, if you’re not familiar with the park, is kinda against the rules (said another way, illegal). After posting the Grand Canyon adventures on their blog the crew was greeted at the 24 Hours in Old Pueblo race in Tuscon by federal agents who (politely) took them into custody.

Anyway, I won’t try to recount their story here, just go to the blog and read the full story of intrigue, subterfuge, and hilarity. Also check out their “punishment” post which replaces the original Grand Canyon post.

I definitely recommend keeping up with this blog, who knows what awaits the crew in Central America!

[…] If you’ve been following this blog you know that it is indeed possible to be arrested and charged with a federal crime for riding your mountain bike in certain locations. Witness the Riding the Spine crew and their foolish trip into the Grand Canyon on their bikes. If a trailhead specifically says it’s closed to bikes or if you see a little symbol of a bike inside a red circle and a slash across it, that means you shouldn’t ride your bike there. This is especially true for designated wilderness areas where only foot traffic is allowed. There was some discussion on this site last year about whether or not it was ok to carry a bike on a trail through a wilderness area but these days land managers are making things very explicit – no bikes allowed, ridden or carried. Don’t expect to get off on a technicality – just avoid these areas when you have your bike. […]