When we rolled into South Lake Tahoe, I was totally unprepared and had no idea what to expect. Tahoe hadnt originally been on my to-do list, but thanks to Jeffs recommendation and the availability of additional time to spend, we decided to stop in and see what the area had to offer. At first we were planning on heading over to Tahoe City, but after doing some looking around for hotels I settled on South Lake Tahoe (SLT) because there were many more options, cheaper rates, and because I had heard of SLT being the epicenter for downhill skiing in the region. 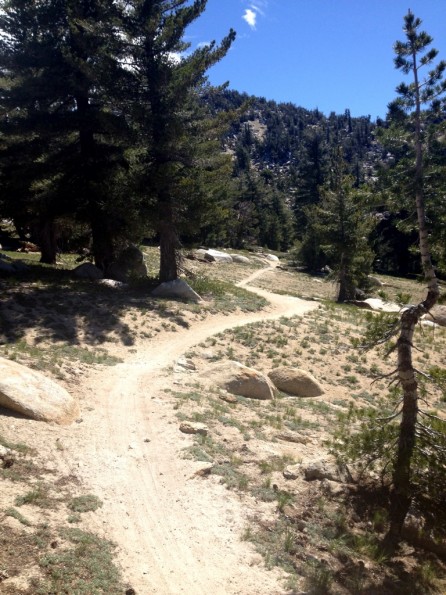 After enjoying a beautiful drive beside the lake to get to SLT, we checked into the hotel and I started doing some research. I had heard about the Tahoe Rim Trail (TRT) that supposedly encircled the entire lake, but how exactly do you go about riding one section of a massive 165-mile loop, of which only 80 or so miles are open to mountain bikes? Looking at some of the maps in the singletracks database, I was a little overwhelmed with the number of options available.

So I did what any rational person would do: I got on Facebook and asked for advice. Thanks to some generous help from a bunch of our Facebook fans, especially AK_Dan, I settled on hopping a shuttle from Spooner Lake to the top of the Tahoe Meadows section of the Tahoe Rim Trail, riding that down to the Flume Trail, and then winding up back at the Spooner Lake parking lot.

Turns out I should have just had my wife drop me off when we started our drive down to the lake, as the shuttle ended up dropping me off right below the top of the pass near Mt. Rose. Still, $20 for a shuttle ride is a pretty fair price, but where youll really get bit is the $10 it costs to park at Spooner Lake. Adding it all together its $30 for a mountain bike ride, which seems a little steepbut Im so glad I did it!

The Tahoe Meadows section of the TRT is excellent singletrack that winds its way along the ridge above the lake. Mostly made up of a smooth sandy/gravelly tread, there are a number of rocks thrown into the mix to keep you on your toes and provide a little bit of entertainment value as you ride. 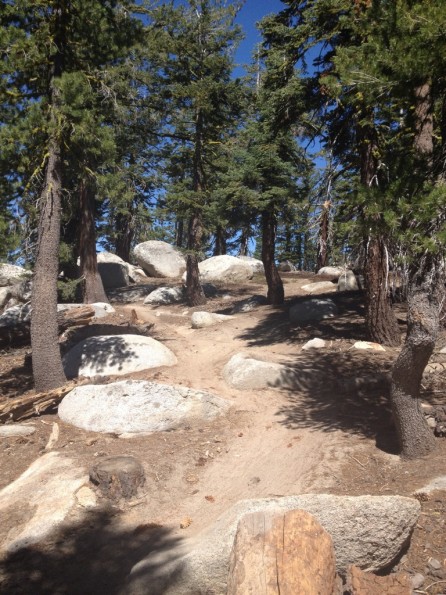 A few rocks on the TRT.

As I traversed the ridge, the views of the lake were already gorgeous, but they were only going to get better!

Down at the turn off to the Flume Trail it was decision time. I had met several guys on the shuttle and along the trail that were going to add in an extra segment of the TRT and ride out and back on the Flume before heading back down to Spooner Lake.

At first I wasnt going to add in the extra section of trail, but the original shuttle run was only going to be about 18 miles long and I had paid thirty dollars, dangit! I decided to join the others and add in some more of the TRT, which also included a stiff 1,500 foot climb.

I had been off the bike for the past couple of days as we drove across Utah and Nevada, so I was sitting on pretty fresh legs and was just hankering to knock out a steep little climb. The singletrack climbed consistently up from the junction, but it was a pleasant climb all around. Eventually, it topped out above treeline, offering up some amazing views of Marlette Lake with Lake Tahoe in the background: 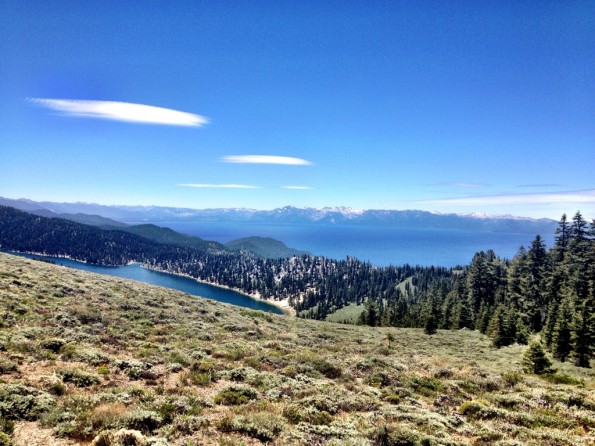 From there it was downhill time! At the junction with the gravel road, the TRT continues straight, but it merges with the Pacific Crest Trail and is off limits to bikes, so down the gravel road I went. At the bottom, I circled around Marlette Lake and picked up the Flume Trail. 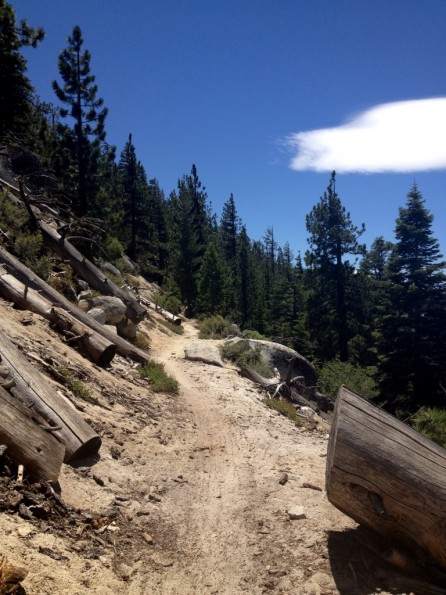 The Flume Trail came highly recommended from basically everyone that commented on the Facebook page, so I just had to ride it. Some reviewers on Singletracks have claimed that it is just non-technical doubletrack with good viewsnot true. The views, it is true, are amazing, and are some of the best that Ive ever experienced from the saddle of my mountain bike! However, Flume Trail proper is actual, legitimate singletrack that is pretty narrow and very exposed in places. 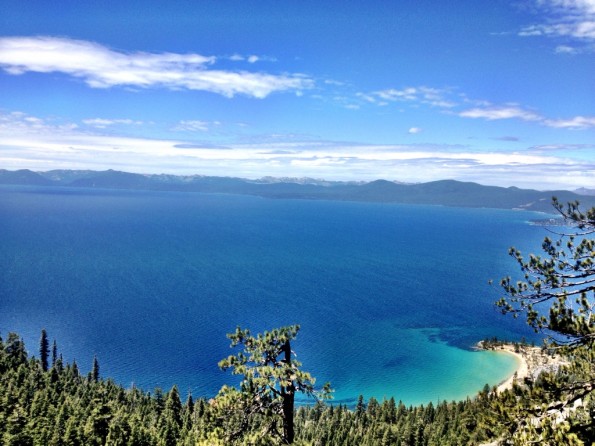 One of the many views of Lake Tahoe from the Flume Trail.

The Flume Trail was originally the site of a wooden water flume that carried water down from the man-made Marlette Lake to the booming mining towns below, allowing the miners to extract over $20 million in gold. The Flume operated into the early 1900’s and then fell into disrepair. In the 1980’s, Max Jones, a professional mountain biker at the time and currently a mountain bike hall of fame inductee and two-time US Veteran National Champion, asked permission to transform the old flume into a mountain bike trail. 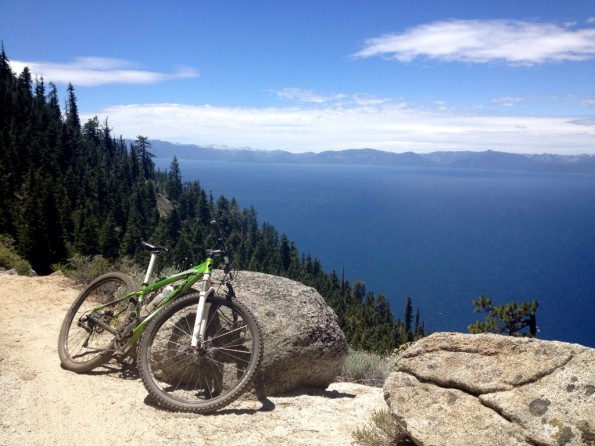 Airborne Goblin high above Lake Tahoe. A hardtail 29er was the perfect bike for this mostly smooth ride.

After riding the Flume all the way back to the junction, I turned around and headed back towards Marlette Lake. I dont think I could have fully appreciated the trail and the views if I had only gotten to ride it one wayout and back was definitely the way to go! 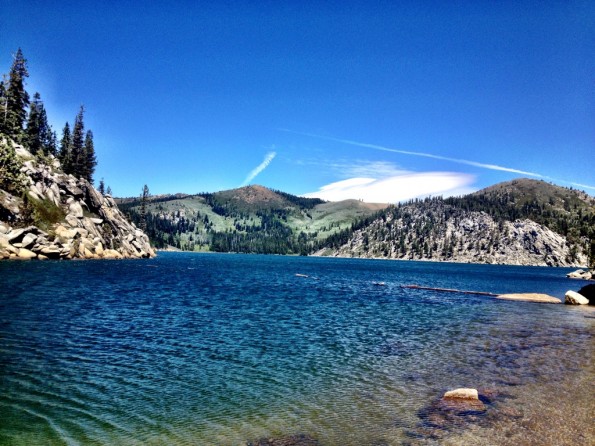 View of Marlette Lake from water level (you actually have to ride through the shallows at one point). While it might look like a good place for a swim, on this day the temps were in the low 60’s and the ripples on the lake were from the wind that was blasting up the mountains off of Lake Tahoe. For June, it was a cold ride!

Back at Marlette Lake, I was a little dismayed to discover that I had a steep gravel road climb up from the lake to a saddle before I began the final descent back to Spooner Lake. Quickly closing on 30 miles for the day, I soldiered on.

At the top of the saddle, the gravel road turns downhill and drops quickly back down to Spooner Laketoo quickly, it was all over so fast! While all in all it had been an awesome day in the saddle, the day would have been so much better if the last several thousand feet of descending–actually where the majority of the elevation loss from the shuttle ride took place–was on a singletrack trail instead of an awkward forest road with a posted mountain bike speed limit. Whos going to go 15 miles an hour, really? 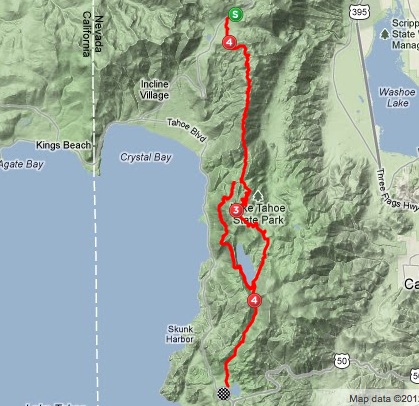 Map of my route. Note the backtrack north from the south end of Marlette Lake to ride the Flume Trail out-and-back.

At the end of the day, I had clocked 33 miles and almost 3,000 feet of climbing despite the shuttle ride, and I loved (almost) every minute of it! With 80 miles of the TRT open to mountain bikes and many more singletrack trails connecting to it, there is so much more riding in the Tahoe area that I did not get to experience. I cant wait to return and ride the rest of it!

Your Turn: Have you ever ridden near Lake Tahoe?

Mountain Bike Podcast
Fabio Wibmer Talks Confidence, Perfection, and Inspiration [Podcast #272]
Trails
How to Find the Best Places to Snow Bike
Trails
The 3 Best MTB Road Trips to Take in the...
Trails
The Caldor Fire is Near Containment, but Many of Tahoe's...

Community
Kate Leeming on Exploring the Planet by Mountain Bike
Gear
These Bikes are Lightweight, Affordable, and Made for HS Mountain...
Gear
Our Most Popular MTB Product Reviews of the Year
Gear
The Marin El Roy Hardtail is Very Slack, But it's...
Subscribe
Login
Please login to comment
14 Comments
Most Voted
Newest Oldest
Inline Feedbacks
View all comments

I rode a (very small) section of the TRT a couple years ago that connected up with the trails at Northstar. It’s so cool that you can ride a lift up, shred backcountry singletrack, then bomb back down to your hotel with a pool. Great place to ride!

Beautiful. I lived there a long time ago(’75). Rode Road bike everywhere. Hiked, backpacked…kind of forgot how amazing the Lake is from the Rim. Great shots and story.

Wow, the views are unreal. Being able to ride the bike there is an absolute bonus.

Sad to say, but it seems like most trails with views this good are closed to bikes, so this is truly a rare treat!!

The Flume Trail is on the top of my bucket list

RoadWarrior, when you do it, definitely add in the TRT. The TRT is where the fun riding really is, and the Flume, while it’s pretty fun, is really all about the views.

Do you have the elevation profile handy? For a shuttle run with 3k feet of climbing I bet it’s pretty unique!

You’re right, it is pretty interesting. Started off at almost 9,000 feet, ended at 7,000, but some pretty stiff climbs (you can easily see that big one I was talking about) thrown in.

Wow, that is one long sustained climb.

So excited that this is on our road trip list for later this summer!

@mtbikerchick, I hope you guys have fun!

Definitely adding this to my list, but it’s probably going to be a year or two.