If you ever decide to travel to the mountain bike destination of Bend, Oregon, chances are someone will mention the name “Cog Wild.” 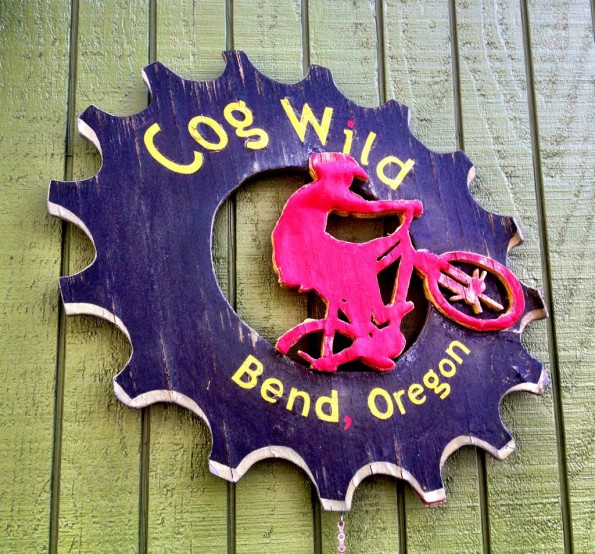 Cog Wild is the premiere mountain bike guide company based in Bend, and it was founded in 1999 by Woody Starr. Though, the actual permits used by the company date back 15 years even earlier. Passed down from person to person, they eventually became the property of Cog Wild.

In 2006, Melanie Fisher and Lev Stryker purchased the company from Woody (who is still heavily involved in the local mountain bike scene as the chairman of the Central Oregon Trail Alliance (COTA)), and then sought to turn it into a major business.

Their first guide was Erica (who still works with the company and is a straight-up badass), but they have expanded to a current size of 25 guides with several administrative and office personnel as well.

While this small Bend-based company may have had humble beginnings, the Cog Wild name has traveled far and wide across North America, and whenever anyone who’s been on one of their tours talks about the experience, their eyes tend to roll back into their head. Originally just a regional tour company, Cog Wild’s influence and renown has expanded so that they can offer trips across the entire state of Oregon and beyond, ranging from half-day shuttles to multi-day vacations. Destinations include, but are not limited to:

Now in its third year, the company also  offers an international winter getaway mountain bike vacation in the Baja Peninsula of Mexico.

Eddie O’Dea connected me with Cog Wild co-owner Melanie Fisher before I hit the road to Oregon. Mel thought that one of their half-day tours would be a great introduction to the local singletrack, and would help me get the lay of the land. 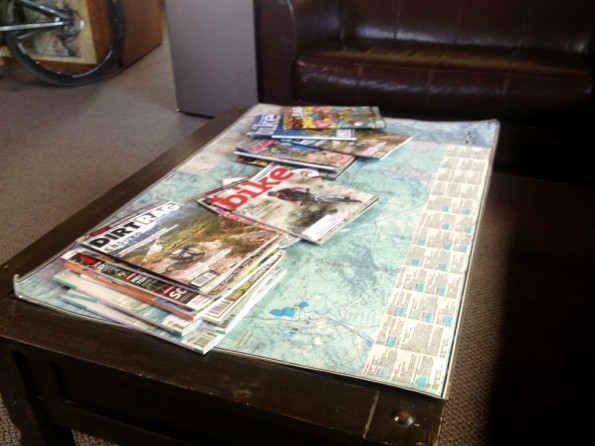 The first thing that hit me when I arrived at Cog Wild early on Wednesday morning were how many bikes and bikers were buzzing around. Despite the fact it was before 9 am on a weekday, the parking lot was swarming with two-wheeled fiends as hydration packs were checked, chains lubed, and shuttle vans loaded with bikes and singletrack-starved visitors. 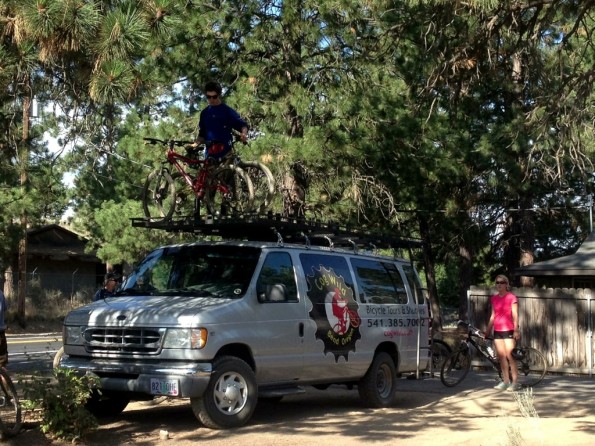 A few full-day tours went out before us, and then it was time for the half-day tours. It turned out that there were two half-day tours going out, and since there was a great difference in ability levels, they decided to divide up based on ability and experience. After all was said and done, my tour consisted of myself, an older lady who just might have been the most legit woman my mom’s age or older that I’ve ever met, and our guide. This lady is pushing 50 but is an accomplished technical mountaineer, ultra endurance runner, and mountain biker to boot. On the other end of the age spectrum was our guide, Austin. Soon to be a sophomore in college, this 19-year-old is the newest and youngest guide employed at Cog Wild.

Our tour began with a shuttle ride up to the Tiddlywinks/Funner trailhead. After a short safety talk, we were off, rolling down the Tiddlywinks trail.

As soon as we dove into the trail, we got a good taste of classic Bend singletrack. The stereotypical trail tread is narrow, dry, and very dusty. The dust is so fine that the locals refer to it as “moondust.” The soil here is actually quite young in comparison to most, since it consists of volcanic ash spewed out of a nearby volcano some 7,000 years ago (compare to other dirt that scientists put at millions of years in age).

After a short, very gradual climb, we started to descend, and we would enjoy a rolling descend for most of the morning. While Tiddlywinks was relatively easy, there were a few optional obstacles to play on: 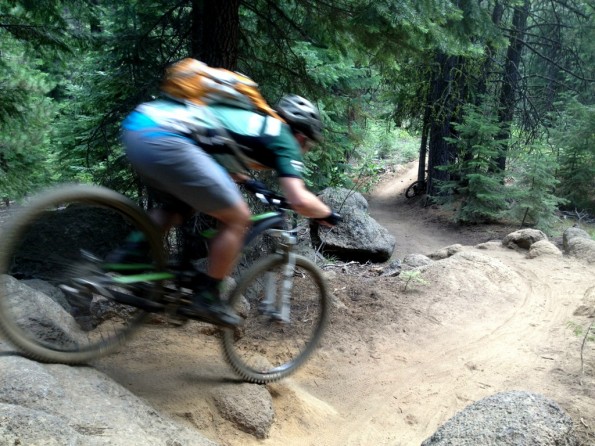 Towards the bottom of Tiddlywinks we hit the most entertaining stretch of trail all day: a half-mile flow-style descent, chock full of massive berms, table tops, doubles, and other air-providing features. This section of flow trail was absolutely superb, and completely unexpected! It’s not labeled on any of the maps (aside from being a part of the Tiddlywinks Trail), and there would have been no way for us to know ahead of time about this delicious piece of singletrack pie had it not been for our guide’s local knowledge. But I guess the secret’s out now: ride Tiddlywinks!

At the end of Tiddlywinks we hooked up with Storm King, and then headed down to the Deschutes River for lunch. Unbeknownst to the willing sheep, our fearless shepherd had packed some snacks for us, including cheese, crackers, and watermelon. What an awesome surprise!

From Storm King, we headed back up from the river and picked up the C.O.D. trail in the Phil’s Trail System. Phil’s is the go-to trail system in Bend, and is home to some 50+ miles of trails. Even the trails that aren’t considered to be part of the Phil’s Area still connect to it, as I discovered on this ride. Stay tuned for more on Phil’s in a later blog post.

We rolled through Phil’s and dumped out onto a bike path. We followed the bike path for about two miles, which deposited us right back at Cog Wild. It felt like a very easy morning ride (thanks to the shuttle), but we still ended up logging about 23 miles and 2:20 moving time.

Despite being the youngest and newest guide at Cog Wild, Austin’s demeanor was still incredibly professional. He was exceedingly prepared, with intimate knowledge of the trails, stellar bike handling skills, first aid kit and training, and delicious food for a mid-ride snack.

But perhaps the best part of the tour was rolling into the parking lot after a long, dusty ride, heading upstairs to Cog Wild HQ, and getting to choose a cold brew from the stocked refrigerator, courtesy of the local Deschutes River Brewery. Ahh, refreshing!

Cost for a half-day tour is $60 for those over the age of 13. That price includes:

That price does not include:

Pret-ty cool. The trail looks very beginner friendly too, except for those last techy bits. That looks like a perfect day of riding.

Yeah, the trails close to Bend, on average, are pretty beginner-friendly. There are a few techy sections sprinkled throughout, but those are easily walked if one is not up to the task.

Timely article as a group of 5 just finished the 3 day Bike and Brew Tour. I lost track of all the names of the trails we hit but the terrain varied and the trails were perfect single track. Some pretty stiff climbs thrown in for good measure. Our guides, Russ and Jason, have to be at the top of CW’s rotation list because they were the best and super cool to top it off. Melanie does an outstanding job with all the administration. Oh, and the Brew part (includes tasting and touring several breweries), multiple thumbs up. Hanging out at the Clubhouse downing the local offerings was an extra treat. We will return.

I think I’m going to do a whole article on what Bend, as a town, has to offer. And the 12 or so breweries are a big part of that 🙂

Hi, we had a great ride with Cog Wild about 3 weeks ago. (The visit was part of a 7 week mtb tour of the western states.) We started at Tumalo Falls, had a scenic ride up the river, then a fabulous ride back to base down Mrazek. We wouldn’t have known to do this without Cog Wild and our guide was excellent.

So, let me get this straight in my mind. Your job consists of riding trails that the rest of us dream about, put your experience on “paper” and call it a day?! Where did I go wrong? If I weren’t retired I would be gunning for your position and there would be no place to hide!

Guess I need to add this to my already impossible bucket list. Keep ’em
coming Greg. If you are ever in the Southern California area (I’m in the N. county of San Diego) be sure to check out the brand new Skyline trail in Big Bear Lake (about 2 1/2 hours north of me) Absolutely beautiful. Reminiscent of Easter Sierra trails.

Beware though…keep looking back for that retired Uber blond on the Scott bike…if you value your job that is! Have a great one!

Haha, well that’s definitely apart of my job… I spend most of the time just sitting in front of the computer, but I DO get to ride some cool trails! 😀

As for big bear, I was just there last summer. Now I definitely want to get back to the area and check out the new trails!