“So the thing about riding Mammoth is…”

Somehow I knew Gabe Taylor, head of bike park operations at Mammoth Mountain, would comment on the elevation. Was it my gasping and sputtering that made him offer this nicely-packaged, handy excuse for me? The one I was just about to deploy? I don’t know, but I was thankful.

“Yeah. What’s the elevation where you live?”

A former pro snowboarder, Taylor was just one more person who had come to Mammoth to ride, and never left. Knowing that professional athletics don’t last forever, he’d welcomed the opportunity to manage the increasingly-popular bike park at the resort. Clearly proud of the trails on offer, Taylor eased us up the mountain on Beach Cruiser, a gentle, flowy pumice-based noodling ascent that saw only one group coming down, despite the beautiful weekend and the legendary Kamikaze Bike Games taking place just over the hump from us.

From the top, the view of Banner, Ritter and the Minarets was a little shock of delight. I’d backpacked in the Minarets many moons ago, and the sight of their inverted chalky fangs biting the sky pulled me back through time. Their remoteness–their staunch unreachableness–reminded me briefly of H.P. Lovecraft’s At the Mountains of Madness, a sci-fi/horror novella involving an Antarctic expedition, freakishly-tall mountains, and, well, giant squid (it’s better than it sounds!).

Anyway, back in present time, we traversed the Kamikaze downhill that had run the day before, where Leigh Donnovan and Todd Snider—both “Legends” at 45 and 40 years old respectively, won their races. Contemplating speeds up to 60mph on this white marbly surface made my stomach wobble and threw me a little off balance. While standing. I was surprised that the young bucks and does weren’t winning this one, but locals familiar with the race assured me that the Legends usually win. Yes, youth brings gusto, bravado and keener eyesight, but the muscle memory of barreling down a gravel-laced chute named for Japanese fighter pilots gives a bevy of bonus points to experience. And not that I’m gonna go do it anytime soon, but it gives me heart as my own years accumulate. “Old is ten years hence” is my new favorite saying, and if you can still win the Kamikaze downhill at 45, then I say bring it on.

The long, sustained swoop down Off The Top and Brake Through was all those things we say about the simple joy of mountain biking—like an amusement park ride, flying through the forest, the speed racer scene from Return of the Jedi. (Do people say that? Not sure. They should. It’s perfect.) High mountain lakes with sandy soft shores invited a swim.

For now, we pedaled back to the main lodge on Uptown Trail, one that is uphill only and parallels its aptly-named sister, Downtown, a downhill-only swisher that saw several families and newbies adjusting to brakes, shifters, and knobbies. In fact, Taylor says families are the bike park’s fastest-growing sector, and one that they intend to embrace. Lest that give the wrong impression, twenty feet later we stopped to watch downhillers dressed like football players huck their mounts over a massive gap jump, the outline of wooden structures peeking through the trees, like miniature train trestles.

Mammoth will be renovating facilities and expanding trails and ski runs soon. While one could argue that it’s time—the main lodge and ski area (one of them—there are four spread out across the 3,500-acre resort) do have a 1970’s feel to them—one also hopes that a Vail-ification is not in the offing. The “new” village at the bottom of the hill, built in the early 2000s, is apparently still a topic of ire amongst the locals. It’s nice, but it is a copy and paste job, the same you’ll see at Northstar, Squaw, etc.

After our 24-mile loop around the mountain, we roped our guide in for a beer and a snack at the Yodler. He ordered a pretzel, and my partner jumped in “Two please…” Taylor’s eyes bugged out and his head shook “no,” while making vague choking sounds.

“No, you don’t understand. One is more than enough.” The thing was the size of a German Shepherd. And maybe that is not the most appetizing or appropriate comparison because it was really good, but I need you to understand—this thing was huge. And for $18, it had better be big.

At several points during our ride, we’d all commented on the clarity of the skies, the crisp views. An hour later on the Kamikaze side of the mountain, we watched Enduro racers plummet down a harrowing vertical funnel of powder with pointy things in the way, all in pursuit of glory (or perhaps just the lack of a ruptured skeleton). Rather suddenly, a red-tinted mushroom cloud materialized to the east and set an eerie background to those dropping into the chute. While in the end the fire did not threaten the community of Mammoth Lakes or the resort, smoke and ash settled far and wide, coating cars and tickling lungs, setting off deep-rooted, DNA-level alarms. Fire and earthquake—nothing is better for a quick smackdown on human hubris. In the face of such forces, trivial woes and concerns are made appropriately small.

The next day we rode a few miles out of town at Rock Creek, a quiet waterway hung like a ribbon on the neck of the high desert—a meandering green oasis set in a tumult of broken stone. Massive ponderosa pines defined the creek’s corridor and stood firm against the geological onslaught. Mountain peaks appeared through the “V” in the canyon, smudged with smoke, like a fine charcoal drawing whose artist dragged a palm across his work in frustration. The trail flowed like the creek we followed–swoosh, sluice, and the occasional rough bit to keep us on our toes. At the end of this short but delightful 8-mile sojourn, we laughed that our Garmins had recorded 71 feet of climbing (did I mention the word “shuttle”?).

All in all it had been a weekend of juxtaposition—Legends of the Kamikaze party, Monster (energy drink) girls in lace-up bodices, too much hair, make-up, erstwhile podium girls mixing beats at the DJ stand while us outsiders tried to pick a legend—”is that Tomac?”

Troy Lee says he “doesn’t belong in the photo,” but he’s hosting the thing. Everyone’s looking at everyone—are you someone? Who are you? Are you a legend? She looks familiar. He looks like a serious bad ass.

The hoopla of Kamikaze—the adrenaline, the pit, the pros, the crackle in the air—these were ultimately a thin, four-day veneer over a relaxed and self-confident mountain community. The Games were fantastic and from this spectator’s perspective, very well executed. That Mammoth doesn’t need something like Kamikaze to make it worthwhile, but that it so easily can accommodate such an event is a testament its basic fabric.

Five hours from the San Francisco Bay Area (but only when the passes are clear—otherwise, I shudder to think) and also Los Angeles, it’s no quick jaunt. You have to mean it. But after dispensing with Tracy, Modesto, and the various other ails of I-580 that separate Marin from Mammoth, the drive itself was worthy of prose. Out via 120 through Yosemite, back on 108 past Kennedy Meadows, it’s hard to complain (except for the $30 park entrance fee and the $400+ speeding ticket sustained by the significant other, but of course, both could have been avoided with a little forethought…). Mammoth feels like an elder statesman. Open, welcoming of the new, but holding a grace and sense of itself that, at least for now, sets it apart from other resorts and resort towns. 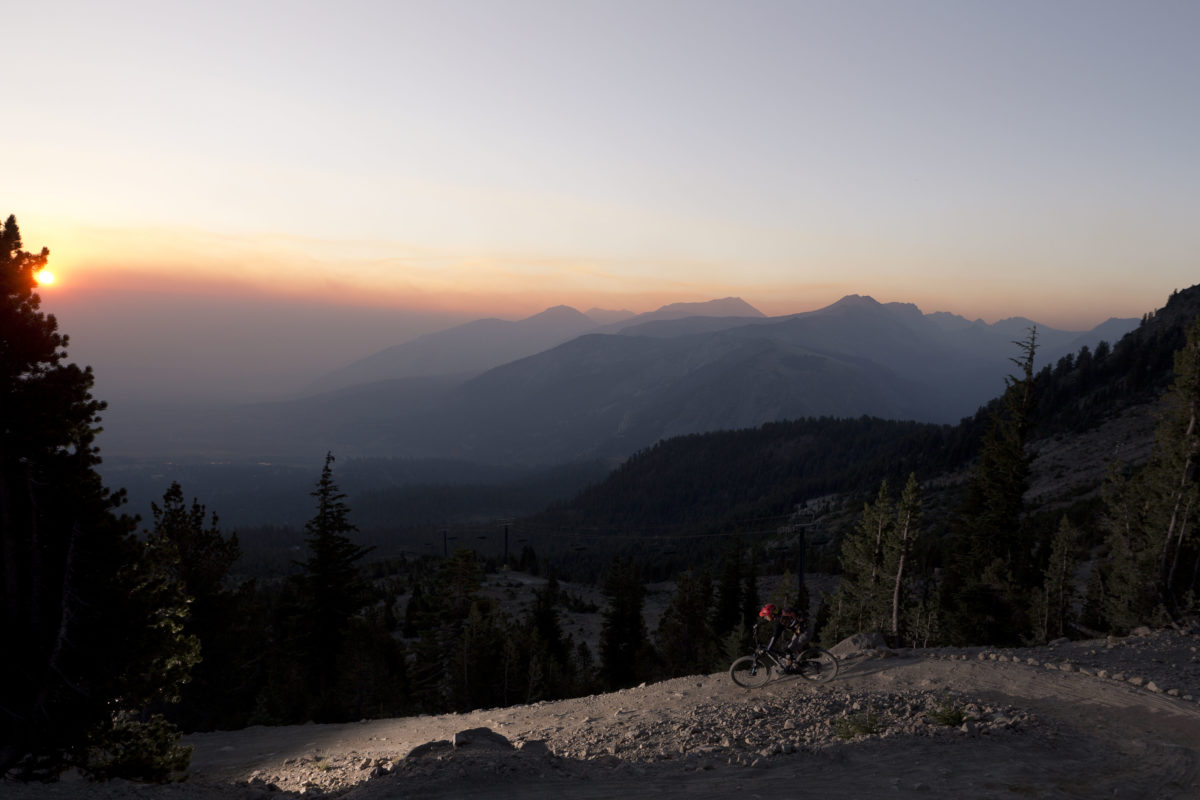 Many thanks to Visit Mammoth for providing lodging, hospitality, and great local guides for our weekend adventure.

Mountain Bike Podcast
Fabio Wibmer Talks Confidence, Perfection, and Inspiration [Podcast #272]
Trails
10 of the Best Fat Biking Trails in the US...
Community
My 2015 Epics: What Are Yours?
Trails
Is Eagle, CO the Next Fruita?