“If you aren’t living on the edge, you’re taking up too much space,” our lead guide, Ryan Kikauka, quipped as we rode quite literally on the edge of a massive gorge near Nipika Mountain Resort in Canada’s Kootenay National Park.

Lengthy stretches of the trail followed right along the rim of the gorge, and I could see places where the builders rerouted the trail inland, as portions had eroded away and fallen into the river hundreds of feet below. In fact, on one section of singletrack I saw light shining between a web of tree roots under my tires, as the soil had disintegrated and fallen away far, far below.

As I reflected on how this epic week of riding in British Columbia on the Sacred Rides Bring Your Partner (BYP) Adventure had unfolded so far, it occurred to me that Ryan’s comment could be interpreted in many ways. There’s the literal “living on the edge” of exposure–mountainsides, and rocky cliffs–and also the adrenaline-fueled push to live on the edge of danger and death. You could live on the edge of material consumption, embracing a life of minimalism. We also met numerous people living on the fringes of society–with one of our guides, Johanna, living the life of a true nomad, with no physical address, traveling the world in pursuit of epic trails and massive rock cliffs. (Be forewarned if you visit her Instagram page: instant jealousy may ensue.)

While perhaps the participants of the Sacred Rides BYP Adventure weren’t quite that far on the fringes of what’s considered “normal” by society at large, the simple fact that we had gathered from all four points of the compass rose–from Colorado, North Carolina, Massachusetts, and Australia–to ride mountain bikes deep in the heart of the British Columbia wilderness, also qualified us as living on the edge. Because the views we had seen, the trails we had ridden, and the experiences that we drank deeply of during that week in British Columbia qualify as the trip of a lifetime. It was an adventure that few people can claim to have experienced. A journey, on the edge of what’s real.

And Nipika Mountain Resort was an integral part of that adventure.

Simply getting to Nipika is an adventure. From the closest town of Invermere, you head to Radium Hot Springs, and then turn toward Kootenay National Park. You drive up a mountain pass, deep into the heart of the park, and 23 miles after leaving Invermere you take a hard right off the pavement.

After leaving the pavement you double back down the valley on a washboard logging road, driving deep into the heart of the middle of nowhere. After 9 miles of dirt roads, you arrive at Nipika Mountain Resort–and at that point, you are 100% off the grid.

Nothing at Nipika is connected to the grid. The electricity is generated by a solar array. There is absolutely no cell phone service. You can connect to the office’s wifi network if you stand in the parking lot, but by all standards you are as deep into the middle of nowhere as you can get… while still sleeping in a gorgeous cabin and comfortable bed, with luxuries like hot showers and delicious food readily available. 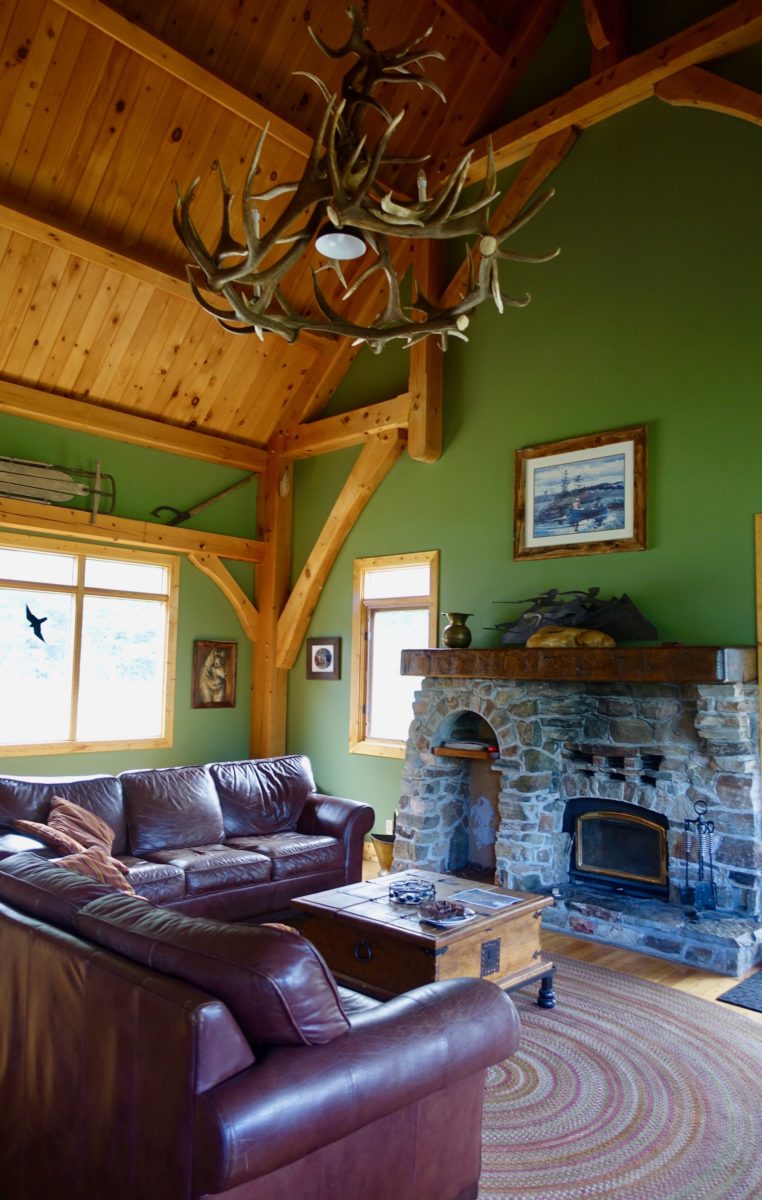 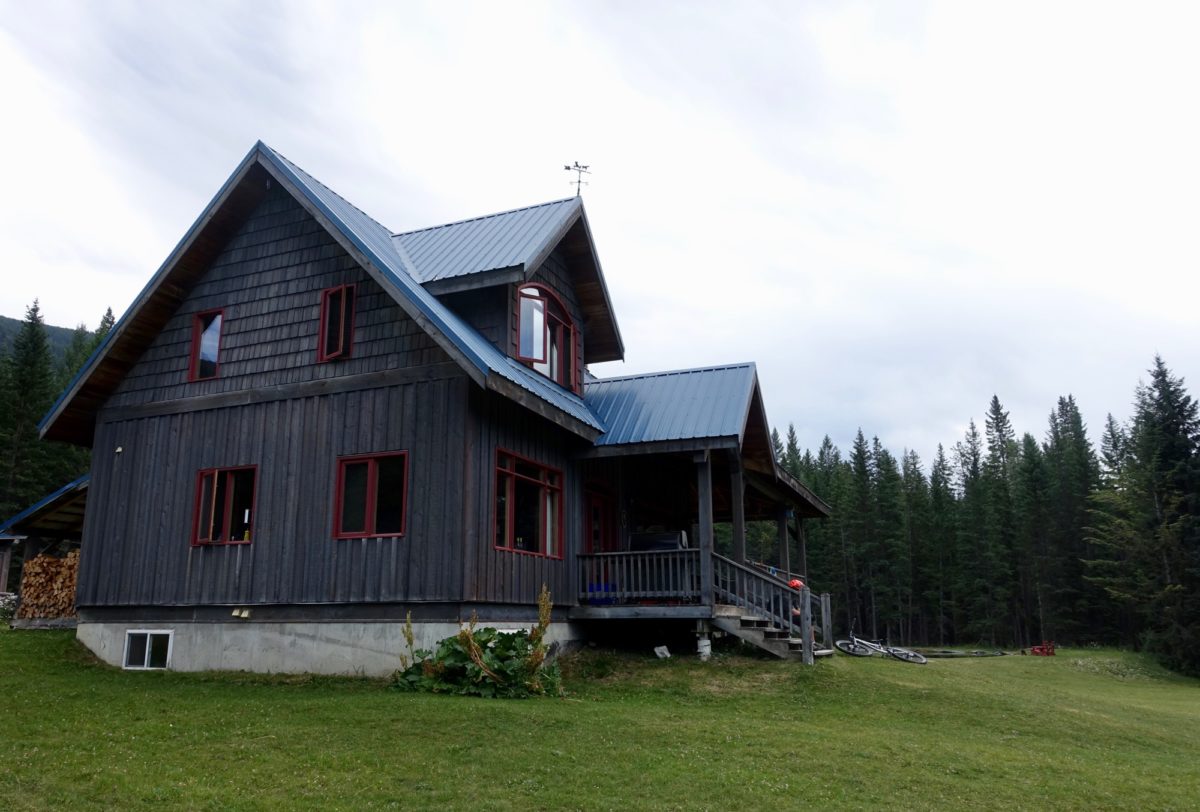 While the cabins vary in size, the one we stayed in had beautiful hardwood floors, vaulted ceilings, a massive fireplace, a beautiful kitchen and dining room, and numerous cozy bedrooms with oh-so-comfortable beds. Ours was one of the bigger cabins, with plenty of space to house our group of 10.

If you so desire, Nipika offers delicious catered meals (which we enjoyed for both of our suppers there.) The lodge also offers guiding for hiking and mountain biking in the summer, cross-country skiing and fat biking in the winter, canoeing on the Kootenay River, whitewater rafting, snowshoeing, and even more.

The idyllic off-grid setting made Nipika my favorite stop of the trip.

If you just want to come up and ride for the day, there’s a donation box at the trailhead, with all donations going towards trail maintenance–but other than that, it’s free. During the winter, it costs $12/day to ride or ski — presumably to cover grooming costs.

The trail system at Nipika consists of three unique networks laid on top of each other. First came the winter cross country ski trails. Lyle Wilson, Nipika’s founder, served as Canada’s head coach for their cross country skiing team at not one, but two Olympic Games. If you know anything about Canada, you know that they take their nordic skiing very seriously. Second came the summer singletrack mountain bike trails. And third, a separate set of singletrack fat bike trails, with corridors wide enough for grooming and grades milder than the summer singletrack, was recently built.

The majority of the singletrack trail network at Nipika is located on Nipika’s own land, with a few of the longer trails extending onto Crown Land in Kootenay National Park, with permission of course. Since most of this network is on private land, that allows the builders to do just about whatever they want. And what they wanted to do was build singletrack as close to the massive river gorges running through the valley as possible, with “no-fall” zones around every corner!

The vast majority of the track here is XC singletrack, with no sustained climbs or descents–after all, these trails are located in the valley, flanked by massive mountains to the east and to the west. Yet despite not grinding up any mountainsides for hours on end, we still ended up logging a fair bit of climbing for so-called “flat” land–1,400 feet of climbing on one 10-mile ride, and over 1,100 feet on our second, 9-mile ride.

Most of that climbing came in short, steep sprints straight up the hillside. One such climb led our guide Ryan to dub it “the unclimbable climb” … unclimbable, that is, until he got an oval chainring. 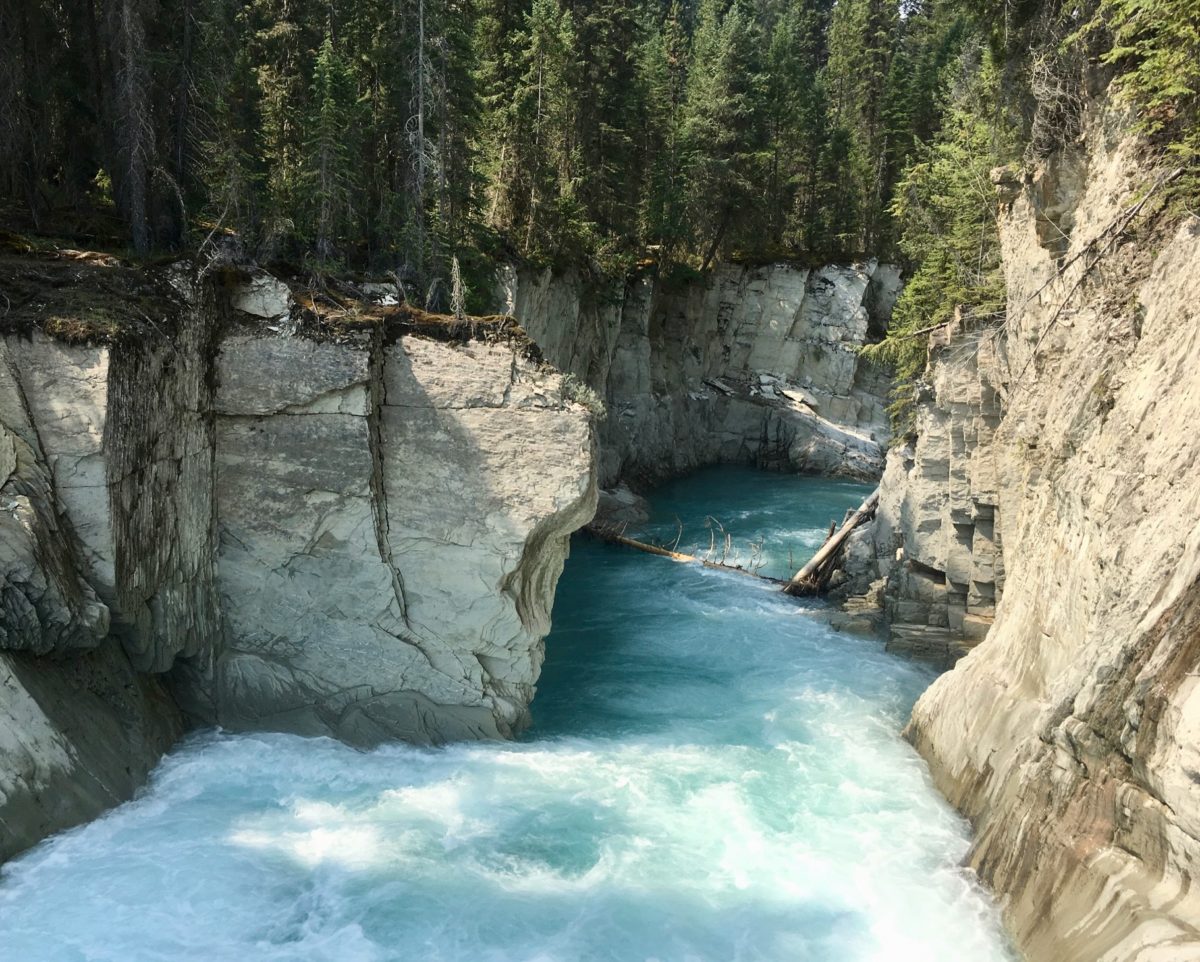 As far removed from civilization as this private network of singletrack is, it should go without saying that you won’t see another soul on these trails. Much of the singletrack had a wild look to it, having seen very few tires over the course of its life. While the folks at Nipika work hard to keep these trails in shape, with wind storms bringing down hundreds of trees across part of the network, the work never seems to end. Some of the trails we rode could have used more love and attention, but at the same time that wild, slightly unkempt flavor added to the intrigue and the feeling of absolute isolation deep in the Kootenay River Valley.

Aside from the occasional punch-in-the-gut climb, the trails here were, like most of the trails on our trip, solidly in the intermediate range. Yet the magic of Nipika doesn’t come from sick, rowdy descents–it comes from the absolute serenity of the Canadian wilderness, the breathtaking views that will have you constantly fishing your camera out of your pack, and the sheer ecstasy of rolling tires on narrow stretches of dirt.

Thanks to Nipika Mountain Resort and Sacred Rides for making this trip possible.