Dirt church is built upon a singular entity: the trails we ride. To the mindful many, desecration of the very substance that keeps us engaged with the present and motivated to improve in life is sacrilege. It goes back to why we choose to mountain bike in the first place: the challenge, the freedom, the personal growth, and feats worth undertaking. But bottom line, the degradation of singletrack is happening, and with the overuse of trail networks happening faster than they can be maintained, the losses are mounting.

After surveying riders from several regions revered for their involvement in promoting healthy trails and advocacy, it wasn’t surprising that a common theme appeared. The controversy surrounding the destruction of singletrack is, and always will be, a point of contention.

The symphony of destruction.

“We all want singletrack,” says David Herbold, a former professional mountain biker and Phoenix local. He’s right. “There are too many people that lack the notion of terrain appreciation and it gets destroyed.” What further adds to the complication is the multi-faceted approach to its ruin.

A cheater line is an alternate line that cuts around difficult sections and corners of a trail, often creating bypasses through undesignated terrain. Some of it is due to riders, some due to hikers and other trail users. These lines are not to be confused with B lines, which are intentionally built and maintained alternate routes. Many parks have implemented B lines because they are sustainable, emplacing signs with a placard (often green or blue) denoting an easier line around a specific section of terrain, and a black diamond for a more technical route.

Why the big deal? Cheater lines are negligent and cause confusion for riders that are trying to ride the trail as it was meant to be ridden. There are a lot of people on the trails that don’t understand trail etiquette, or lack a realistic perspective of their technical skill level. Instead of relegating themselves to something appropriately rideable or simply walking through sections they cannot navigate on a bike, they take action in a way that cuts off part of the designated trail as originally intended, ruining the nuances that keep singletrack challenging.

“Look at some of the greatest trails around Moab, or Colorado, or even closer to home in Sedona,” said Eric Shunk, a local Phoenix rider and trail advocate. “What makes them rad is the challenge! Without the challenge we have no progression. And without progression all we are left with is beat-in doubletrack trails.”

But it goes deeper.

The earth is constantly evolving – and in certain ecosystems, it’s living. The fertile cryptogamic soils of Moab, Canyonlands National Park, and parts of the Colorado Plateau are a fine example of where trail etiquette is undoubtedly important. In fact, staying on the designated trail is the only way to manage the damage done to delicate landscapes. 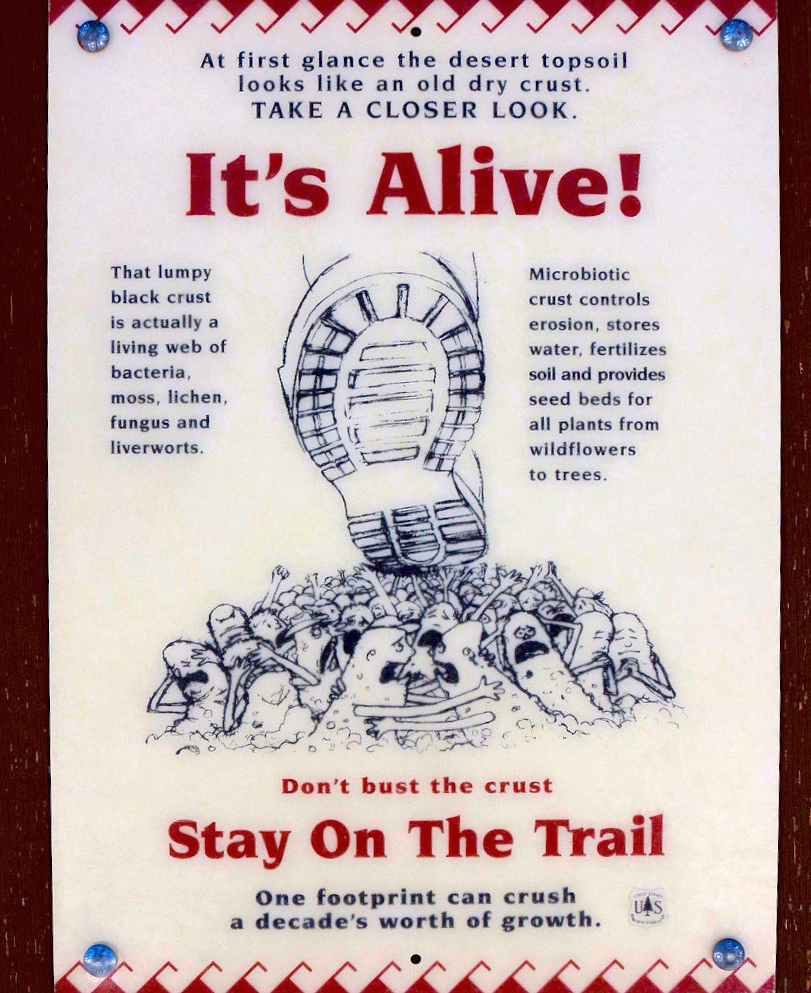 According to some geological research conducted at the University of Akron, this type of earth “plays an extremely important role in the desert ecology. It binds the soil together and inhibits wind erosion and erosion by sheet wash.” It absorbs nearly 10 times its volume in water, helping to direct nutrients into the soil below. The lichens, moss, and fungus that comprise the crust are so fragile that riding off designated trail can destroy decades of growth. Unfortunately, many people just don’t know any better.

Trail overuse is a current hurdle – it leads to trail evolution, the natural deviation away from the original designated line. Not only does this change the foundational intention of the trail’s use, it destroys the landscape. Some trails intentionally restrict certain modalities of use — no bikes, no horses — to help alleviate destructive patterns.

“On the Colorado Front Range, traffic is a problem,” said Paully Niel, who’s been mountain biking for nearly 30 years. “In some parks, an alternating day use scheme has been implemented to reduce trail use conflict.” But hikers create their own wealth of damage. Pedestrians often disregard wet or muddy areas, and even intentionally sabotage the trails to prevent use by others, even on multi-purpose trails.

Located in Phoenix, AZ, South Mountain Park is revered throughout the outdoor community for its rugged terrain and technical riding. As the largest municipal park in the country, it contains more than 51 miles of trail, what was once a pristine amount of singletrack. But overuse has morphed many of the high-traffic areas into confusing networks of blown-out sections and cheater lines. 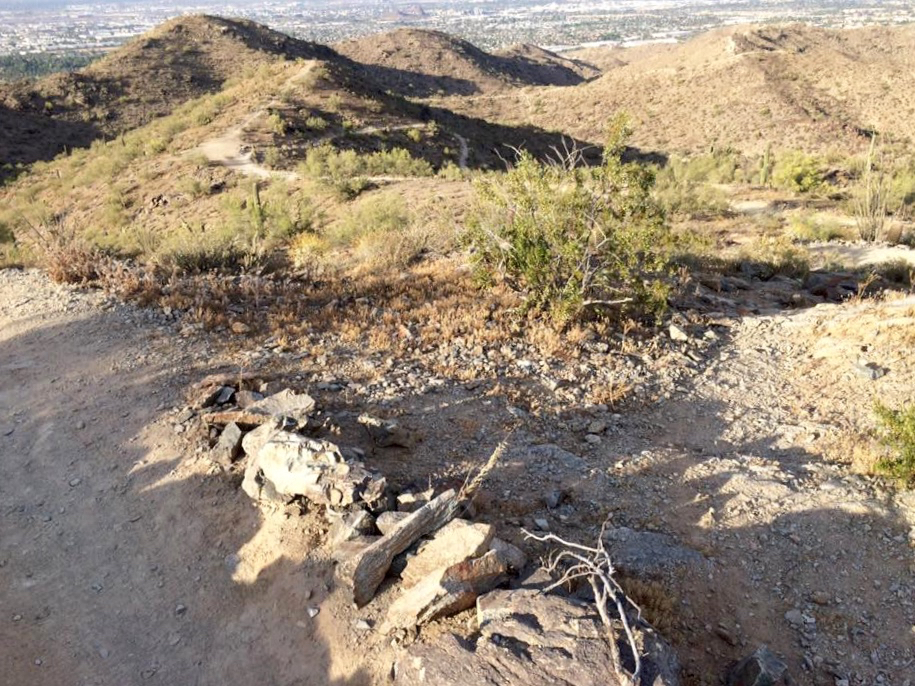 The same problem exists in the Phoenix Mountains Preserve, just north of downtown Phoenix. “The per capita mountain bike use of T100 is high,” says Herbold. This popular trail spans 11 miles from east to west across the entire preserve, making it a common route for not only mountain bikers, but runners, hikers, and equestrians as well. Because of overuse, “the end result becomes a wider overall trail… aka, no longer singletrack.

“With trail maintenance being the do-good thing, what’s the appropriate approach to relegating the proliferation of singletrack death?” Herbold continued. “Is there any viability in vigilante management? The only way to prevent further development of cheater lines is to obscure them with formidable objects: cholla spread across it, rocks (which will get shoved aside time and time again), and so on.”

These thoughts provoke the discussion of yet another perspective. Many people want to point a finger at ignorant users, but poor trail design and lack of maintenance is also at fault. Safety and intelligent construction are both foundational considerations during the planning process. Park officials evaluate the potentials of erosion and risk of injury among everything else – the entire procedure is more complicated than most people realize.

But the outcome isn’t always ideal, and poor design promotes the development of problems in the future. Converted hiking and moto trails aren’t always great for mountain biking, and this conversion sometimes happens more often than it should. It appears cost efficient up front, but in the long run, it creates more damage and more work. Instead, parks could incorporate directional trails, or well-designed parallel trails – both of these concepts are longitudinally more sustainable, both monetarily and environmentally.

In Colorado, “we have major erosion issues from snow and rain,” said Niel. “Because of this, maintenance groups tend to widen out trails to incorporate go-around lines. In certain situations, it isn’t necessarily a bad thing, like on some bi-directional trails. Around a blind corner, a wider trail works.”

“The wooden water bars designed to disrupt the flow of water seem to become challenging over time, motivating riders to create a cheater line which then makes the original water bar useless,” continued Trotter. “There are other types of water bars (ditches and dirt banks, for example) that riders do not go around.” The problem seen here can be prevented in two synergistic ways – with user education and with more effective design.

“My hope is that through articles such as this one, the right conversations will happen,” explains Shunk, “and the right groups will get involved to come to a collective decision with how to move forward with this important and controversial issue.”

What YOU can do to help! 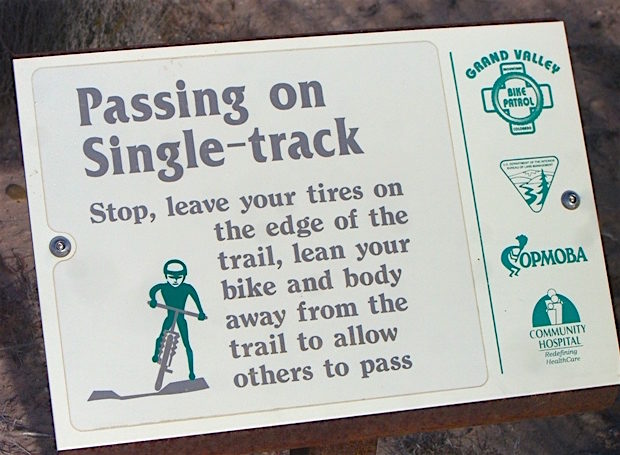 What about rain and wet trails — should you ride?

Different soil compositions handle moisture in a variety of ways. Some dry more quickly, and some don’t stand up to pressure from bikes well. A lot of issues arise from riders that don’t think about how they are affecting the integrity of the trail, creating ruts, erosion, and widening as the unintended consequences. It all comes down to good judgement and respect.

Get involved with a local mountain bike organization.

Advocacy groups and clubs are often affiliated with IMBA and other respected associations, and typically work with community officials and local park rangers to help build and maintain regional trail networks. They organize volunteer trail work opportunities and educational events for both members and the public. Power in numbers!

Jenny Corso
I am a professional scientist, biochemical exercise physiologist, USA Cycling coach and lover of all things mountain biking. I am dedicated to delivering the most current, science-backed knowledge to coaches, athletes, and anyone that is curious about their health and training. And, much of what I do is appropriately mountain bike biased - live your life!

Another good piece, Jenny, and informative to boot.

I was recently in Tucson riding with the amazing folks from Sonoran Desert Mountain Bicyclists and it started raining during our ride. No worries, the trail handled it just fine. But back home, in Kansas City, a rain will shut the trails down for a day or two. Could be more if it’s a rain that hits us particularly hard. It’s tough when you want to ride after a long winter but so worth not getting out there when things are too wet. But every damn year we end up working on trail that was damaged by mountain bikers, hikers and, especially, equestrians, when it’s wet.

Also, your article illustrates the issue with more traffic. There are tons more people out there getting on the trails, sometimes for the first time. And I’ve found that people new to a trail tend to want to “dumb it down” when they should be walking or trying to learn new skills. I stumbled across some people removing rocks from a very technical trail once because, as they said, “one of our riders crashed on this.” I think this is fairly normal response to encountering something too difficult.

It would be a huge undertaking that nobody has time for but maybe something we could all do is start an “initiation” event (or series) to help people get integrated into the culture. The upside is more folks connected to the trails and, thus, additional people to build and maintain trails.

Thank you, Scott!! An initiation series of events would be awesome – something we could perhaps try and get regional organizations to get involved in?

Perhaps you guys can work on keeping hiking trails for hiking

Great article, Jenny. Riding South Mountain in January, I was surprised to see so much of exactly what you describe. I wonder if some areas couldn’t use a little hardscaping, like rock curbing, typical of the type found on some trails in Moab, to keep people routed.