This year’s IMBA EU summit, held in Denmark’s outdoor capital city, Silkeborg, hosted roughly 100 trail advocates, from 22 different nations. Highlights include Denmark winning the “Take Care of Your Trails” initiative after they had 36 separate trail building parties in the month of April. Other fantastic news about new trail networks in almost every corner of the EU and a pair of performances from Danny MacAskill at the adjacent bike festival filled out the weekend.

We aim to bring you as much European trail news as we can collect, and below are some additional highlights from the conference that will be detailed in future articles. 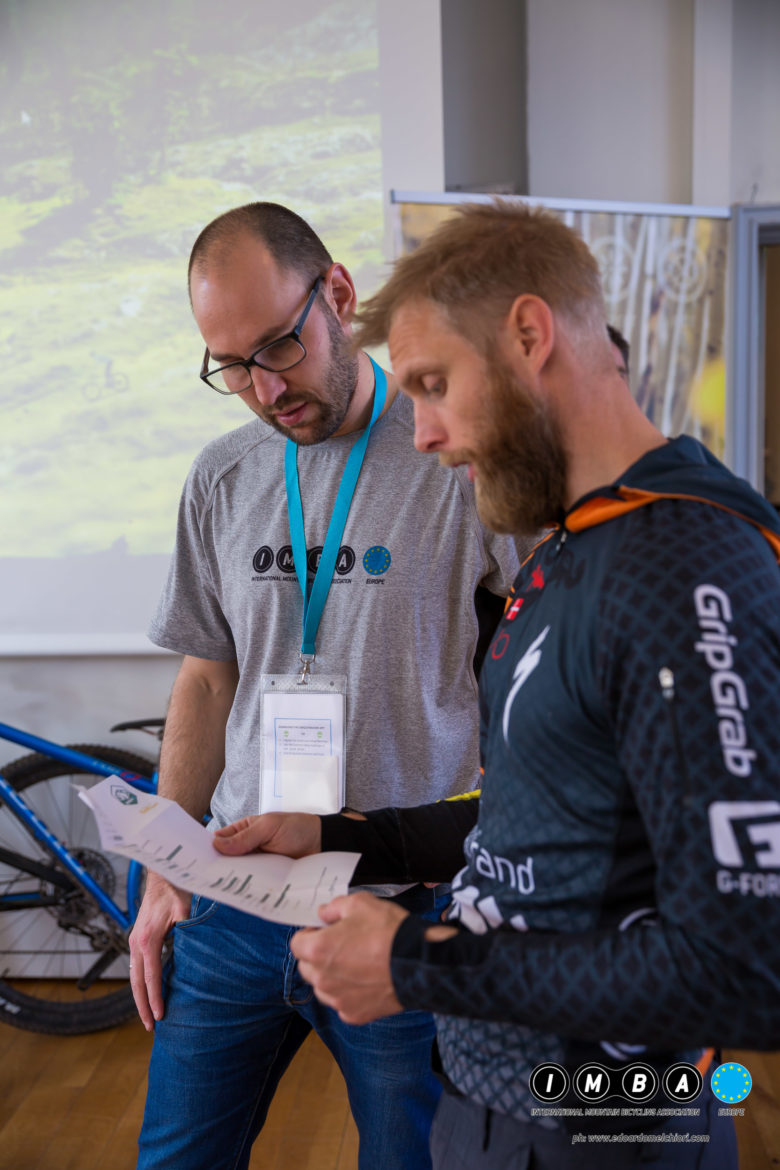 Several of the Danish trail builders were on hand to share the plan for their national trail initiative. They have recently received funding to designate, sign, and authorize 200 trails across the country. The Danish IMBA chapter has a clear vision of making mountain biking accessible for as many of its citizens as possible, with loads of trails near urban centers, and ample green and blue lines to learn on. Though the country’s topography is largely comprised of flat farmland, they have created some impressive trail systems with the hills and forests available. 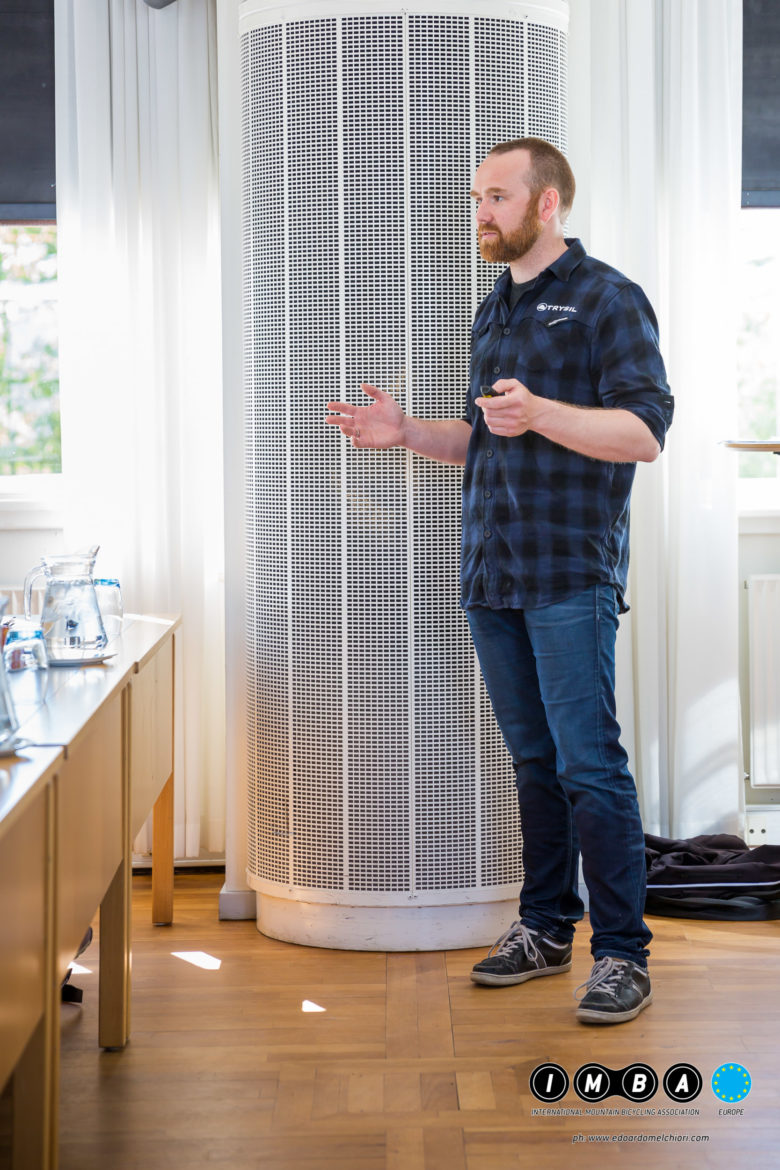 Olve Norderhaug from Trysil Bike Arena in Norway shared statistics and planning information from the growing Nordic park scene. Presenters from Italy’s Dolomiti Paganella Bike also told intriguing stories of their new “bike patrol” riders who will be out on the trails helping newer riders learn the ropes this summer. Look for articles with the managers from both parks in the coming months. 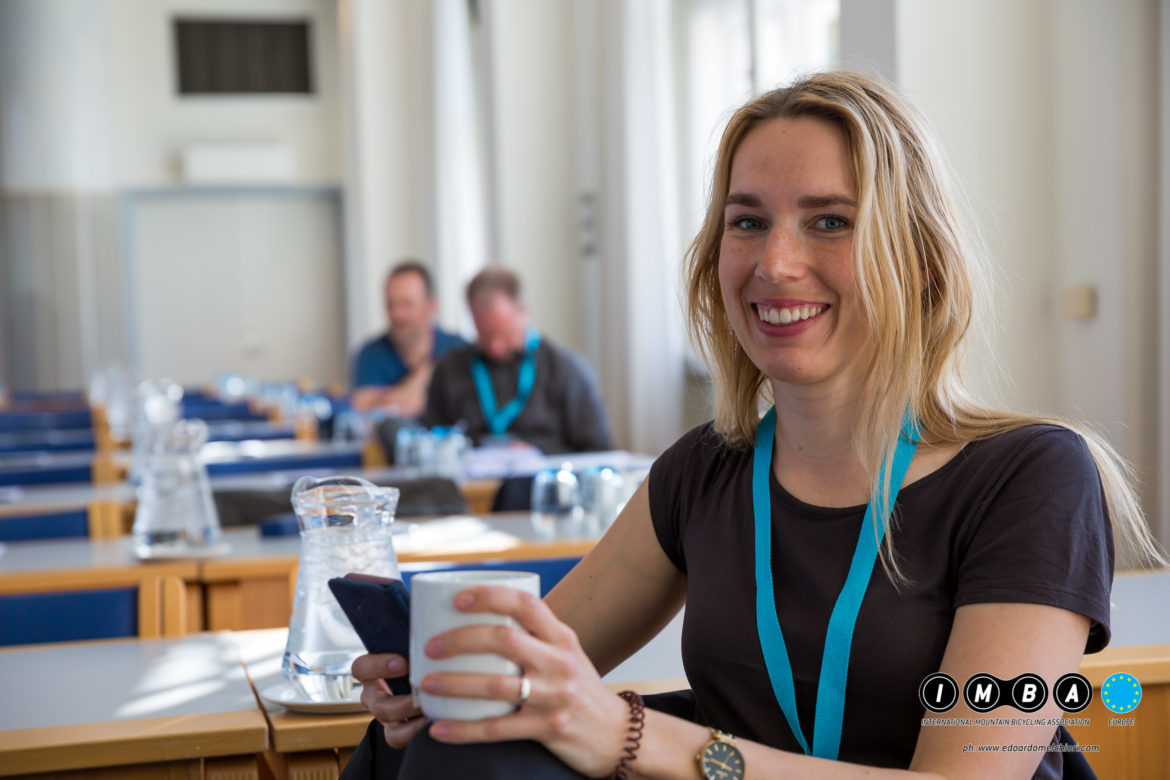 Former Swedish National Cycling Team coach, Annie Söderberg, is now a full-time sports psychologist, working with athletes from a variety of athletic disciplines. We are currently working with her on an article about the psychological side of injury recovery. 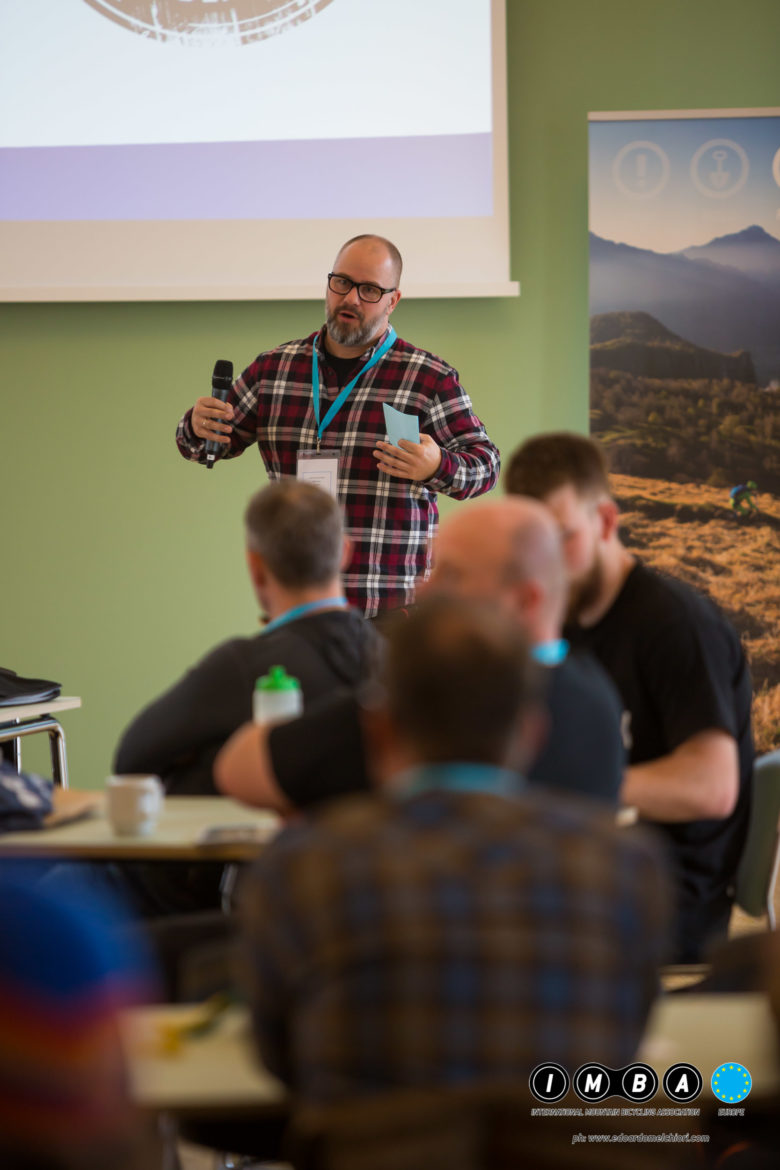 IMBA EU President Thomas Larson Schmidt was a key presenter for the three-day event that culminated with his home country of Denmark winning some important awards. 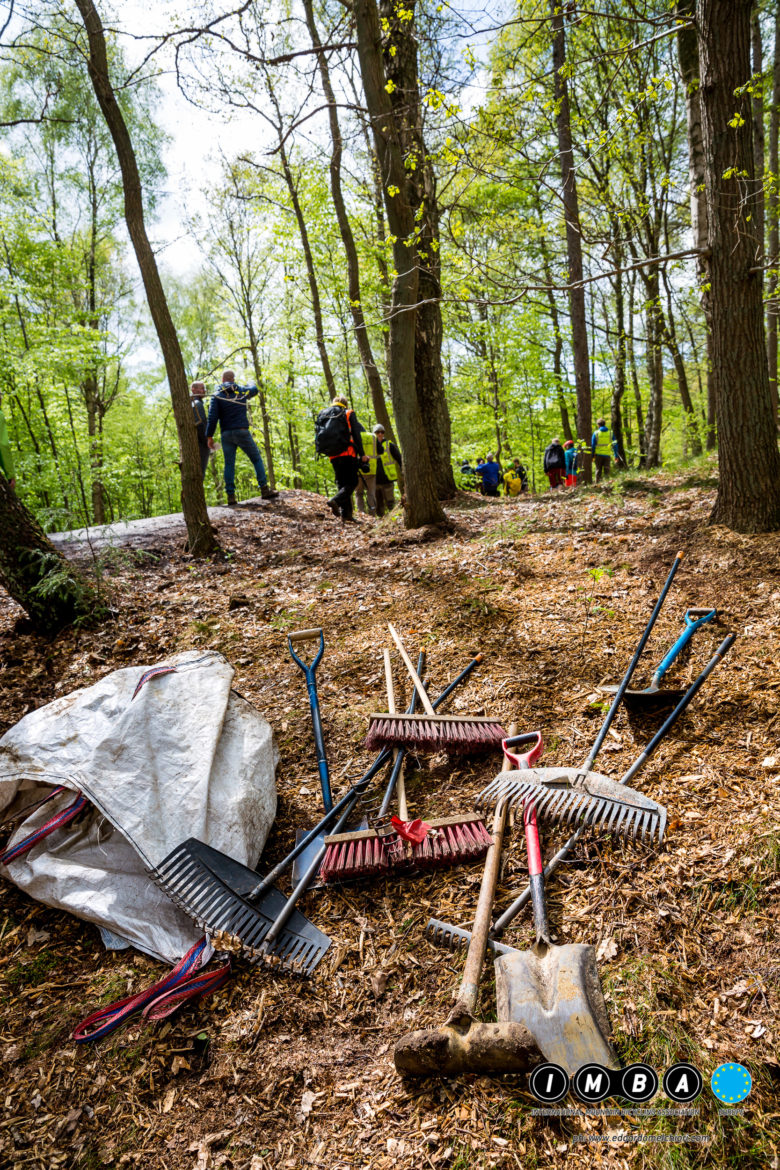 The local builders in Silkeborg were stoked to show off their hard work on our early-morning rides. They have added a sand and gravel mixture to the majority of their tracks to cut down on maintenance, and increase ride time between rainstorms. The trails in Denmark are open and rideable year round. 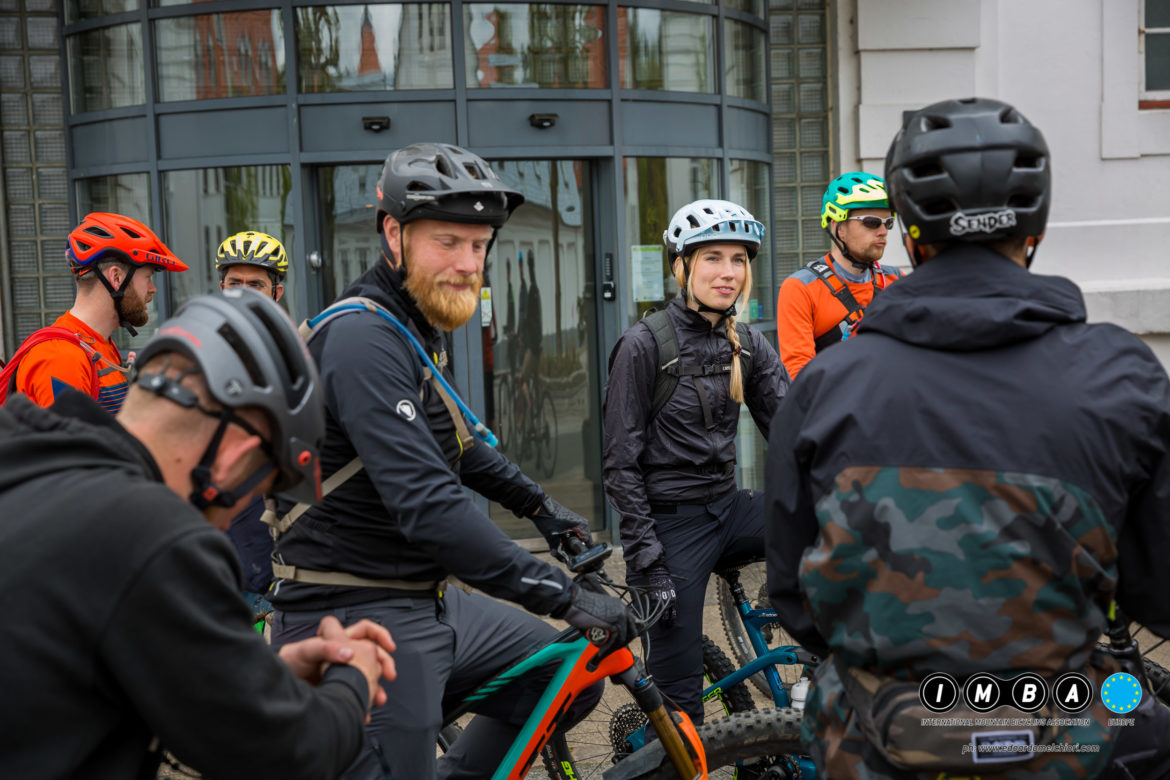 The bearded Viking in the center, Erik Skovgaard Knudsen, not only helped to build many of the trails around Silkeborg, but he made time to lead all of our 7:30 am shreds throughout the event. 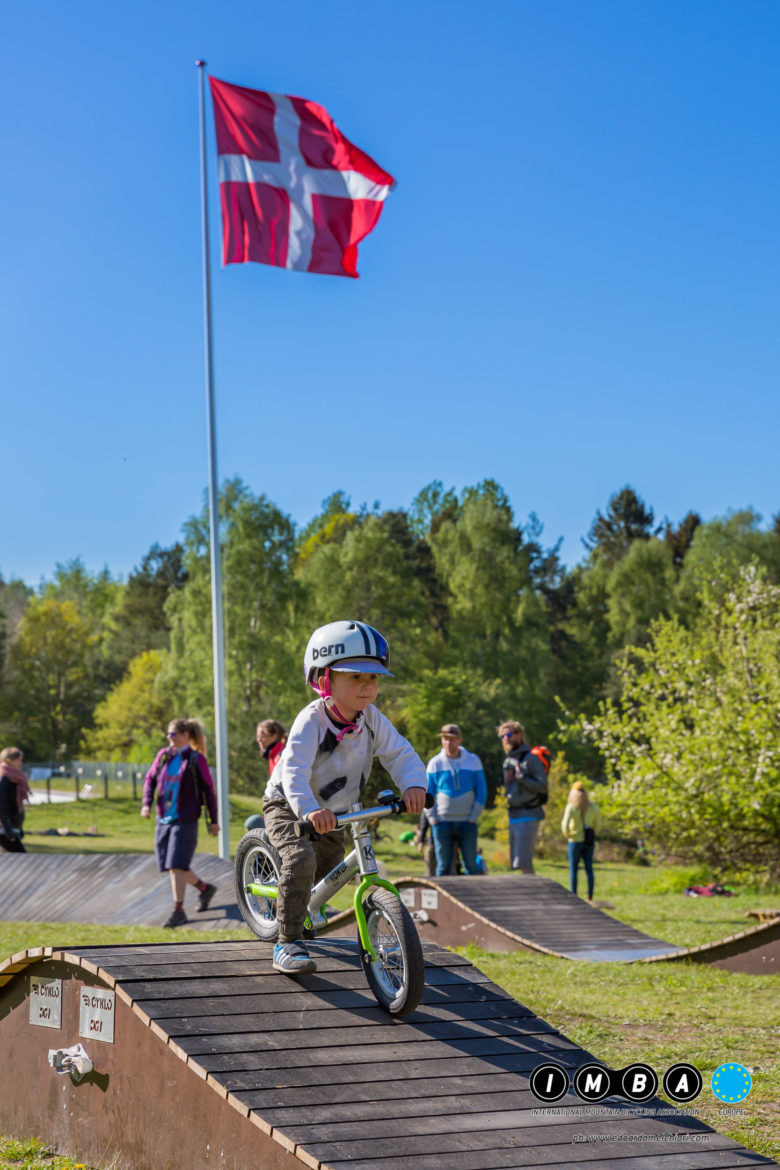 There is no question that Danish trail advocates are interested in getting more kids involved in mountain biking. 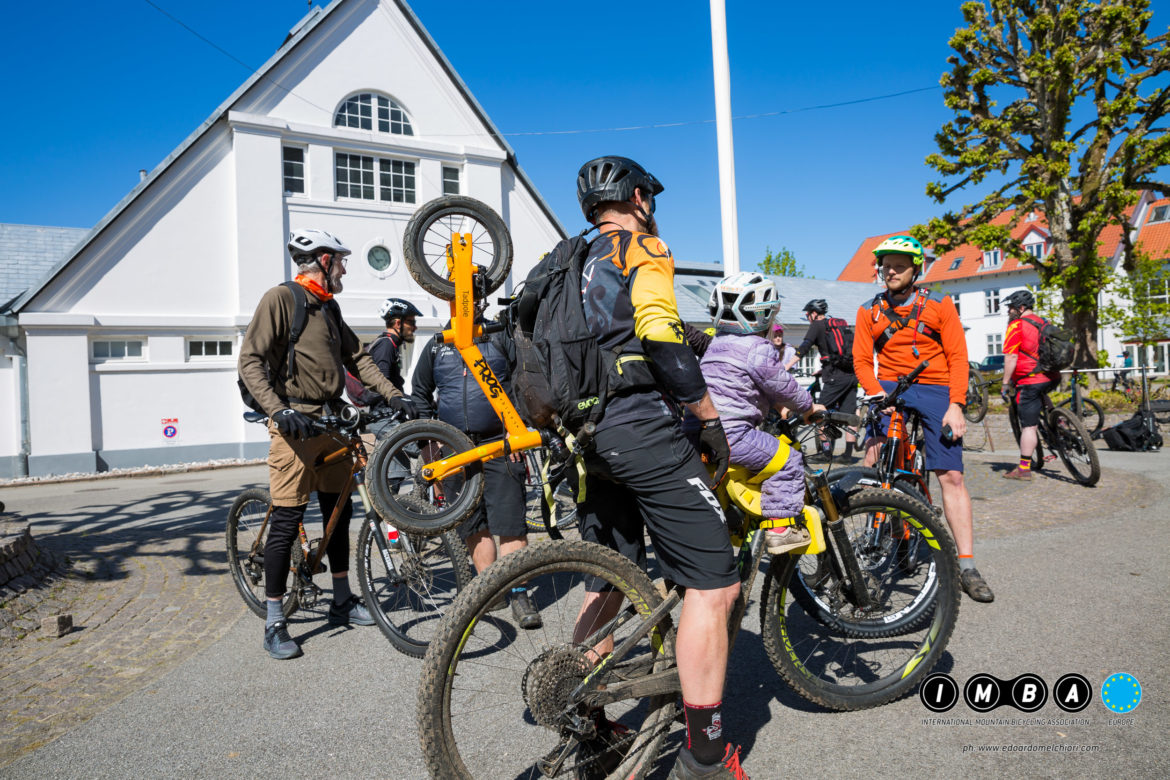 Family fun all around. 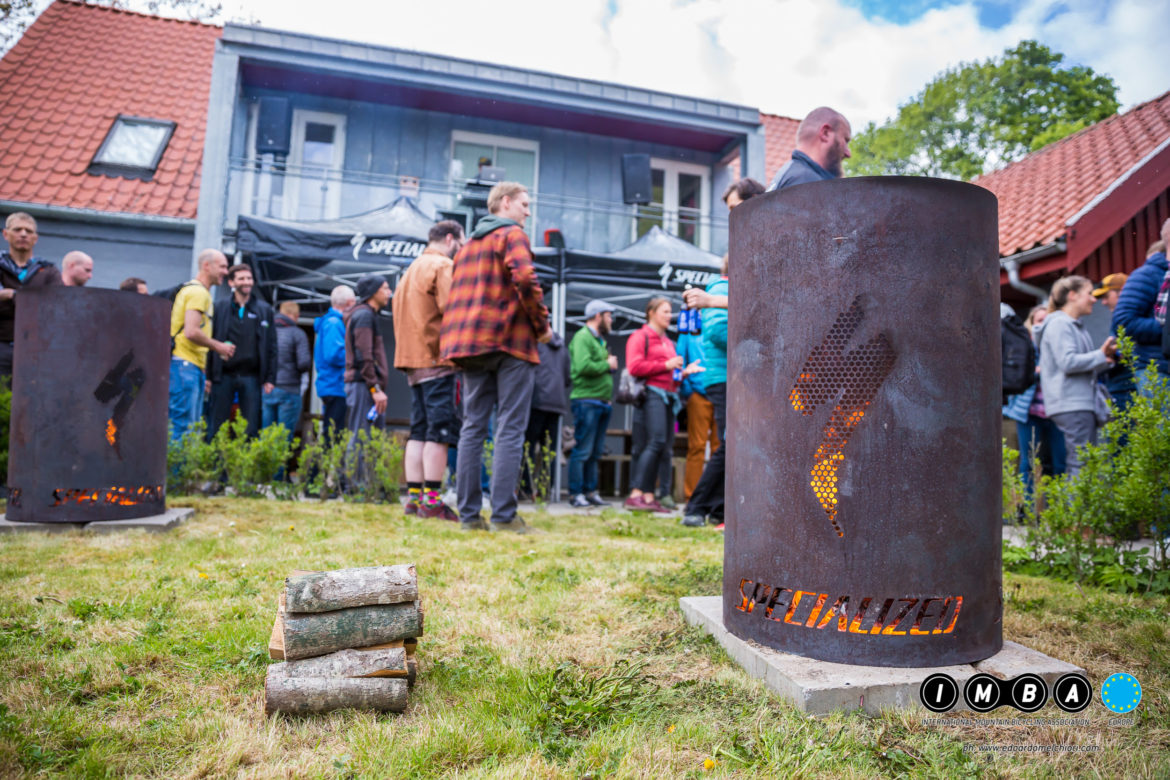 The Nordic Specialized HQ played host to the first evening’s festivities. The offices are hidden inside a farmhouse, with no indication that there is anything other than resting farmers inside. 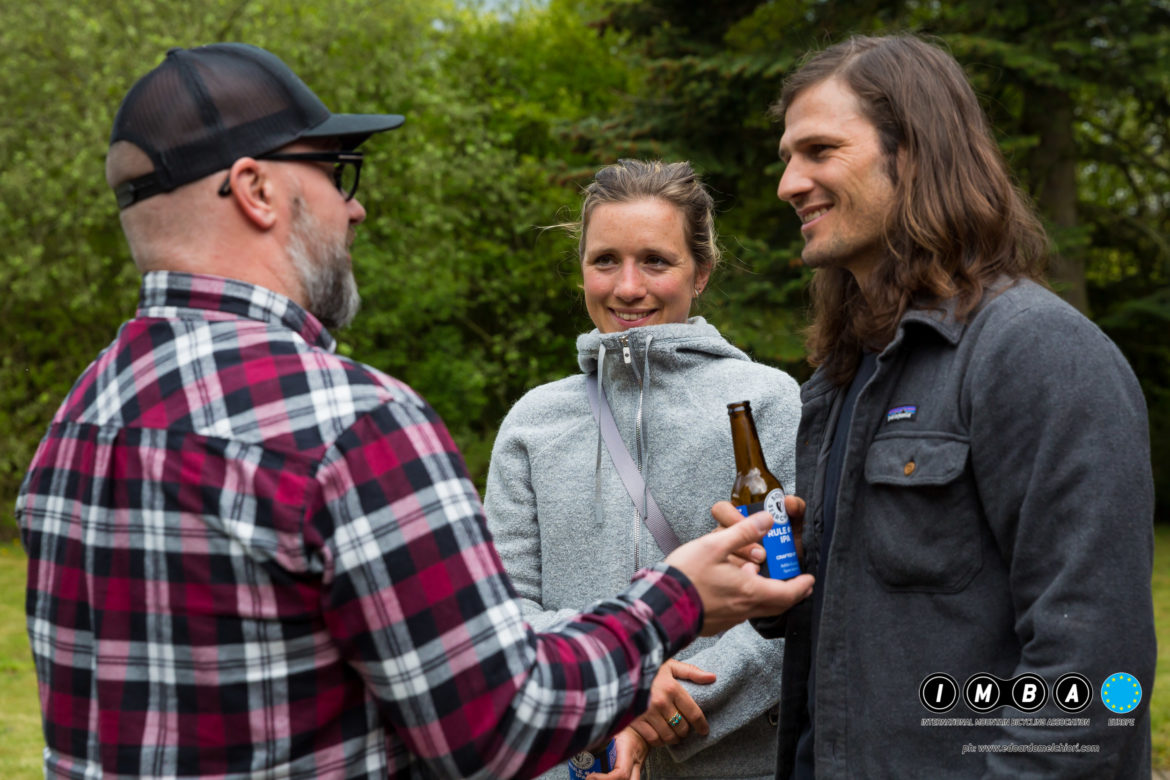 Specialized Trail Advocate and Stoke Activist, Fanie Kok (right), travels the world shedding light on the hard work of our sport’s unsung heroes — the trail builders. We hope to catch up with him for an interview at the Trail Days festival where he will be digging this May. Fanie’s trail program, titled Soil Searching, is one of the few examples across the bike industry of a company giving back to the trails that make a large part of their business possible. 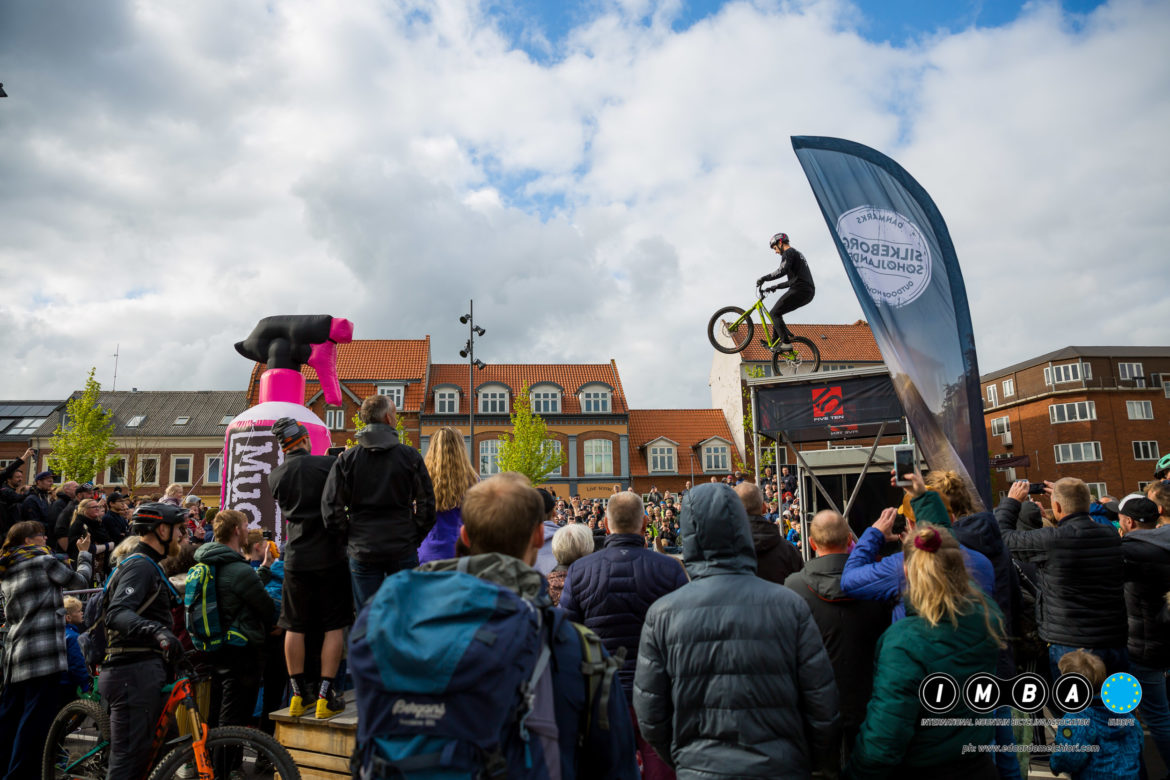 Danny MacAskill put on two shows for the MTB Festival Søhøjlandet, The first was in downtown Silkeborg, with some of his tour mates. 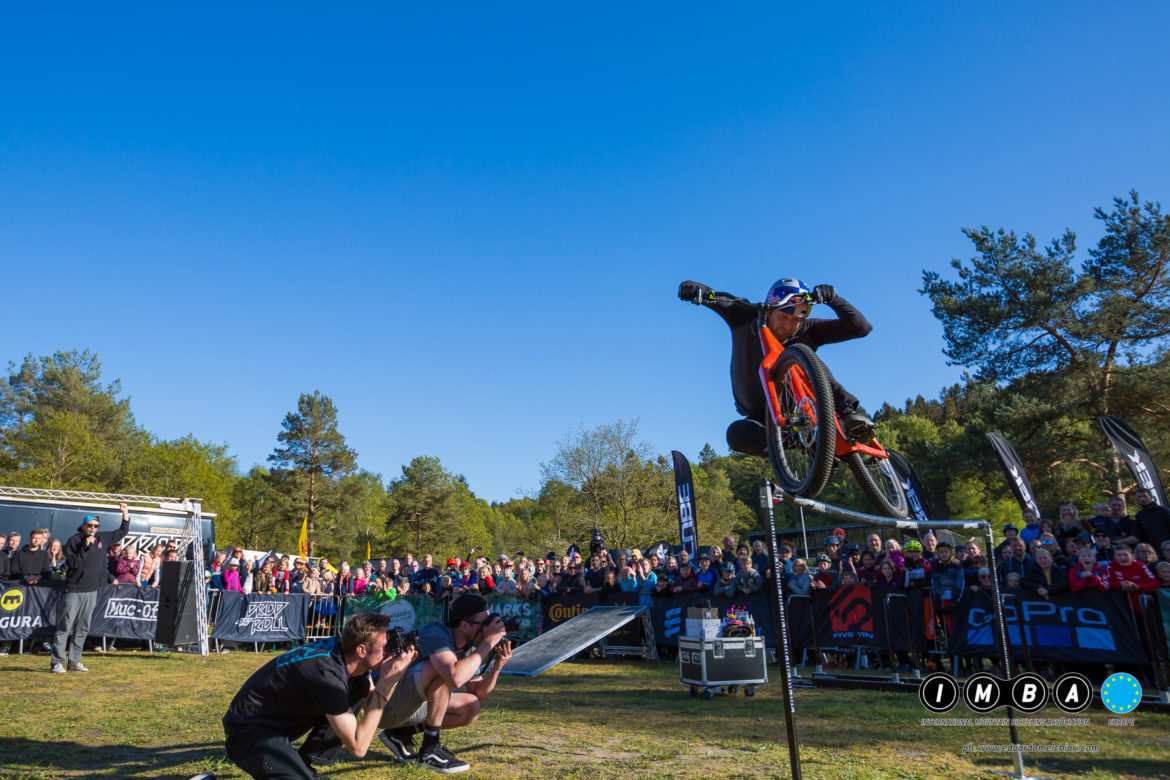 The second show was on the festival grounds proper, alongside some steaming public hot tubs. What this shot doesn’t show is that it’s still bloody cold in Denmark in early May. 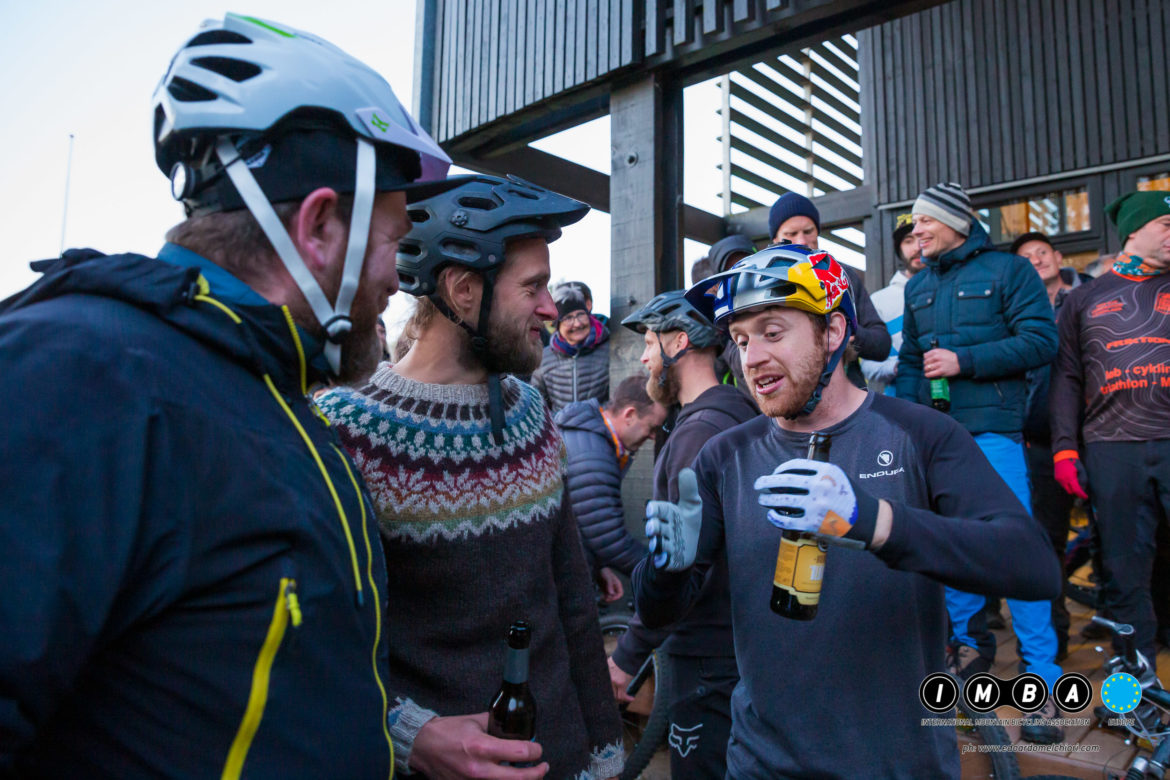 Graeme McLean (left), head of mountain biking for the Scottish Cycling Federation, will soon share his story of incorporating unauthorized trails. In this shot, he and MacAskill are discussing the best lines for a festive clunker race. 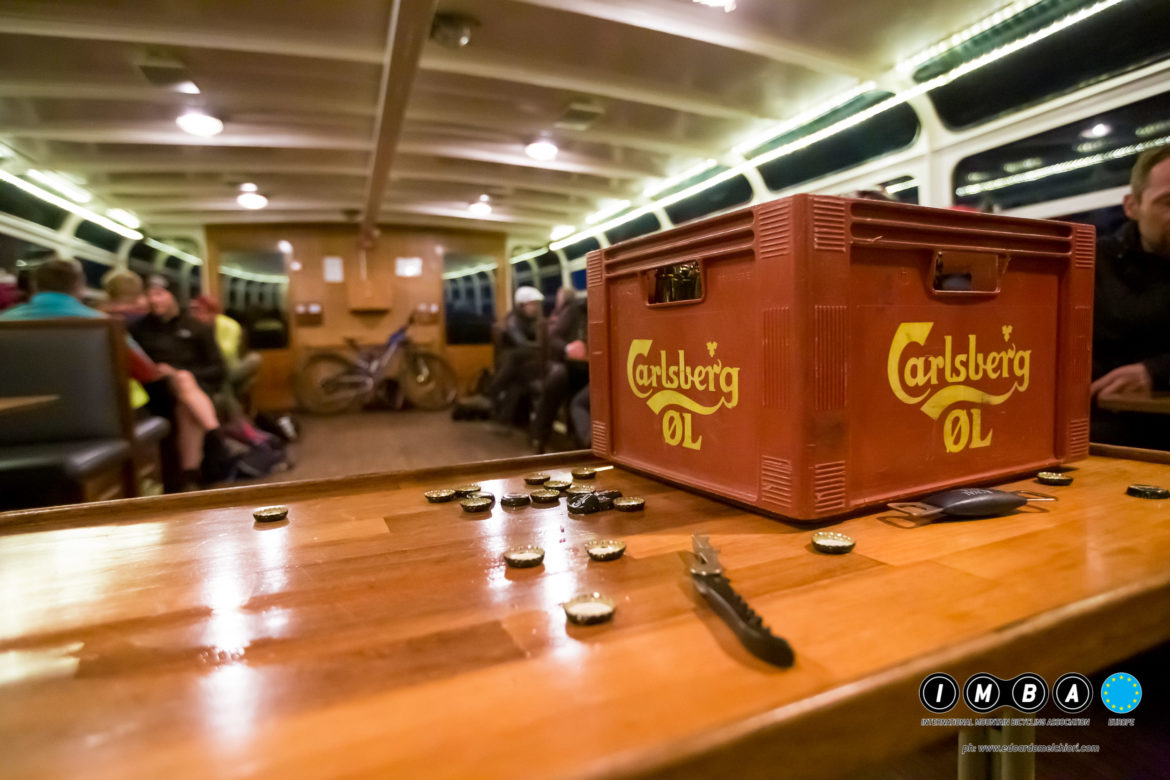 That’s a wrap. We will get back to writing up loads of trail tales from across Europe and hope to publish the first article in the coming weeks.