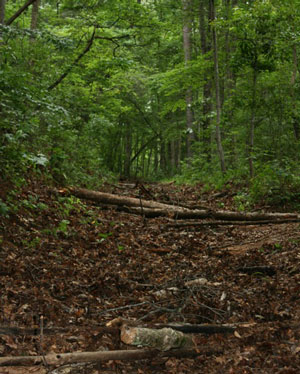 There’s been a lot in the news lately about trail building and advocacy and fortunately most of it has been good news thanks to groups like IMBA and local bike clubs. On the flip side there’s also been news out of California about illegal mountain bike trails being built on public land that threatens to undo years of positive progress.

Just last week the LA Times wrote about an illegal trail network that was found in Limestone Canyon and Whiting Ranch Wilderness Park. Before being dismantled by rangers and volunteers, the trail featured wooden bridges, jumps, and even sandbag-reinforced switchbacks. Apparently several other Orange County parks have seen illegal trail construction as well, though the Limestone Canyon trail was in a particularly eco-sensitive area.

Up in Marin County they’re still bitching about us and one letter to the editor of the Marin Independent Journal points to the damage freeriders have done in the Tahoe area by building illegal trails. Here’s an excerpt:

(L)ast summer the U.S. Forest Service announced the discovery that renegade mountain bikers had secretly cut up to 30 miles of trails in the Tahoe backcountry during this past decade. In 2009, the USFS spent $29,000 to close three miles of illicit trails at Tahoe alone. Despite having 255 miles of trail access in national forests around Tahoe, that isn’t enough for the free-riders.

The writer goes on to connect the irresponsible behavior of an unknown group of riders in the Tahoe area to all mountain bikers and voices her opposition to an alternating day use plan split between hikers and bikers in Marin County. It’s really a shame because the alternating day policy seems quite reasonable and this person assumes mountain bikers won’t follow the rules because of what happened in Tahoe.

On the spectrum of things that are bad for the reputation of our sport, building illegal trails has to be one of the worst (if not the worst) things we can do. So if you’re thinking about putting a shovel to dirt this spring on land you don’t own or have permission to use, give us all a break and volunteer with your local club to improve existing trails.

Rat Bastards! I guess with everything, you have irresponsibility. Often time the minority ruins it for the majority. This is a great article for those who didn’t realize the how big of a deal illegal trail building is and how adversely it can affect our community of riders nationwide.

Great article Jeff. It is very important for trailbuilders to build legally. It is very easy to contact your local bike club and ask them for opportunities to build. If they can’t help you, your local government service center can help you get in touch with different land managers. Don’t be lazy, make a few phone calls and e-mails before you start building. It will give you peace of mind and ensure the longevity of our great sport.

No doubt the illegal trails are a burden we carry when dealing with the PR of mountain biking. But there is a balance that can be struck. The Marin IJ is THE MOST Anti-MTB rag with soy based ink and it’s at ground zero for the birth of MTBing. They are a militant aggressive bunch….but the trails we have in Marin and many Bay Area locations started out as “bootlegged” trails that ALL users poached and then they eventually became “legal” via ample multi-use. NOT defending illegal trail building at all..just some balance.

I have a place in Tahoe and the concern for the illegal trails there is primarily injury due to the remoteness and challenges on getting assistance to some locations. Some of these trails (30 illegal miles discovered or built in 10yrs…come on, they made it sound like someone is paving roads) are in most cases the trailings of hikers/trampers that got lost, ran out of supplies and headed off down wildlife trails to get out, and through use became a “known” route. If someone humps lumber into the Tahoe Basin to build skinnys and jumps, they should drawn and quartered with ATVs and left to desiccate.

As a side note..in my town of Lafayette, CA illegal jump tracks were built on a land grant for a community park..beside an endangered habitat. Certainly the outlet of teens looking for more excitement. The result…the town is seeking to make it legal and funding the development of a bike park as it adheres to the original charter for the land use activities. http://www.lafayettebikepark.com/Design_files/LBP%20Final%20Design%20Plan.a_1.png

In the end, conscientious riders can do much to contain the damaging behavior through peer pressure and adhering to basic IMBA courtesies.

My question – how were 30 miles of trail built without anyone noticing???

Yeah so clearly the bit about the Tahoe trails could be mostly untrue but the point is the writer believes it’s true and is using it against mountain bikers who live hundreds of miles away. You know how the saying goes: One bad apple spoils the whole bunch.

Suvacrew, thanks for the Lafayette example. Sounds like it worked out in the end but I wonder how things would have gone if folks just asked to build a bike park to begin with? Of course we’ll never know…

We are running the path that snowboarding did in the early 80’s….Snowboarders weren’t ski lift legal, chased off of resort facilities and banned from USFS land….until people concluded they were banning a revenue making opportunity through fees and consumption in local businesses.
An image clean up and people catching us doing “good” will go a long way.
But again, you’ve got to discount the Marin IJ remarks that constantly pepper MTB activities….out of context.

I live in the Marin area. This seems to be one of, if not the biggest debate out on the trails. 90 + percent of our Single-track trails out here are illegal and reserved for equestrian and hiking use. The looks you get from people (mostly hikers) even coming down a legal fire road are not pleasant. I also love to get on some of these trails and hike with friends and my daughter. I do not see why they can not split some of the Single-track out for MTB use. I agree making illegal tracks is not the best idea because you never know if you are in an eco-sensitive area or maybe an area that carries Sudden Oak or whatever the case may be. It is not our land to begin with. What we need to work on is reaching an agreement good for both parties that would allow us all to have our fun. I like the reply up top about the Snowboarding. That is the exact same thing and it is basically a prejudice against one sport to the next. Total crap. You think that people that hike or enjoy these trails for any use would want the other to have a good experience. After all isn’t it about getting out in the open and using the land to create a good time? Marin needs to get it together as far as legal track or we are always going to have rouge bikers looking to get a bit more than what is offered right now (which isn’t much at all)

Not condoning actions of the freerider’s building illegal trails, but they do have it the worst of ALL mountain bikers. Simple singletrack trails have enough trouble passing public approval. When you throw in someone wanting to build jumps and stunts on public land, setting up potential liability for injuries for the land owner, it gets even harder to a deal approved. As stated above, a lot of people automatically assume bikers are irresponsible miscreants. Start so adding the potential for injury with freeriding stunts and it REALLY gives them reason to shoot down new developments.

I would be really interested to know where these illegal trails area. Living in Tahoe it is made apparent what trails are legit. Hikers will yell at you and whatever else if you shouldn’t be on that trail. Anyways I am not sure if I believe this. I just hope that some of the trails that I know aren’t illegal because they are sick!!!

Another article out today about a newly discovered illegal trail system in Portland, OR:
http://www.kptv.com/news/22656696/detail.html

Well I have skateboarded, atv’d, bmx’d, moto x’d, and MTB’d, it just seems it’s all wrong until the lawmakers son or daughter decides to “be cool” and try it.