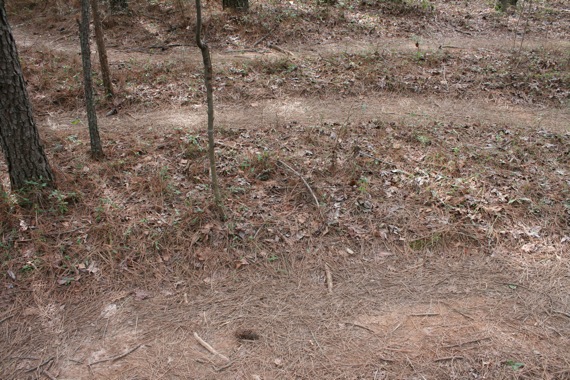 Land managers tend to refer to these types of trails in a number of ways, though rarely as illegal per se; instead they call them: unauthorized, user-generated, social trails, or non-system trails. User-generated trails have existed since well before the days of mountain bikes and hikers are just as guilty (if not more so) for creating many of the social trails that exist today in local, state, and federal parks.

Recreational ecologists and others who study trail systems have come to the conclusion that if official trails don’t take users where they want to go, unofficial trails will pop up to fill the void. This means, for example, that if a trail takes the scenic route to the banks of the river, hikers and bikers will find a more direct route to get there. And if there’s a sweet boulder in the middle of the forest, mountain bikers will beat a path to shred it.

To give you an idea of the scale of the problem, in California alone, officials estimate there are more than 13,000 miles of non-system trails located on state and federal lands. Many of these trails are unsustainable from an environmental perspective and can be dangerous as well. The downside is that government agencies end up diverting funds from official trail building and maintenance projects to close and remediate the unofficial trails that spring up. Some agencies have had success charging illegal trail builders with the huge costs of clean up – but that’s only if they’re able to catch the culprits in the act.

In certain instances, social trails can become official trails which tends to send a mixed message to unauthorized trail builders. This can happen due to the ongoing failure of signage and trail closures or an eventual recognition that users prefer the unofficial routes over the official ones. Of course this is pretty rare and can take years – and in the meantime the risk of fines and other punishment is high.

Mountain biking was born out of a non-conformist culture so there’s always an undercurrent of flouting the rules in search of the best dirt. At the IMBA World Summit we heard about one community where bumper stickers were printed that said “Don’t be the Ranger’s Bitch – Ride Illegal Trails!” Clearly this doesn’t help open new trails to bikes any more than constructing unofficial trails does. 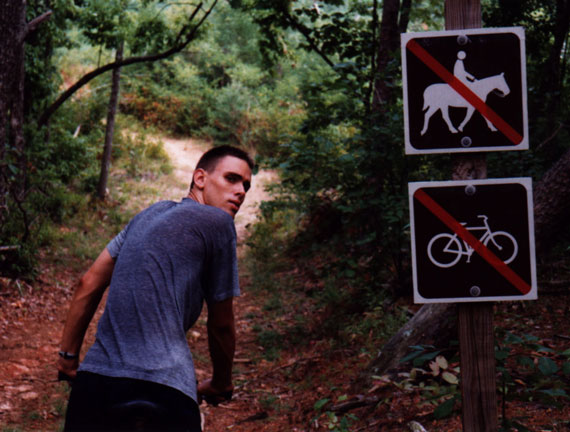 The author around 1997. In my defense I was an idiot back then as the lack of helmet and sweaty cotton t-shirt attest. We didn’t actually ride this trail at Bull Mountain that day but thought at the time it would make a funny pic.

One more definition of an illegal mountain bike trail is any trail (official or otherwise) that is closed to bikes but open to other users (hikers, equestrians, etc.). IMBA’s conservative stance is that unless bikes are expressly allowed on a trail it should be considered closed to bikes (harsh). The fines and penalties for riding these trails can be just as nasty as if they were unofficial trails – just ask the Riding the Spine crew about mountain biking in the Grand Canyon. Suffice it to say if you’re not interested in being taken into custody by federal agents you may want to stick to the legal trails.

Illegal mountain bike trails will never completely disappear and it’s up to each individual to make responsible riding decisions for the greater good. Know that if you commit the crime you gotta be prepared to do the time and be accountable to all the other mountain bikers who are affected by your actions.

Is that you Trek7? If it was, you were looking pretty young bro. Great article.

Yup, that was me 13 years ago. Glad you liked the article!

With more and more local land managers being put in charge of making these decisions within their districts sometimes it really pays to just ask about a trail or building a new one. Quite often they are pro MTB but with limited staff and $ for trail construction and upkeep. Of course it is always advised to get permission before building anything but there are exceptions, I recently wrote a post about just such a trail on my blog-
http://dchristianson.blogspot.com/2010/05/new-trail.html

The other term used by our local parks admin is “bootlegged”. I’m personally guilty of playing on the restricted ribbons of dirt…but usually late at night or very early in the AM to avoid detection and or interfering with other users. I have taken the $260 ticket by a State Ranger for riding on a clearly marked trail, that was an eye opener and elevated the consciousness of my fellow riders. I have since fought another ticket successfully due to positive interactions with officials and providing some insights.
But most park managers don’t want to restrict use of anyone, especially on the unofficial trails that aren’t in the system nor are they maintained for any user.
I’ve found..and this is by now means an endorsement of banging off past the bike sign with the red “X”, that if you slow down, stop, give ample notice or ask for permission to pass (especially equestrians) you can defuse much of the hostility towards MTB riders on any trail.
As for “building” an illegal trail…never entered my mind.

From an ecological standpoint, this would be less of an issue if mountain bikers took a few courses in trail ecology, which at least for New England are provided on occasion for free by local conservation groups (such as Squam Lakes Association), and biking associations (NEMBA, IMBA, etc.). It is possible to make sustainable trails illegally!

I don’t have a lot of time put the bikes in the car and drive to a trail. So, I just find a small trail hacked into the brush on a random hill and see where it leads. It sure makes a great adventure. Anyway, as far as I know, this is completely legal in an illegal sort of adventuresome way. If that makes sense!?

We are challenged to find man power to build all the legal trails in our area that land managers are asking us to build. We need the illegal trail builders to come to the light and put their labor into legal trails. There is a big oppurtunity cost in these illegal trails.

[…] side of mountain bike trail advocacy. One of the articles that came out of the trip, about Illegal Mountain Bike Trails, spurred some interesting discussions about the […]