When mudhunny and I started singletracks back in 1998, our mission was simple: to help mountain bikers find the best trails. Eleven years later it’s still our focus and to make sure that happens we personally ride and report on as many new trails as we can.

Last week I put together a list of 5 unfamiliar trails in middle Georgia that I found on a local MTB club’s website and decided to see what was up. The Google Map I built said the round trip would be close to 300 miles and 8 hours of driving but that’s a small price to pay for riding 5 different trail systems in a single day. At 8am on Wednesday I was off… 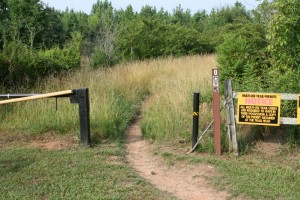 I hit the first trail of the day, Charlie Elliot Wildlife Center, just before 9am and found the parking area empty (no surprise). This trail has an unusual permitting system I hadn’t seen before that involves filling out a permit to take with you and depositing a carbon copy in a locked bin. The “trail” turned out to be horseshoe-pocked doubletrack that was wildly overgrown with high grass but it was well marked and probably not a bad choice for beginning riders.

Heading to the next trail, my Google Map directed me onto some crazy dirt roads and after several miles I was pretty sure I’d see the Dukes of Hazzard coming around the bend at any moment. At intersections I rarely saw signs with the name of the road I was turning onto, only signs for the road I was turning off – sort of a “guess and check” method of navigation. I finally emerged onto a paved highway and made my way to Bartram Forest in Milledgeville. 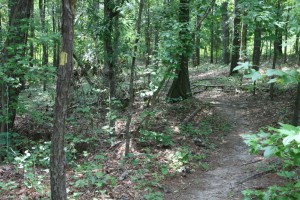 My youngest brother goes to school in Milledgeville and he actually told me a little about the trails at Bartram Forest but when I got there all I could find was miles and miles of doubletrack. Like Charlie Elliot, much of the doubletrack was overgrown and I was starting to get frustrated until I found it: singletrack! It turns out I went the wrong direction initially and totally missed the singletrack right beside the trailhead. The singletrack was tight and fast but unfortunately way too short. Then again, I suppose you take what you can get in this area. 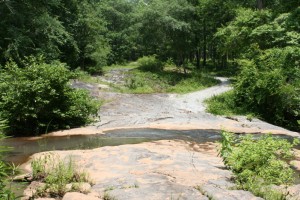 By now it was lunch time so I ate a sandwich in the car as I drove to the next trail: The Piedmont National Wildlife Refuge. I was looking forward to this trail the most because I saw pictures online and it looked pretty good plus I had read there were 12+ miles of trail. I strolled into the visitor’s center and asked the ranger which trails were open to bikes to which he replied, “None of them.” Ok, but what about the gravel roads? Only if they are open to cars. Yuck.

I’m a professional, though, so I grabbed a map and headed out on the gravel. I didn’t see a single car on my 13 mile loop but I did see some turkey and deer along the way. At this point it was getting VERY hot (mid-90s) and halfway around the loop I was ready for it to be over. To be fair, though, I’d say the Piedmont National Wildlife Refuge is a good place to get MTB training rides in on the miles and miles of gravel roads.

After the hot ride I debated skipping the next trail and heading home but after pumping the AC in the car a bit I was refreshed and ready for the Camp Thunder trails. As a Boy Scout I stayed at Camp Thunder several times and though I knew nothing about the bike trails, I remember having a blast canoeing on the Flint River nearby. Anyway, to make a long story short, upon arrival a staff member informed me that the trails had been closed to the general public for a year and a half. Nice. I’ll never trust a mountain biking website again 🙂 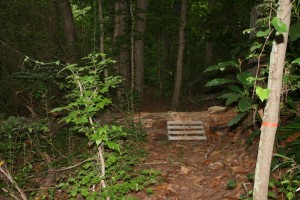 Trail #4 was a bust which left just trail #5 before my epic trip came to an end. I didn’t have high hopes for the Kiwanis Fairgrounds Trail in Griffin since the woman I spoke with at Camp Thunder said there was nothing there as far as she knew. The trail was sorta on my way home anyway so I soldiered on. It turns out the directions I printed were perfect and I found this short trail gem tucked between the National Guard Armory, the fairgrounds, and the city airport. The trails were twisty, tight, and fun – the perfect capstone to my adventure. My only complaint is the trails were waaay too short – probably less than a mile – but like I said, you take what you can get.

I’m addicted to exploring new MTB trails and no matter how many bad trails I ride there are always a few cool discoveries that make it all worthwhile. Get out and ride some new trails this summer, then share your reviews here on singletracks – think of it as a public service!

You should come up to VT and ride our trails! Just check the Doppler before venturing out. We are having a pretty rainy season so far. I don’t mind mud, but I don’t like riding in the swamps that taking over our local spots due to the rainfall.

Great post, there are so many trails out there that are closed or just forgotten about. Sounds like your trip was pretty intresting I have never been on such a lackluster voyage. Its always fun to discover new dirt, but being let down sucks.

You can always come back to Colorado, Jeff… 😉

That sounds like a lot of my voyages, I cant begin to tell you how many trails Ive set off on in hopes of putting together a decent trail report and getting lots of great photos only to ride a few hundred yards to be shut down for one reason or another, so true! But this wandering around the country has led to some of my coolest trail discoveries too, The west fork trail in Oakridge, Or was just a trail leading out of the campground I stayed at. the 8 Mile trail in Hood River, Or was a singletrack that took off from a dirt road I was killing time on, same with several trails around Truckee/Tahoe.

You’ll never know unless you go. 🙂

[…] month I wrote about a somewhat disappointing MTB trail recon trip to middle Georgia and I actually got a lot of sympathy (though that wasn’t my intent at all). […]