Last week Greg and I were in Colorado where we hooked up with Corey (maddslacker) for a couple of classic Front Range rides, and as usual, we had a blast! Fair warning: the Singletracks blog is going to be heavy on Colorado and western US ride reports this summer so if you’re the jealous type, stop reading now and check back in the fall. 🙂

According to the Singletracks trail ranking computer, Buffalo Creek is the #1 mountain bike trail in the world and to me, that’s just proof the software knows what it’s doing. Yeah, yeah I know, there’s probably a trail out there you like better or you’re convinced it’s impossible to pick the best trail in the world. On both points, I don’t disagree. But the fact is, Buffalo Creek is one of those places that has something just about every mountain biker will enjoy and that’s what makes it special. 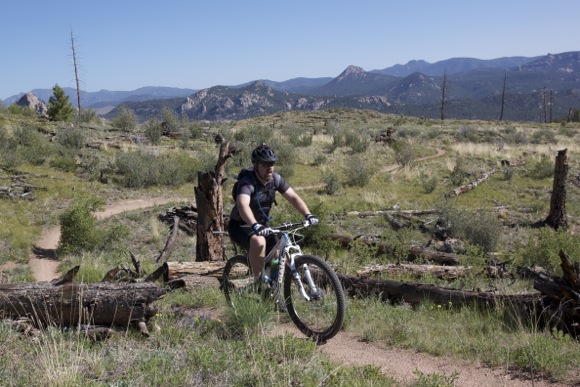 Corey, Greg, and I parked at the trailhead just off the highway in Pine, CO and got on the trail around 9am. The sun was already in full force but the dry air felt cool once we were rolling up the gradual dirt road climb. After about a mile or so we took a left onto the Shinglemill singletrack and climbed through a large burned area toward the junction with the Colorado trail.

It had been about 8 years since I’d ridden at Buffalo Creek and I was amazed at how well the land has healed. This area was burned in the 1996 Buffalo Creek fire and now, 16 years later, the aspen are returning and most of the bushes and trees are above my head. Still, the landscape is very exposed and I could feel my skin starting to turn pink as we mashed up the hill. 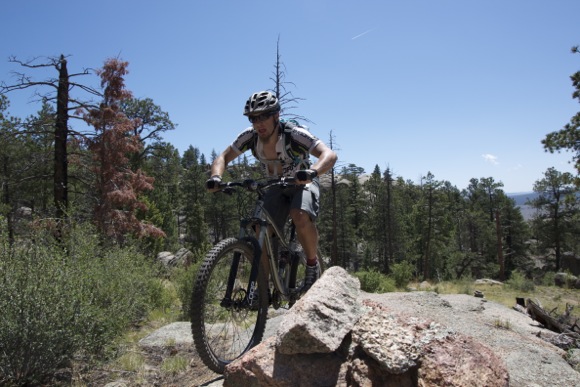 At the top of the climb we dashed down the Morrison Creek trail and re-joined the dirt road. Next we tackled the Baldy trail which was a real lung-busting climb for me, especially on my 1×9. After a few short rest stops we hit the top and the intersection with Gashouse where we debated about our next move. Greg and I really wanted to ride the newest Buffalo Creek trail, Blackjack, but none of us knew how to get there. We had a feeling the trail was somewhere near Charlie’s Cutoff (previously the only technical trail in the whole area) so we followed Miller Gulch to Charlie’s.

Less than halfway down Charlie’s Greg looked at a map on his phone and realized we could get to Blackjack via Homestead so we backtracked to Homestead and eventually ran into Raspberry Jack, the lead-in for Blackjack.

I’m not gonna lie: I was not prepared for the Raspberry Jack trail. From Homestead this trail climbs pretty steadily and throws in rocky, technical challenges one after another. We were all able to ride most of Raspberry Jack with a few pushes and hike-a-bikes, eventually leading us to the Blackjack trail.

Now, I thought Raspberry Jack was pretty rowdy but Blackjack takes things to a whole other level. And it’s even more surprising given the level of technical difficulty of the surrounding trails. If Buffalo Creek is a 1 on the technical scale, parts of Blackjack are a 10. Fortunately the gnarliest parts have difficulty ratings posted and sport clever names like “Slot Machine” and “Bad Finger” so you kinda know what you’re getting into. 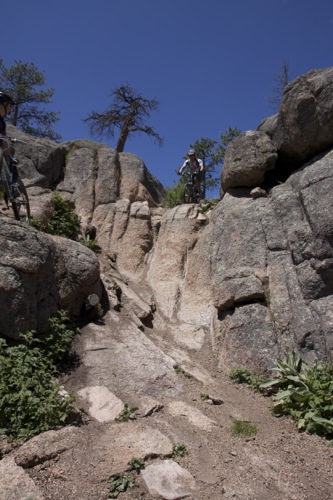 The Slot Machine. Does anyone actually ride this? Absolutely.

Greg was by far the bravest in our group and attempted just about every section. At the Slot Machine I did my best to talk Greg out of his attempt, mainly because I didn’t want to have to carry his ass out if he crashed. On Bad Finger Greg rode down the toughest part then jumped over the handlebars and landed on his feet about halfway down in a cloud of dust. I could barely stand to watch.

By the end of Blackjack I was feeling pretty beat up and frankly a little less confident in my technical skills than when I started. A few of the features had alternate intermediate or beginner lines and even the beginner lines seemed hairy to me.

From Blackjack we made a quick dash down Sandy Wash and it was easily the highlight of the day. The trail was fast with swoopy turns and no pedaling for what seemed like miles. Before I knew it we were back at the car and I was saying my good-byes to Buffalo Creek once again. Hopefully it won’t be another 8 years before I return. 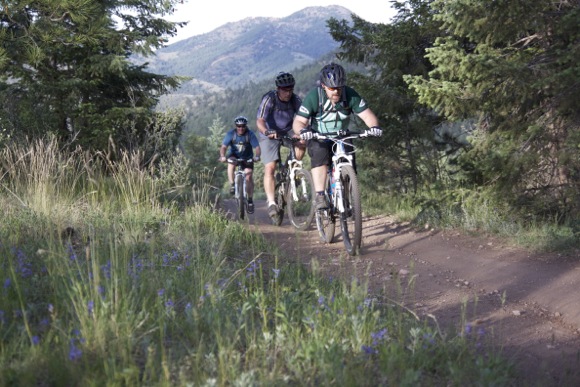 On Friday we set up a Singletracks group ride at Lair O’ the Bear based on Corey’s recommendo and it was a great pick! I had never ridden at LOTB so I was stoked to see what this trail had to offer.

We ended up with six riders in our group and hit the trail at around 6pm. The first mile was fairly flat and easy so we all chatted a bit during the warm up for the real climb. For the next two miles the trail climbed about 700 feet with one techy spot where we Greg and I attempted (unsuccessfully) to ride up the slippery rocks. After a short descent and a fairly flat section we made the final push to the summit at the upper parking lot. 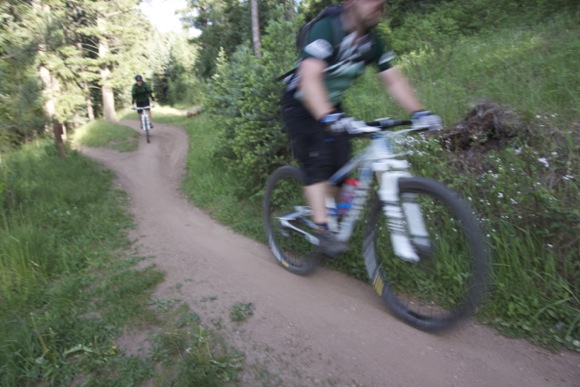 By the time we reached the top the sun was setting which had me a little worried but Corey assured us the way back was MUCH faster than the way in. And he was right–this was an incredible downhill run! At this point in the day we were the last riders on the trail so we didn’t have to worry about any uphill traffic–it was time to rip.

Back at the trailhead I was all smiles from the descent and was kicking myself for not riding this trail sooner. Lair O’ the Bear is definitely on my short list of the best trails near Denver!

I’m still in Colorado for another week so keep watching for more Colorado trail reports. Next stop: Eagle County.

Gear
Never Underestimate the Power of a Good Zip-tie
Progression
Sizing Up or Down Plus Handlebar Widths and Crankarm Lengths:...
Gear
These MTB Deals are Fire, including 40% off Patagonia Dirt...
Gear
The Maxxis Minion DHF Tire is Still the One to...
Subscribe
Login
Please login to comment
19 Comments
Most Voted
Newest Oldest
Inline Feedbacks
View all comments

great write up. wish you had a pic of the bad finger attempt though.

I didn’t get the crash itself but here’s a pic of Greg just before he hopped over his bars on Bad Finger: http://www.singletracks.com/mountain-bike/photo.php?photoID=41935

Who is that fat guy riding my bike? 😀

These are two trails that I never get tired of. Some of the guys in the club I ride with nail all those features on Blackjack, but I just don’t have the nerve to try them. I’ll check out the full length of Raspberry Ridge next time I’m there though, it was a lot of fun.

[quote=”Trek7k”]Fair warning: the Singletracks blog is going to be heavy on Colorado and western US ride reports this summer so if you’re the jealous type, stop reading now and check back in the fall. :)[/quote]

Keep em coming! I’m living vicariously through everyone here (stupid broken bones) so the more write-ups and the more pics, the better!

The Slot Machine looks crazy steep, even in the picture!

Here’s a video of some guys dropping stuff at Blackjack:

Yeah, that video of Slot Machine just doesn’t do it justice – much steeper and taller in person.

Yeah somewhere I saw one that films from the bottom and it’s a better angle to see how big it really is.

When I watch that video, I feel like a wuss for walking it.

great write up. looks like you guys are having a great time shredding the trails out west. the slot machine is an awesome feature. bad finger looks hairy too. another reason why we should give mtbgreg a differant icon. enjoy your alls trip and be safe.

Loving it!. Blackjack sounds and from the looks of the video is my kinda trail. Dream of mine to make it out there one day to spend some time riding. Thanks for sharing!

Great story. If you go to YouTube (sorry don’t know how to add in video), look up Buffalo Creek blackjack trail by wheatridgecylery. It shows the slot machine from a few views and shows someone dropping off the ridge to the left of where most people do it.

The Slot Machine from the Vimeo video didn’t look anything like the photo. The video wmhayes1978 was very interesting. It provided some background info on the Blackjack trail and had multiple angles of the Slot Machine and other features. Definitely worth the 5 and a half minutes.

Both of these trails were such great rides! Thanks for the good times guys!

Yeah the thing with slot machine is that it is one of the first features on the trail and also one of the biggest. I really do think that after practicing up on all of the other features I would have been able to shred the slot machine in style. Of course, it’s easy to say that now! 😀

Will the singletracks crew ride anywhere near the Tahoe region this summer? Also, this post inspired me to take a trip and meet up with my buddy in Denver early September.

Great write up. Buffalo Creek is on my list of trail systems to ride and being I am only a couple of hours away, I need to get there!

Have a great time while your out here visiting our great state!

@trek7k, thx for the link. it looks intense but i’m sure the picture doesn’t quite do it justice.

Great report. I’d love to ride there again.
I’ve tried to ride some sections of Black Jack last year. That was my longest hike-a-bike yet 🙂 Raspberry Jack was a pure blast.
Keep us updated about new rides. Have fun 🙂

Wish I would have had time to meet with you guys! Next time for sure!

Thanks for the write up. I am actually riding this trail tomorrow. I have had the last week off, and was out everyday riding someplace new.