As the morning sunlight of our last day crested the mountain peaks near our campground outside of Crested Butte, CO, we knew that there were a ton of trails that we still wanted to ride, and that there was no possible way we could experience them all. Nevertheless, we had to try!

We decided to try to tackle a number of the trails closer to town, since our legs were way too beat to attempt another epic high-altitude alpine route.

We drove into town and parked at one of the large public parking lots. But then we realized something: instead of riding up the bike path to the town of Mount Crested Butte, we could hop the free shuttle bus and get ~700 vertical feet for free! As an added bonus, the bus showed up less than 5 minutes after we unloaded our bikes. Score!

We ended up riding the shuttle twice, hitting an entirely different set of trails each time. For riders coming from lower elevations that want to ease into the high-altitude riding, for those that just can’t handle the massive climbs, or for riders like us who are just running on fumes after an epic week of riding, I highly recommend utilizing this free shuttle bus to get some free vertical.

After unloading our bikes, we rode down through the mountain village and dropped into the singletrack of the Upper Loop trails. This trail system runs along the flanks of the backside of Mount Crested Butte. If you drive into town and look at the massive cliffs on the back of the mountain, drop your gaze just below the cliffs and scree field to the trees, and you’ve found this small network of gorgeous singletrack. With several different trails branching off of the main trunk that drop down into town, this area is super easy to access from anywhere in Crested Butte or the Village of Mount Crested Butte.

Unlikethe Lower Loop, its easily-accessible singletrack counterpart to the west of Crested Butte, the Upper Loop has some pretty significant elevation changes and a number of rough, rocky sections. While the rocks were challenging at times, we didn’t come across any seriously gnarly features on the trails we rode. Still, the rough sections were delightfully rocky and were a great change of pace from the predominantly smooth singletrack in the area. 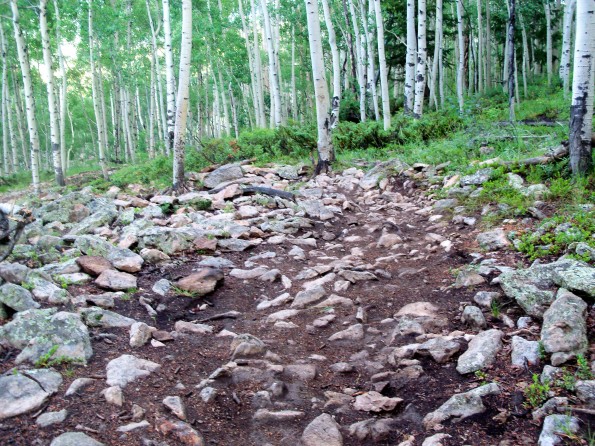 But don’t get the wrong idea: the Upper Loop is anything but a continuous rocky gnar-fest. Much of the trail still looked like this: 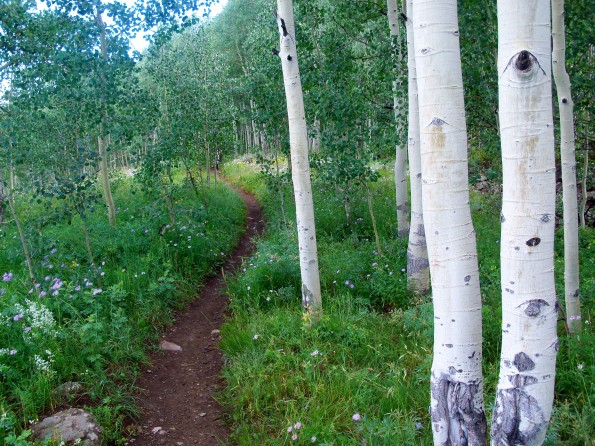 As you can see, this convenient trail system just east of Crested Butte offers up a true variety package of mountain biking delight. If I lived here in town, I could see this being a regular test loop whenever I got a new bike in for review. 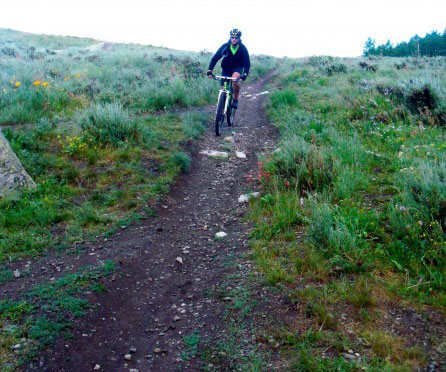 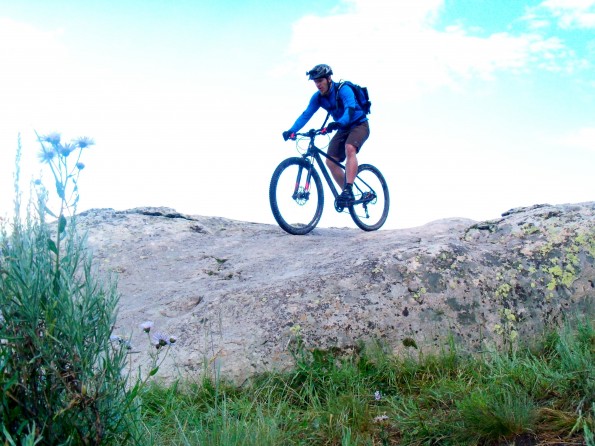 We took the Whetstone Vista trail down from the main traverse, and if any cross-country trail that we rode this weekend was rocky, Whetstone Vista was it! It was a cascading chunder-field dropping all the way down to the bottom of the valley below. It was nothing that I couldn’t handle on my hardtail 29er, but it was definitely a rough ride! 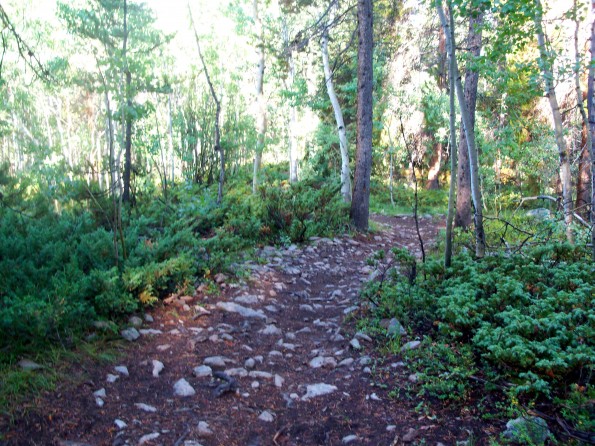 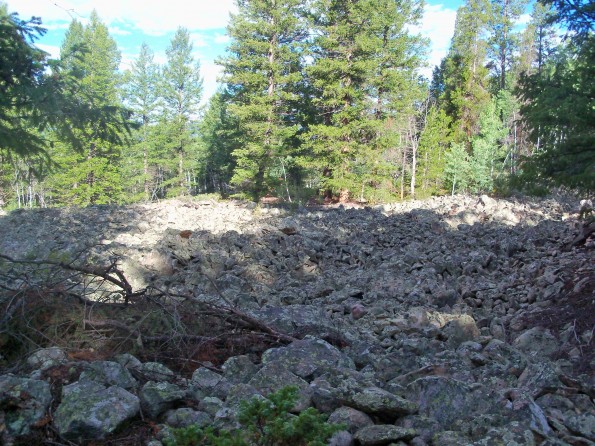 Rocks on the side of the Whetstone Vista Trail. Just imagine how much rock had to be removed in order to build this trail!

After popping out on the gravel road, we pedaled back up towards the highway, and jumped on the New Deli Trail to head back into town. Surprisingly, New Deli was actually a nice singletrack trail that roughly parallels the highway and leads right back into the town of Crested Butte, dropping out behind the public school. From the map, I thought it would be a paved greenway-affair, but I was pleasantly surprised.

Thanks to the wonderful shuttle bus (did I mention it’s free?), our elevation profile ended up looking like this (not including the New Deli Trail):

After our second ride up the shuttle bus, we still had a fair amount of climbing to reach our desired trail. While we didn’t really want to gain elevation on our own (yes, we were getting a litle bit lazy), our destination was so worthwhile! 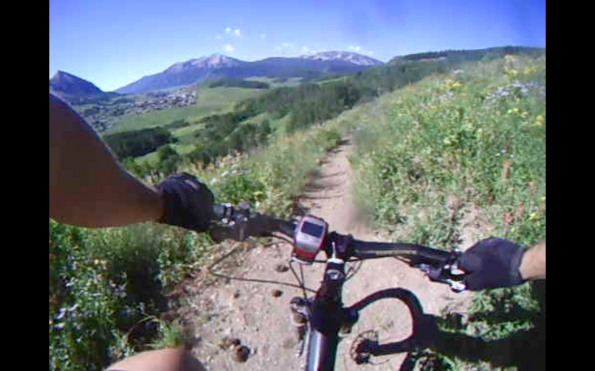 Dropping into the Snodgrass trail.

Snodgrass is a close-to-town Crested Butte classic! The trail is very buff and just flows down through the thick aspen forest with perfectly-shaped turns and the tackiest black dirt you may ever set tire on!

After wrapping up the way-too-short descent on Snodgrass, we pedaled down the pavement for a few miles and hooked up with the brand-new Lupine Trail.

As of early August when we rode it, the Lupine Trail was so new that it wasn’t on any of the maps… even the most recently printed ones from earlier in the year. Instead of carved wood signs, Lupine featured sticks propped up between rocks with laminated computer paper taped to them for marking signs. If any trail was ever brand-spanking-new, it was Lupine this past August!

The top of Lupine begins in a subdivision cul-de-sac, and as such there is no parking available at the top. There are a few spots marked out at the bottom of the trail, so you could possibly park there and ride it as an out-and-back, ride up the road and drop in from the top, ride from town (since it is only a mile or two from the main parking areas), or you could do a rough variation of our route. 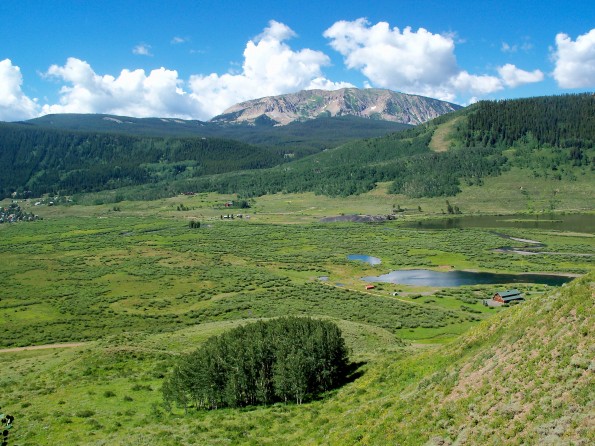 One of the many views off of the Lupine Trail.

The majority of the trail rolls through the meadows on this ridge overlooking town and the Slate river. The singletrack is wonderfully designed with excellent flow, while also offering some serious exposure to keep you on your toes: 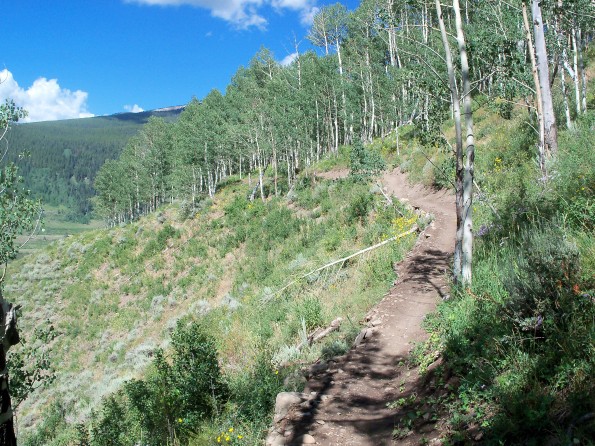 After this section of trail emerges from the trees on the other side, it feeds into an open meadow for the final descent, and the character of the trail completely changes! The flow is still there, but it’s provided by a series of massive, swooping turns with some serious berms to rail. There are numerous berms as the trail snakes down the ridge-side, allowing you to ride balls-out and shred as fast as you can!

The only complaint I could possibly have about Lupine is that the very end of the trail is a buzz-kill. Before you reach the bottom, the singletrack drops out onto an old gravel road, and as you finish the descent you have to dismount, open, and close (make sure you do this last part) three separate gates. Still, with everything that came before, it’s hard to fault this trail for having a lackluster ending.

Stay tuned for the final ride-report from my trip to Crested Butte: Strand Hill.

That view from Lupine is jaw dropping – great pic! If only all of us had such accessible singletrack right outside our doors…

Yeah I know, I wish! If you’re looking at the lupine view pick, the buildings in the distance on the left hand side are right on the west side of Crested Butte. It’s so close, it’s not funny!

Great scenery pics does anyone know the what the window is in crested butte to ride the higher elevation trails without having snow on them?

Has to be too late now. At that altitude I’d guess early October. When I was there for the Fat Tire Fest 5 years ago usually it’s a toss up whether all the trails are open by then due to snow, late June. July-September are best.
Didn’t have the suttle when I was there, unless was just uneducated.
Telluride has a free ski lift from town to Mountain Village much of the summer.
Thanks for the info on the new trail, sounds like it’s almost time to return.

Snowmass has a great, free bus shuttle one can take advantage of for both Rim and Government Trails.

lots of people pissed that someone built a pirate trail off lupine. Eventually they are going to extend the trail so you don’t have to ride road to lower loop! well see if that happens now. the lupine trail is on some privet land and homeowners are angry with this pirate trail!

its about to snow out right now, but most of the trails are now covered with snow as of last week! it all depends on the season this year we had really nice weather. in general i would say early to mid October!

@GimmeAraise, that’s unfortunate. If people are nice enough to let 1 trail be built on their private land, you’d think that everyone else could just be happy with that. Annoying. Hopefully it doesn’t result in the loss of the new trail.

A trail over to the Lower Loop would be excellent! And what you REALLY need is a trail just going up and over that ridge to connect to the bottom of snodgrass. As the crow flies it isn’t far away at all, but right now you have to loop way around and down the road and the end of the ridge and then climb back up to link those trails together. A short connector up and over the ridge would be incredible!

Great photos and write up. Thank you.