This is part two in a three-part series exploring mountain bike trails that are under threat of closure in Montana due to Wilderness litigation. Read part one and two.

Following our rides in the Lionhead we took our time wandering through Yellowstone National Park and then over toward our next destination just south of Red Lodge Montana via the Beartooth Highway. We ended up getting a campsite at the Greenough campground just north of Beartooth Pass.

Sharon, Kevin, and I had the privilege of riding the Line Creek Plateau which is also known as Beartooth Plateau. By the end, we all agreed it was one of the preeminent alpine riding experiences we’ve had worldwide (and we’ve ridden many places).

At 27km long, the trail spends the bulk of its time between 3,050m and 2,850m on high alpine tundra. The last 8km descends the flanks of Mt. Maurice via wonderfully benchcut singletrack with some impressive shark-toothed waterbars.

Line Creek is relatively easy to access as one can drive right to the trailhead. However, not many mountain bikers ride here.

One reason few riders make the trip is due to the exceptionally short riding season; the trail only melts out in late June/early July and frequently receives snowfall in mid September. Because the trail is located on a high alpine plateau, weather can come in quickly and without much warning. Without any shelter, trapped parties will be in big trouble. Travel quickly, be aware of where you are, and consider the limited exit possibilities. 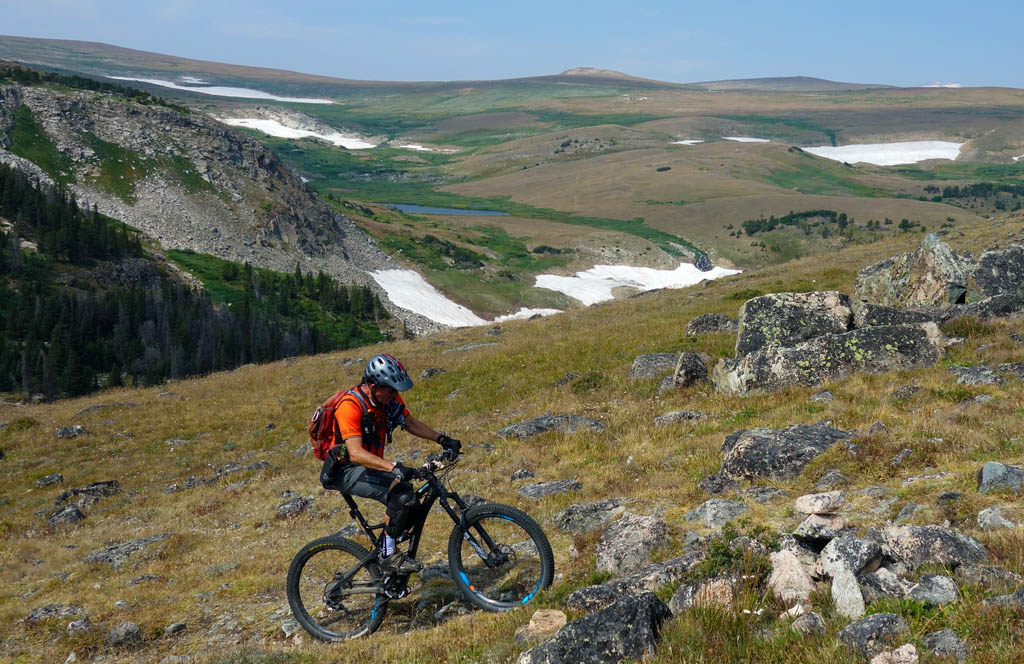 Route finding on Line Creek can be best described as “it depends.” There simply aren’t many trail users at this elevation. Cairns do mark the route but in places the singletrack is faint and tough to spot. If anything, the trails become more defined as the season wears on.

I suspect it would be an even more challenging route finding exercise if there was still substantial alpine snow on the trail. There are quite a few hiking and horsepacking trails wandering off the main route (the USFS map describes it here) as well as game and stock trails, so don’t be distracted. If in doubt, look at your map. The only key junction which may be an issue is the Corral Creek turnoff which cuts out a chunk of alpine riding and drops off prematurely from the ridgeline. 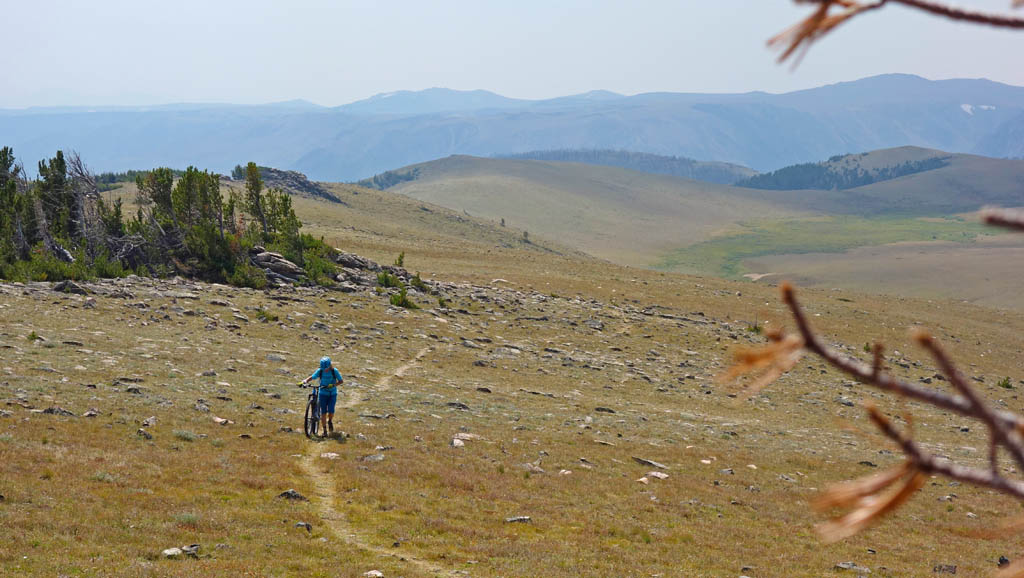 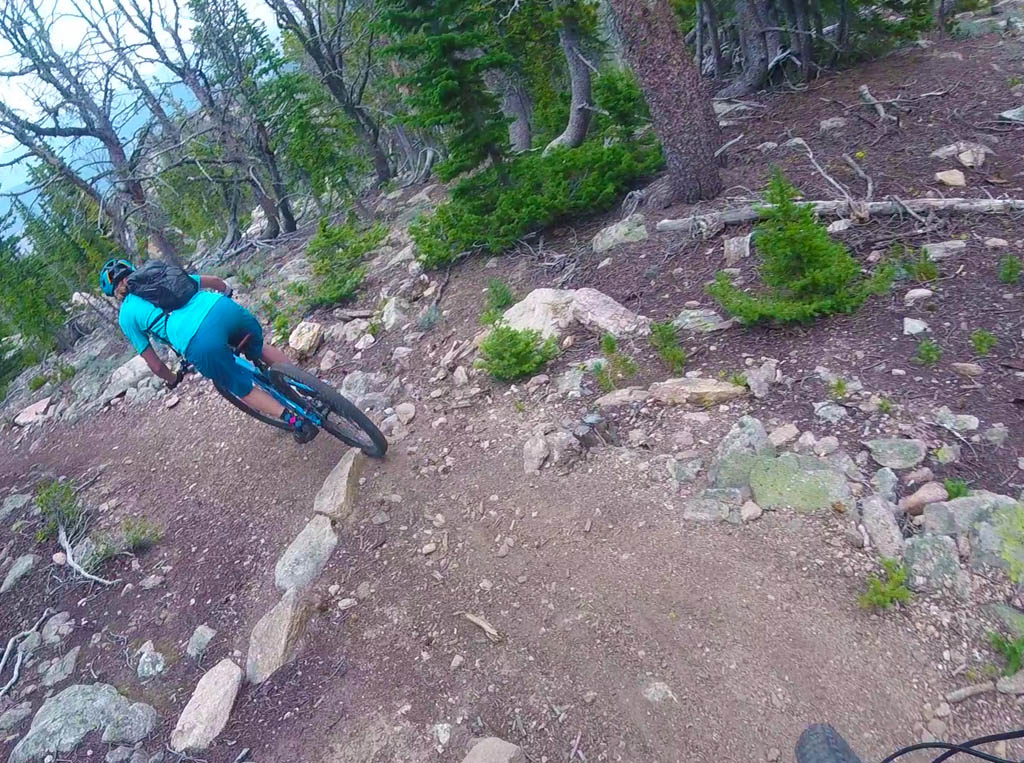 Sadly the Wilderness movement is lobbying to have a chunk of Line Creek moved to Wilderness Study designation in an effort to expand the Absaroka-Beartooth Wilderness. This particular Wilderness initiative would be aimed at the Beartooth Ranger District which is part of US Forest Service Region 1. As previously detailed in part 2 of this series, USFS Region 1 is a captured thrall of the Wilderness movement; they seem willing to sacrifice mountain biking and turn turtle at the slightest hint of litigation.

Therefore, relish the Line Creek experience on your bike (respectfully) while you can. One day there could very well be a ranger at the trailhead telling you that your bikes are forbidden.

Until then, enjoy one of the continent’s preeminent continuous singletrack mountain biking experiences. 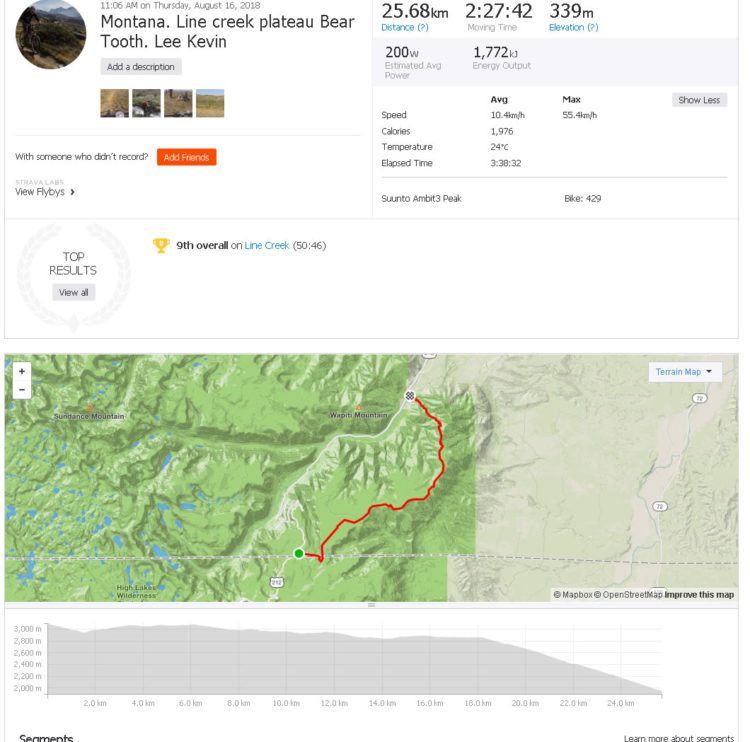 Tucked away in the Big Snowy Mountain Range near Lewiston, Montana the Ice Caves route isn’t long, doesn’t involve a huge death march, and isn’t entirely in the alpine. It is, however, a gem combining a sequence of various geological features linked by a climbable singletrack ascent followed by an entertaining, loose, exposed, and narrow descent. It’s a high-quality trail in its own right and is further uniquely defined by running close to two year-round ice caves.

The Big Snowy mountains rise only 700-800m above the surrounding high valley plateau. These mountains are a classic Montana “island range” (ie one that extrudes at seemingly random points probably as a combination of tectonic activity plus differential erosive forces). However, their semi-circular cirque arrangement capped by ridges protruding from their natural amphitheater affords superlative views.

This ride is another Montana alpine classic facing closure as it has the double headed black mamba misfortune of being in a Wilderness Study Area while being proposed for Recommended Wilderness. Enjoy it while you can!

The Ice Caves route is just 19.3km long with 797m of elevation gain. Options exist to extend it by turning off after the climb to the top of the flat plateau at 2,650m, proceeding east along Knifeblade Ridge (it’s actually quite wide), followed by a meander along the ridgeline toward Greathouse Peak. This adds more views, distance, and perhaps a tad more climbing.

The US Forest Service has clearcut the Crystal Lake Campground and base area for forest maintenance purposes so the trailhead is somewhat blocked by fallen trees. You start off with doubletrack beside the campground bathrooms which then becomes climbing singletrack next to the lake. Junctions are well-marked with the climb up the Grandview trail signed. Plod your way up to the east-west ridgeline view. 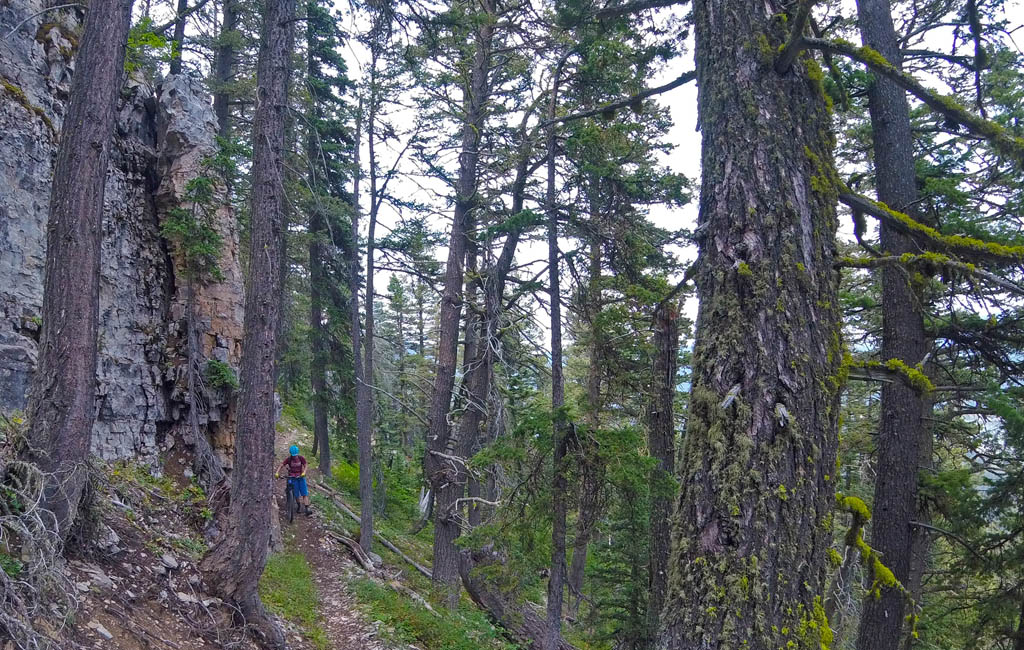 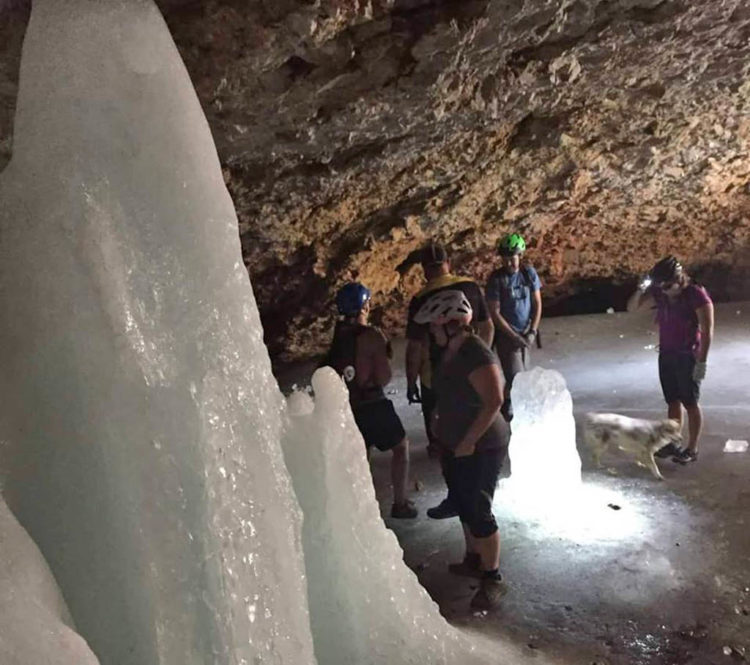 Photo from the Montana Mountain Bike Alliance. Unfortunately when we got to the Ice Caves the permanent ice features had dwindled in the summer heat and were less impressive-looking.

For some 2km or so past the marked Ice Caves turnoff, riders meander through the beginnings of subalpine terrain, but the trail gently descends again to pine forest where the junction toward Knifeblade Ridge is marked as 493 or “Greathouse.” From there riders can do an out-and-back ridgeline meander.

This is also the payoff of the “Ice Caves” aka Uhlhorn descent. It’s tight, it’s loose, and in sections it’s exposed with scree sections. The descent is fast but not too fast. It’s loose but not too loose. It’s twisty and turny but not too janky. In short, you’ll probably have a better-than-average time with the only downside being that the descent demands a significant amount of concentration. I suggest stopping every now and then to take in the sublime views.

Maps for the area can be tricky to find since there are so many names demarcating this site (Big Snowy, Ice Caves, Grand View). Instead, just look for the Crystal Lake area trail maps which show the possibilities. 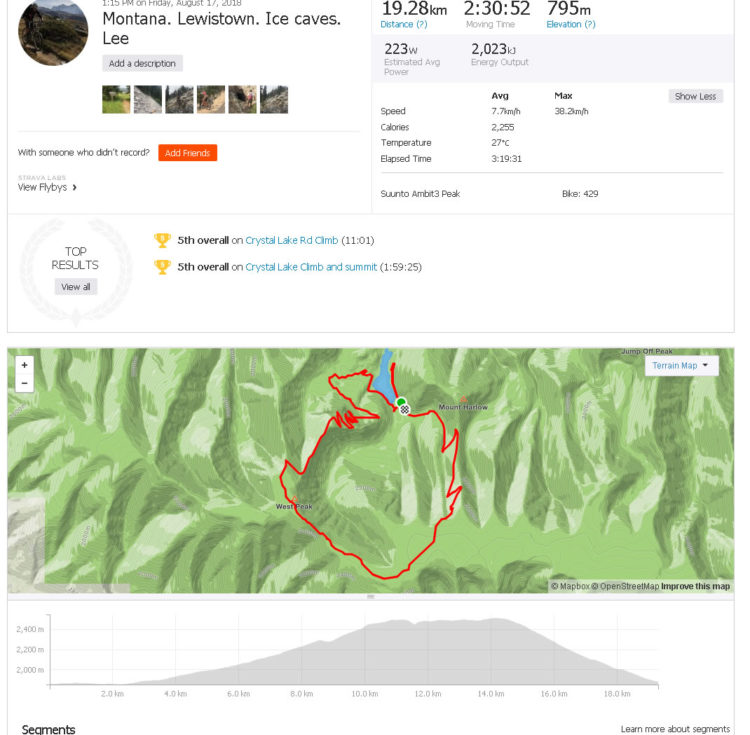 The Big Snowy / Grandview / Ice Caves route is administered by the Helena-Lewis and Clark National Forest. This arm of the US Forest Service is (sadly) part of US Forest Service Region 1. This is the same USFS region which seems to cave in to the Wilderness movement at the drop of a hat. Unfortunately the Helena-Lewis and Clark unit has proposed travel plan revisions which could affect mountain bikers. One of the options in this plan is to expand Recommended Wilderness Areas and Wilderness Study Areas to encompass the Ice Caves route. If that plan is approved, it will mean that this ride will be forbidden for mountain biking.

The twist in the Helena-Lewis and Clark National Forest travel plan proposal is that it lays the groundwork for prohibiting mountain biking not just in the quasi-wildernesses of RWAs and WSAs, but also in IRAs (Inventoried Roadless Areas).

Now one might say, who cares what bureaucratic alphabet soup reason is dreamed up for the US Forest Service to prohibit mountain biking? A ban is a ban by any other name.

However, it’s an interesting legal twist dreamed up the US Forest Service planning drones. With this, a US Forest Service bureaucrat may be able to designate public land as either IRA, WSA, or RWA and argue that these are quasi-wilderness lands which may one day in the future grow up to become Wilderness. Triple layering a trail into RWA, WSA, and/or IRA status therefore opens up three potential ways for bikes to be banned in the interim.

Kevin Loomis of the San Diego Mountain Bike Association is confident mountain bikers may eventually turn the tide by speaking up and letting bureaucrats and politicians know we are engaged. He says, “by uniting and showing a strong community, they [will be] forced to speak with us.”

Loomis notes that “riders love wilderness and invest their sweat, blood and muscles proving this over and over.” Through our actions, we can also potentially influence future policy.

Some general thoughts on road-tripping Montana

You know how how you look at awesome places to explore on a bike and you think “One day I’ll get there. It ain’t going nowhere.” That isn’t the case in Montana where insanely beautiful alpine rides could easily be prohibited for mountain bikers in short order.

Our trip was designed to check the best trails off our list before they are closed to bikes. It meant the driving-to-biking ratio was more than I normally would want. But high quality alpine rides are rare beasts. It stands to reason that they’re spread out.

With that in mind, here are some general observations on Montana mountain bike road tripping.

Because Montana is so big I wouldn’t do a trip like this again in a hurry. Instead I’d focus on a single region or close-together regions. The last time we were here we focused on Bozeman area rides.  The next time I’m inclined to check out more of the Hamilton/Darby Bitterroots area (although watch out for Sheriff Larry Rose grrr.) There’s still a ton of legal riding in the Bitterroots especially around Hamilton, Lake Como, and Warm Springs/Sula. There’s also quite a bit of alpine riding in the area even with the Forest Service closures litigated by the Wilderness movement. The Lost Trail Bike Fest looks like it would be a blast.

Alternatively there’s room for exploration centered around the Lionhead and Centennials as a central point. Or Whitefish. Or Helena proper. Or the Bridgers. Montana is a big, big state with lots of room, lots of trails, and not many people. Hopefully this three-parter whets the appetite, doesn’t discourage one too much, and encourages people to treasure and lobby to preserve what they have.

Singletracks
Get Ready for a Bikepacking Adventure with these Gear Picks
Gear
What is 'Too Heavy' for a Mountain Bike?
Opinion
One Less Mountain Bike: A Tale of Too Many Stolen...
Trails
Crushed by Crosier: Searching for Singletrack in Estes Park, Colorado