While many places in the nation are constantly building new singletrack, it’s not every day that a new trail system is born. I was already in Moab exploring other brand-new singletrack trails when I got wind of a new loop of trail that had just opened as stage one of an all-new trail system: Navajo Rocks. 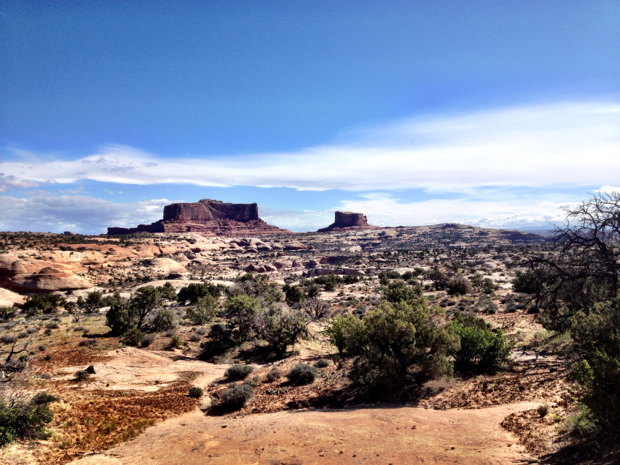 At the time, simply finding the start of the trail was an involved affair. Since A) it wasn’t yet listed in the Singletracks database and B) there wasn’t any major signage to denote the beginning of the trail, aside from a small trail post located about 50 yards off the highway, I drove past the trailhead several times before I finally figured out where to park. Yeah, you’re welcome: now you can just pull up directions in your smartphone using the Singletracks mobile app, and you can skip the headache!

For my inaugural ride at Navajo Rocks, only phase 1 of the trail system had been opened, which consists of a 9-mile loop. Another loop is already planned, and who knows how large this system will grow to be? 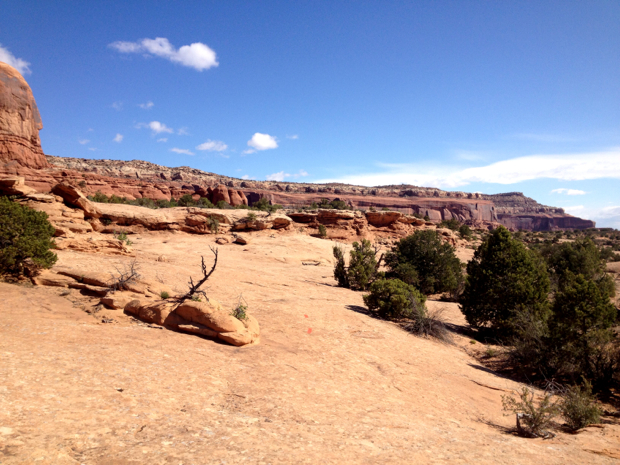 I began my ride on the Ramblin’ Trail, which rambled along over fields of slickrock and onto still-soft singletrack waiting for the passage of thousands of mountain bike pilgrims to pack it in.

While the views were respectable off the Ramblin’ trail, they weren’t spectacular in the Moab scheme of things. However, the beauty along this trail is found in the smaller desert formations: 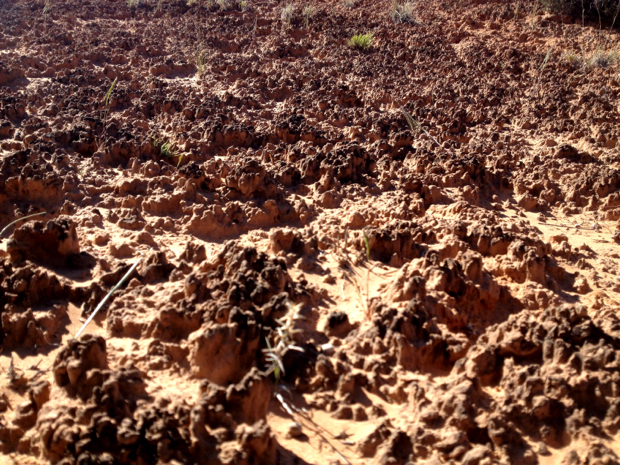 Namely, cryptobiotic soil. Also referred to as “biological soil crusts,” these crusts “are communities of living organisms on the soil surface in arid- and semi-arid ecosystems,” according to Wikipedia. “They are found throughout the world with varying species composition and cover depending on topography, soil characteristics, climate, plant community, microhabitats, and disturbance regimes. Biological soil crusts perform important ecological roles including carbon fixation, nitrogen fixation, soil stabilization, alter soil albedo and water relations, and affect germination and nutrient levels in vascular plants.”

The Ramblin’ trail passes through seemingly endless acres of cryptobiotic soil! While I’m not heavily traveled in desert regions, this was the greatest concentration of these soil formations that I’ve ever personally seen.

One quick leave no trace note: I posted a few of these photos back in April, and one user commented something to the effect of: “Man, I would LOVE to rip through that crust!” No matter how fun it looks, please, stay on the trail! Cryptobiotic soil takes, on the conservative end, 20 years to recover from a disturbance. However, these large, well-developed three-dimensional formations in such an arid environment can take over a thousand years to recover from a single tire track! So please, respect the beauty of nature and leave it as it was for someone else to enjoy after you.

After crossing the highway onto the other half of the loop, dubbed the Rocky Tops trail, the scenery changed significantly. As I wound my way through the dry desert scape, I found myself on top of a massive sandstone rim, traversing along under the bottom of cliffs soaring hundreds of feet above my head, and then eventually pedaling to the top of those same cliffs. Yeah, now this is Moab mountain biking! 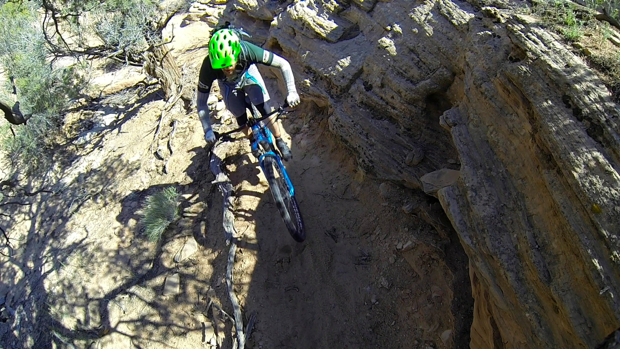 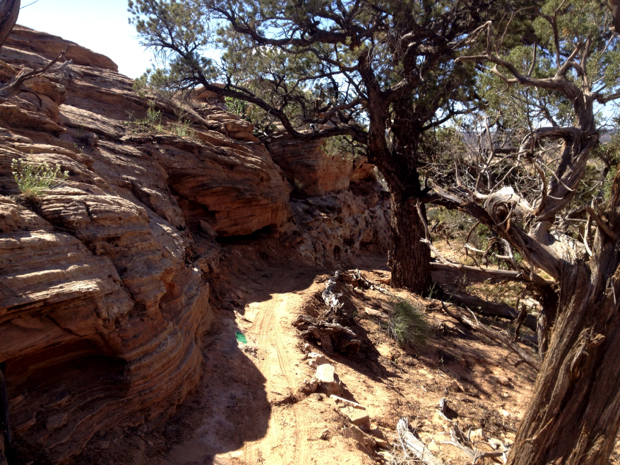 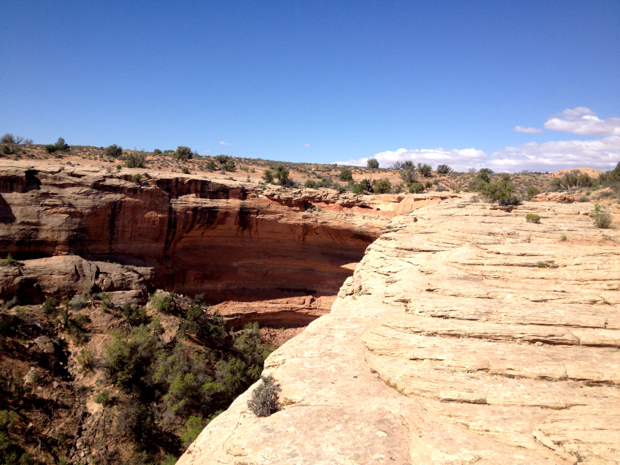 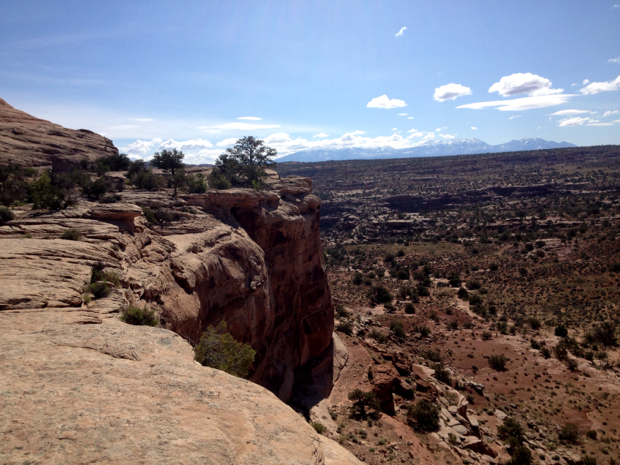 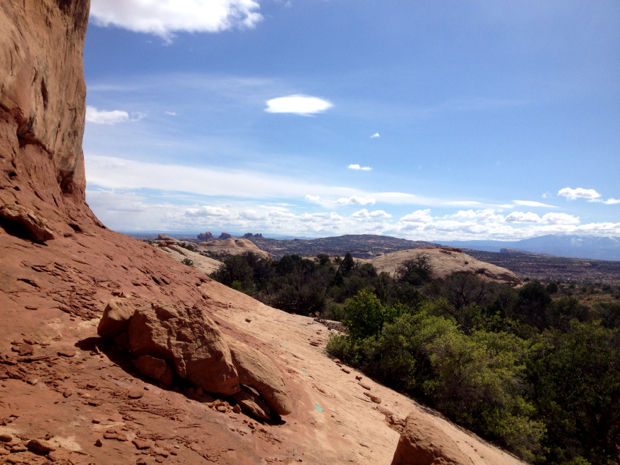 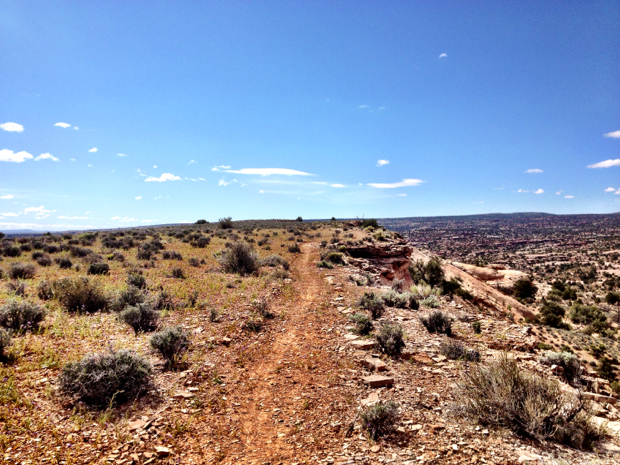 Overall, this loop is quite pedally, and doesn’t have any big climbs or descents. It’s essentially intermediate in difficulty, with one or two tricky sections to keep you on your toes. If you’re coming to Moab and don’t want to ride beginner trails but you also don’t want to die on the gnar, Navajo Rocks is a great choice!

Your Turn: Have you ridden any of the new trails in Moab? What’s your favorite recent addition?

Looks like a lot of fun–yet another reason to go back yet again!
Thanks for the writeup.

Thanks, glad you enjoyed it!

With all that sand, it looks like decent fat bike ride!

Funny, we camped up there for years, before they banned camping in that area. Might have to go check it out again…

I rode this loop two weeks ago and agree that with all of the loose sand it would make a great fat bike ride. The sand should settle in some with time but right now there are several deeper sand pits to be dealt with.