“Winter is for skiing!” I said. “It’s for going downhill on snow!” I taunted. “Take a break from biking!” I urged.

BUT… and you guys all knew there was going to be a “but,” didn’t you?

The snow in the middle of January was horrible, alright? We were tired of skiing hardpack at the local resort, and we sure weren’t wasting our days at Snowmass or Telluride on icy bump runs or skied-out bowls.  So what were we to do with a weekend to spare?  I mean, really… what choice did we have but to go biking?  It was like Mother Nature herself was taunting me.  “Go to Moab Mtbikerchick…go on…you know you want to.” I did want to, darn it. 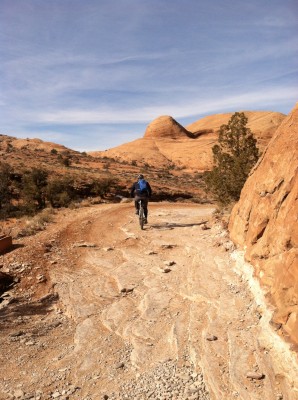 It was going to be in the mid-40s and sunny both Saturday and Sunday in Moab.  There was really no reason not to go, especially with hotel prices around $40/night. I called ahead and talked to the guys at Chile Pepper bikes about some trails that were in decent shape.  It seems like the ones that will dry out and be rideable the fastest during any dry winter spell are Amasa Back and Poison Spider. Slickrock will often be in good shape, too.  The rest… well, it just depends.

My BF was familiar with Poison Spider and agreed that it would be a good one to do with snow still hanging around.  The jeep road portions of that trail are actually sandy, so there was no chance of encountering mud.  I was excited: not only was I biking in winter (gasp!) but also biking a trail I’d never tried before!

Sure, parts of PS are just jeep road, but the parts that are rock are super fun and entertaining.  We had a blast looking for lines down and up some early rock portions, and played around on the slickrock at the “end” of the ride too.  It was a beautiful day, and all we encountered were some jeepers.

We spent about 3 1/2 hours out there; you could spend hours just playing around on the slickrock at the end of the ride. As an out-and-back, I think it was about 12 miles.  You can sort of make this a loop by including the Portal Trail, but it’s discouraged just because the Portal Trail is so exposed and dangerous.  I like the out-and-back because you get to rip down some pretty fun rock sections.

On Sunday we first attempted Slickrock.  The BF says this is one he can usually do in winter, but this time there was just too much snow on some of the northern faces. We’d been getting off our bikes and slipping trying to push up snow-covered slickrock.  That didn’t sound like fun.  Instead, we decided to go check out the Brand Trails. Here’s what I knew:

A few weeks ago the Brand Trails had been too muddy to ride… at least, that’s what I’d heard.  Then last week a couple of ladies in a bike group I follow on Facebook posted some pics from the Circle O and Rockin’ A.  They said the road to get back to the trails was “muddy in places.”  Then Saturday, as we drove by those trails on our way in o town, the road from the parking area to the trails looked absolutely dry.  So on Sunday, we decided to chance it.

Overall, our ride was fine!  However, the singletrack trails like Lazy-EZ, North 40, Bar B, etc. were not rideable.  You could see huge ruts and torn up trail from where people had tried.

Bad riders! Bad! You can tell when it’s too muddy.  Get off!

Anyway, we headed down the Bar M Trail, which was perfectly dry, and then down the Rockin’ A and Circle O trails.  People think these are “easy” trails, but they’ll give you a run for your money, partly because you’re constantly peddling up and over rock; there’s very little coasting. 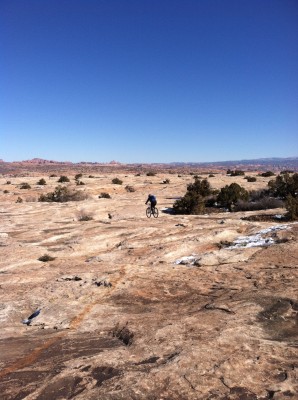 So go ahead.  Give it to me.  I can take it.  Because YES, I did bike in the winter… and I’d do it again if the need arose.  Fortunately, snow is in the forecast for the whole week!  Soon I’ll be back on the slopes schoop schoop schooping my way down the hill on skis.  But it definitely was nice to get out on my bike!

Um, I thought you lived in Colorado. We ride all winter almost every winter here … (The new fat bike just means I don’t have to drive to Pueblo or Canon City) 😀

I don’t like riding on snow and about half the time in the winter our trails are just mud out here in GJ. Plus I love to SKI! I have a spring/summer/fall sport and a winter sport and the two do not often overlap 😉 Still, the biking was awesome in Moab!

I love skiing, but I’m jonesing for some desert singletrack!! Probably won’t be able to make a trip happen until March sometime, and I have it down to either Sedona or Moab. Moab has the appeal of being close, but I have yet to visit Sedona… decisions, decisions!

Go to Sedona. It is a beautiful place and the trails are awesome. Having ridden both places, I like look forward to going back to Sedona the most.

Rub it in JKL 🙂 We’ve all been talking about a trek to AZ but it is a LONG drive, especially with a family. Maybe I should just move there 🙂

My friend Sparky says Sedona should get moved to the top of everyone’s list of places to bike!

Funny, nobody’s ever called me ‘Sparky’ before.

Looks like you had a good time. I plan on riding Moab this summer but we are looking to do the Whole Enchilada & Captain Ahab. Reading this post just made me want to go even more! Nice pics!