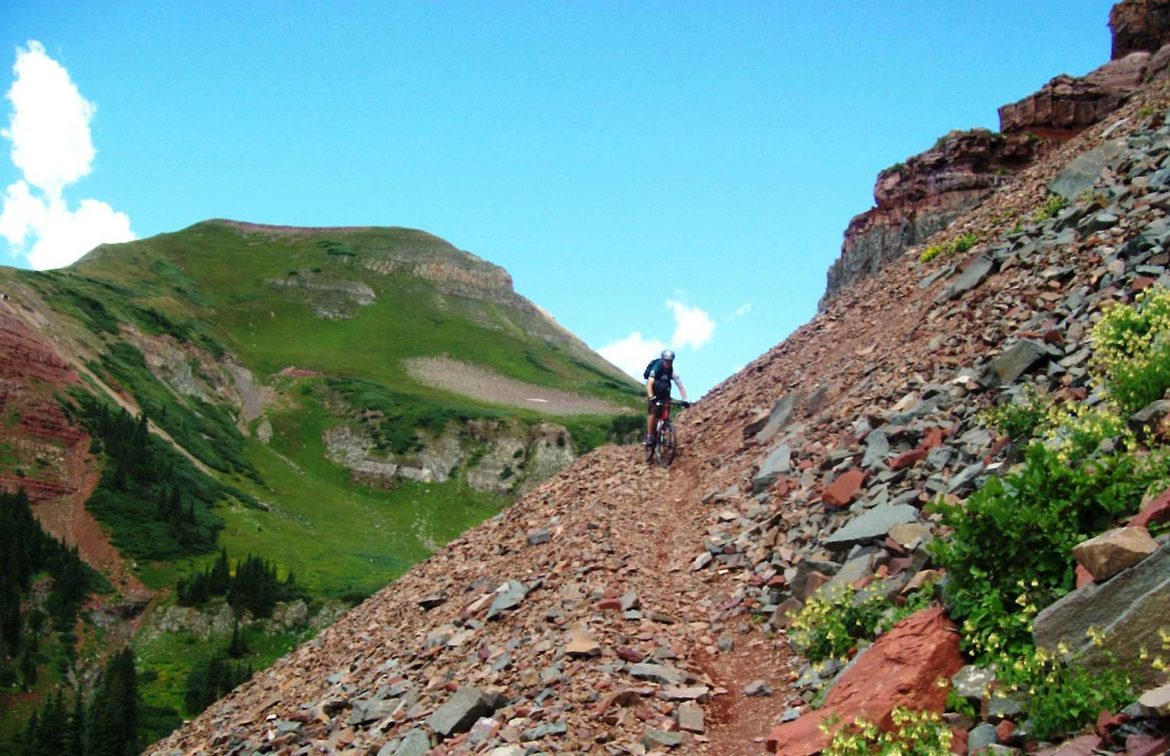 I nearly collided with another rider at an intersection while ripping a flowy single track in Durango, Colorado’s Horse Gulch. We were both dropping into a rutted draw. While I rode down the draw, the other rider caught a kicker and cleanly gapped it on his hardtail.

This is remarkable because on a busy day I might see only a half-dozen riders in several hours of riding. To encounter another cyclist at that exact place and time was a rather chance meeting.

What was unremarkable about this sighting, was that it was U23 World Champion Silver Medalist Chris Blevins. On any given day, you can run into Olympians, world champions, and national champions on Durango’s trails. Chris is among the new generation of cycling stars that continues to make Durango a world class mountain bike destination for recreational and pro riders. As local Ed Zink of Durango’s Mountain Bike Specialists put it, “Durango was not put ‘on’ the cycling map, the cycling map was built around Durango.”

If ever there was a ringleader for cycling in Durango, it is Ed Zink. Among other accolades, he was on the organizing committee for the 1986 and 1987 NORBA Nationals, and helped bring the 1990 UCI World Championships to Durango. According to Ed, “The Iron Horse Bicycle Classic has hosted over 100,000 riders from around the world.  The 1990 UCI sanctioned World Mountain Bike Championships hosted approximately 1,000 international athletes and generated a media tsunami about mountain biking in Durango.  These two competitive events have been part of the catalyst for world class cycling athletes to call Durango home.”

The list of world class cycling athletes is extensive. It has included John Tomac, Greg Herbold, Bob Roll, and Juli Furtado. The new generation of Todd Wells, Howard Grotts, Chris Blevins, Sepp Kuss, and 16-year-old phenomenon Ruth Holcomb are keeping the fire stoked, and raising the bar for everyone. Of course, the spiritual leader of the group, and point of inspiration for many, is Ned Overend.

The folks at Durango DEVO are feeding the incubator of world-class talent. DEVO is a youth development program, with 900 young shredders and a host of coaches. Many of those coaches are retired world-class athletes. Fort Lewis College sits on a mesa overlooking town, where student cycling athletes have in the neighborhood of twenty-something national championship titles.

So what is the secret sauce of Durango’s place in mountain bike infamy? According to Ed Zink, “It really is all of this being located in a friendly town with a cycling culture surrounded by millions of public acres of high desert and alpine mountain terrain. Cycling can occur all year round.” With city and county leadership members who are strong cycling advocates, and with the bomber trail advocacy organization Trails 2000, Durango has built over 300 miles of dedicated singletrack. Couple that with hundreds of miles of forest service road, pack trails, and ORV trails, and you have a lifetime of riding.

It would be entirely possible to come to Durango, park your car for the week, and hit a different trail system each day – if you have the gas for it.

From downtown you have immediate access to 15 named trails and trail systems on the Trail 2000 interactive map. Staying in downtown Durango allows you to hit all major trail systems. You can loop and connect town trails to high alpine rides like Missionary Ridge or the Colorado Trail, which has its southern terminus in Durango.

For trail riding, you want to single out the trails below.  Some of the other trails like the Animas River Trail can be a great connector, and allow a cooling dip on a hot day in the Animas River. To give you a bit of flavor, we asked Trails 2000 executive director Mary Monroe for a brief descriptive of each.

Overend Mountain Park (as in world champion Ned Overend): Aerobic climbs up Ned’s Hill, Hidden Valley, and to the Hogsback. Overend Mountain Park. This area provides a great mix of terrain and skills required. The trail system is also known as “Test Tracks” since many mountain bike innovations were tested, and are still tested, by major manufacturers here.

Animas Mountain: 6.2 miles of trail, with a long climb to the top with stunning views of the Animas Valley. Several expert downhill options, including Merv and Swerv.

Dalla Mountain Park: 10 miles of trail traversing in and out of trees, roots, and rocks alongside a road.

Spurline Trails at Three Springs: A beginner level pump track with 12 miles of trail connecting into BLM, and Horse Gulch.

Colorado Trail at Junction Creek: This is the southern terminus of the Colorado Trail, which travels 500 miles to Denver. The trail offers great climbing, ascending over 5,000 feet within 20 miles. Trails 2000 adopts the longest section of the CT in the entire state.

My favorite? Ride up Horse Gulch’s main trail from downtown. Loop the beginner Meadow Loop and Stacy’s for a warm up. Head up Telegraph, which is a local mountain bike time trail for our competitive riders. Crest the saddle, drop into Sidewinder, ride South Rim for as long as you wish, and descend to the Animas River Trail, which will take you back to town. Jump in the Animas River on a hot day.

In reality, the above is just one favorite. There are too many to mention. Others that come to mind are riding the high alpine Colorado Trail off of Molas Pass, Endlick Mesa Road, Missionary Ridge Trail, and more. Many of these are marked routes that are intertwined with lesser known pack trails, used by horse packers tending to cattle and sheep in the high alpine.

Post ride, hit Carver Brew Company. Do damage to their excellent smoked chicken wings and Cajun mac & cheese, or hit Eolus promptly at 5:00PM for happy hour, and feast on one of the best $10 burgers around. Top off any meal, or any ride, with ice cream at Cream Bean Berry. For a 5-pound-brick-style burrito, hit up the cycling supporters at Zia Taquaria. Do you prefer elegant dining? Primus may serve up the best meal that you’ll ever experience. Feeling wasted? Hit Amaya for a hot tub, ice dip and massage. All are a pleasant walk in downtown.

When we have high output house guests coming from the East Coast we universally recommend April. In a normal to epic snow year it is entirely possible to enjoy a day of spring skiing at Purgatory Ski Resort, 30 minutes and 2,000 feet up the road, and then go mountain biking. If you snow slide in winter, and if you are not burned out by April, that could be your game.

Sometime in July through August, we experience “Monsoon Season.”  That weather pattern will typically bring 15 minutes of torrential rain in the afternoon. If you aspire to ride above timberline, the accompanying lightning storms can make your day very, very sporty.

My favorite time of year is from the end of Monsoon, until snow the hits. The days are universally warm, and nights crisp. Starting in September the aspens turn golden yellow. As fall progresses the oaks of the town trails turn to copper. Tourists have gone home, and it feels like you just may have landed in the most perfect mountain bike destination that exists.

Durango as a destination

Which brings us to the end, or really the beginning. Why isn’t Durango better known as a cycling destination?

It could be that our local visitor’s agency does a great job of communicating with Durangatans (as locals are sometimes known), but can’t seem to crack into a wider audience. While other destinations attend consumer and trade events to spread their gospel, representation of Durango is conspicuously absent.

It could also be that locals like it that way. With 25 percent of the team that represented America at the Mountain Bike World Championships coming from this town of 18,000, perhaps they prefer to let results speak for themselves. These athletes travel all over the world and can live wherever they want. They keep coming back to bed down in Durango.

Finally, Durango is a long way from anywhere. Our nearest interstate highway is hours away, and flights are limited but improving. You don’t end up here by accident – either as a visitor, or as a resident. However, once you are here, from the mountain bike trails, to the Animas River, to the 1.8 million acres San Juan National Forest, there is no lack of stuff to keep you engaged.

Like the porridge in the fable of Goldilocks and the Three Bears, some cycling towns can be too hot, or too cold. Or they can lack authenticity and can be pretentious. Durango, as a cycling destination, is just right regardless if you are rocking enduro mountain bikes, pro-level road bikes, or something in between. No matter what flavor or domain of cycling, all trails lead to Durango.

Marty Grabijas
Marty G is a retired product developer from the outdoor industry, and was a Cat II road racer in a previous life. These days he splits his time between road and mountain, and rides so that he has a license to eat ice cream. He loves puppies.

Videos
Enduro Racing from a Photographer's Eyes [video]
Gear
4 Mountain Bike Saddles, Reviewed for 2020 [Review]
Gear
What is 'Too Heavy' for a Mountain Bike?
Opinion
One Less Mountain Bike: A Tale of Too Many Stolen...