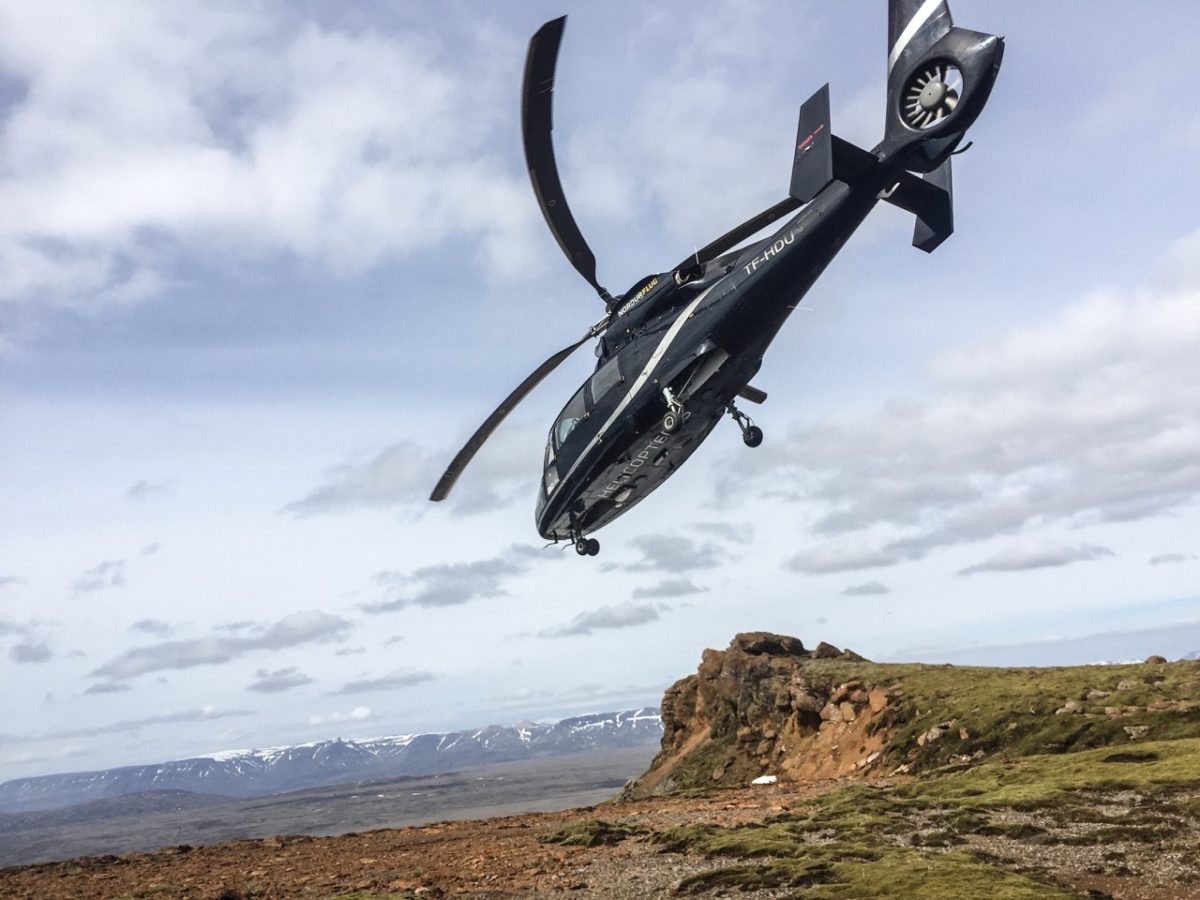 As the helicopter dove off the ridge, it struck me that it should be emblazoned with Red Bull logos, what with the puckering flight that we had just completed, and the drastic maneuver that the pilot employed to exit the ridge. As we ran toward the edge of the precipice, we got a glimpse of the machine swinging through a high-G turn several hundred feet below us. Almost immediately, the chopper was just a speck, traversing the barren, volcanic landscape that makes up much of Iceland.

Magne, the owner of Icebike Adventures, was on board the helicopter, headed to the Super-Jeep, and an eventual meet up with us. But first thing’s first. We were on top of the Hengil Volcano, with a long, technical descent ahead of us. 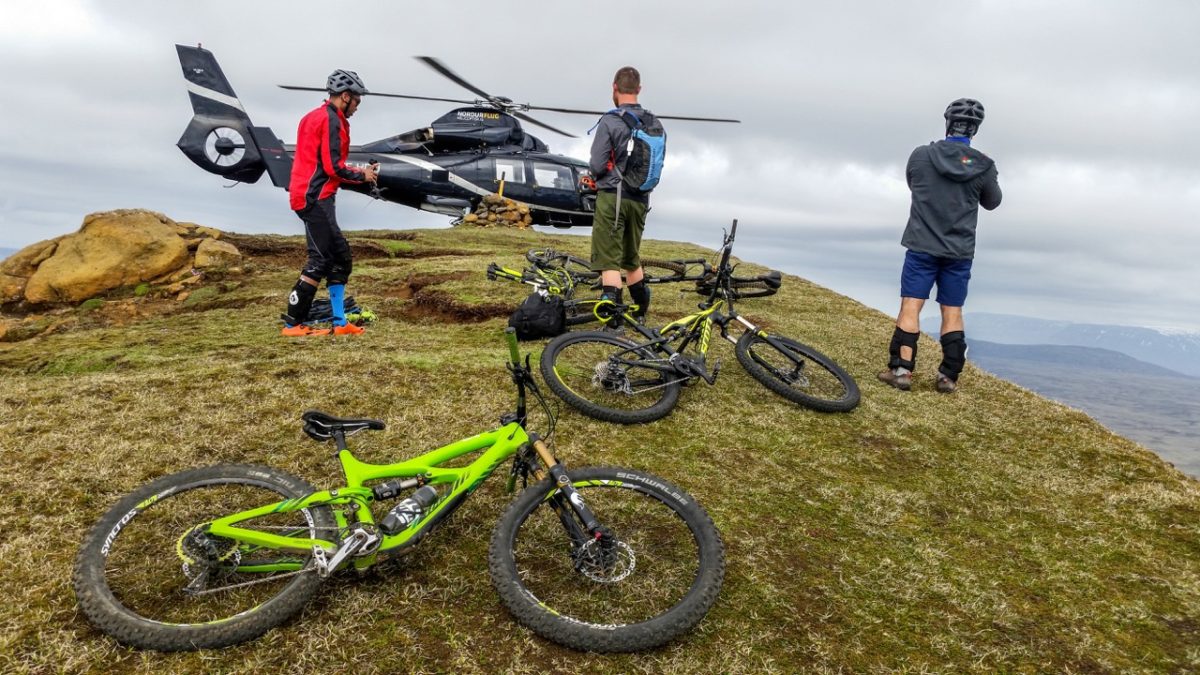 This was day 2 of my solo Iceland mountain biking adventure. I had decided to hook up with Icebike to ensure that I got some good riding in on my trip. I guess it was kind of an insurance policy. You see, I had struggled finding information that I could use to design my own DIY mountain bike trip to Iceland. Mine was a last-minute trip, so I didn’t have time on my side. As I scoured the web for trails to ride, I found a frustrating lack of helpful logistical information.

Going in, I knew as much about Iceland as the next guy. I knew it was the land of Bjork, gushing waterfalls, smoldering volcanoes, Sigur Ros, and expansive landscapes. And, as a mountain-biker, I also knew that it was starting to get some play on social media as an exotic riding destination. Hans Rey, Joey Schusler, and other pros were dazzling us with the images they returned with. But they were traveling on the dime of some big, corporate players in mountain biking. I wanted to see how the ordinary-Joe could swing a mountain biking trip to that emerging adventure travel destination.

Like many mountain bikers, I sort of have an intrepid spirit. I’d rather do it myself than tag along with a group tour. Maybe I’m selfish, but I want to ride the kind of trails that I like, when I want, and not be at the whim of a group of riders that I don’t know. What follows is how I ended up experiencing the amazing riding that Iceland has to offer on a DIY-trip.

I only had five days to ride, and was determined to get the most bang for my buck. However, I was also on vacation in Iceland, so I wanted to see some of this amazing country as well. As a result, I tried to find the right balance of saddle time and car time.

I was able to explore the areas surrounding the capital, Reykjavik, and found some really good trails in that zone. I also ventured out to the southeast corner of the island, and was rewarded with some incredible scenery and adventurous riding. Finally, I made it to Akureyri, in the north of the country. What I found there was an awesome enduro ride that ended in a sweet, north-shore inspired trail that led back to town. Here are the details. 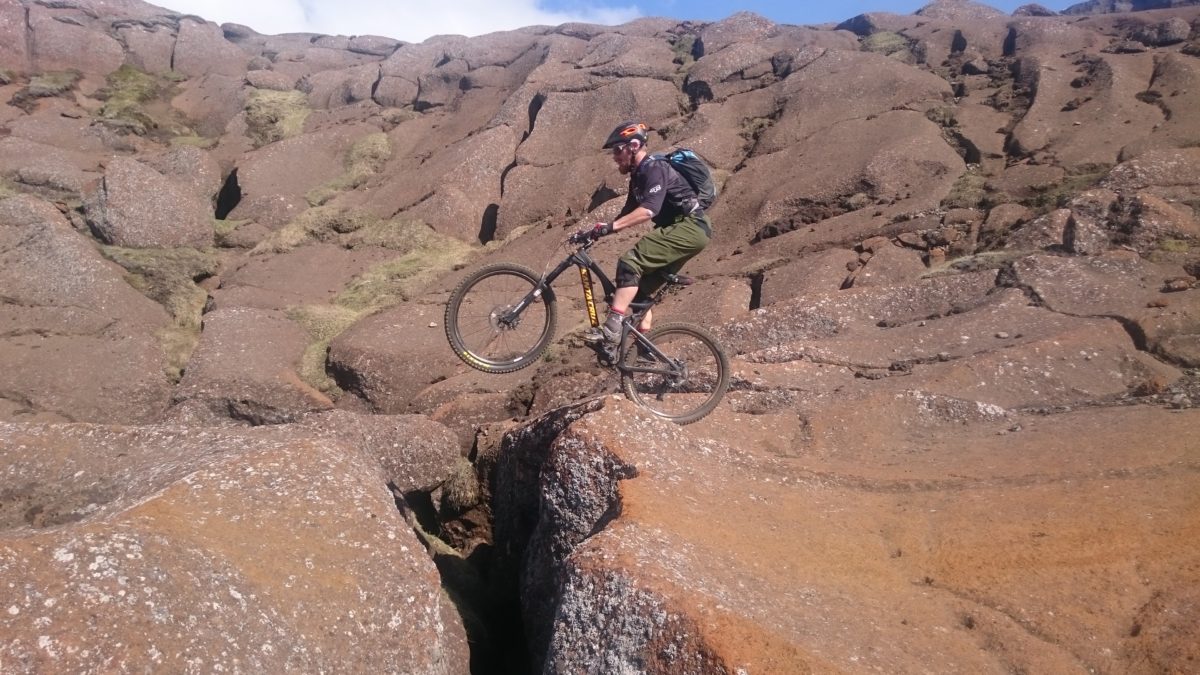 Waking up at Reykjavik Campsite, having assembled my Santa Cruz Bronson C in the late-night sunshine of Icelandic June, I was ready to find some trails. I headed to the full-service bike shop Kria Cycles for some sealant to seat my tires, and to get some local trail knowledge. They directed me to the local trails near the Reykjavik airport. Note, this is not the Keflavik International Airport that you fly into, but the local, domestic terminal in town. Adjacent to the airstrip is a forested hillside park. Between the glass-domed Perlan and the airport is a network of fun trails with north shore-inspired features. Route finding is by trial and error, but if you know to look for skinnies and bridges, and you’re willing to explore a bit, you can get in a fun couple of hours on these trails. 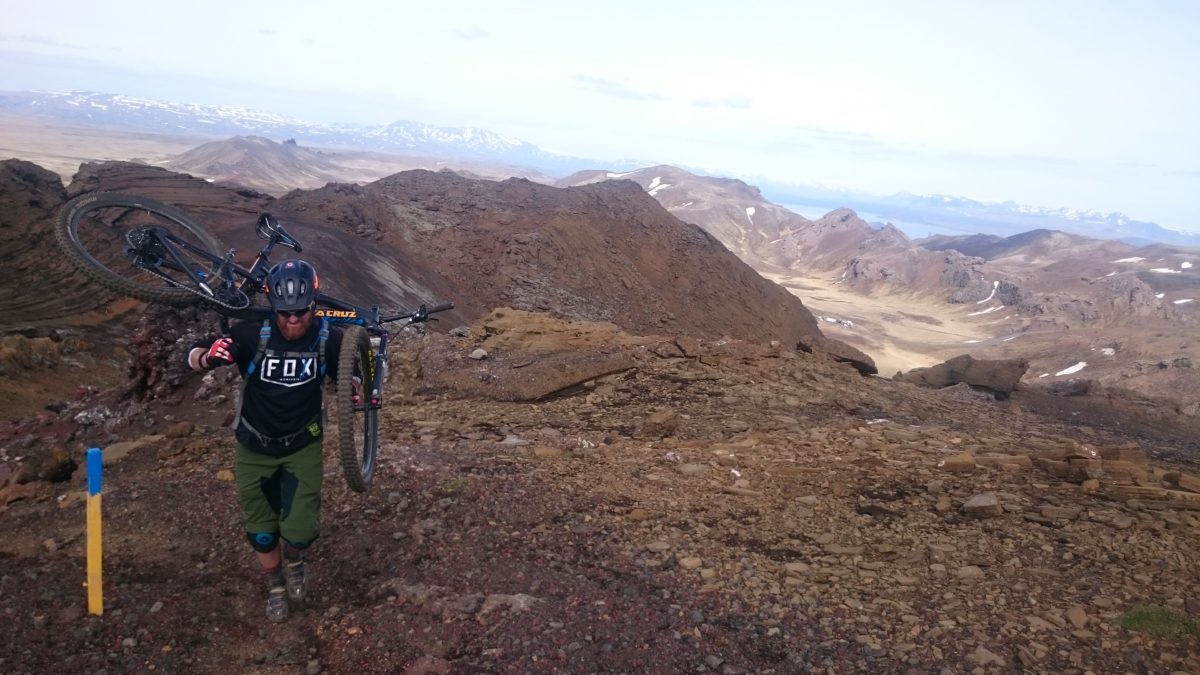 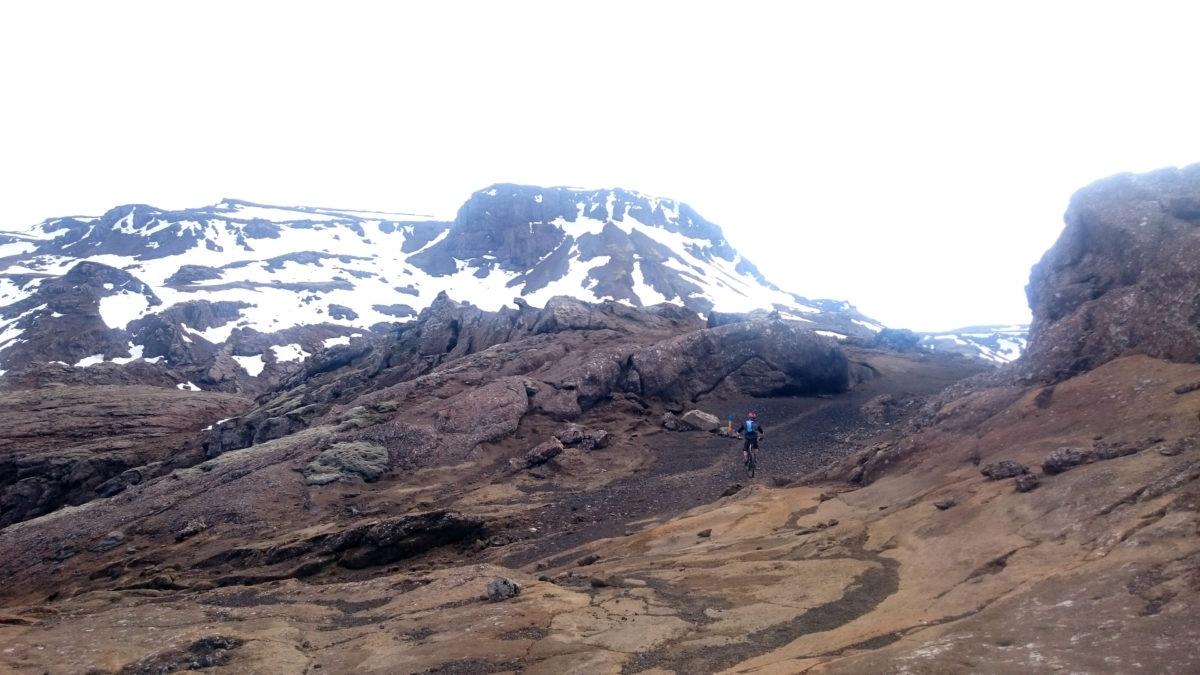 After a morning of exploring this zone, it was time to meet a local mountain biker who was to show me a trail on the Hengil volcano, located about 30 minutes northeast of Reykjavik. From a very accessible roadside pullout, we headed up to the slopes of the Hengil volcano. We ventured onto a 9.6-mile ride on varied terrain that basically did a double-lollipop. We covered mixed terrain, all with stunning, enormous views onto the broad volcanic valley below. The riding was technical–very technical at times–and included a lot of rough, loose trail bed. There were also some significant hike-a-bikes (the norm in Iceland) as well as a few snow crossings. In the end, we did about 2,600 feet of climbing, and rolled back to the truck with big smiles on our faces.

Darren Regina
I like riding any type of trail, and enjoy traveling to find new ones.

How much did your flights costs and where did you fly from?

Thanks for reading. I hope you found some useful information.

I packed my bike in a Swift Carbon Ochrana soft-sided bag (link below), and I was charged $125 to check the bike bag on the way to Iceland, but was not charged on the return trip (that’s the beauty of the soft-sided bag rather than a hard-case).

Wow, what an incredible adventure! While I applaud your effort to go it alone, I personally find that paying for a guide allows me to get the best-quality trails, tailored to my personal riding style, in the least amount of time. That means less time wandering around aimlessly on trails that aren’t that great, getting lost, etc. But of course, sometimes the wandering around aimlessly is the fun part 🙂

Greg,
I definitely see the merit of both approaches. I’ve had down-time on other trips that I’ve done (waiting for bike shops to open, searching for trail heads), but I was very fortunate on this trip. I was able to ride everyday that I was in the country, and only once did I get “lost” out on a trail. For the record, Magne and David (with Icebike Adventures) were awesome, and I highly recommend them.

Who did you rent your car from? Did they give you a bike rack or did you just put your bike int the back of the car? Also, how much did the hellibike day cost (if you don’t mind)?

Hello,
Sounds like you’re planning a trip to Iceland. You’re stoked, because it’s going to be awesome.

I rented my car through Hertz, right at the KEF airport. It was reasonably priced (by Iceland standards), as I got there before the real summer rush starts.

There was no bike rack, and since I was traveling alone, I was able to remove the front wheel and easily fit the bike (and all my gear) in the back of a compact, hatchback rental.

The heli trip was expensive. Just under $1K USD. Relative the the price of other “high-end” tours in Iceland, it’s a reasonable price, but definitely not cheap. I will say that Magne (the owner) runs a very good operation. It was a great time, and when all was said and done, worth every penny.

If you have any other questions, don’t hesitate to ask.

Thanks for the info! I’m definitely looking into it! I was looking into the guided day options and was quite surprised at the price ($450). I was in Italy last year and we did a full guide day including shuttles for $75 CAD. When you were camping, were you every worried about your bike being stolen from your car?