A connector trail which would link Eldorado Canyon to Walker Ranch, just outside of Boulder, CO has moved one step closer to reality.

The trail from Eldorado Canyon State Park to Walker Ranch has been a dream for at least a decade. Now, a proposed route has been deemed feasible based on a new study completed in November 2018 by Colorado State Parks and Wildlife, Boulder County Parks and Open Space, and City of Boulder Open Space and Mountain Parks.

The study looked at the environmental impacts of two different proposed routes. It also considered the feasibility for mountain biking in terms of grade and terrain, plus the potential capacity and traffic impacts to Eldorado Canyon State Park and the town of Eldorado Springs.

The agencies looked at a southern route as an option but found it would be more suitable to use the existing Eldorado Canyon hiking trail with some modifications.

“While the south route is considered to have major impacts on environmental and cultural resources, the north route is anticipated to have significantly less impact, and both would provide an enjoyable and quality visitor experience, and have comparatively similar construction costs, and meet the desired bicycle standards,” said Kasey French, a Boulder County Open Space Board of Trustees member who presented details on the study. “The ‘no action’ alternative would not achieve the goal of a multi-use trail connection and maintain the status-quo conditions.” 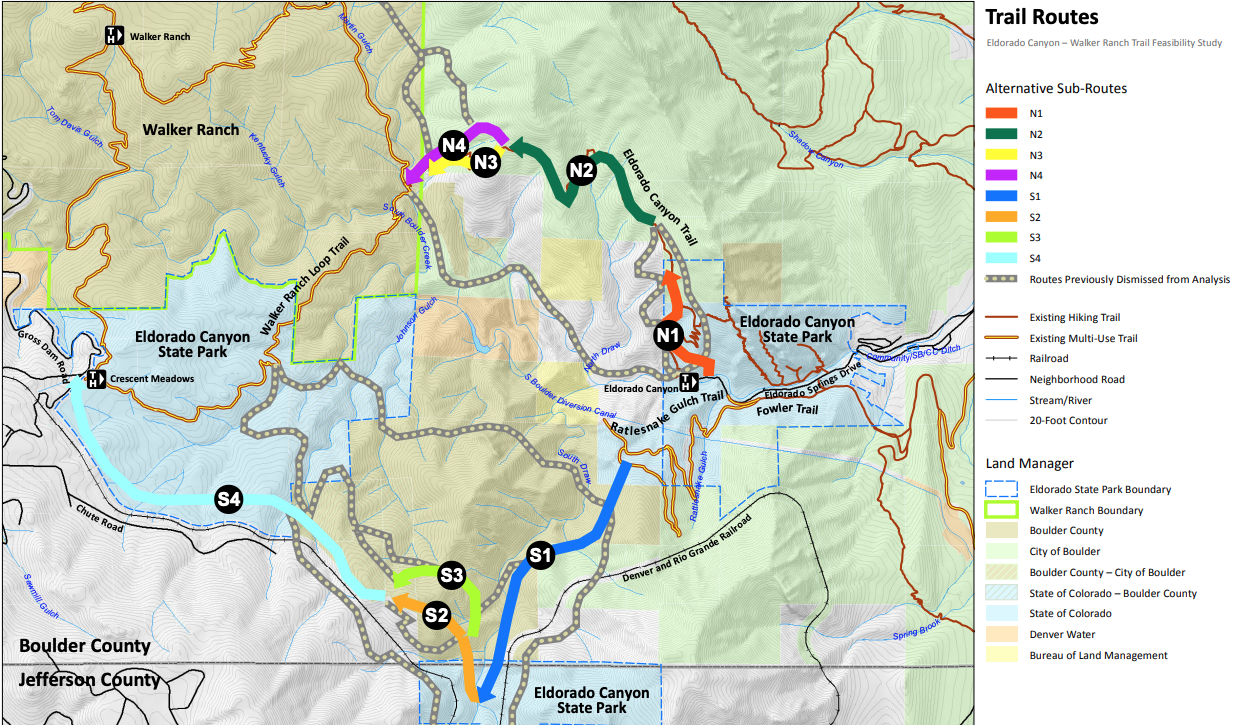 French said that giving Walker Ranch connectivity to other networks and trails has always been the goal of the Walker Ranch plan, so the ‘no action’ alternative was not a high consideration. The trail was also on former Colorado Governor John Hickenlooper’s “16 for 16” trails initiative in 2016.

As the study neared completion in 2018, the partner agencies hosted the first community engagement meeting in Boulder in August. Their goal was to gauge the level of support behind the project and to hear why other community members wouldn’t support it with an open comment period.

In November the agencies held a second open house to present the conclusion of their study and to encourage the public to comment on the study. Overall, they found that 75% of those who submitted comments supported the project, 20% did not, and about 3% had no preference. French notes that it was not a statistically valid study.

Although there is an overwhelming amount of support, the agencies found that 91% of Eldorado Springs residents were against the project, citing concerns about more traffic, hiker and biker conflict, and impact to the environment. The residents preferred the ‘no action’ alternative which keeps access and trails basically the same.

Concerns from Eldorado Springs, a small, one-road town that traffic passes through in order to get to Eldorado Canyon State Park are centered around traffic congestion and parking. The parking in Eldorado Springs is strictly controlled and enforced. The state park has seen record visitation numbers, growing from roughly 250,000 visitors in 2016 to over 500,000 in 2018.

In a public meeting on Feb.13, residents and hikers commented about their concerns on traffic and capacity, but mostly told horror stories about speeding mountain bikers or getting run off of the trail. One showed a POV video of a mountain biker riding in Walker Ranch, hoping that the agencies would take it into consideration.

Jera Lynn Dacoto, who stated that “until recently” she was was a mountain biker, spoke against the project.

Dacoto, an Eldorado Springs resident, made it known that she had no desire to share trails with mountain bikers and did not see any reason to expand mountain bike access. Her arguments did not touch on impact to wilderness or traffic. “Surely, there is no reason to share a narrow, steep trail with bikes,” she said. Dacoto queued a YouTube video to play on monitors in the chamber and shared a personal story about almost being hit. “Would you purposely walk in the narrow path of a vehicle coming towards you at 10-40 miles an hour?”

Others also voiced their unwillingness to share trails and stated that the county doesn’t need to accommodate all user groups or treat mountain bikers as equals.

Although tension from negative comments filled the air, there was still a lot of support for the project in the room.

“We believe that the IPT can serve as a tool for land managers to protect the land by focusing use pressure on a single route from Boulder to Winter Park, and decreasing the proliferation [of] social and unsanctioned trail building that’s happening throughout Boulder County.”

The partner agencies seemed to rebut many of the objections to the project during the opening presentation. Eldorado Canyon State Park has doubled its visitation in the past two years, which affects the traffic in Eldorado Springs. The agencies stated that the rise in popularity is going to continue to happen with or without mountain bike access.

The Boulder County Board of Commissioners will meet in March to consider the recommendation. The partner agencies’ recommendation to Boulder County and City of Boulder for the project will include three items: a preference for the north route over the south, plans to mitigate capacity-related concerns, and a promise to put traffic reduction efforts in place before the trail is open to mountain bikes.

I REALLY hope this was an omission, but did IMBA get involved in this project??!! It being their home town and all…

This is BMA’s territory, and they are a sub-chapter of IMBA, so in a sense yes. I don’t believe that since IMBA is based in Boulder they have an obligation to protect Boulder’s trails any more than trails in Kansas.

The residents are a bunch of Nimbies. They would rather no one have access beyond themselves. What did they expect when they live on the only road in and out of the state park.

The irony, is that by providing cycling access into the park, is that it could help mitigate some of the parking but providing an alternative human powered way into the park rather than a motorized one. The one problem there is that Boulder City hasn’t opened up the other trails into the area by bike. If some of the Mesa trails were open then that would provide another way into the park from lots further out, but no. Boulder hates mountain bikers…

Case in point. Looking at the current Boulder trail maps, the trails that allow mountain biking are currently closed due to mud season, meanwhile, nearly every hiking trail remains open. Don’t hikers cause as much damage in mud?

Nice reporting Matt, thanks for the update!