The Seeley and Hayward Clusters

We got an early start Wednesday morning for our point-to-point ride, starting at the OO trailhead and heading down to Hatchery Creek. The OO is one of the more popular trailheads, and with its proximity to the town of Hayward, this section of trail is well-traveled.

I ate a big pile of french toast at the Sawmill in Seeley, filled up my water bottle from the pitcher on the table, and threw on some arm warmers before driving to the trailhead just a couple miles away. There were 10 of us on this ride, including Jack and David from the Rock Lake ride the day before. Our mission for the day was to ride the Makwa Trail to the Mosquito Brook trailhead and complete the Hatchery Creek trail loop, which would return us to Mosquito Brook.

Jack is the lead organizer for a new local race called the Mt. Borah Epic, a 30-mile, mostly singletrack, point-to-point race that covers much of the trail we would be riding that day. The May race is a great fundraiser for CAMBA and is an excellent bookend to the Chequamegon Fat Tire Festival held in September each year.

The Chequamegon Fat Tire Festival draws mountain bikers from throughout the midwest and well beyond. As part of the festival, more than 2,000 mountain bikers line up on Main street in Hayward for a mass start at the Chequamegon 40, while another 1,000 riders ride the Short & Fat race starting in Cable; both races finish at the Telemark Resort near Cable. The race sells out quickly every year and is easily one of the largest mass-start mountain bike races in the country.

This part of Wisconsin is also well known for its cross-country ski heritage, which is a huge part of the “silent sports” lifestyle the locals enjoy. With fat bikes gaining in popularity, many mountain bikers are extending their season, and in 2012 the first annual Fat Bike Birkie race drew 300 fat bike riders–unofficially the largest fat bike race in the world. The course utilizes the normally closed-to-bikes Birkie cross-country ski trail, and this year the field has been expanded to 500 riders. 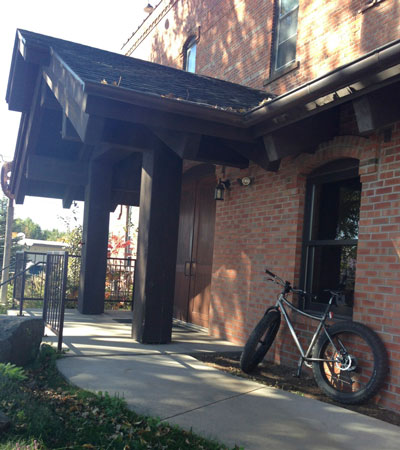 Alaska may stake a legitimate claim to the birthplace of fat biking, but it turns out a lot of fat bike developments are taking place right here in Wisconsin. For those who remember this video, it was shot on the Birkie trail smack dab in the middle of the CAMBA trail system (or the other way around, depending on who you ask). There are a still a lot of unknowns when it comes to things like fat bike trail design and etiquette, and the folks in northern Wisconsin are on the bleeding edge. I asked Ron Bergin, executive director of CAMBA and longtime cross country skier, about the relationship between skiers and fat bike riders.

“Right now I don’t think the skiing organizations are quite ready to embrace [fat biking] in terms of the interplay between skiers and bikers. Not […] because of the damage or anything, it’s the unknowns. In our trail guide we’ve flagged a few trails that we think are appropriate for fat bikes because they double as snow shoe trails and they’re going to get packed down. So far we don’t know about the interplay between snow shoers and mountain bikers, but we’ll see how that plays out.”

It’s an interesting question to consider; up until now, skiers and snow shoers have had winter trails to themselves. And whereas cross country skiers are moving at speeds on par with fat bikes, snow shoers and bikers can have a significant speed differential. Not to mention all three groups have different ideas about ideal snow pack conditions.

“[CAMBA is working to identify] trails that might be suitable [for] deliberate grooming and packing.” Ron mentioned various methods for grooming fat bike trails–including dragging equipment with snowmobiles or even specially-designed two-wheel drive motorcycles.

“[An industry group is] looking for a venue to hold a mini conference primarily focused around [fat bike trail] grooming, and they want to do it here. Because we have the snow and we have some trails. So I think there will be a lot more information as far as best practices forthcoming.”

It seems fat biking is already starting to grow up, and its teenage years are being spent in Wisconsin. 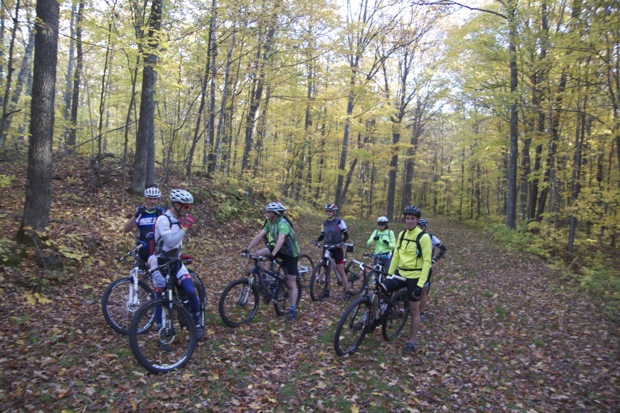 Jack suggested I take the lead on this ride, and I was a little reluctant since I didn’t know the trail. Like the Seeley Pass trail, the Makwa crosses the Birkie Trail seemingly dozens of times, but fortunately each crossing is well-signed and easy to navigate.

With no one riding out front, I decided to put the pedal down to see what kind of excitement I could drum up from the trail. The Makwa is a solidly intermediate trail and there aren’t any big descents, which meant I needed to hammer the pedals to keep my speed up. And hammer I did, though I do have to give a lot of credit to the Epic S-works that was under me. I was pinning turns, airing off the bumps, and brushing past trees at speeds I hadn’t reached all summer. 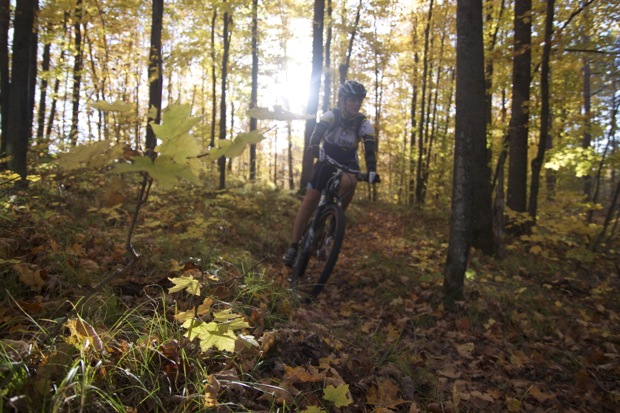 I eventually worked up enough of a gap to stop and take some photos of the group as they rode through, soaking up the sun from the bluebird fall skies overhead. The weather in northern Wisconsin can be hit or miss this time of year, but this was definitely a hit!

We continued on the Makwa trail, which alternated from smooth to fairly rocky, for several miles until we reached the Mosquito Brook trailhead. From here we joined the directional Hatchery Creek trail, which is basically a 9-mile loop around the Birkie trail. The aspens along this stretch were golden and out in full force. I kept reminding myself that I wasn’t riding in the foothills of Colorado, despite the fact that the scenery looked so familiar. The drop down to the Hatchery Creek trailhead was fast with good flow, and was one of my favorite sections during the trip. 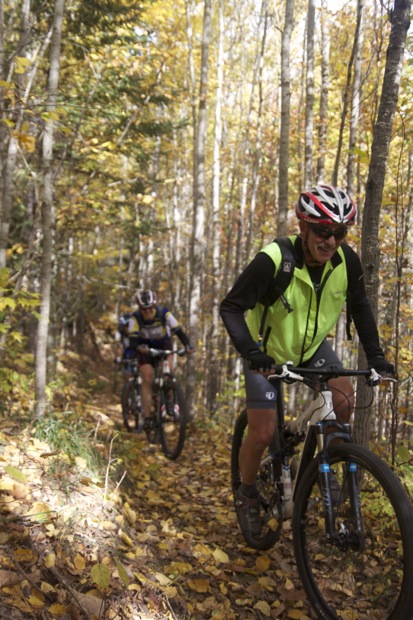 I refilled my water bottle at the Hatchery Creek trailhead and we began what I assumed would be a fairly steady climb back up to Mosquito Brook. I worked up to a steady pace and kept waiting for the climb… which never came. Before I knew it, we had covered another 4.5 miles and were back at the trailhead where we would end our ride. Technically we ended the ride almost 300 feet lower than where we started at OO, but it felt like a whole lot more. 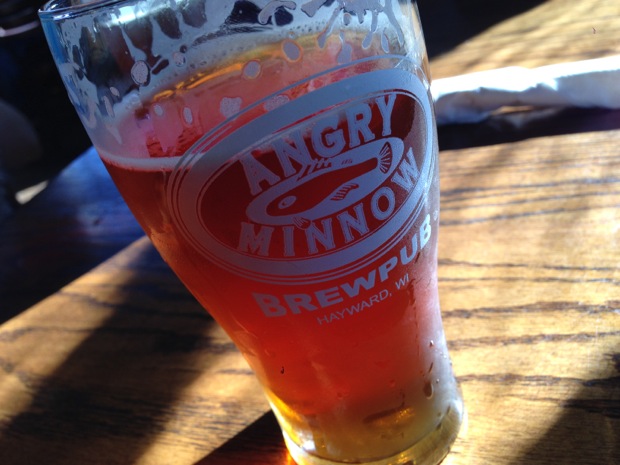 After the ride, James picked up David and I for lunch at the Angry Minnow brew pub in Hayward. The brewery is best known for its River Pig American Ale, and I can vouch for its deliciousness, particularly after an 18-mile ride. I ordered the Tear Jerker burger with fried red chiles, pepper jack cheese, chipotle spread, and what appeared to be a layer of Sriracha on the bottom bun. I was so hungry I quickly wolfed down my burger, spice and all, somehow avoiding shedding a single tear.

The only tears I did shed on this trip were on my drive back to the Duluth airport. It wouldn’t be long before leaves, and eventually snow, would cover the CAMBA trails, rendering the singletrack mostly unrideable until after the spring thaw. But that’s part of what makes trails like this so special–there’s such a fleeting window of opportunity it’s almost impossible to take the excellent riding for granted. I can’t wait to get back for another shot.

First of all, looks like you need to eat a couple of burgers Jeff. I really enjoyed the part of the article that describes CAMBA working on advocacy for fat bikes to ride winter ski trails. To my knowledge there are none in Colorado, despite an explosion in the fatbike industry and the Denver/Steamboat areas epicenters. I contacted several pay-to-cross country ski places last year…and all of them said no to me riding a fatbike on their groomed courses. Some did not have an answer, others were worried about destroying the grooms, and others about me running into other skiers (really?). Still, I expect it is a movement that will eventually have resorts capitulate once they realize the safety, low impact, and potential revenue…just like Devin Lenz’s downhill ski bikes started at Winter Park and are now at 2-3 resorts. Still, I can ride my fatbike on dirt trails, and more importantly, ride it year round on most trails in Colorado when other bikers can’t or won’t. I commend CAMBA for their advocacy…great article.

I contacted the Nordic Center in Vail and I think the lady who is in charge of the place teaches MTB skill clinic during summer email back to me “Absolutely No biking allowed on Nordic Trails, please spread the word, Thank you” and also there was a discussion in Singletrack & Skinny Tire Sisters of Western Colorado on their fb page and some MTB sisters sounded a little hostile (riding on x-country groomed trails). When I lived in Golden, I drove to Flying J ranch to do some fat biking and that is a fun trail if the trail is packed. Now I moved to Eagle and basically was told to ride back country jeep rd. I ride my fattie all year long but riding on the packed snow is so much fun!

The trend toward allowing fat bikes on xc ski trails is picking up speed:
http://www.nordicskiracer.com/news.asp?NewsID=15205
http://www.xcskiresorts.com/hot-topics.php

What seems odd is the prohibition on bikes due to safety reasons: that a biker might collide with a skier. This is, of course, based on the so-called “speed differential” which is often cited as justification for keeping regular mountain bikes off singletrack — “they go too fast and are an inherent danger to hikers.” It only makes sense that anti-bike advocates break out the same argument in winter. So what’s odd? In some areas, fat bikes have been banned from groomed snowmobile trails due to the speed differential–even though bikes are the slow ones in that equation! First we’re too fast, now we’re too slow. Unfortunately, we must often deal with opposition that simply has more clout even if they don’t have fairness, facts, or rational thought on their side.

As far as the pay-to-play operations go, that’s a business decision that’s entirely up to them, but as far as public lands go, that should be open to all who can quietly, safely, and sustainably enjoy the land.

Thanks! I knew of the one in WA but I have yet to find a place in Colorado. A lot of the public lands trails are pretty steep and often buried in inches of snow that make it too cumbersome to climb. I was hoping to find a relatively flat groomed ‘trail’. Heck, I’d take it to the ski resorts and bomb downhill if they would let me. Imagine taking a fatbike down a nice blue run at Winter Park, maybe hitting a few jumps in a bike specific snow park! That would be a blast.

Adding an electric motor to FAT TIRE bikes makes the steep hills manageable and adding a front ski makes them work well in the snow.
http://www.pedegoelectricbikes.com/pedego-trail-tracker/