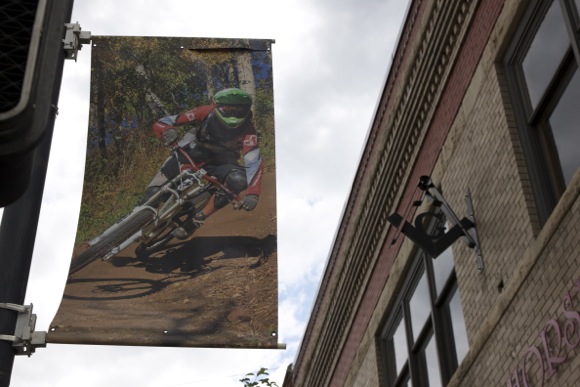 Despite living in Colorado four years and spending part of the past three summers there, I had never visited the town of Steamboat Springs. Well known as a ski destination, Steamboat Springs also claims more than 500 miles of singletrack in the area and is home to Moots mountain bikes and Honey Stinger energy foods. After hearing about the Emerald Mountain trails from another singletracks member I just knew I had to go!

For those who aren’t up on their Colorado state geography, Steamboat Springs is located in the northwestern part of the state, roughly parallel with Aspen to the south and Fort Collins to the east. The thing is, the town isn’t really easy to get to from anywhere–but once you’re there, miles of secluded singletrack stretch as far as you pedals can take you.

With just a day in Steamboat I didn’t even attempt to scratch the surface of the backcountry trails in the area; instead, I drove straight to Emerald Mountain to get a feel for the “in-town” riding. I say in town because the trailhead is literally just a couple blocks off main street in the central business district. At the trailhead I was surprised to find a number of attractions including an alpine slide, a ski jump track, and a rodeo stadium with parking lots scattered beside the mountain. In winter, Howelson Hill offers lift service to 12 downhill ski runs with 440 feet of vertical drop but in summer, the Howelson / Emerald Mountain trail system gives bikers and hikers access to incredible aspen forests and sweeping vistas. 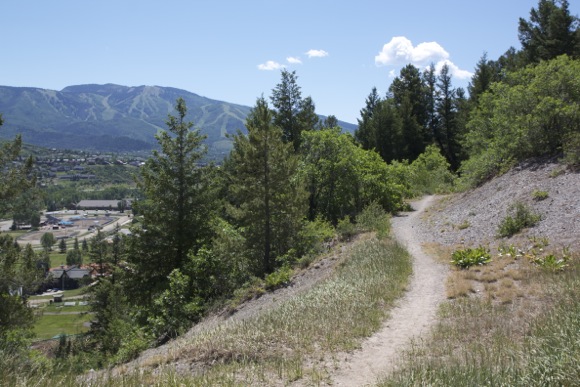 View of Steamboat ski resort and town below after the initial climb up Howelson / Emerald Mountain.

I was hoping to find a trailhead kiosk with a map at the base of Emerald Mountain but I was out of luck. Fortunately I did have a PDF map on my phone but it was difficult to navigate. After riding a couple laps on the seemingly neglected BMX track, I rode past the odoriferous sulpher cave and up a wide, steep gravel road to the first low ridge. The sun was already blazing and the lower part of Emerald Mountain was completely exposed, leaving me sweating and exhausted from the beginning.

I decided to stick to Blackmere, a gravel road, for the climb to make things easier–head down, pedals mashing. After climbing for nearly 3 miles I spotted another rider ahead of me as he ducked onto a marked singletrack trail on the right. The trail continued the climb but it was smooth and it felt great to finally get into the shade. After a short ride on a trail called Blair Witch I turned left onto the Quarry Mountain trail where the scenery quickly went from just beautiful to eye popping. 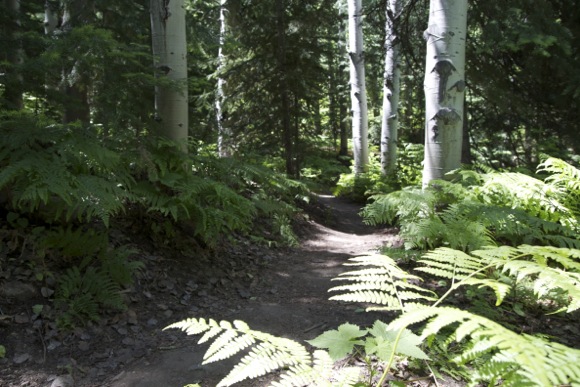 Fat, hulking aspen trees line a narrow ribbon of singletrack as the trail gradually ascends the mountain. Soft, wispy ferns tickled my legs as the trail transitioned between tiny pocket meadows to dark, dense evergreen-pocked forests and back again. I stopped to take pictures at a bend in the trail and was surprised to see a group of three riders descending toward me–up until that point I was lost in my own world, thinking I was all alone. The fern-lined trail was punctuated in places with bright yellow and pink flowers and I couldn’t help but slow down and take in the scenery. This felt like a real Colorado backcountry ride yet I was only a couple miles from town! 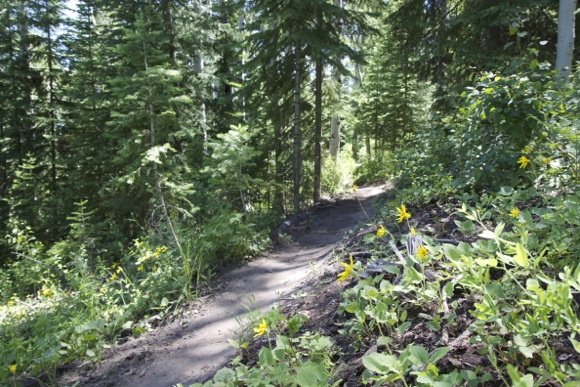 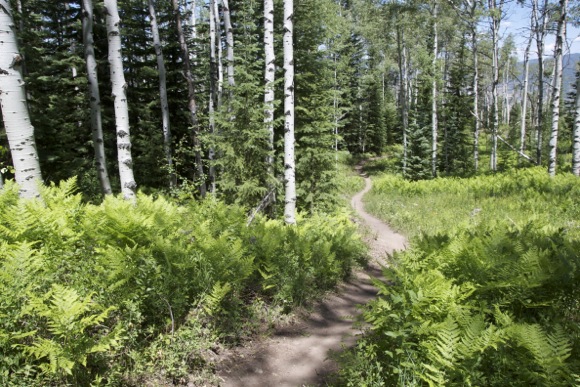 The Quarry Mountain trail eventually intersected with a trail called Hudson and I knew I should start heading back soon but I just had to keep going. I rode up Hudson for a ways until it started getting steep, then turned around for the descent. After a quick jaunt, Hudson spit me out on Prayer Flag Road which would take me to the MGM trail. For a moment I considered turning onto Blair Witch again but realized I just didn’t have time. 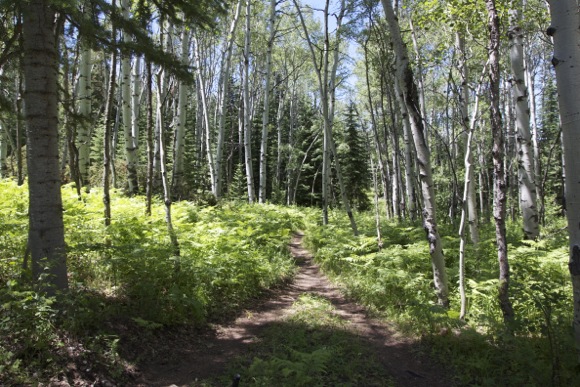 The MGM trail didn’t disappoint with more narrow, aspen-covered singletrack and one of the coolest compact switchback sections I’ve ridden. The trail executes at least half a dozen smooth and banked turns down a narrow bowl but the wildflowers and plants are so tall you can’t see the next turn beside you. I really wanted to get a photo of the trail showing all the switchbacks but you’d need to be high in the trees to get a true sense of the trail.

MGM eventually spits out at a wide, grassy meadow where I really opened things up, aside from slowing for the occasional turn. Before I knew it I was back at Blackmere where I decided to climb a bit to the top of the ski lift to descend Lupine back to the trailhead. What a ride!

Emerald Mountain is definitely one of those trails I wish I could ride over and over again, if for no other reason than to explore every square inch. My route left out a lot and I’m already aching to get back to Emerald, let alone all the other great trails nearby. Steamboat Springs is clearly a summer mountain bike paradise–the only challenge is choosing which trails to ride!

Great review! I just moved to Denver so I’ll check it out!

That sounds amazing! My list of places to visit just keeps getting longer and longer… after two months on the road this summer, I think my list has doubled in size instead of shrunk 🙂 How is that possible?!

There are now 25 miles of single track on Emerald Mountain (front and back side). While Emerald Mountain has been around for a few 100 million years the majority of the north side trails (everything described in the post) have been in the public domain for less than two summers . Efforts are under way right now to create the signage and mapping needed to make riding and hiking on Emerald a more fun and less adventuresome experience. Stay tuned for 2013 and beyond.
Dan Smilkstein
President Emerald Mountain Partnership

I love a well-mapped out trail. They make the ride even more enjoyable!

I’m glad this trail system finally made it on the site, it’s one of my favorites!

Wow, so beautiful, clearly going on the bucket list. Thanks for writing and thanks to Dan and the Partnership who’s working on it.

“I think my list has doubled in size instead of shrunk How is that possible?!”

Wow. What a poetic review! To mirror another post, the signage has been improved over the past year. There are several pdf’s of the trails available as well. The City of Steamboat Springs website has a decent one.