“The Iron Range Resources and Rehabilitation Board on Wednesday approved spending $4.95 million on up to 92 miles of mountain bike trails” in Northeastern Minnesota, according to a report on MPRNews.org.

The $5 million will be split between three different trail systems. One trail system will be built at Giants Ridge ski area in Biwabik, and other two will be built “on top of reclaimed iron ore mines, giant piles of waste rock, and around water-filled mine pit lakes near the Iron Range towns of Cohasset and Chisholm,” according to the article.

Proponents of this trail development cite the incredible success that the nearby Cuyuna Lakes trail system has achieved. While Cuyuna’s initial phase was first opened in 2011, in the intervening years Cuyuna has become possibly the highest-acclaimed and best-known trail system in the state of Minnesota, and is now known as one of the key trail systems to hit in the Great Lakes Region. While Cuyuna had grown to 25 miles of trail over the intervening years, just last year “the state Legislature approved $3.6 million to nearly triple the length of the trail system at Cuyuna to 75 miles.” 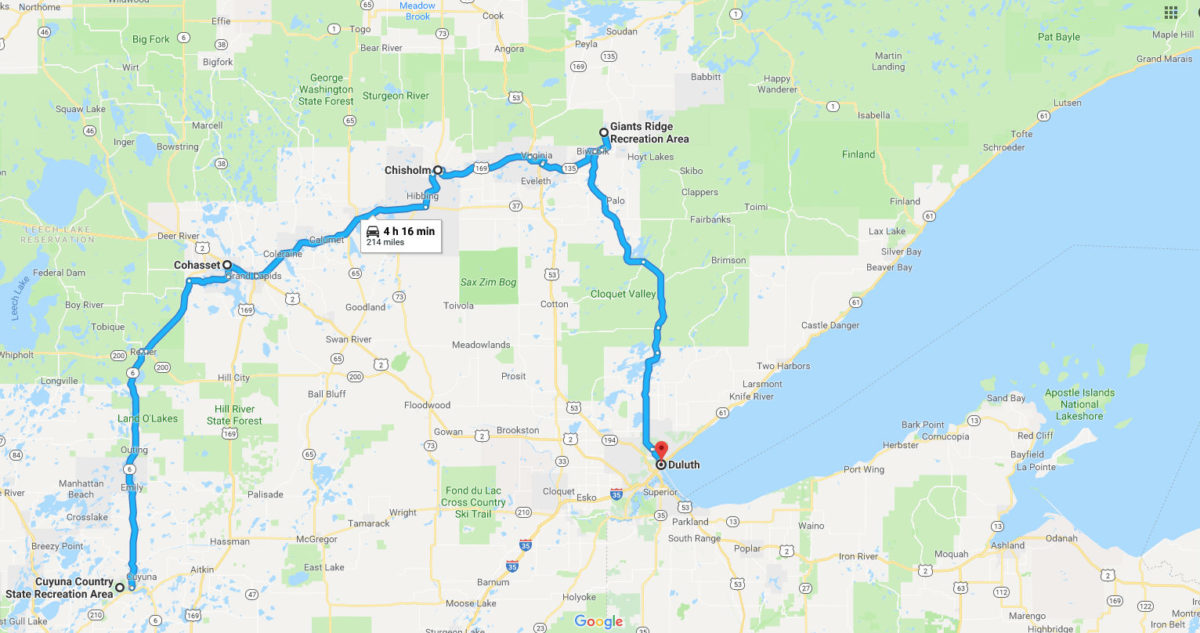 On the map above I’ve drawn a route from Cuyuna to Cohasset, Chisholm, Giants Ridge, and then ultimately ending in Duluth. Duluth is yet another epicenter of mountain bike trail development in the Great Lakes Region, having worked for years to develop a 100-mile contiguous mountain bike route through the city. Spirit Mountain in Duluth also offers chairlift access to an excellent downhill mountain bike park.

Not routed on the map but worth mentioning is Grand Marais, which you can see in the far upper right hand corner. Grand Marais has also been working hard to develop their trail system, and especially their fat biking trails and events. Races like the Norpine Fat Bike Classic have become annual traditions.

Based on the success of other mountain bike trail systems in the region, the Iron Range Resources Commissioner Mark Philips is optimistic that “the trails could help spur tourism on the Iron Range, improve quality of life for residents, and help attract and retain professionals and families to the region,” according to the article. “You can tell I’m enthusiastic about this,” he said.

While proponents of this trail development are focused on the regional draw and boosting the economy, they argue that developing these three new trail systems, along with all of the incredible trail systems that have already been built in this region, “will cement northeastern Minnesota’s position as a burgeoning national and international destination for mountain biking.” I have to say, they’re making a really strong argument!

Gear
How Fat is Your Seat Tube?
Gear
Our Favorite Mountain Bikes of 2022, And All the Rest...
Gear
This Gift for Mountain Bikers Will Knock Their Socks Off
Gear
Why are Good Rain Jackets so Expensive? We had to...
Subscribe
Login
Please login to comment
7 Comments
Most Voted
Newest Oldest
Inline Feedbacks
View all comments

Man, being from Wisconsin I am trained to hate everything Minnesota, but this is awesome. I will definitely be making plans to try out these trails. There really is some great mountain biking across Minnesota, Wisconsin and Upper Michigan.

Cuyuna has 25 miles, but they are actively building them out. I think the plan is to have the 75 miles completed sometime in 2019. I’d say a week is a little much to devote there currently, but you are an easy 1hr 45 minute drive from Duluth’s trail system, and about 2 hours from a huge network of trails in Northern Wisconsin near Hayward, WI. If you took a week, you’d want to hit a few areas, but they would all be worth it.

All of theses area are in my backyard, so I spend a few weekends a year devoted to riding them as much as possible in a 2-day period.

Wow, great to see. As Bobzer mentioned, the entire north woods region has good riding and a ton of potential, and its fatbike potential is off the charts. I love that country in the winter. Take out a couple of months in the summer when the bugs overtake the north woods, and you have an amazing mtb region. Does anyone know if any one of the trail systems is less infested with bugs in the summer than the others?

Bugs are bugs….. bring the big dope and ride!! ????
Although September and October you won’t have to use as much bug dope as the summer months!!

Having grown up in Central Wisconsin, I found that mountain biking was actually a great activity despite the bugs. As long as you keep moving, you’re fine!

This is awesome news. This area is fantastic to spend summers on the lake. Now, this adds another activity to the list. I’m glad investing in natural resources for recreation became a priority like it has.

Came across this article in early 2020, and let me just put in a plug that these two areas (downhill runs at Giants Ridge and the new trails at Tioga/Cohasset/Grand Rapids) are really starting to take shape. I got a taste of both in late 2019 and really liked what I saw. I love the riding at Cuyuna, but in my humblest of opinions the Cuyuna trails need more optional lines. From what I saw at Tioga, they are stepping up the variety. Really excited to see more in 2020.