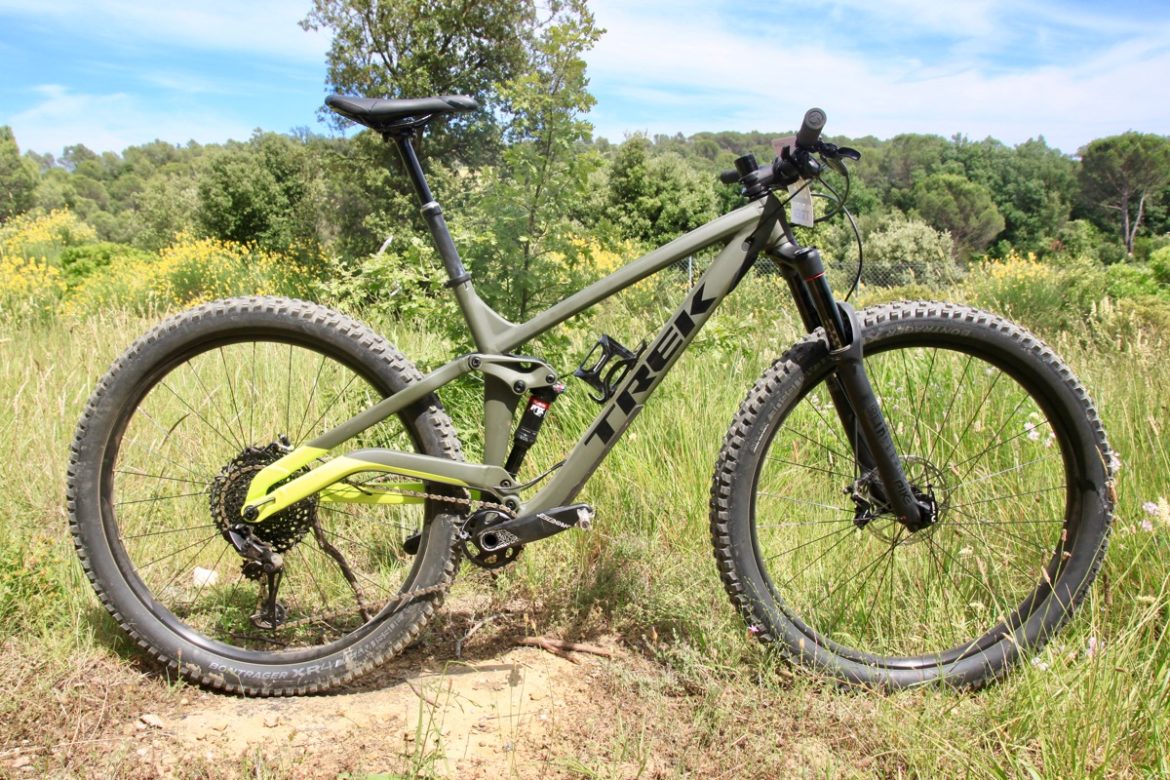 The all new Trek Full Stache was announced just before Sea Otter California, leaving many of us curious to know what it feels like to ride a 130mm, full suspension mountain bike with massive 29+ tires. Well, after traveling across the Atlantic to Sea Otter Spain, I had a chance to find out. 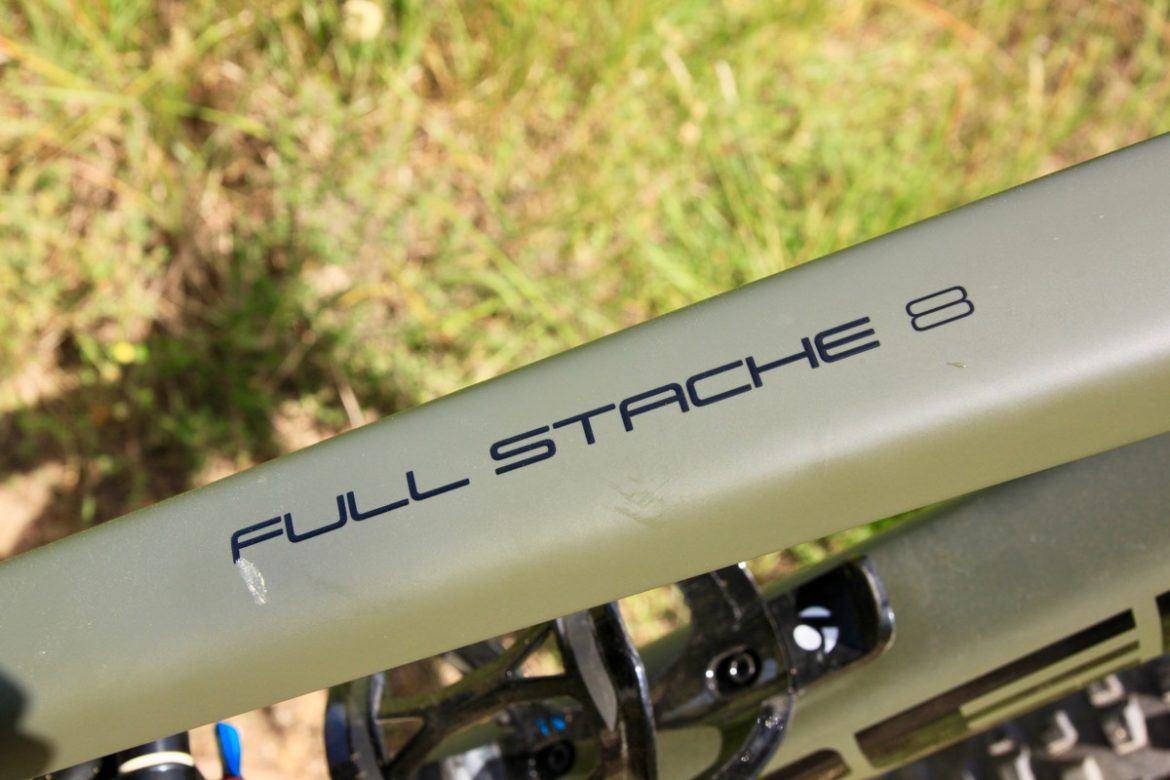 Trek rolled out the Full Stache with just a single frame option made from aluminum. Not only that, there’s only one build available, dubbed the Full Stache 8, though buyers can opt to buy the frameset by itself. These days it’s a bit unusual for a large company like Trek to launch a new bike in aluminum without a carbon option, so perhaps the company is still feeling out the market for full suspension 29+ bikes. After all, carbon molds are expensive, and high sales volumes are necessary to recoup those costs. 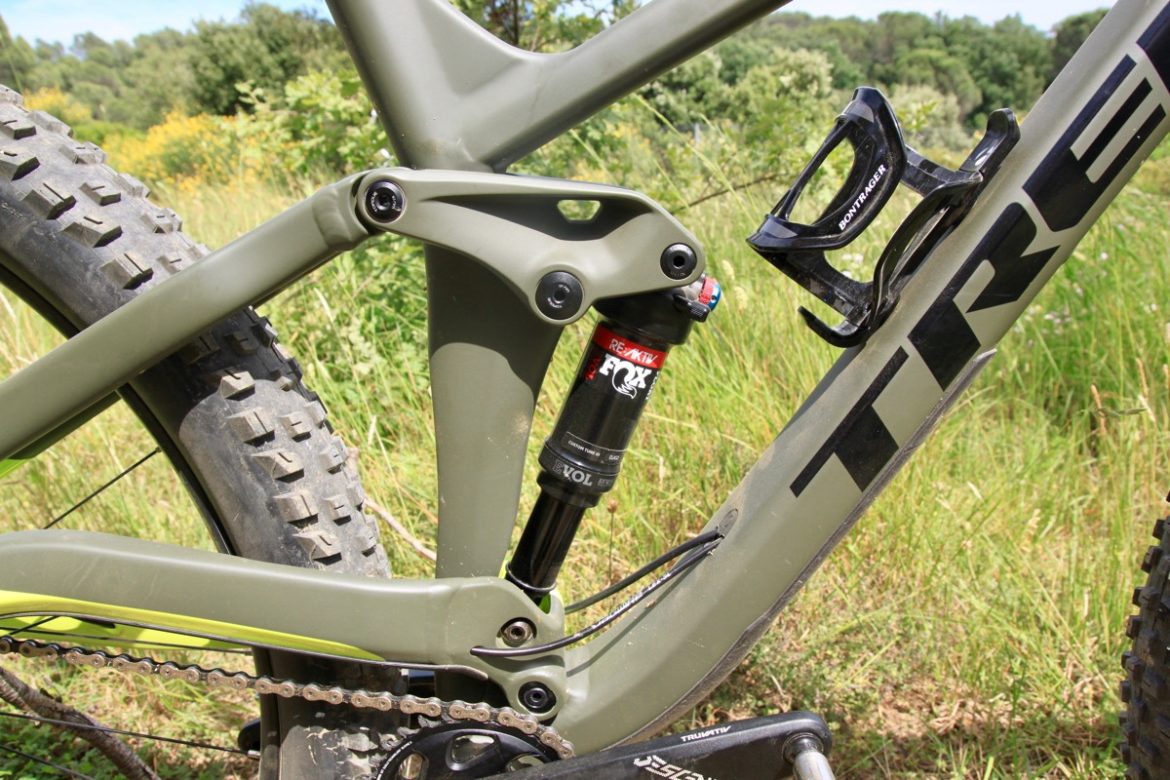 The Full Stache makes use of Trek’s ABP suspension design, which seeks to minimize the braking force impact on suspension. A Straight Shot downtube with Knock Block promises to make the frame stiff and efficient. The rear end features Boost 148 spacing.

The aluminum frame sports angular, hydroformed tubing painted army green with a matte finish, along with high-vis yellow highlights on the stays. Internal cable routing lends a clean look to the bike.

Trek went with a 67.4 degree head tube angle, adjustable down to 67 degrees with the Minolink, which is a nice compromise for a trail bike designed to handle a variety of unexpected conditions. Bikepackers seem to have embraced the 29+ wheel size more than any other group, thanks to its ability to roll efficiently mile after mile, while offering the ability to get up and over almost any obstacle. With that in mind, Trek positions the Full Stache as a bike that can not only survive deep forays into the wild, but also allows riders to shred along the way. 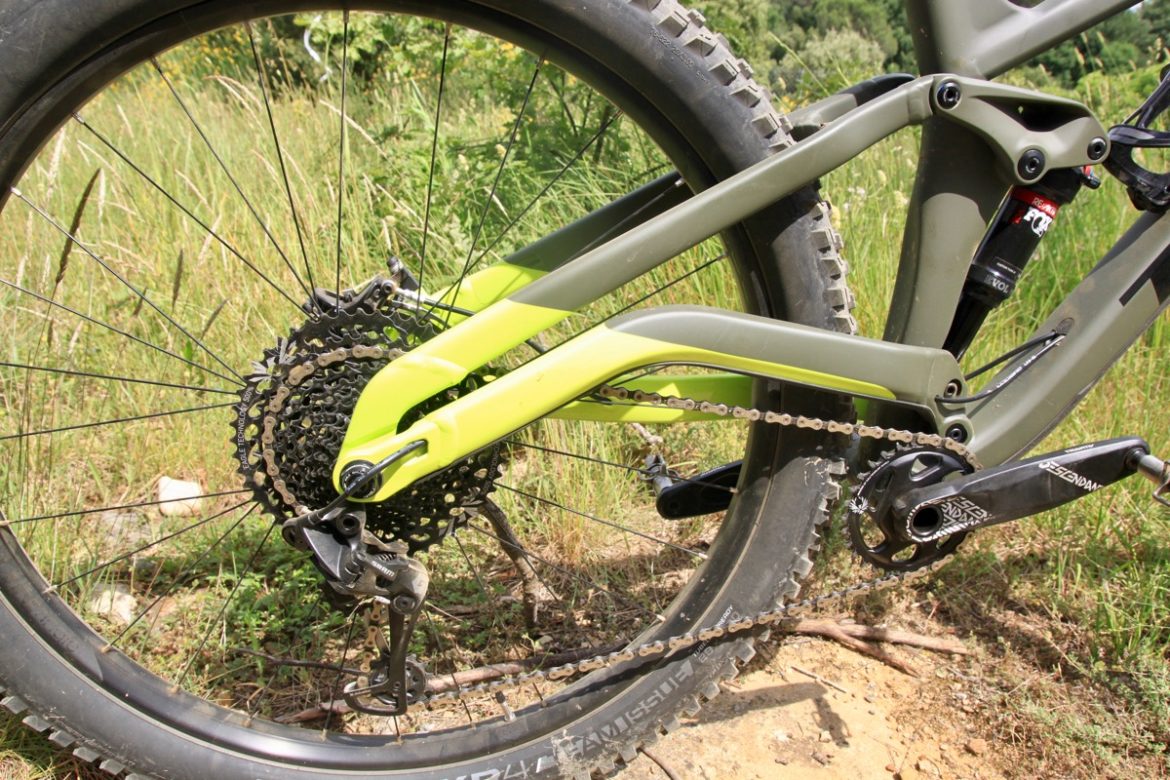 Right off the bat, Trek includes a 130mm RockShox Pike RL fork, just to let buyers know this bike isn’t messing around. Trek pairs the RockShox fork with a Fox Performance shock in the rear, tuned with Trek’s exclusive RE:activ tech. (Mixing suspension brands is a little unusual for a Trek build, but is perhaps driven by the fact that there is no 29+ Fox 34 fork available. ) 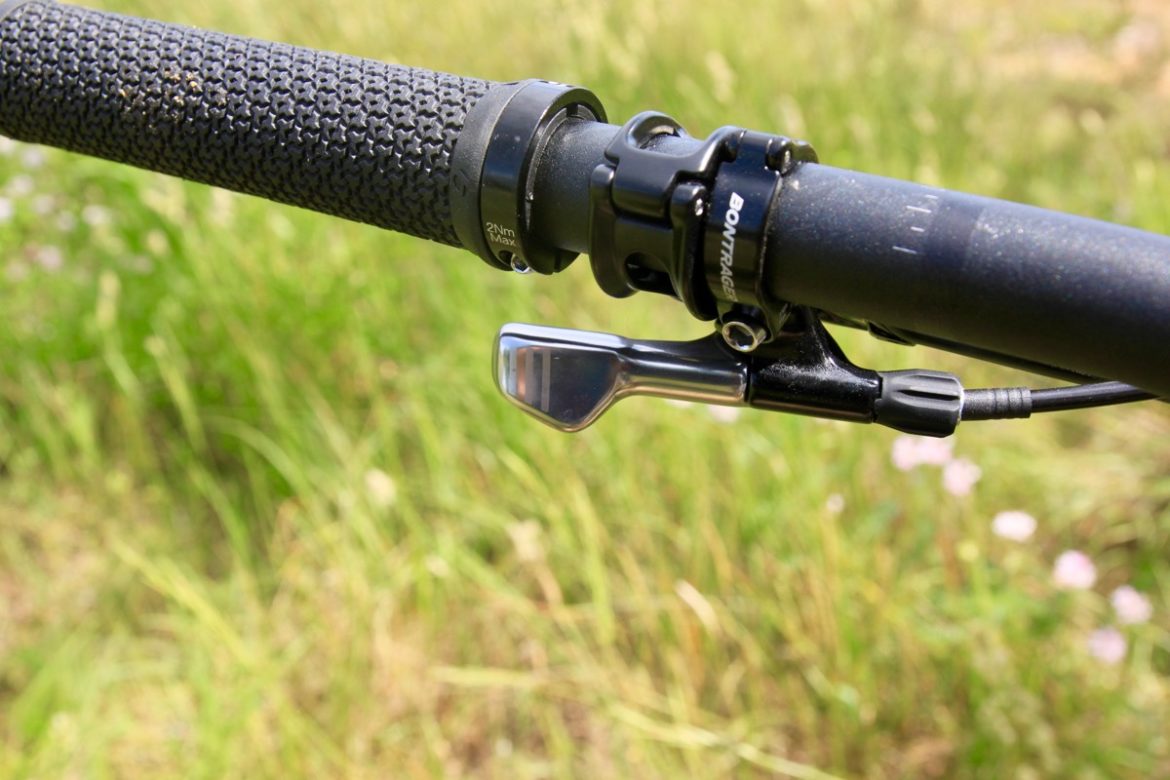 Naturally the Full Stache comes with a dropper post — the Bontrager Line, internally routed — with travel up to 150mm depending on the frame size. I don’t have a lot of experience with the Line dropper post, but in my brief test it worked great, and I love the remote Trek uses. Trek chose a SRAM GX Eagle drivetrain for the build, with a 30T chainring up front. To me, this suggests the Full Stache is expected to roll through some serious slogs that require a lower gear ratio than a typical trail bike running a 32T (or even a 34T) chainring.

Trek utilizes various Bontrager-branded parts on the Full Stache, including the 35mm diameter, 750mm wide handlebars and the 60mm stem. While the wheelset features Bontrager hubs, the 40mm rims are Sunringlé. 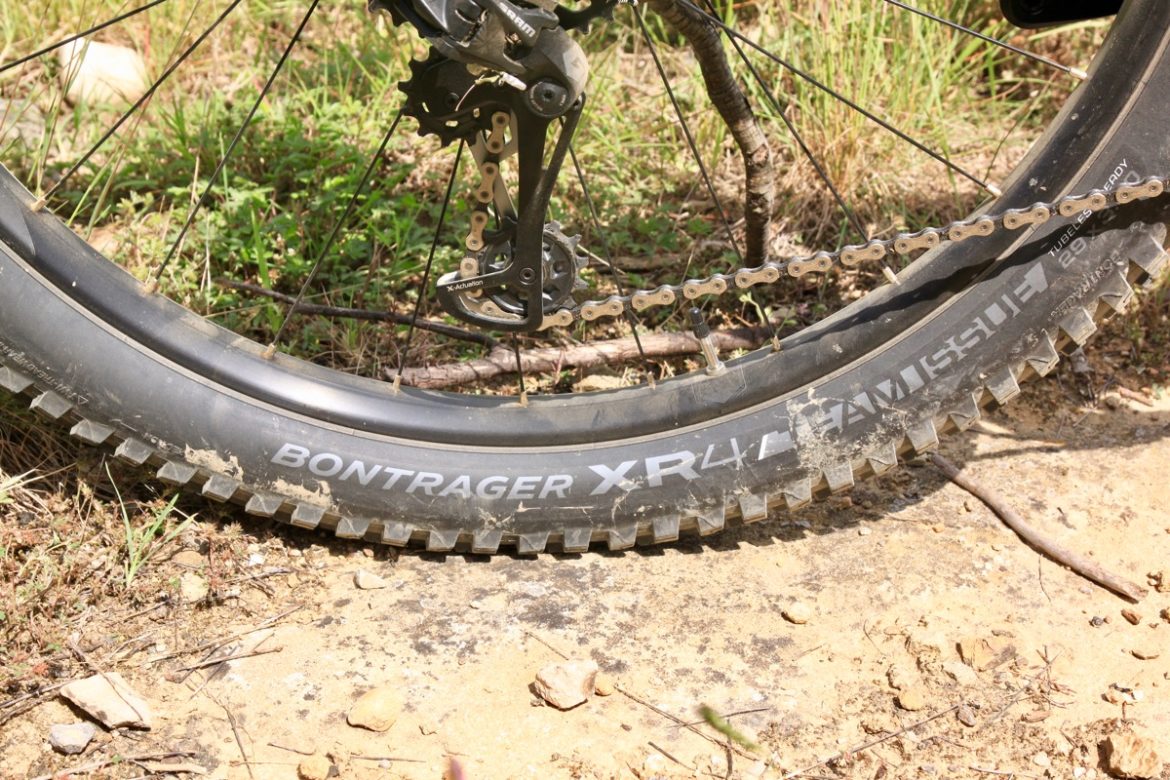 Clearly the tire size is a big distinguishing feature for the Full Stache, and in this department Trek provides 29×3.0 Bontrager XR4 Team Issue, tubeless-ready tires. Billed as an aggressive yet fast-rolling tire, the XR4 seems like a great fit for the bike’s intended use: clicking off mile after mile through rugged terrain.

SRAM Guide R brakes and a Bontrager Evoke 2 saddle with chromoly rails round out the build. 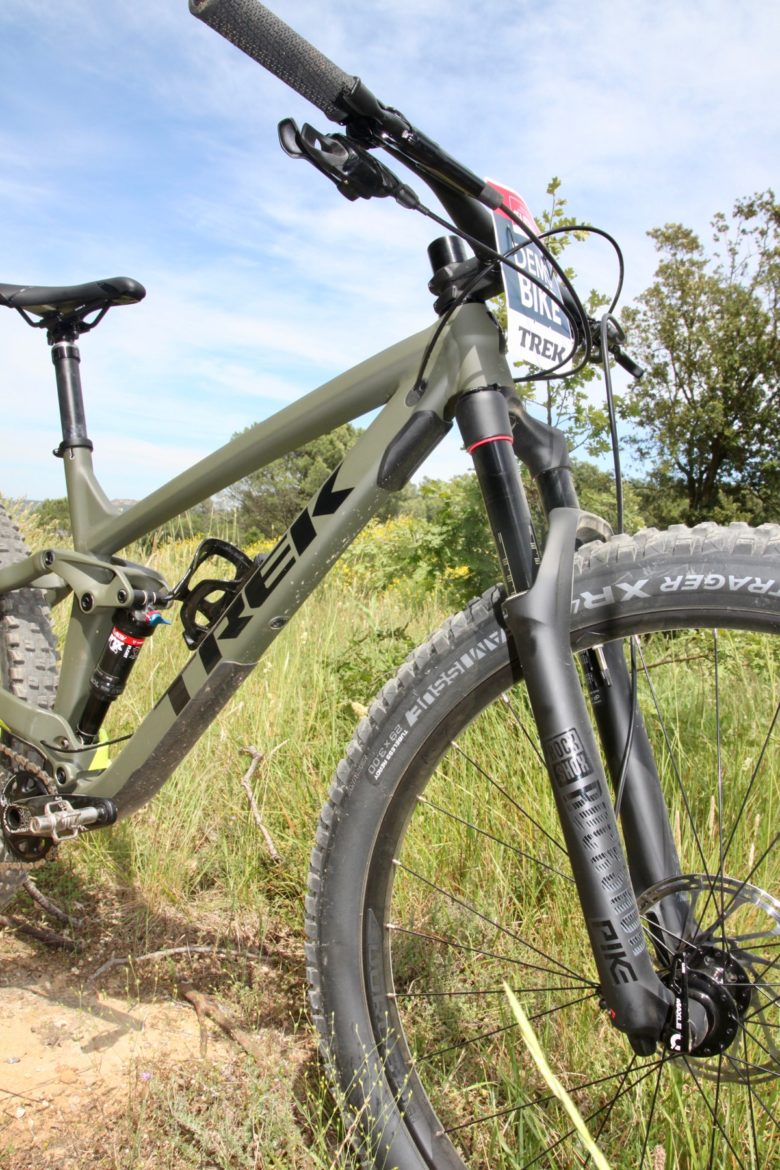 I tested the Trek Full Stache in a size 19.5 frame, which in retrospect is a probably too small for me. I’m on the line between a 19.5 and a 21.5 according to the Trek sizing chart, and while I was able to get the seat post set to the correct height, a 21.5 would have been a better fit.

Reading the marketing materials for the Full Stache on the Trek website, it’s clear this is a bike designed for very specific riders and conditions. According to Trek, this bike is right for you if:

You believe mountain biking isn’t about racing or showing off. It’s about the experience of being out there in the rough, wonderful wild. For you, every ride is both a battle against nature and an appreciation of it. There’s a whole lot of beauty in dirt, rocks, and roots. Trails don’t need to be perfectly sculpted to be enjoyed.

To me, this paints the picture of a loner masochist who just wants to grind out mile after mile of Type-2 fun. So it was with a little trepidation that I set out on the mostly tame, suburban trails outside Girona, Spain to take the Full Stache for a spin.

The Full Stache is a heavy bike — nearly 34lbs. for the smallest size — and yet out of the five bikes I tested, I notched my fastest time up the main climb aboard the Stache. (Yep, I’m surprised too, but I double- and triple-checked.) The 30T chainring up front takes some of the sting out of all that weight, and once those massive 29+ wheels were rolling, the momentum seemed to keep me trucking uphill at a good pace.

Pointing the Full Stache downhill, I was slightly less impressed. For starters — and no surprise here — the big tires don’t handle as well as tires with a smaller outside diameter. Not only that, the high-ish, 343mm-tall bottom bracket, no doubt necessitated by the tall tires, made the descents feel a little awkward. Perhaps the big wheels just take some getting used to, but for my brief test they just made the bike feet a little clunky.

Honestly I’m not sure what to make of the Trek Full Stache. I suppose compared to the alternative — a hardtail 29+ bike or a trail bike with standard tires — the Full Stache offers some advantages to intrepid backcountry explorers. But few of us are lucky enough to regularly go for these types of rides, so the Full Stache basically upends the idea of a do-all trail bike. Instead, the Full Stache seems suited as a decent role player in a quiver of bikes, but not as an everyday rider.