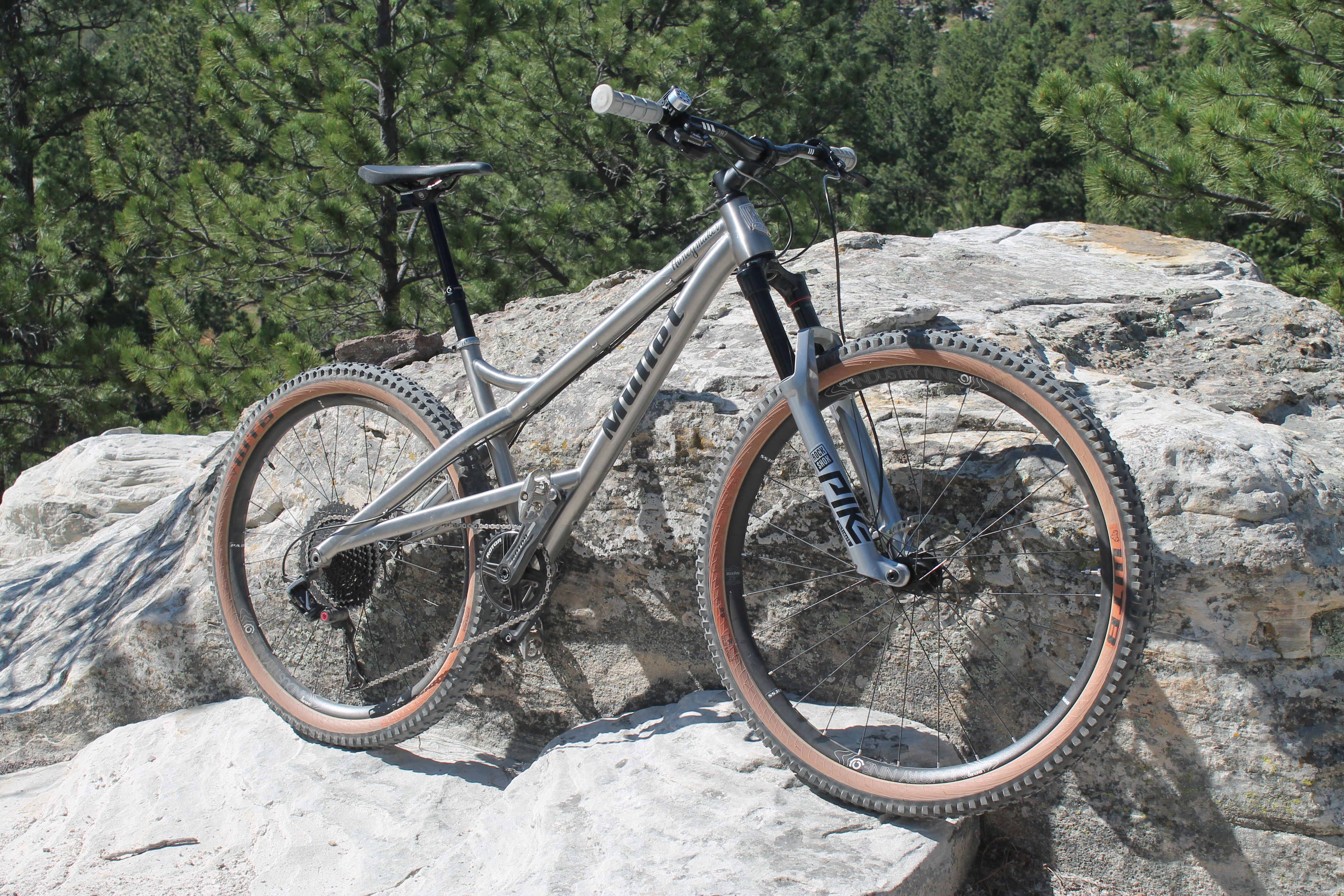 In 2015, I purchased my first mixed wheel bike. Having demoed one and felt firsthand the undeniable performance benefits on the mountain, there was no way I wasn’t getting one. Nothing performs like a properly-designed, mixed-wheel bike. It wasn’t just me saying so, as the few who overcame the fear of the unknown acquired them and began winning races, setting Strava KOMs or, or at a minimum smashing their own personal records.

Knowing the benefits of a mixed-wheel bike, and the part Mike Vidovich played in designing my current bike, I was excited to hear of his decision to launch his own company which would focus exclusively on mixed wheel bikes. Joining forces with Miles Schwartz of Miles Wide Industries, Mike began designing his newest mixed wheel creations under the banner of Mullet Cycles. Having always wanted to thrash a titanium hardtail, I was further excited that Mike’s first offering would be exactly that. Lasty, I had been on the lookout for a good plus-size hardtail. Putting the cherry on this already delicious cake was the fact that Mike decided to give Singletracks the first crack at a full field test and review of his first production model.

It is important to note that Mike’s philosophy in frame design is concerned — I would even say obsessed — with performance above all else. There’s no shortage of great bikes out there and he has no interest in creating just another great bike.  If it’s not significantly better in a true knobbies-on-the-ground sense, it’s a “why bother?” Now if it can be made genuinely faster, safer, or more fun, or better yet all three, then that’s something worth pursuing.

The first modern mixed wheel bikes were produced with the idea of getting both the rollover advantage of a big front wheel and the maneuverability of a smaller rear wheel. The problem is they simply mixed wheels on the current geometries. There was modest accomplishment with regard to the original intent, but those first designers were unable to realize the full range of benefits to be gained by a bike that not only mixed wheel sizes, but also had a geometry designed from the ground up specifically for the mixed wheel platform. My ride review below will elaborate on those benefits; you can also read Mullet’s pitch here.

Editor’s note: Mullet chooses not to share specific geometry specs like head tube angle, wheel base measurements, etc. for the Honeymaker, arguing that information is essentially their secret sauce.

What was old is new

First of all, Mullet’s first offering, the Honeymaker, is a hardtail. There are no fancy suspension designs here. Second, while still on the exotic side, titanium frames are nothing new. At first glance, the elevated chainstays jump out, but those who have been mountain biking a long time will recall similar bikes. True to Mike’s design philosophy, the elevated stays aren’t there for aesthetics or retro appeal, they are there for functional reasons. The same goes for the straight line that runs continuously from the headtube to the rear axle. 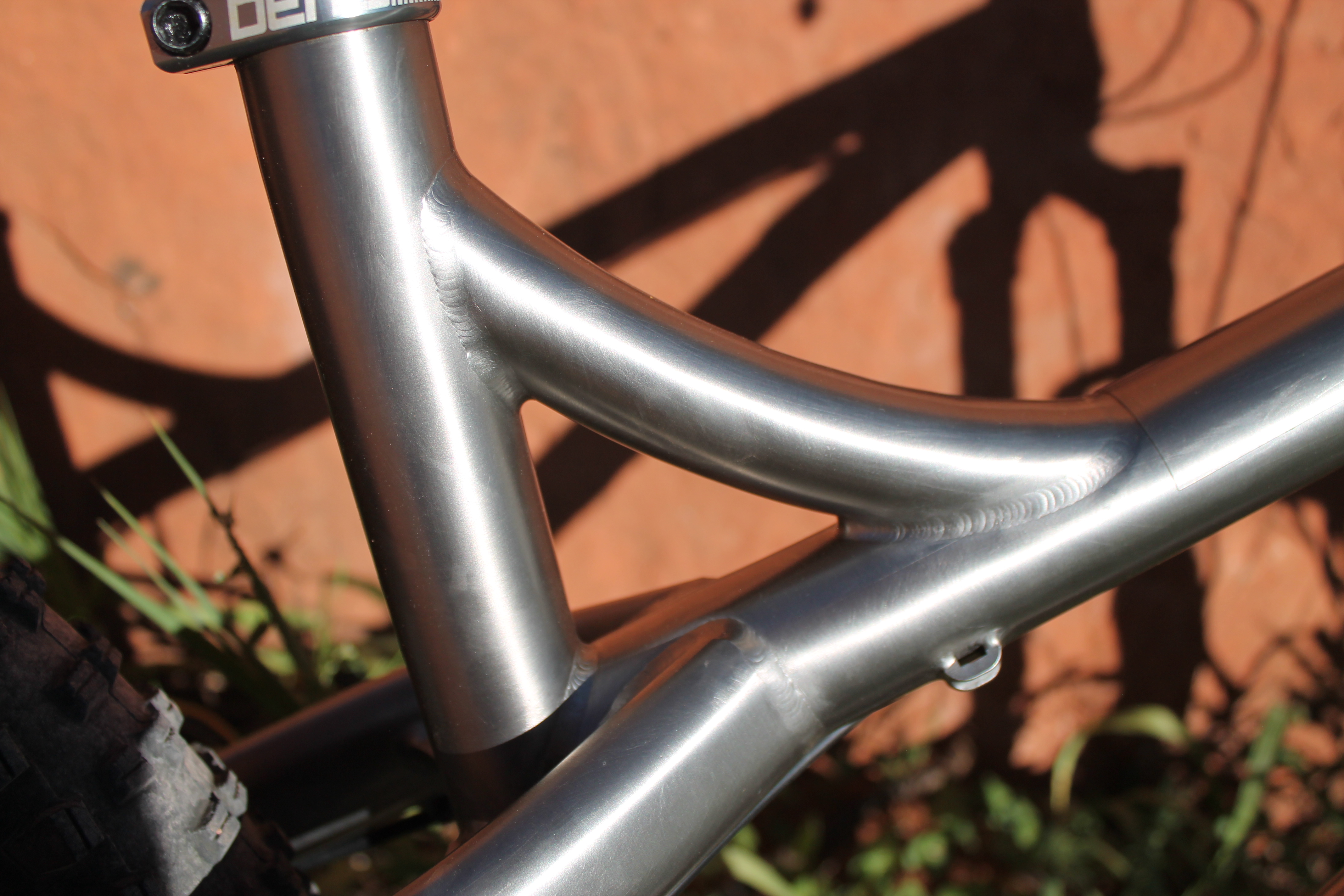 The Honeymaker accepts both standard and plus-size tires. The frame is also capable of running a 200mm dropper post. But the biggest “new” feature of the Honeymaker is fully optimized, mixed-wheel geometry. Mike built his first mixed wheel bikes from the ground up and the results were immediately evident. With the Honeymaker, Mike, Miles, and Mullet have reached for, and I believe achieved, the perfect symbiosis between wheel size and geometry.

As you can expect by my preceding experience, I entered this review period with very high, maybe unrealistic, expectations. I did my best to hold those expectations in check, largely due to the fact that I was moving from a 160mm full suspension, mixed-wheel bike to a hardtail. I was also curious to see if the mixed wheel magic would translate to plus-size tires.

One thing I learned from my first mixed wheel bike is that they need not be a compromise. As previously noted, the first modern mixed wheel bikes hoped to accomplish no more than a compromise between big wheel rollover and little wheel maneuverability. This meant they were expected to roll over better than a bike with 26″ wheels but not as well as one with 29″ wheels. Similarly, the idea was they would maneuver better than a 29-inch-wheeled bike, but not so well as a bike with 26″ wheels.  These early bikes largely achieved that, but my first Vidovich-designed bike broke that mold. It turned not only better than a full 29er, it also turned better than a bike with 27.5″ wheels or even one with 26″ wheels. The mixed-wheel design, when properly applied, required no compromise whatsoever in maneuverability, and it did so without giving up anything in rollover prowess.

I was also stoked to see how well the mixed wheel design adapted to plus-size tires. Plus-size tires are necessarily less nimble than standard tires, but the super-fast and ultra-precise mixed-wheel steering more than compensated, yielding yet another level of no-compromise shredability. Hitting Colorado Springs’ most famous superfast downhill twisty routes, Captain Jack’s and The Chutes, I smashed my PRs on both segments the very first time I ventured in on the Honeymaker. Those times are compared to my current 160mm mixed wheel enduro bike.  Within a quarter mile down Captain Jack’s, as I began rocketing around the corners, I felt like Will Smith when he commandeered the alien space ship in Independence Day.

The first thing I noticed with the new Honeymaker is that not only does it maximize that capability, but it also maximizes other capabilities without compromise.  First, and foremost, for a rider like myself who has never liked the necessary tradeoff between wanting a low bottom bracket for railing corners but a high bottom bracket for rock pedaling, the Honeymaker was a revelation. The Honeymaker has a higher bottom bracket than today’s breed of long, low, and slack bikes, but the mixed wheel design means it gives up nothing in terms of cornerability. In fact, where my current mixed wheel bike out corners anything I’d previously ridden, the Honeymaker even out corners my current bike! What’s more, I never found myself banging cranks in rock gardens or on technical climbs. This bike is a technical climber’s dream!

Another benefit of properly-designed, mixed-wheel geometry is that it provides a measure of endo insurance. With the front axle higher than the rear, the bike is naturally resistant to rotation around the front axle. Riding the Honeymaker, a hardtail outfitted with a 140mm fork, I was every bit as comfortable hitting drops and rollers, including large square edged step downs, as I would be on any 160mm, full squish, symmetrical-wheeled bike. The proper mixed wheel geometry naturally places the rider in a perfectly balanced attack position, making grabbing air, especially sudden and unexpected air, much more comfortable. While it may seem counterintuitive at first, that same axle placement and natural weight distribution makes lofting the larger front wheel easier, making step-ups a breeze and further enhancing the bike’s technical climbing capability.

Speaking of comfort, the titanium frame does a nice job damping trail vibration. While titanium has long been prized for its relatively light weight (as compared to aluminum or steel, not necessarily carbon), the Honeymaker is no cross-country featherweight. It is designed to get rowdy day after day, which it does not only exceptionally well, but with an added measure of comfort relative to other hardtails. As you might expect, this comfort is further enhanced with the installation of the plus-size tires. It was easy to spend hours in the Honeymaker saddle hitting rugged terrain and not feel beat up at the end of the day.

It’s also worth noting that the straight line top tube provides superb standover, making it a joy to throw around both on the ground and in the air.  If you were to get in over your head on this bike, which is unlikely, jettisoning it and saving yourself would be a snap.

The bottom line is that, as a riding platform, the Honeymaker frame makes zero compromises associated with standard, symmetrical-wheeled bikes and actually exceeds them in multiple areas, including those that are considered to be areas of mutually exclusive tradeoffs. It’s great if you want a bike that rails corners like a low, long, and slack modern geometry bike but places you high enough that you need not worry about banging cranks or having to ratchet pedals at every obstacle. In the end, the Honeymaker meets all of Mike Vidovich’s visionary requirements for something new; it is faster, it is safer, and most importantly, it is more fun.

While the Honeymaker frame is everything I had hoped it would be, and then some, the standard build kit could use some changes. The one choice that’s really praiseworthy for this bike is the Industry 9 wheelset that performed flawlessly and took whatever a Honeymaker rider could possibly dish out. Aside from that, other components seem to hold the bike back. With their small, closely placed knobs, the WTB Trail Boss tires failed to allow the Honeymaker to truly run free, especially in any tread conditions other than hardpack. The Magura Vyron wireless dropper post was unreliable in both directions. The Box drivetrain, especially the shifters, lacked the crispness of comparable level SRAM or Shimano components. Mullet needs to put the exact same level of performance-oriented thought into their standard build kit as they do their frame design.

The good news is that in addition to the standard build kit ($3,995), Mullet offers the Honeymaker in a frame only ($1,599) and will happily provide a custom build as well.  Anybody in the mood for a hardtail, or just an astonishingly high performance all around bike, would do well to look up Mullet. And while performance is king, the bike being seriously gorgeous, unique, and drool-worthy is just icing on the cake. 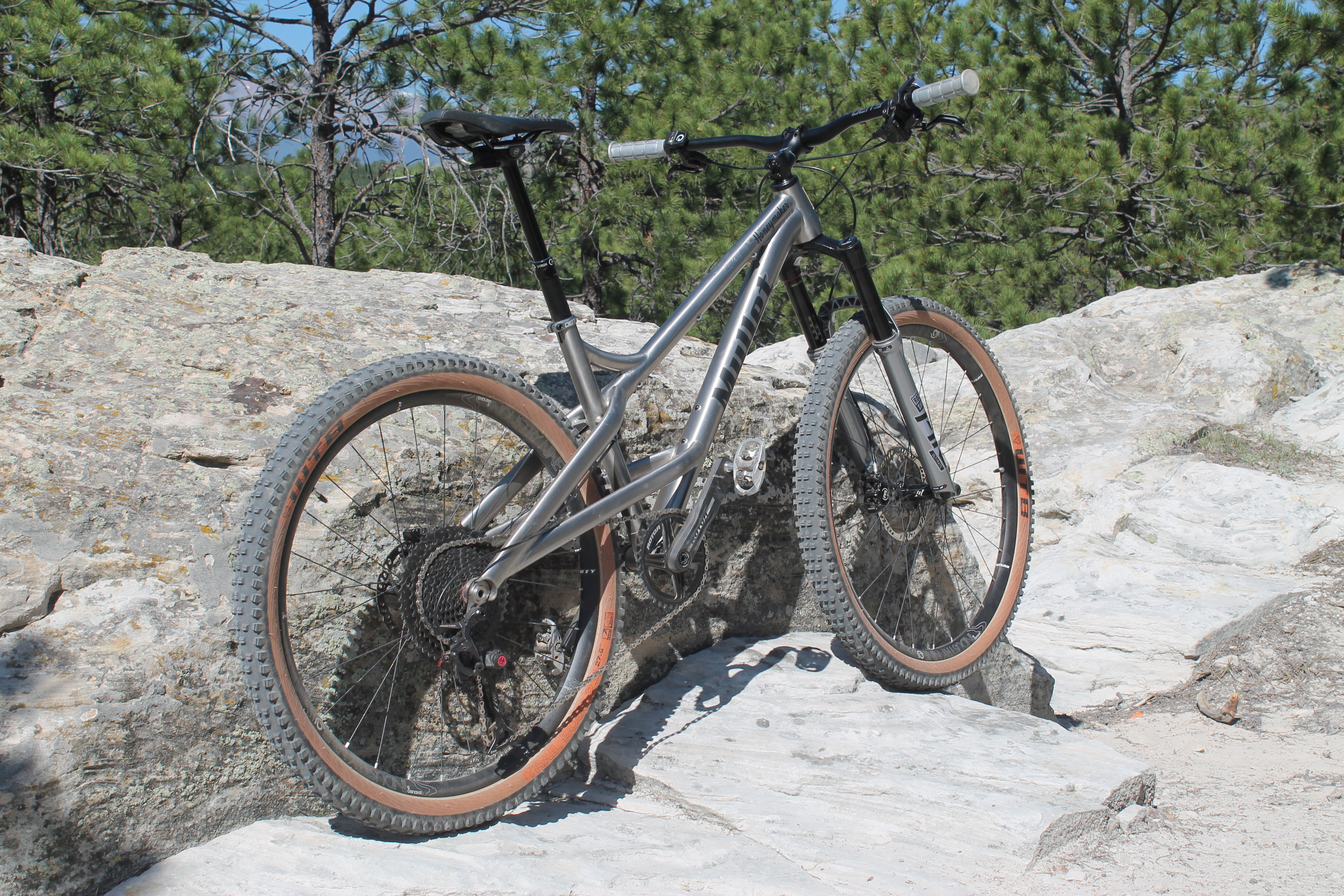 Thanks to Mike, MIles, and Mullet for giving us the first crack at the Honeymaker.