In many ways, enduro represents the pinnacle of mountain bike engineering. Enduro bikes are designed to be lightweight enough to pedal uphill while remaining extremely capable on the descents. The only problem is, doing both makes them expensive.

Marin bills the San Quentin, a new hardtail model for 2019, as an enduro / light dirt jump / downhill trail bike at an affordable price. It’s a hardcore hardtail said to be a mashup of a dirt jump and trail bike, which sounds unique to say the least. I had to try it for myself.

I find it helpful to compare a bike to others in the same category, but the San Quentin is in a category all its own. It’s got a slack head tube angle (65-degrees) like an enduro bike, but it’s a hardtail with *just* 130mm of front suspension. Unlike the latest enduro bikes, the San Quentin is designed around 27.5-inch wheels (not plus, and not 29er) yet it’s got a Boost-spaced rear end and is specced with a beefy 35mm diameter stem and wide, 780mm bars.

Looking at the geometry numbers, it’s clear Marin has an eye toward modern trends. The reach on the size large frame is 464mm compared to 458mm for the average (full suspension) trail bike among the 2018/2019 models we recently sampled. This is certainly in keeping with the longer part of the longer, lower, slacker mantra. And if this bike were any slacker, it would be in detention with Marty McFly.

The full geometry numbers are presented below.

The San Quentin is available in four frame sizes which Marin says should fit riders between 5’4″ and 6’2″. I’m about 6’3″ tall, so I opted for the XL frame which, not surprisingly, felt a little small in some ways. More on that later. 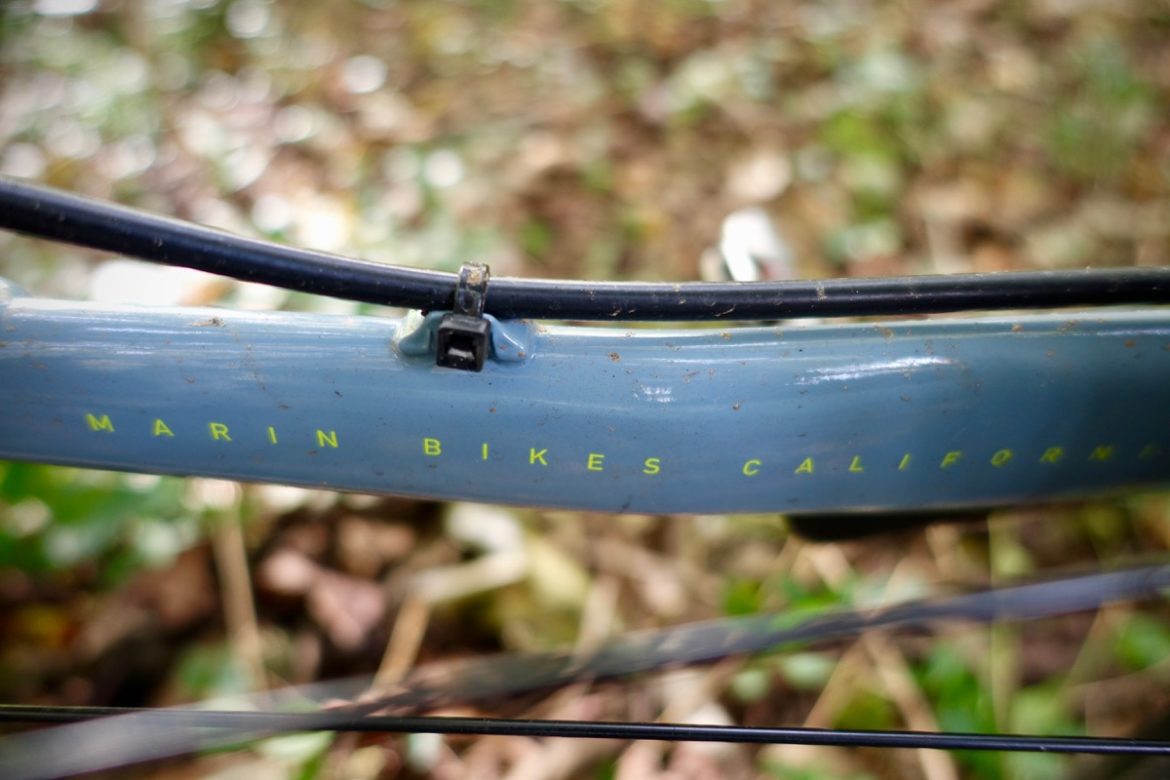 Despite the budget-friendly pricing, Marin was able to include many nice touches on the double-butted aluminum frame including internal routing for the shifter cable and dropper post plus ISCG 05 mounts. The rear stays are set wide and appear to offer enough room for plus tires, though this is not officially supported. There are mounts for a single bottle cage, though sadly not for two.

Marin offers three different builds of the San Quentin, with prices starting at $849 for a complete bike, and going up to $1,899. I tested the middle build, the San Quentin 2, which retails for $1,299 USD.

Starting at the front, the San Quentin 2 comes with a 130mm RockShox Recon RL which features adjustable rebound and compression.

The 27.5-inch wheels use Marin-branded, double-wall rims. With an internal rim width of 29mm, the stock wheels should work with the more aggressive 2.5- and 2.6-inch tires many riders are choosing to run these days. The wheels are tubeless-ready, though my test bike shipped with tubes installed. Marin lists Vee Crown Gem tires on their website, but mine came with 2.35-inch Schwalbe Hans Dampf tires.

The number two build also features Tektro hydraulic disc brakes with 180mm/160mm rotors front/rear and an 11-speed, SRAM NX drivetrain with an FSA Comet crankset and SunRace cassette. This mix-and-match approach appears to be driven by cost savings, but based on my testing, there doesn’t seem to be a noticeable performance hit.

The cockpit uses a 35mm diameter alloy bar and stem combo, and Marin went with 780mm bars in keeping with the focus on aggressive descending. Unlike the top-of-the-line build, the San Quentin 2 comes with a fixed seat post, which is definitely NOT enduro.

Personally, a dropper post is a must-have, but to get one stock on the San Quentin means dropping another $600 for the San Quentin 3. So, I ordered a KS E30-I (~$200 MSRP) at the same time I ordered the San Quentin to get the build I wanted. Another affordable choice is the PNW Ranier IR, which retails for $199.

The stock XL bike, without a dropper post, pedals, or tubes, weighs about 28.5 pounds. With a dropper and Crankbrothers Eggbeater pedals, my build weighs just shy of 30 pounds.

After setting the San Quentin up with a dropper post and pedals, I swung a leg over for a quick parking lot shake down. Despite the fact that it’s a hardtail, the bike immediately feels enduro, from the wide handlebars to the slack front end and the long reach. Put another way, the bike feels very modern, and if I had been blindfolded I might have guessed I was setting aboard one of the long-travel bikes I tested at Interbike this year.

Since Marin bills this as a bike built for downhill trails, it’s only proper to start with its descending capabilities. It turns out the San Quentin is a very capable descender thanks to the slack geometry and 130mm of front travel, and the wide bars are welcome too. I had no problem tackling steep drops, and navigating tight, technical descents was a joy thanks to the 27.5-inch wheels.

However, the key to unlocking the bike’s full descending capabilities is the addition of a dropper post. I honestly can’t imagine riding this bike (or any other for that matter) without one. The San Quentin, in particular, feels dodgy on descents with the seat post at full extension, no doubt due to the steep seat tube angle which lends a distinct over-the-bars feeling.

The RockShox Recon RL fork is a budget fork, and it turns in a budget performance. I found it to be mushy and struggled to find a sweet spot.

One thing to remember about a hardtail — any hardtail — is that high speed, technical descents are going to be a challenge. The rear wheel just won’t track the trail very well, and it’s easy to get bounced offline at speed. The San Quentin isn’t a bike to race enduro, but it is a great choice for riding fast on smooth trails or dirt jumps, or methodically picking lines down a steep, gnarly trail.

It’s easy to get the San Quentin into the air and the slightly-shorter-than-average chainstay length makes this a playful bike on the trail or sessioning in a parking lot. I’m still perfecting my wheelie, and with the seat slammed down I have no problem keeping the front end in the air for a few pedal strokes.

Hardtails are generally very efficient climbers, but the 65-degree head tube angle puts the San Quentin at a bit of a disadvantage. I was worried the front end would be tough to keep in a straight line on the climbs, but fortunately I found the wheel tracks well enough.

Still, I found the San Quentin to be a little uncomfortable climbing or pedaling for extended periods. As I said at the beginning, my height places me just outside the recommended range for the XL model I tested, so the bike geo feels a little compressed to me. The relatively short stack, short-ish stem, and slack head tube serve to put the handlebars closer to the seat than I would prefer.

In looking more closely at the geometry numbers, I found the bottom bracket drop is actually less than average for trail bikes. The upshot is the bottom bracket height is a little on the high side, though it doesn’t seem to negatively affect handling. However, this does add to the top-heavy feeling taller riders like myself may experience with the seat post at full extension.

I’ve had to make an adjustment to the 27.5-inch wheels as well, as they take just a bit more effort to roll over objects in the trail. I tested the San Quentin 2 on many local trails where I know every root and log, yet I found myself losing momentum in spots where I normally cruise up and over on a 29er.

There’s no doubt about it: $1,299 is a good price for a modern mountain bike like the Marin San Quentin 2. So what’s the trade-off, and is it even worth the low price?

As I said, the San Quentin 2 doesn’t come with a dropper post to keep the price affordable, and without one, it’s really not a complete bike. The suspension performance is lacking as well, and after putting more than 100 miles on the bike, I’ve had some minor wear items crop up like a creaky bottom bracket and a slightly out-of-true rear wheel.

I quickly flatted both tubes that came installed and went tubeless, but the front tire has a slow leak I haven’t been able to troubleshoot. Whether it’s an issue with the tape job, or the valve stem I had lying around my parts bin, or even the tire, I have no idea. If this is your first tubeless wheel, don’t worry — this can happen with almost any set up.

Bottom line: The San Quentin 2 is definitely worth the price, even if you end up adding a dropper post. And if you’re buying this bike with an eye toward upgrading parts down the line, there’s a good chance the modern geo will stay modern, at least for the next few seasons.

Who is it for?

This is an interesting question, since the Marin San Quentin doesn’t really fit into any of the traditional mountain bike categories. Based on the price and its focus on gravity riding and dirt jumping, I would say the San Quentin is a great choice for young riders just starting out who want to mess around and build solid skills.

It’s also a fun option for riders who are interested in dabbling in more aggressive riding, but don’t want to throw down for a fancy full suspension bike.

It’s not quite a do-everything bike due to its climbing performance, but for a weekday rider, this bike (and its price) is hard to beat.

Thanks to Marin for loaning the San Quentin 2 for review.