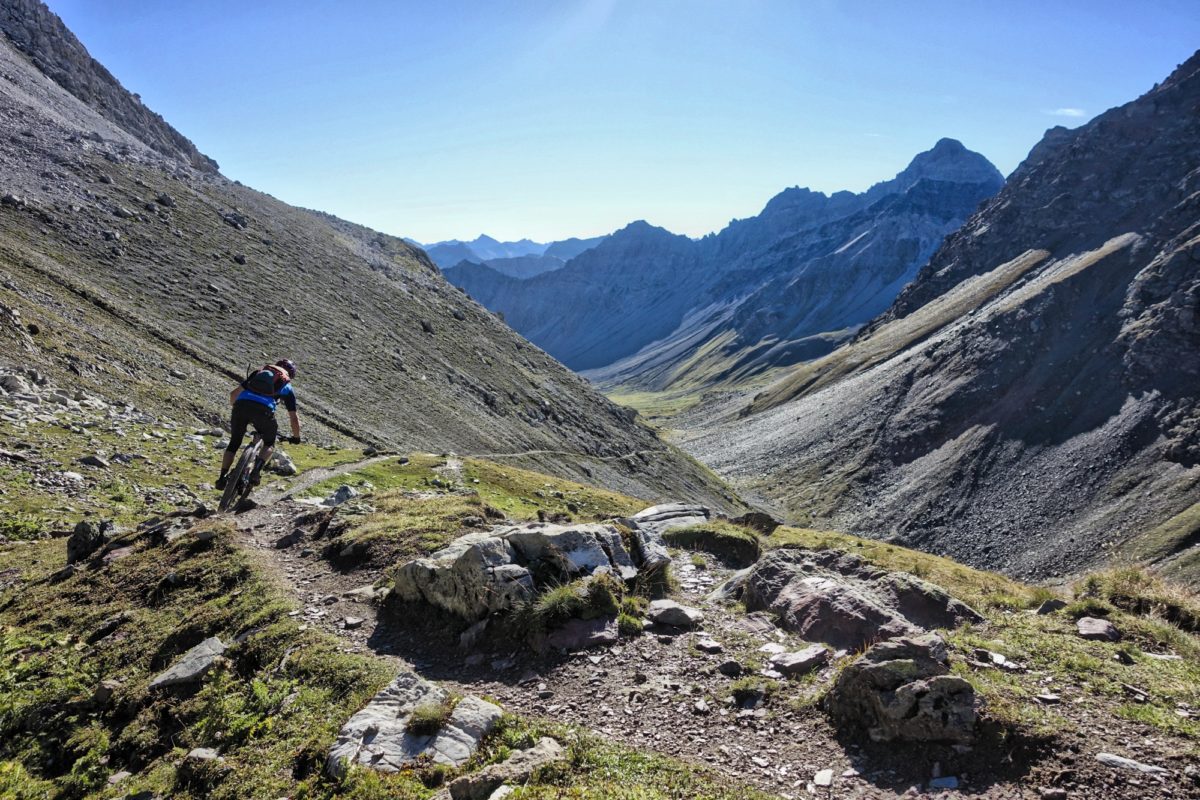 Have you ever heard a friend tell you a tale of an epic trail, and knew that you just had to go and experience that mountain bike ride for yourself?

That’s exactly how my first trip to Switzerland began.

I was sitting at a brewery in Colorado chatting with a friend of mine, Zack Vestal of Scott Sports, over a beer, and he told me about this epic mountain bike ride that he’d done in Switzerland a few weeks earlier. This ride was one massive loop consisting of multiple chair lift rides to gain the majority of the elevation. As Zack told it, you’d ride up one lift to the top of a mountain, bomb down epic, gnarly singletrack to another lift, ride up that one, drop down into the next village over (with plenty of opportunities to stop for wine and cheese along the way) and repeat–until you’d traversed almost 50 miles of epic European singletrack in the Alps, only having to do a couple thousand feet of human-powered climbing!

It just so happened that I was already working on plans for a European mountain bike tour, and I was looking for some epic destinations to hit. A few emails later, and I was heading to Lenzerheide, Switzerland to check out this epic lift-served loop myself!

I Got a Ticket 2 Ride 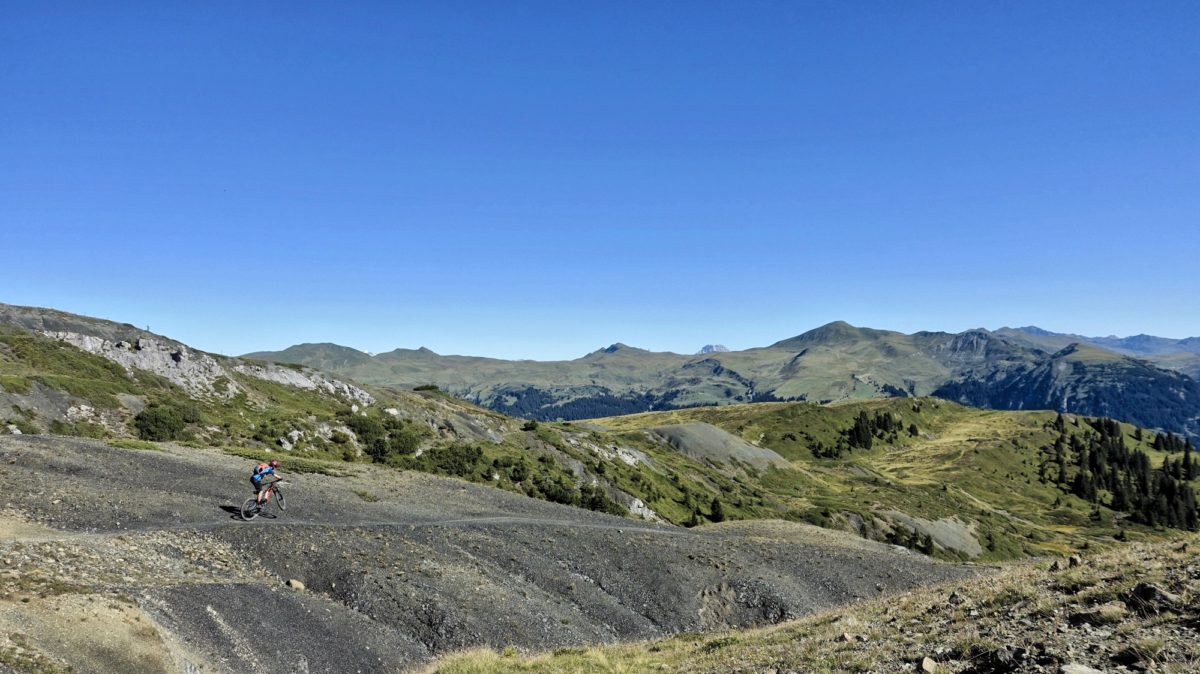 While the Beetles told us “she’s got a ticket to ride, but she don’t care,” I got myself a ticket to ride, and I really did care! The ride that Zack had told me about is called the “Bicketicket 2 Ride Tour,” and there are three different lengths and technical difficulties available: blue, red, and black.

We don’t use red difficulty ratings in the United States, so if you’re converting to US difficulty ratings, it’d be best to think of “red” as a single back diamond difficulty, and “black” as a double black diamond rating. This conversion isn’t perfect across the board… in some places, red is more of a blue/black blend. But if you’re in doubt, check the Biketicket 2 Ride website for details on length and amount of climbing for each version. But if you do bite off more than you can chew, it’s very easy to cut the ride short.

Naturally, I signed up for the Black tour… but a bit apprehensively, as the website describes it as “the mother of all enduro tours” with 2,300 feet of climbing and a total length of just over 40 miles. However, that 2,300 feet of human-powered climbing, combined with the lifts, offers up almost 20,000 vertical feet of descending! I’d call that a solid reward for the effort.

Getting your own ticket 2 ride will cost a few bucks: 69 CHF, or about $68 USD. But that $68 gets you day tickets to three different resorts: Lenzerheide, Arosa, and Chur, allowing you to do as much lift-served riding in this entire region in one day as you can possibly squeeze in.

The tour is designed to be self-guided, complete with paper maps denoting the route and a downloadable GPS track. However, I met up with Beni Ott of Bikeschule Lenzerheide for some help navigating the route and shooting some photos.

Get on Your Bike and Ride 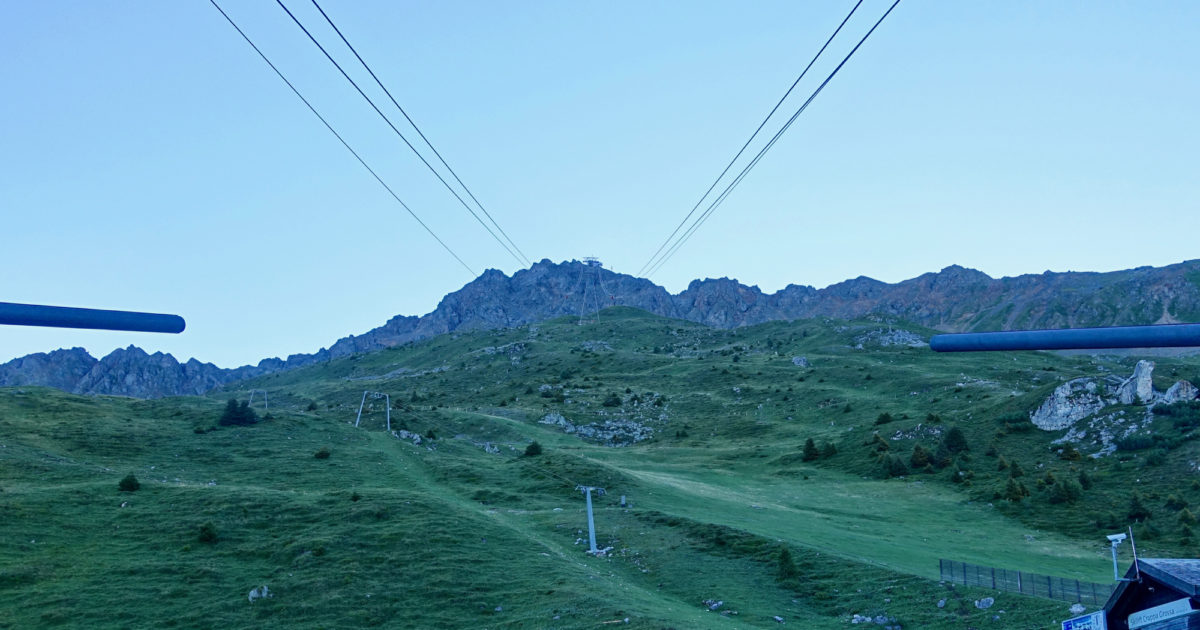 I decided to pass over The Beetles and take some advice from Queen instead, to “get on my bike and ride!” Beni and I met up at the Pesko bike rental shop at the bottom of the Rothornbahn lift to pick up my Rocky Mountain rental rig. 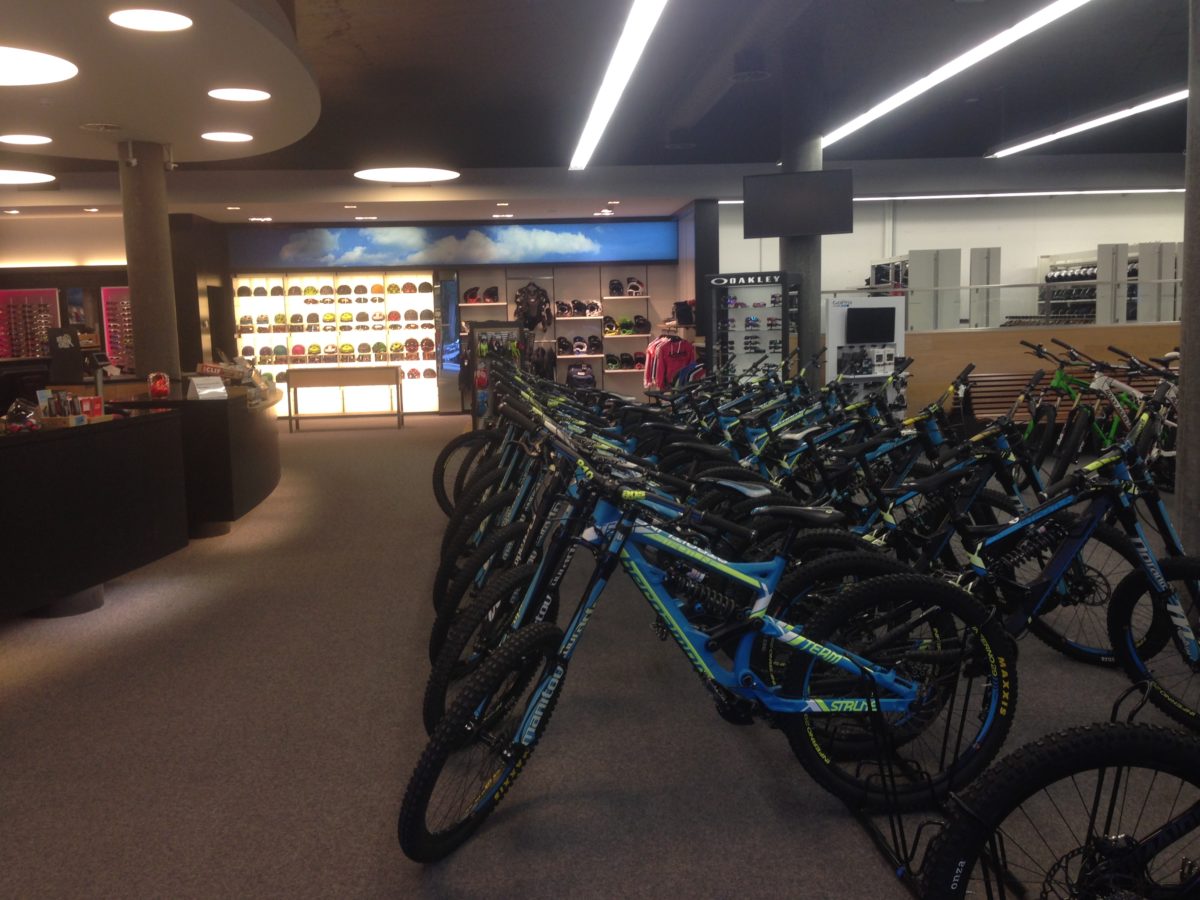 Right at lift open, a two-lift series of a gondola and cable car whisked us from Lenzerheide in the valley floor, all the way up to the top of the mountain ridge towering above us. After only a thousand or so feet of elevation gain, we quickly left tree line behind and were whisked into the high alpine. 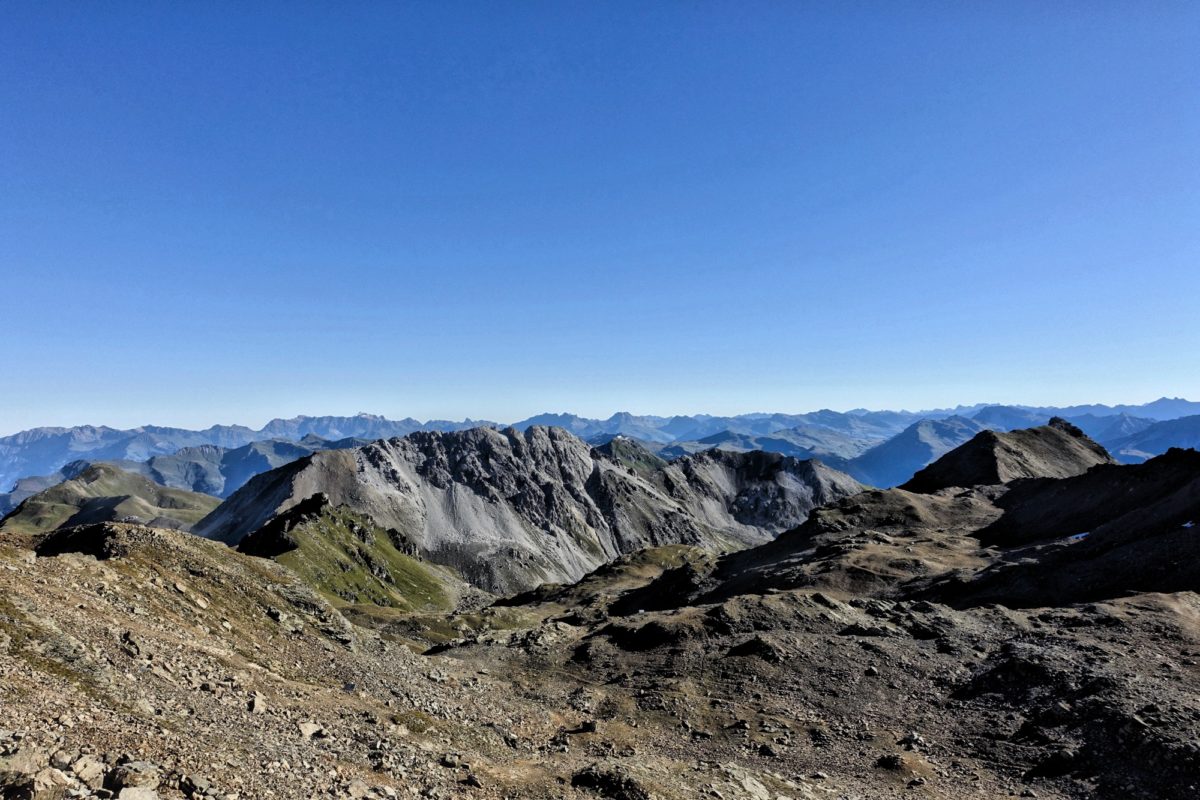 While the Alps near Morzine, France had been gorgeous, the grandeur of the Swiss Alps is unparalleled–jagged rocky peaks spread out into the distance in all 360 degrees from where we stood at the top of the cable car, with many of the distant peaks snow-capped with permanent glaciers. While the Rockies are rugged, if anything the Alps are even more so–steeper, sharper, more jagged. 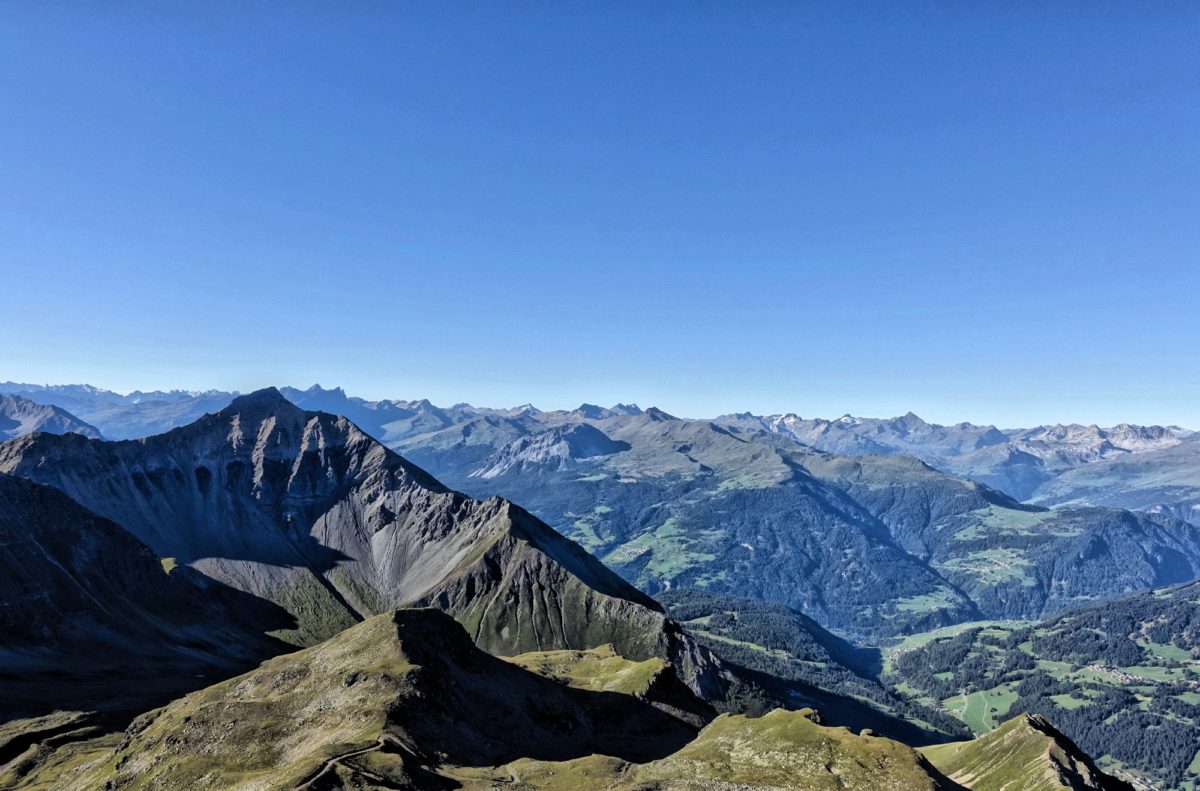 After coasting through a tunnel under a common rock slide and avalanche zone, we picked up the singletrack and without further ado dropped into a fast, technical, ripping descent down toward the Arosa side of the mountain. 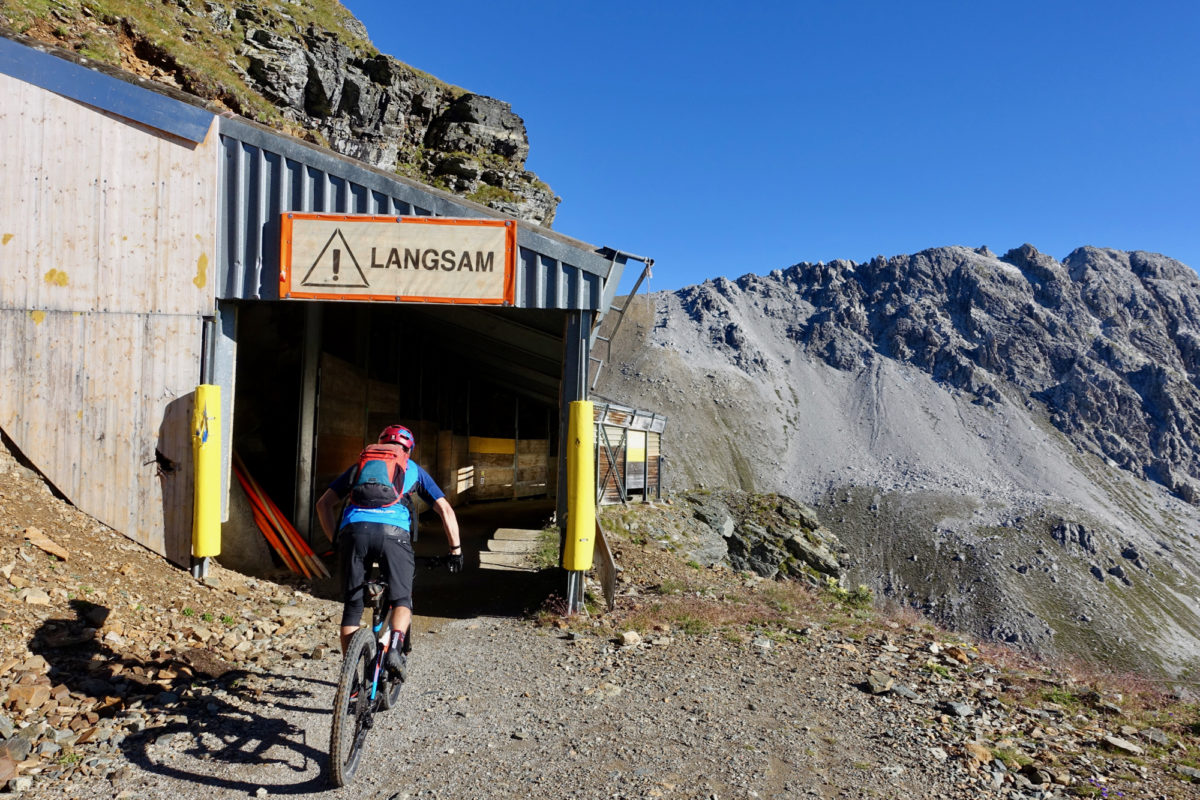 We were so far above tree line that the valley spread out before us, dropping down and around a massive curving corner, without a single tree in sight. Scree, boulders, some green mosses and grasses, the occasional patch of snow, and a trickling stream were our only company in this harsh, unforgiving, yet jaw-droppingly beautiful landscape. 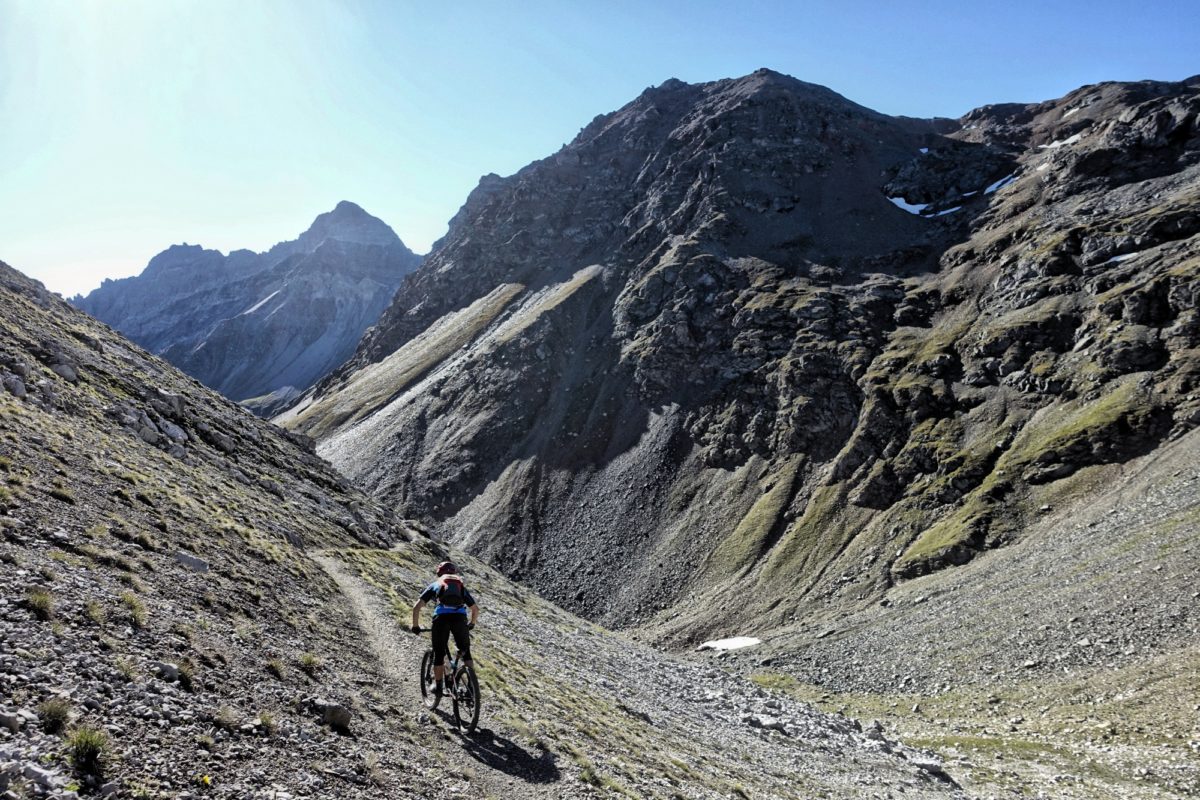 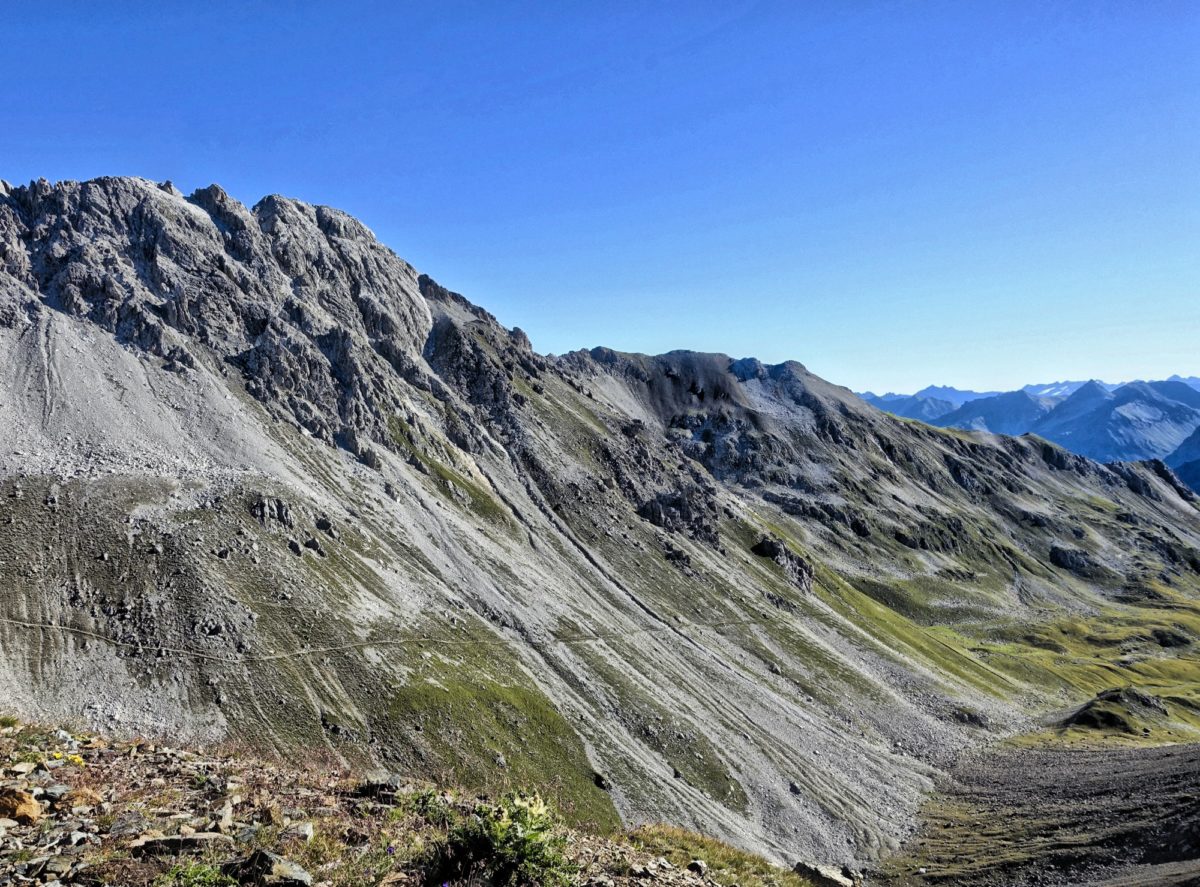 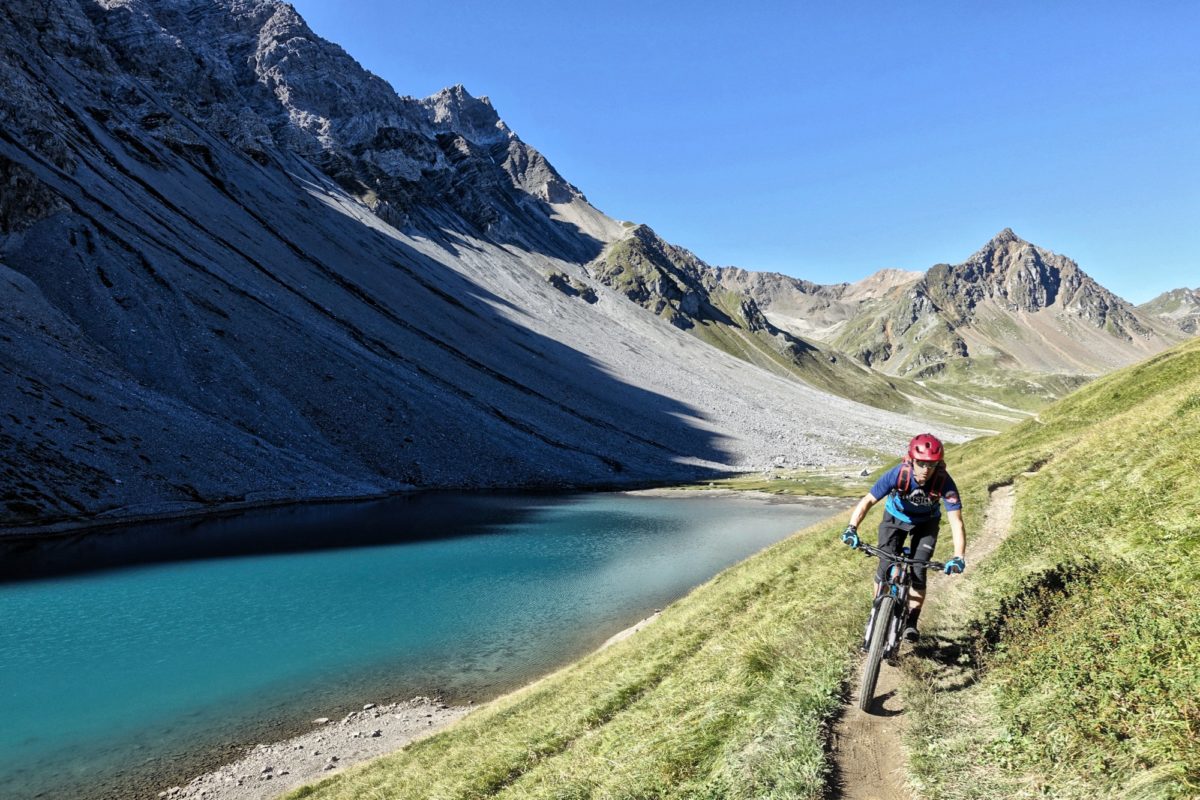 After blasting down the Arosa side of the mountain, another lift ride brought us to yet another sweet stretch of high alpine singletrack. 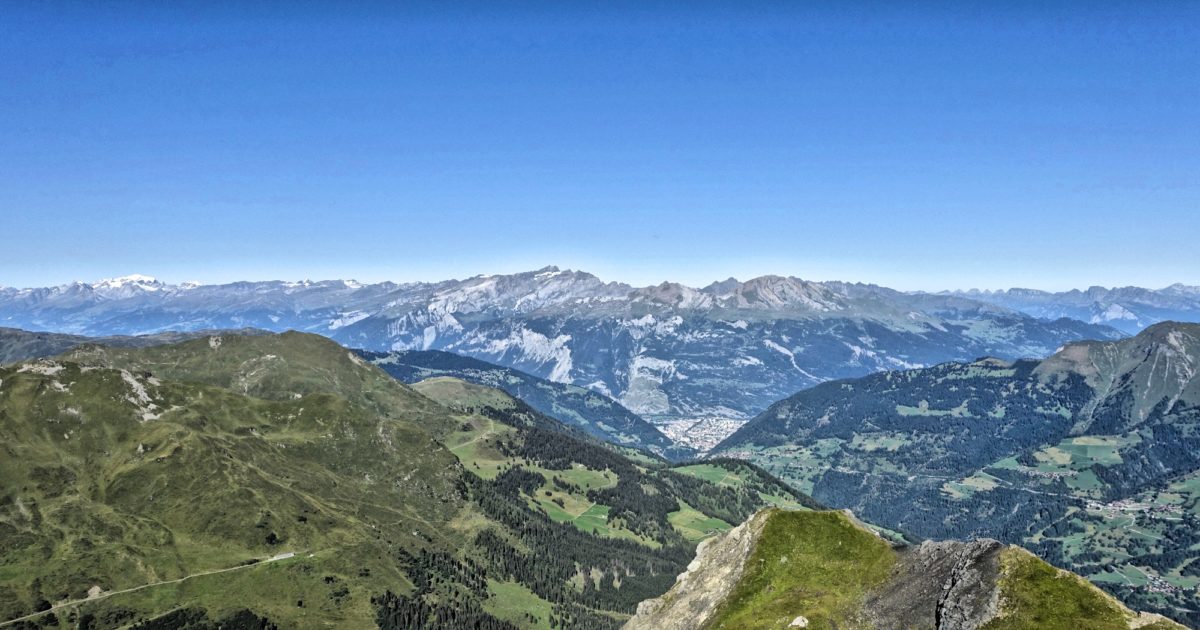 This time, some rock gardens led into fast, flowing stretches of dusty trail that seemed to be straight out of a freeride movie.

From the top of this lift in the Arosa zone we would make our way all the way down to the city of Chur–the low point of the route at about 2,200 feet of elevation. (Lenzerheide is at roughly 5,000ft.) We would drop a net total of 6,400 vertical feet from the top of this lift to Chur, far out of sight below, but over the course of about 17 miles. And during those 17 miles, we did most of the pedal climbing for the route.

After the high speed, high alpine singletrack, we used up some dirt roads to work our way across the mountainside. Along the way, Beni pointed out where the normal Black tour goes, but we decided to tack on a little extra paved climbing to access a similar, but in Beni’s opinion, much better, singletrack descent.

Now down in the trees, the feel of the terrain changed dramatically. If anything, the trails got even steeper, and on top of the rocks, slick mud and large tree roots provided an extra dimension of challenge to the trails. But where it weren’t wet and muddy, the rich, black dirt provided beautiful loamy turns that begged to be railed! 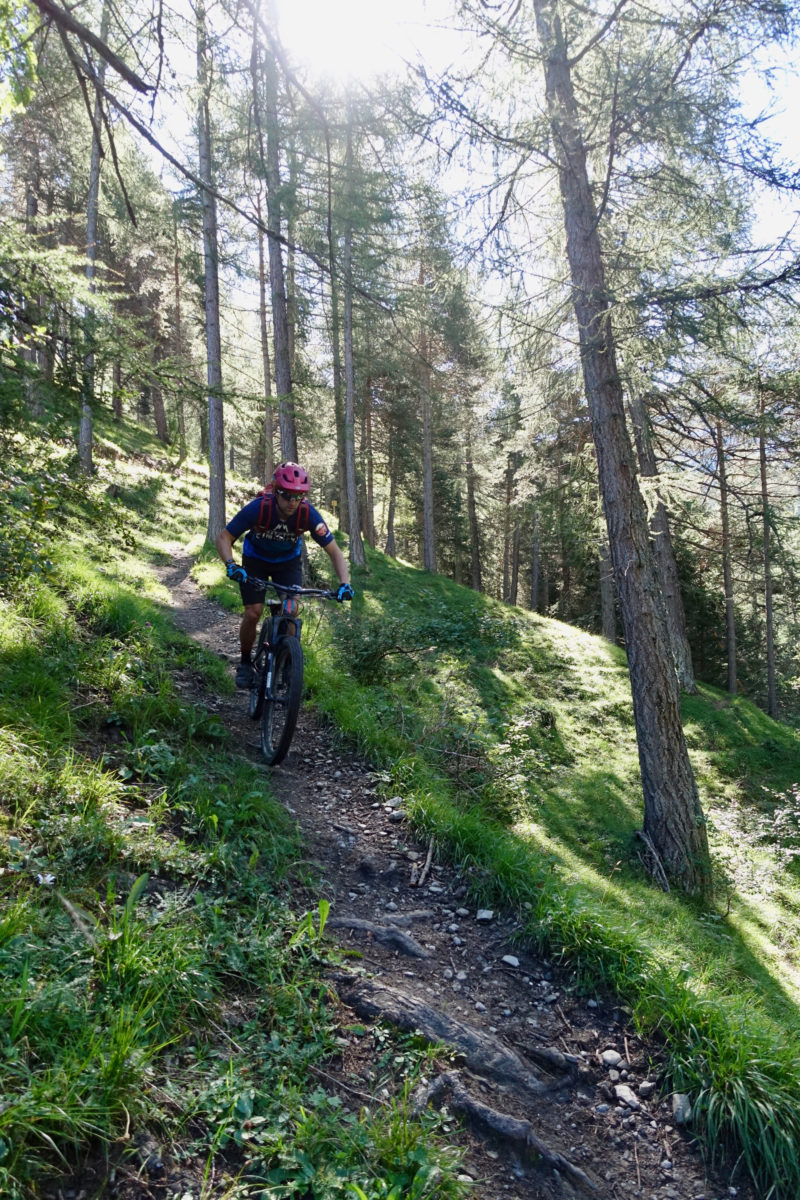 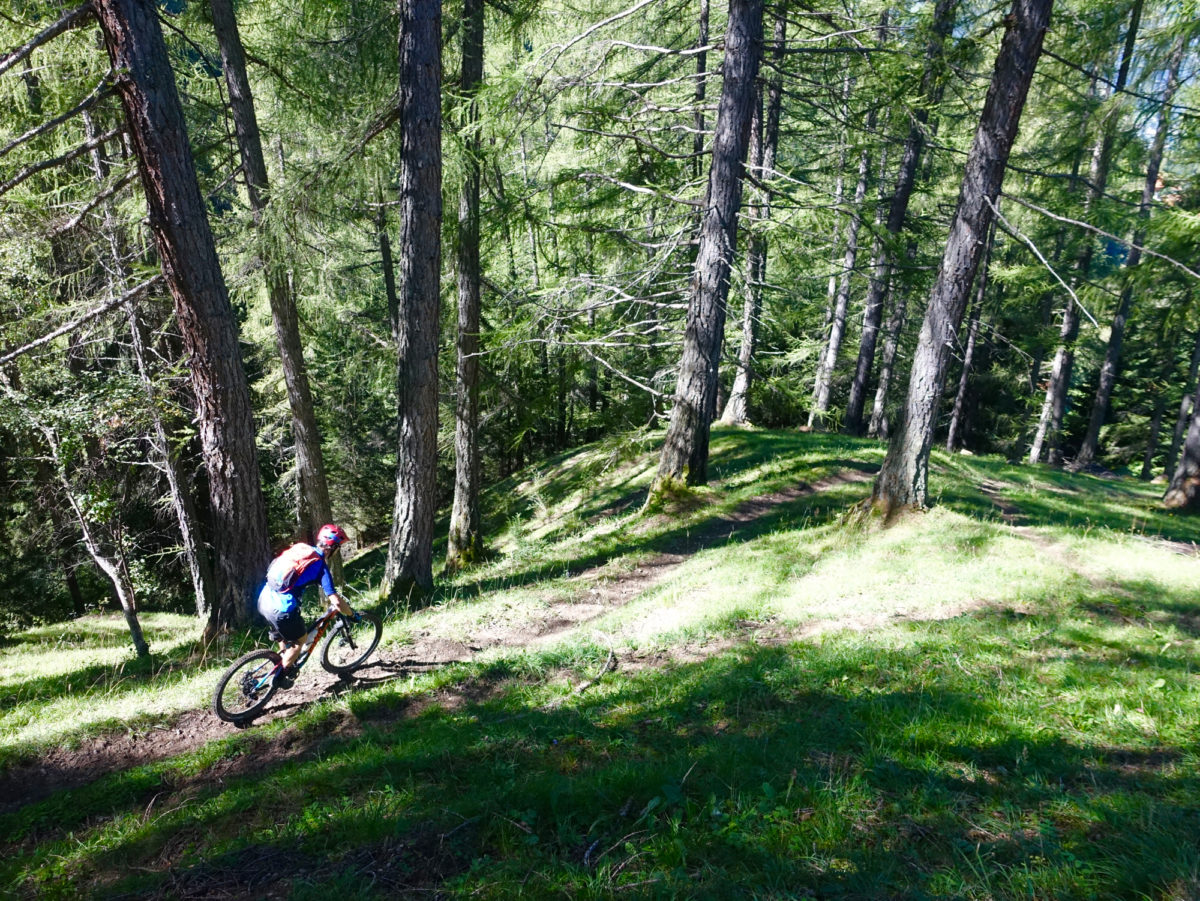 With a population of about 33,000, Chur is a decent-sized city by Swiss standards. It’s the largest city in this region, and is the home of Olympic gold medal mountain bike champ Nino Schurter.

Thanks to the European density of the city, we were able to quickly pedal into the heart of downtown to grab a quick bite to eat, before embarking on the next leg of our adventure.

Our next lift ride was a slow gondola that rose straight out of the town of Chur, stopping at a halfway point before taking a second gondola even higher up the mountain. We shared the lift with some hikers and a bunch of downhillers with full face helmets and big hit bikes. As we looked at the trails below the lift, we could see some gnarly DH lines with some big hits, and some more classic singletrack that seemed to drop straight down the mountain.

“That’s a fun trail,” Beni pointed below us. “It’s really steep, but you could handle it if you’re paying attention. Maybe you could come back here later this week?”

While the trails below the lift weren’t technically a part of the Black tour, an intrepid group of riders could easily tack on bonus miles in this network, before moving on to with the rest of the tour.

From the top of the gondola, I followed Beni on a highly-customized version of the Black tour, descending a series of marked and unmarked uber-steep, technical, switchbacked trails that descend into the town of Churwalden, halfway between Chur and Lenzerheide.

By the time we had reached the halfway point between Arosa and Chur, Beni had stopped strictly following the route of the standard Black tour. By that point, he’d decided that I was a much more capable rider than those he normally has to guide, so he decided to spice things up by showing me some of his favorite trails, that are way too technical for the average client. At times, I thought they were going to be too technical for me too, as I dropped into steep, chundery switchbacks with water flowing down the middle of the trail, totally blind, just following Beni’s wheel. But on more than one occasion, after I rolled over the edge, there was no option but to just commit and hope for the best. The trails were simply too steep and too slick to consider stopping. Attempting to come to a halt would guarantee a crash, so the best choice was to just commit and figure it out on the way. Thankfully, it worked out!

With the extreme technicality of these trails and the uber steepness of the mountains surrounding Chur, it’s easy to see how this terrain breeds epic athletes like Nino Schurter.

From Churwalden, we loaded onto another lift, and after a brief pedal we were back in the Lenzerheide area, specifically west of town in the Piz Scalottas zone. 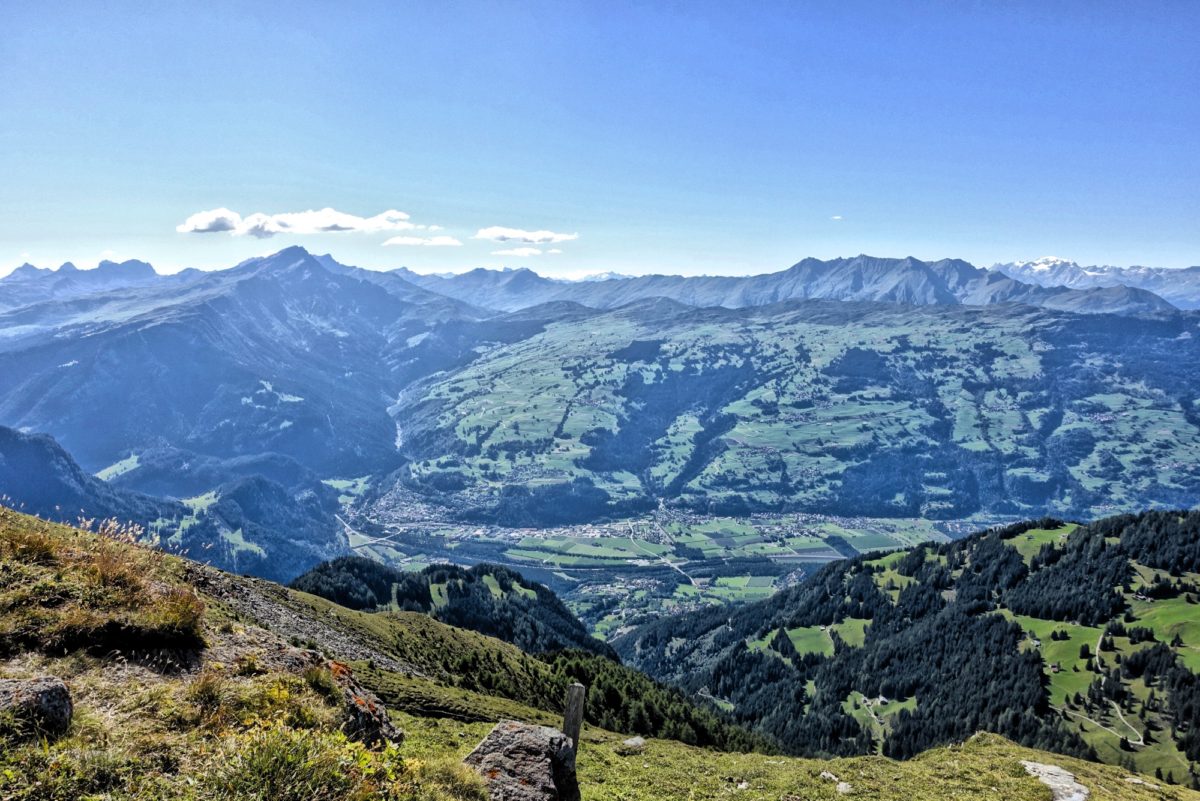 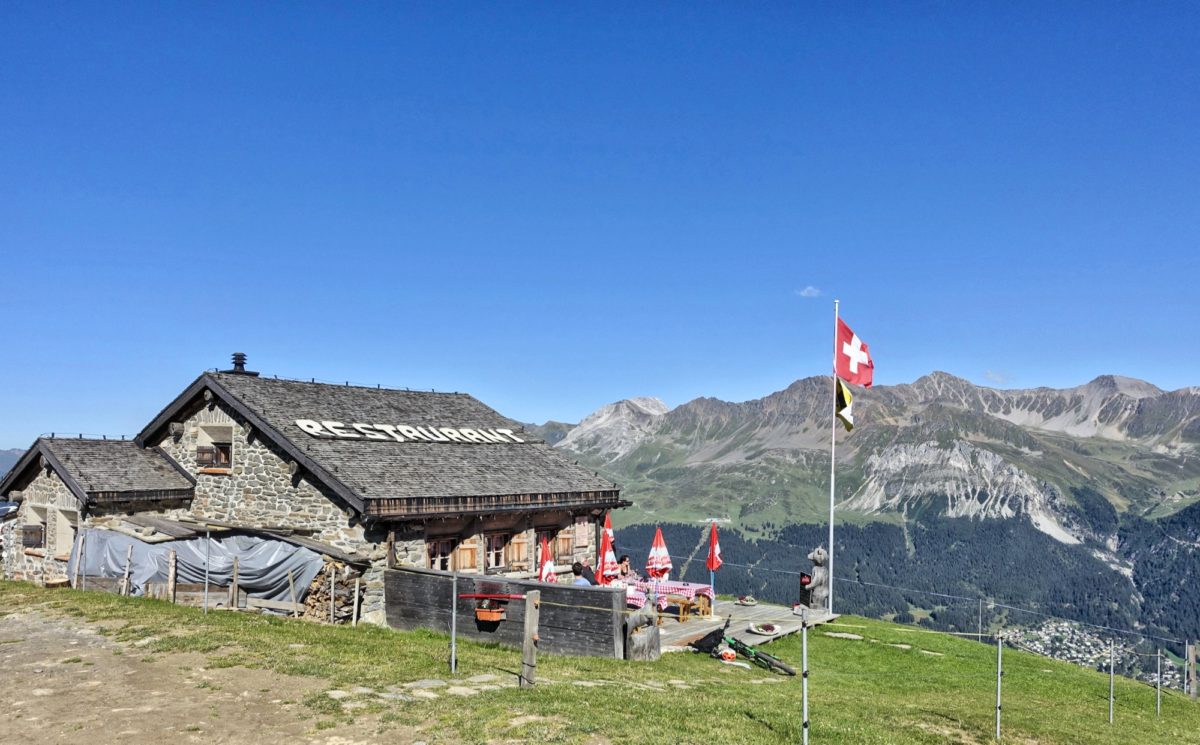 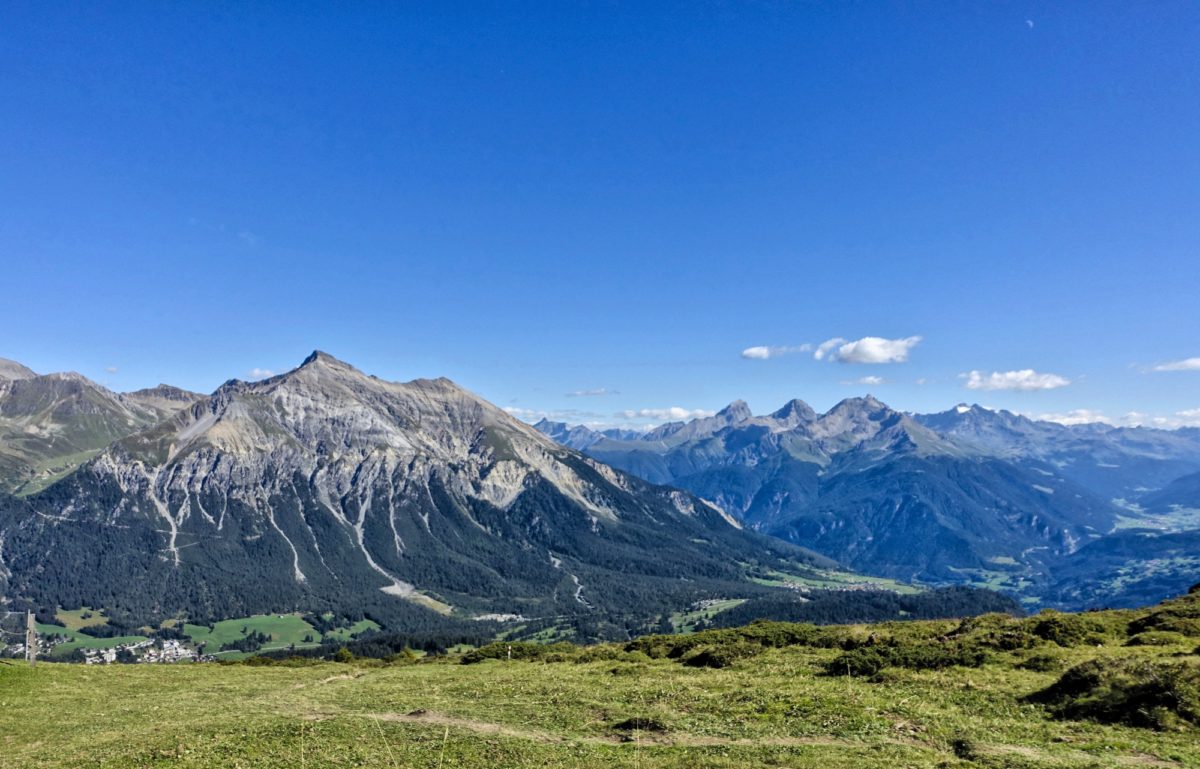 After another two-lift series, I again followed Beni down some steep, technical, and ripping trails, that were really in no way attached to the Black tour. As we rode the lift again, he pointed out on the map some of the more well-marked trails in this zone that are featured in the Black tour that I could explore on my own a different day.

After a couple of runs on the west side of the valley, we decided to call it a day since we had an even harder ride planned for the morning!

By the end of our ride, we had covered about 50 miles (including the lift rides) and descended some 16,500 vertical feet of trail! If we had followed the tour more exactly, we would have gotten closer to the 20,000-foot mark, but I was glad to trade in raw elevation drop for some spicier, hidden singletrack.

Despite not quite making it to the claimed 20,000 feet, Beni noted that he almost never has a client that covers as much ground in one day as we did, despite all the photo stops we made. So if you’re planning to hit up the Biketicket 2 Ride tour and you want to surpass 20,000 feet of descending in a day, you’d better get started as early as possible, don’t stop to take photos, pack a lunch, eat on the lift, and push hard all day long.

While you may be able to take lifts to the top, completing the Biketicket 2 Ride Black Tour is no easy feat!