As mountain bike engineers improve upon the past and push the limits of geometry and capability, compromises become less necessary. In a sense, the Pivot Mach 4 and Mach 429 SL were a compromise for the brand.

For shorter riders, the Mach 4 was a go-to cross-country bike, with low standover height and smaller wheels, fitting riders from 4’11 to over 6’3″.

The 429 SL offered the same snappy, race-ready intentions, but with 29-inch wheels and 100mm travel, 15mm less than the Mach 4. The big wheels pushed the standover height higher though, and was only recommended for riders at least 5’4″ tall. This put racers like Olympian Chloe Woodruff at a disadvantage when the XCO field is full of 29ers. As time has passed, and 29ers have become the predominant wheel size, especially for racing, 27.5-inch cross-country rigs are becoming less commonplace. Cross-country tires, forks, and wheels are harder to find in the smaller diameter too.

The new Mach 4 SL seeks to solve these dilemmas. For starters, the standover height is even lower than it was for a Mach 4. Sizing starts for riders at 4’10” and extends up to 6’7″. It’s available in one 29-inch wheel size, and is at home in a cross-country race or down rock-strewn, technical trails. The Mach 4 SL is available in two different packages: a serious XC build with a 100mm Fox 32 Step-Cast fork, or a more trail-capable build with a 120mm Fox 34 Step-Cast fork.

Of course like any mountain bike update, the Mach 4 SL gets a geometry refresh. Compared to the 429 SL, the Mach 4 SL’s head angle is almost two degrees more slack with both fork options. Also, the seat angle is about 1.25-degrees steeper. The chainstay shrinks quite a bit from 448mm to 431mm. The bottom bracket shifts a few millimeters, but not notably. However the standover height is 3.5-inches lower than the previous 29er.

The Mach 4 SL is even more different from the Mach 4 than the 429 SL. The old Mach 4 builds were available with a 100mm or 130mm travel fork, with 115mm of rear travel (100mm rear for the size XS). The geometry on the older Mach 4 varied by size and ranged from a 68.5-degree head angle on a size XS with a 100mm fork to a 69.5-degree head angle in a size XL. The wheelbase on the Mach 4 SL grew substantially, and so did the reach for a longer, more stable bike, while the seat angle steepened by about a degree over the Mach 4.

About the Mach 4 SL 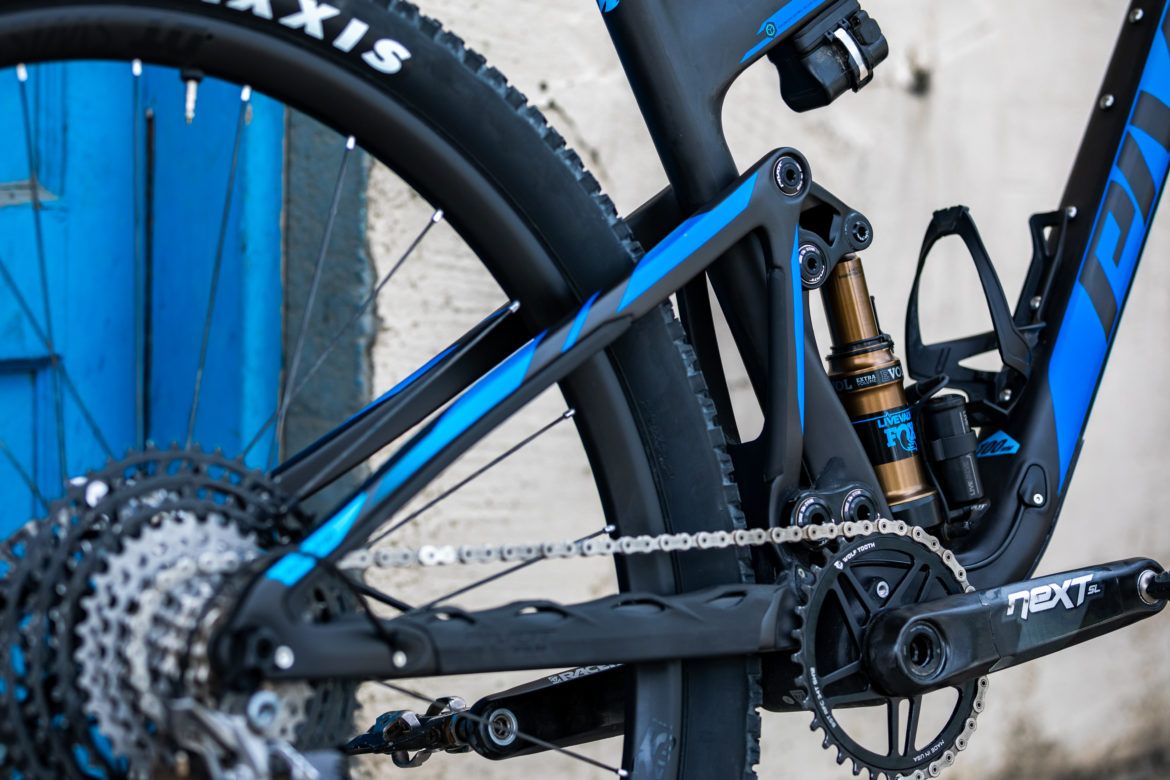 The frame is a complete re-design that departs again from the older, swoopy lines of the Mach 4 and 429 SL frames. Pivot shaved a lot of weight, resulting in a 4lb. claimed weight for the size small frame, and World Cup builds as light as 20.9lbs.

The Mach 4 SL is a 100mm rear travel frame with DW-linkage and different shock tunes specced accordingly. The frame is internally routed for cables and hoses, and is rigged for full Fox Live Valve integration, which is also available as a build option.

Riders should be happy to learn that the Mach 4 SL can fit a water bottle inside the frame across all sizes, even in the XS. A big bottle fits tightly in the XS frame, and comfortably in all other sizes. The XL frame can fit two medium-sized water bottles inside the front triangle. 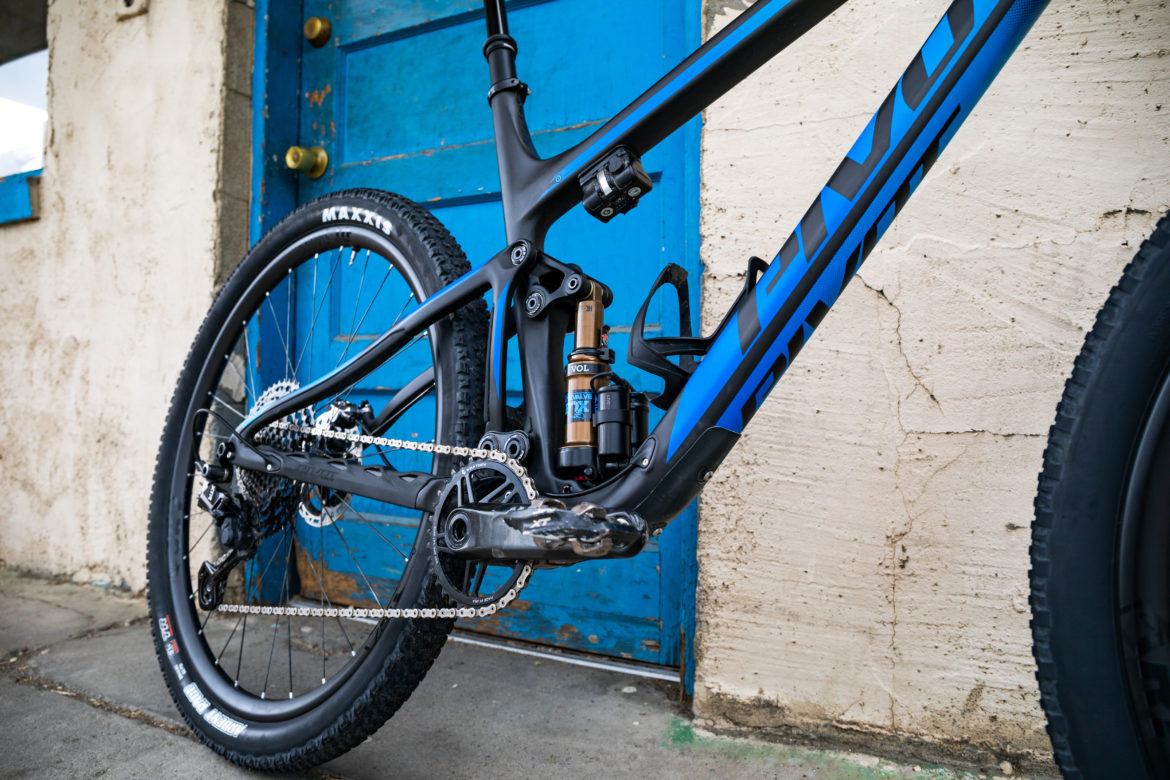 Unlike any other bike in the Pivot line, the Mach 4 SL has a vertical shock layout. This allows better Live Valve integration, water bottle storage, a more compact frame with less material, and better standover height.

Pivot build kits and frame prices start at a premium. The brand uses aluminum sparingly, and the Mach 4 SL will be available only in carbon. A frame set starts at $3,400 for the frame and shock, and there are also options to buy a frame with a fork, or a frame, fork, and Fox Live Valve combo. 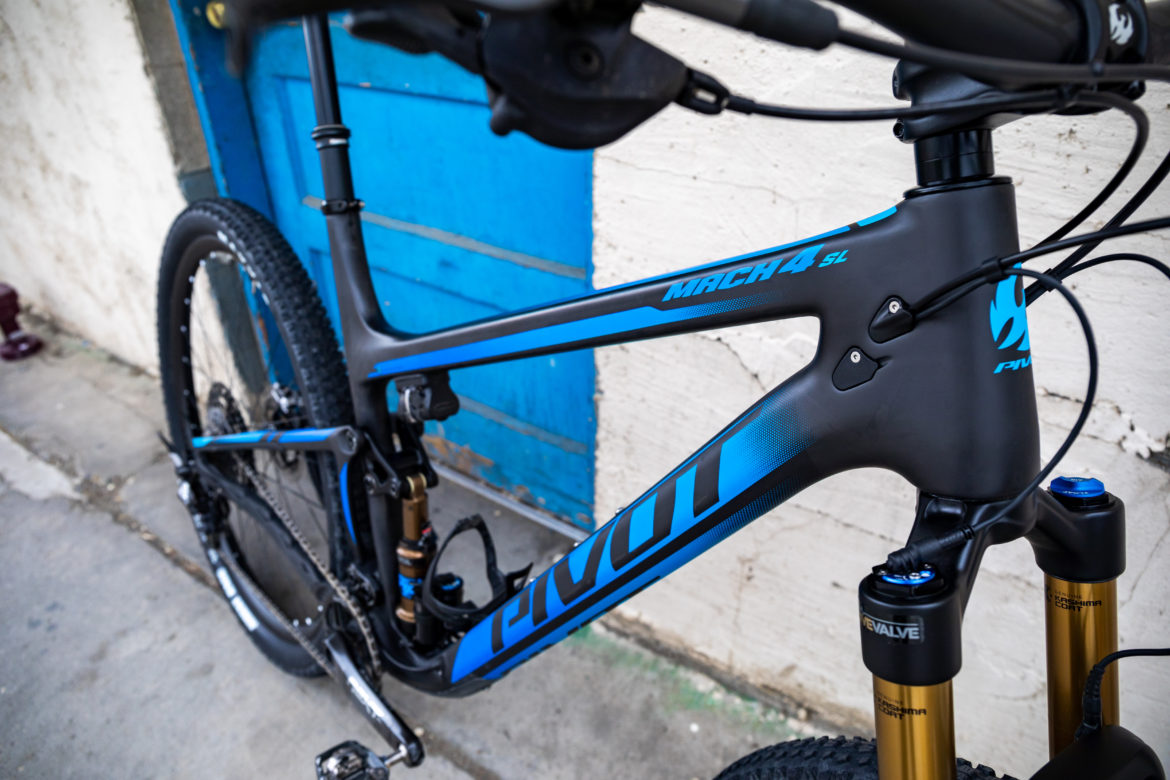 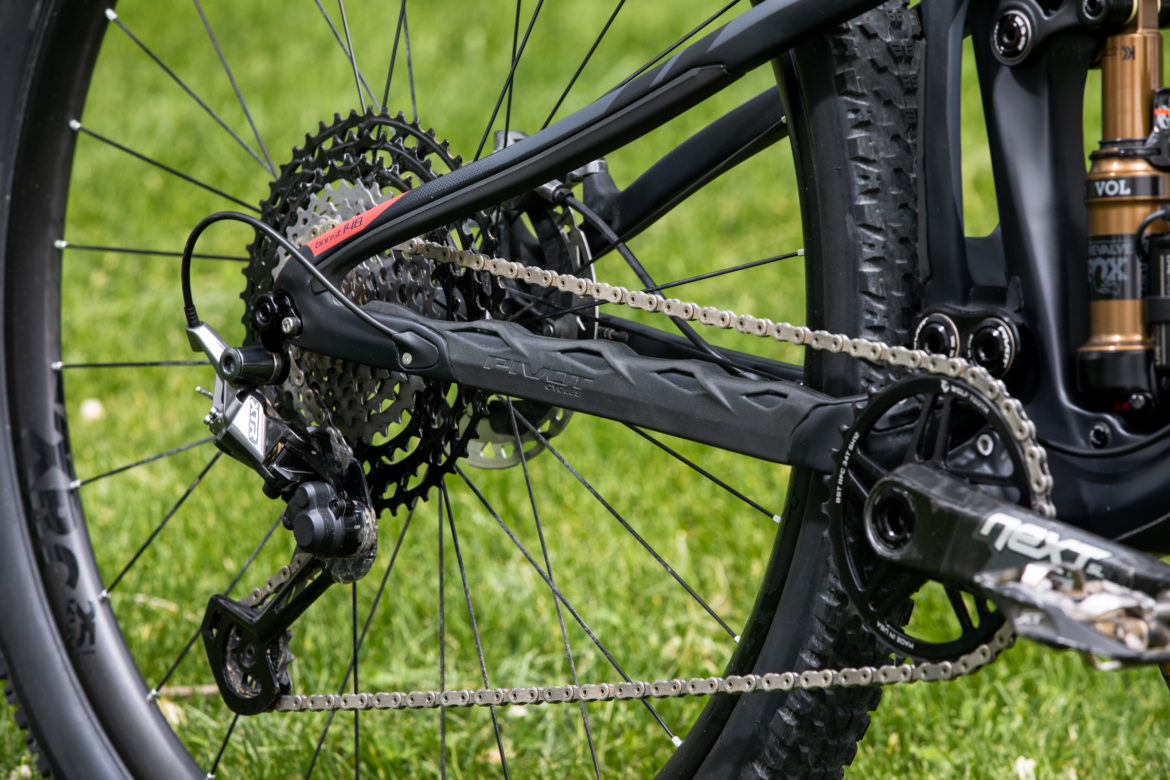 The builds top out at $11,300 for the carbon-specced, electronic-equipped build with Fox Live Valve automatic suspension control and SRAM Eagle 12-speed AXS drivetrain. There are many build options in between. 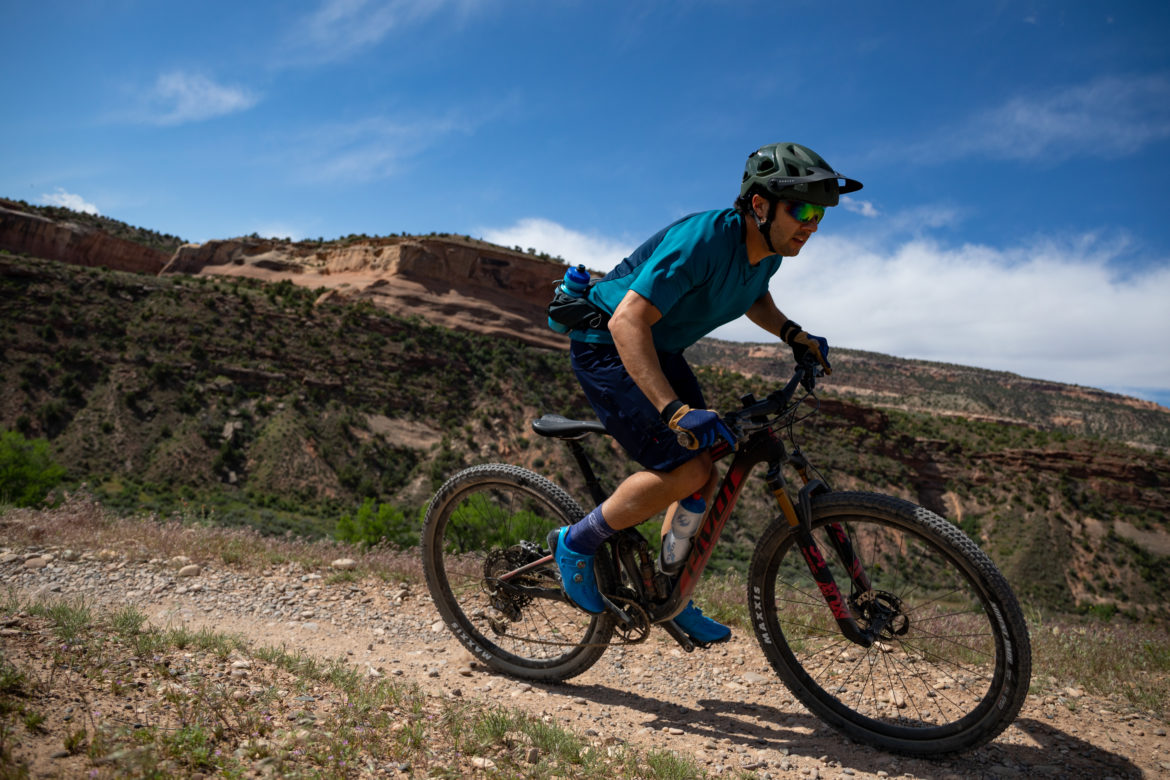 Pivot put together a pretty unique couple of days to test the new bike out on the Western Slope of Colorado. A lot of media camps include shuttles or ski lifts to keep writers’ legs fresh, but this time it was all about wearing our legs out and putting the short-travel DW-link cross-country bike to the ultimate test. I rode the Mach 4 SL with a 120mm Fox 34 fork with Live Valve, which relaxes the head and seat tube angles from the more racy version by a degree.

Our first day of riding was out on 18 Road in Fruita, which needs little to no introduction for most of us. The trails were in great shape as usual, even though the parking lot was busy, also as usual. Everyone spreads out nicely on the trails, and the city just got approval from the BLM to start building another 30 miles of trails in the 18 Road area. Yay for more fast, fun, and flowy goodness.

To be clear, about 90% of my riding on the Mach 4 SL was with Fox Live Valve turned on. I’d ridden the Live Valve system once before — at Interbike last year — on a Pivot Mach 5.5. The shock tune is a little different on the Live Valve equipped Mach 4 SL than it is without, but otherwise the bike performs as it would if you were to manually change the suspension to open, pedal, or firm throughout the ride. Turn the system on with a button on the controller, choose a setting between one and five which essentially controls the amount of damping, how fast the suspension opens, and how long it stays open. Then Live Valve adjusts the suspension mode for you faster than it’s possible for any human to even think about flicking a lever. 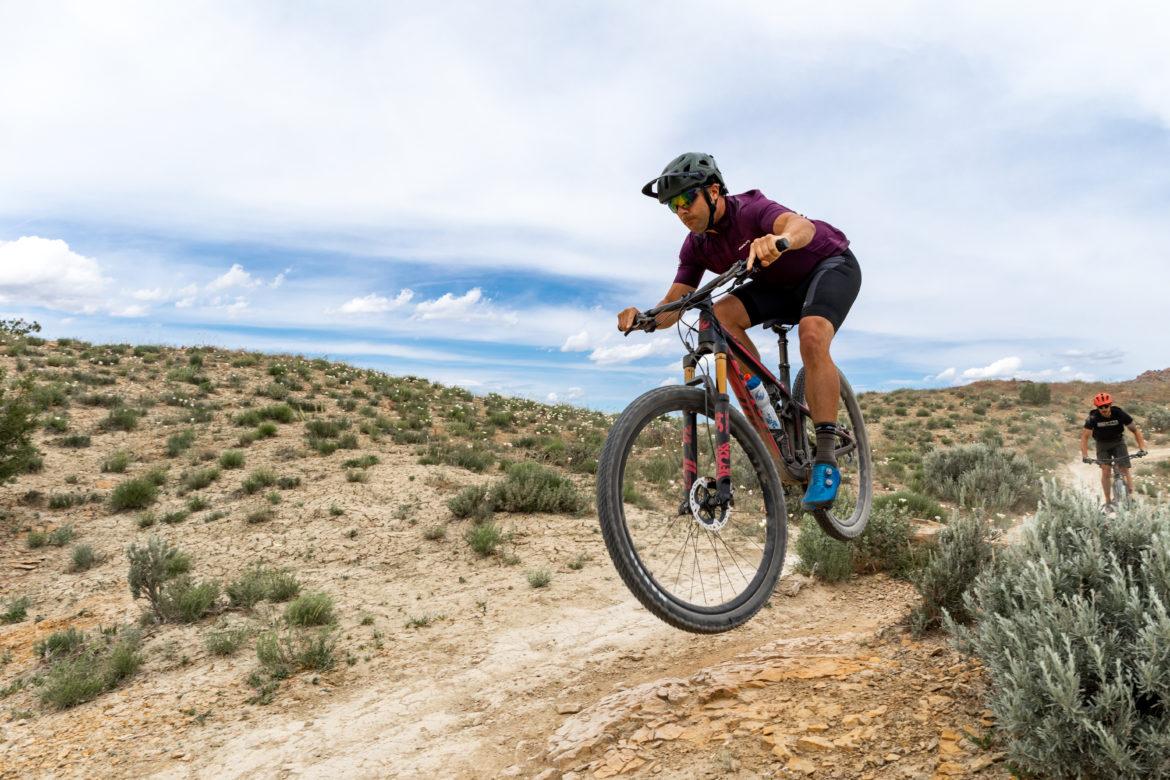 Without the system turned on, or if it runs out of battery, the bike sits in open mode. With the Mach 4 SL in open mode, the bike still retains a good amount of anti-squat and pedaling efficiency, but is noticeably softer than if the system is in “trail” mode. I have a feeling that if I rode the Mach 4 SL with a three-position rear shock and without Live Valve I would’ve had it in the middle setting most often, like I do with most bikes I ride, for a firmer all-around feel that suits both pedaling and descending.

The Mach 4 SL felt well-suited to the trails at 18 Road, not in the sense that anything more would be too much for the bike, but in the sense that it would be harder to think of a faster bike for the trails. Maybe a hardtail would be as fast or faster if that’s your thing, but the Mach 4 SL is a snappy climber, and the anti-squat and pedaling response in the suspension means that in between pumps and jumps, you can mash on the pedals to pick up even more speed.

The next day we ventured to the more rocky Kokopelli trails just a few miles southwest of Fruita. Out there we got a better feel for how the bike’s geometry handles chunky rock, up or down. Maybe in real steep pitches I had to chest bump with the handlebars to keep my weight forward, but the geometry felt very centered. On those steep pitches when I came out of the saddle, the rear wheel stuck to the ground and kept spinning. After that, it was all on me to get my body positioning and wheel placement correct to clear techy climbs. 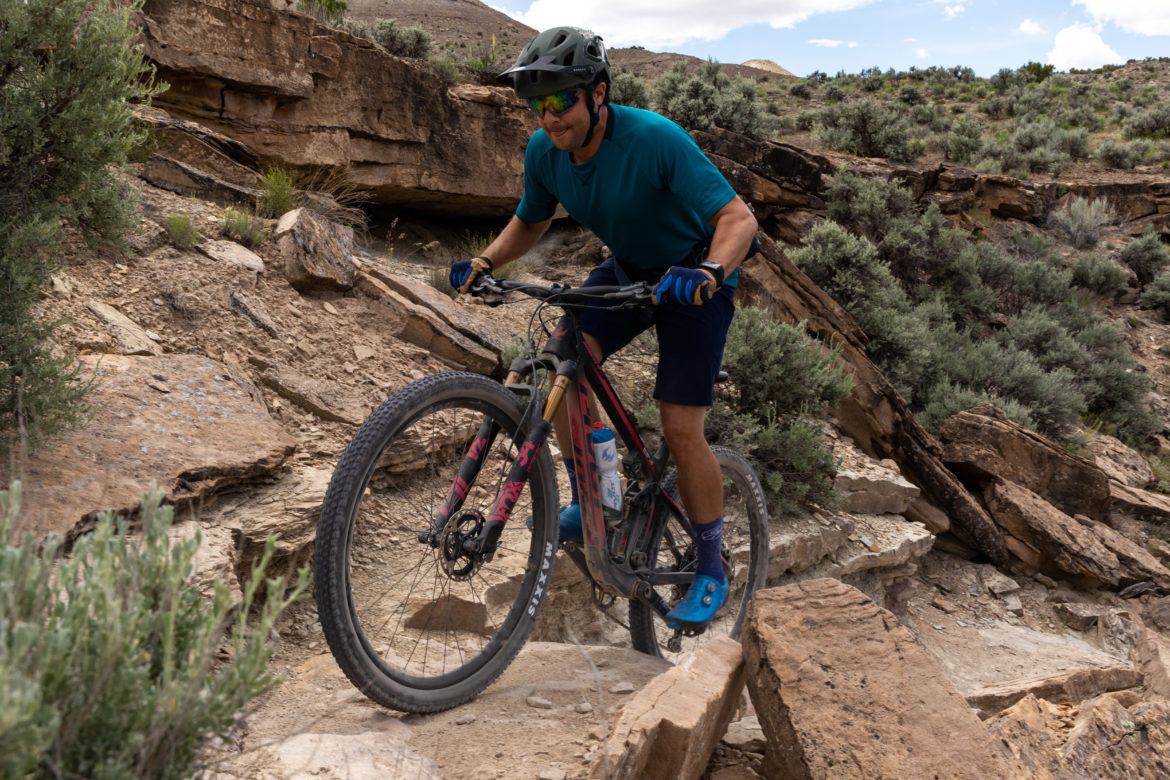 The final day of testing included the option to race the Epic Rides Grand Junction Off Road, a 40-mile cross-country race with almost 6,000 feet of climbing. The race packs tight, rocky singletrack climbing and descents, sandy and wide doubletrack ascents and downhills, and enough square and sharp rocks to not only flat a tire, but to crack a rim. Look for a separate recap of my race soon.

The Mach 4 SL’s pedaling efficiency proved its worth up a 2,000 foot sandy, doubletrack climb. I found that whenever I was in the mood I could pass over rocks that made other riders dismount and pull a bike up. I’m a far more capable descender than I am a climber, so when I could make up some time by taking stupid lines down janky trail, I really appreciated the Fox 34 on the front end, rather than a Fox 32. The bike’s relaxed head angle also let me get away with charging burly drops and rock gardens.

We all rode the premium-specced Mach 4 SL with carbon wheels, Live Valve, and Shimano XTR, all of which were excellent. I was really impressed with the durability of the Maxxis Ardent Race tires front and rear. I hit a rim once or twice on the sharp rocks in the Lunch Loops trails and the tires rebounded without puncture or snake bite. There were a few times when I wished I had some more meat on the front though, particularly in a few sandy, desert corners. A regular 2.4-inch Maxxis Ardent or DHRII would be my preference.

At a starting price of $5,000 for an entry-level Mach 4 SL build, it’s obviously no budget bike, and you’d actually have to spend $5,600 to get a 12-speed SRAM drivetrain as the starter build includes an 11-speed Shimano. But for a race-ready XC and trail bike, there is certainly value in the package. 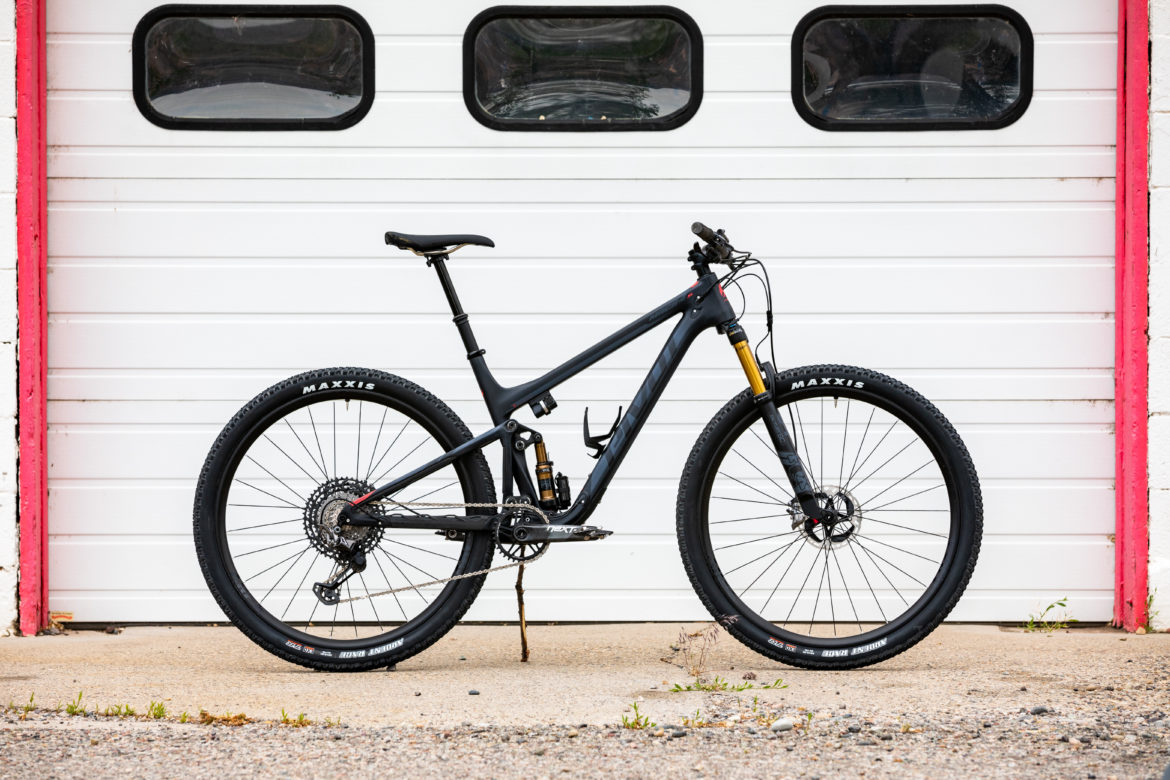 If there’s one segment I’ve really been enjoying lately, it’s these bikes that are hard to put into an XC or trail category. If I slack off on my base miles, I’ll still enjoy climbing this type of bike. Relaxed and longer geometry with a stiff fork means that on rough trails, I’ll only be a handful of seconds off my descent times compared to a longer-travel bike. On flow trails, the shorter travel rigs are probably faster.

The Pivot Mach 4 SL is one to add to this list. It’s an efficient and responsive climber with guts to attack a rocky climb and turn right around and charge back down. This means going fast all the time rather than being pegged into deciding if you prefer climbing or descending. Although if you do prefer climbing more, be sure to go for the World Cup build.