Riding 100 miles on a mountain bike is no easy task. We’re talking about, realistically (for me), about 12 hours of pushing my body to the limit in the steep, unforgiving Cohutta mountains.

One thing that isn’t helping my outlook on the event is that I’ve fallen a bit behind where I’d like to be in my training. I had a horrific cold the week of March 18-24 that kept me confined to the house and off the bike for over a week. As of the first of April, I’m still fighting off lingering effects from that cold, but I’m back on the bike and back at my training.

My training ride in Ellijay, GA last weekend marked the longest and most difficult mountain bike ride of my life. The Strava stats speak volumes by themselves: 67 miles, 10,200 feet of elevation gain, and almost 8 hours of moving time. But that’s not the whole story…

Here’s how this brutal ride went.

Ben, Brent, and I began the day by climbing part of the gravel Potatopatch Road to the top of Bear Creek. We descended the awesome Bear Creek trail and then connected into the Pinhoti, and linked together P1 and P2.

Next, we looped out to Highway 52 and pedaled up to the top of P3. We dropped back down the P3 singletrack to the gravel roads, and pedaled gravel back to the pickup truck at the bottom of Bear Creek.

After getting back home and uploading my ride to Strava, I realized just how bad that climb truly was: over 2,000 vertical feet in about 5.5 miles. Now, what’s really demoralizing is that this same sadistic climb is a part of the Cohutta 100 race course, and it’s about 50 miles into the race.

Sure, it could be worse: it could be 70 or 80 miles into the race, but I just know that 50 miles in, going back up Potatopatch is going to be the absolute last thing I ever want to do!

Okay, enough of my pathetic whining… on with the ride.

Once Brent and I crested the ridge (Ben decided to turn around and call it a day the second time we passed the top of Bear Creek), we rolled along the gravel roads over to the top of Tibbs. I had never ridden Tibbs or Milma before, and the plan was to descend those trails plus Winding Stair back down the mountain. After 40+ miles of hard Ellijay riding, we were so ready for some descending… but the descent down Tibbs was much more demanding than I expected!

It was still fun… but it would have been much more fun on a long-travel AM or DH rig. Since we were riding hardtail 29ers, the descent down Tibbs was almost as much of a workout as the climb up Potatopatch! After a couple of stops to shake out the forearm pump, we finally hit the junction with Milma.

We traversed the mountain side on the thankfully less-technical Milma trail (although there were still some rocks and jumps thrown in) to Windy Gap. We blasted down Windy Gap, airing out the endless rollers, blasted down the gravel access road, and dropped out on old CCC camp road.

The final grind back on CCC camp road was torturous. Already over 50 miles in with a projected 26 more to go, I quickly decided there was no way I was hitting my goal of 76 miles… and that I would be more than happy with just 70. Well, after pedaling over 10 miles back on old CCC camp and then Mulberry Gap road, complete with even more soul-crushing gravel road hike-a-bikes, we made an attempt to add on a little more road pedaling to make up the miles.

However, when we arrived back at the truck we were only up to 67 miles. I debated whether it’d be worth going back out for another 3 miles. I couldn’t think straight, Brent was not budging another inch, and it was already dusk–so we decided to call it a day.

Right after we finished loading the truck, I felt the first rain drops fall, and then the skies opened up. Our timing was perfect: it poured down rain on our entire drive back home.

At the end of the day, while I hadn’t hit my desired 76-mile goal, it was still an incredibly hard effort, at least for me personally coming off a bout of sickness. Also, mad props to my friend Brent for hanging with me the entire time, and doing it on a singlespeed. He’s not even training for anything, but can still sign himself up for a 67-mile ride with over 10,000 feet of climbing on a singlespeed. Dang.

My original training plan called for 85 mountain bike miles next… I’m going to try for it, but if for some reason I don’t hit that benchmark, I haven’t decided what I’m going to do. Initially, I was planning on having two weekends of taper prior to the race, but if I don’t hit my desired goal next weekend, I may attempt it again the following week. We shall see!

So the “following week” came and went before this post went to press, so I thought I should update with some info from this past weekend.

It seems that nothing ever goes completely according to plan when you’re training for a race, and this most recent weekend was no exception. Due to some unfortunate forgetfulness on my part, I left a bunch of my favorite mountain bike gear at Jeff’s house in Atlanta on Wednesday: my favorite hydration pack, arm warmers, favorite multi tool, external battery for my iPhone, and most importantly, my shoes. The only other shoes I had at home were my DH shoes. 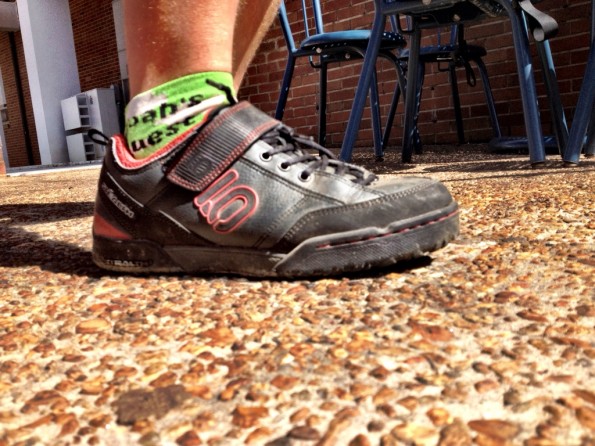 I made a plan to borrow a pair of nice XC shoes for the weekend and to do 150 miles on the road bike with Brent, but the day before I was supposed to ride the plan for borrowing shoes fell through and Brent found out that his thesis deadline had been moved up.

So I was in a bit of a jam: what exactly was I supposed to do for my training ride? Well, I didn’t want to push my long ride back any longer, so I told myself I was going to make it happen one way or another. Since I was having plenty of gear complications already, in order to minimize other complications as much as possible, I decided to stick to what I knew best: mountain biking, and in the Bull Mountain area.

To make a long story short, Saturday was a success! I successfully rode 87.4 miles with 10,551 feet of climbing in 8 hours and 42 minutes of moving time. 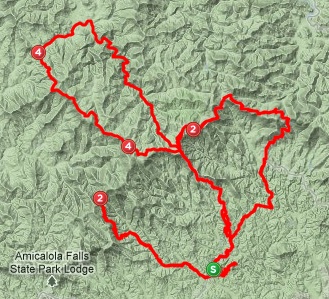 Aside from being heavy, I just don’t think those downhill shoes were intended for pedaling 87 miles of mostly gravel forest service roads. I had some issues with numbness and my feet falling asleep, but thankfully my foot stayed pretty fixed in the shoe and I didn’t have any issues with blistering.

There have been plenty of difficulties to overcome during my Cohutta 100 training: building my fitness, finding time to train, weather issues, sickness, gear issues, and more. By God’s blessing I have managed to overcome them, and my training has peaked according to schedule! Now it’s taper time, and in less than three weeks I’ll be hitting the race course and going for the big 100!

LOL, gravel road hike-a-bike. Potatopatch is no joke and I walked much of it during the race last year.

Good to know I’m not the only one!!

WoW, My biggest day ever under 50 miles included more gravel road then trail, and near level road at that, in the Platte R. valley, so I’ll not judge it as wining, when you climb 2K in 5 miles. It’s allways fun to be on a recovery, not worth the injury, or sickness, but nice to be better every day.

Thanks for the encouragement man 🙂

I see your Strava posts and I think to myself: “Damn, I feel accomplished when I ride 10 miles.” lol!

I definitely remember the days when 10 miles felt like an eternity! It’s amazing how your perspective can change over time.

I’m always impressed by those who take on these endurance challenges–not so much for race day, but for all the traning that precedes it. Forcing yourself to get out and push day-in, day-out for months in preparation takes real intestinal fortitude. I can push myself to exhaustion once in a while, but to do it on a regular basis; well, let’s just say I’m not that dedicated. Best wishes for the next three weeks and for the big event!

Thanks skibum! It really has been one of the toughest things I’ve ever done… and I haven’t even done the actual century yet!

Way to go man! You’ve done the hard work and put in the hours, now it’s time to rest up and get your mind ready. You’re going to do great! I’m sure you already know that keeping your head straight is just as important as strengthening your legs and lungs. Try to go in with a great attitude and remember to have fun! We’re all pulling for you Greg! I can’t wait to hear about the race when you’re finished!

Thanks for all of the encouragement! It means a lot! 🙂

Gregg I can relate to a lot of what you said about training not going as planned. I think the weather has set me back at least 3 weeks. I intended my first 80 mile ride to be 2 weeks ago but I won’t have time to do it until Saturday. I am hoping for 80 miles and 12,000 feet of a gravel grinder with only about 10 miles of singletrack. I wish I could mix it up more with singletrack and roads but it ain’t happening. I also kind of get nervous at that crazy climb at mile 60. I am not too worried about much up to that point. Best of luck on the rest of your training.

Yeah Potatopatch will be killer! Good luck on the rest of your training too man, looking forward to seeing you on race day!

Greg, I’m pulling for you. I had never even heard of the Cohutta until I started reading the training articles for last years race, but I moved out to Colorado and never had a chance to do it. I really miss the Pinhoti and surrounding trails and look forward to riding them again one day…especially P1 and P2. I am paying attention to your posts: I signed up for the shorter, but equally brutal Laramie Enduro in July. Coming from near sea-level, I have been riding as much as possible (with similar setbacks), so I feel your pain. Luckily I will have 2 road centuries under my belt prior, including the 120 mile Triple Bypass around 10,000 feet…so I am praying a combo of road/mtn miles will better equip me for a dirty century. Good luck and keep it up!!

Thanks for the encouragement! Good luck to you as well man!