As many of you know, my major goal for this spring was to ride 100 miles on my mountain bike. To that end, I decided signing up for a race would help ensure my success. I would have aid stations spread out all along the course, other people to ride with, a date to train for, and that extra adrenaline boost that comes from competing. But if you read my recent 2013 Cohutta 100 Race Report, you know my plan didn’t quite work out. Due to a combination of cold temperatures and miserable weather, I quit at about mile 60.

Even without a race date set in stone, nothing ever goes quite as planned. Due to the weather conspiring against me and life getting crazy with final exams, college graduation, and family flying into town, I was eventually left with one day: a Wednesday in early May. Since I was done with classes that was no problem, but my father and sister were flying into Atlanta that evening, meaning I needed to be off the trail by about 5 or 6 pm.

To accomodate that time constraint, I started off my ride with a dawn patrol. I was on the bike in the pitch black of the morning by 4:45am, with not nearly enough sleep the night before.

The weather forced me to choose Wednesday since it had rained the previous Friday through Monday. The sun came out on Tuesday, but I gave the trails and roads a full day to dry out. Still, early Wednesday morning some of the gravel roads were a rutted, muddy mess from the weekend before. After pedaling through some deep truck ruts I decided to stick with my original plan and hit the singletrack at the beginning of my ride.

The trails were in much better condition than the roads (and definitely better than they were during Cohutta), but the clay was still a little slick in spots. The conditions weren’t ideal, but I resolved to power through and not quit until my GPS read 100 miles.

I banged out about 18 miles of mostly singletrack as I rode into the dawn and listened to the forest wake up around me. A combination of Moss Creek, Black Branch, Turner’s Creek, and Jones Creek Ridge were the perfect way to start a long mountain bike ride off.

Next, to keep things interesting, I decided to connect a loop combination I had never ridden before. I mapped out a massive loop up and over Nimblewill Gap and then up the back side of Winding Stair Gap past the Springer Mountain trailhead. According to Google, that would be about a 38 mile loop, putting me at about 55 to 57 miles total when I next returned to the truck.

I had ridden up Nimblewill Gap several times before, and the climb to the top was brutal as always. The sun was slowly coming up, burning through some of the morning clouds and fog, making for beautiful views during the arduous pedal to the top.

This was the first time I had descended down the backside of Nimblewill Gap, and it was a blast: a fast, rocky, rutted out jeep road descent. But by the time I had connected over to my next major climb, I was feeling pretty beat. The climb back to the top of Winding Stair was agonizing, but the descent down the other side was a welcome relief.

I stopped, removed my pack, and took a nice, long 30-minute lunch break. That’s the great thing about not racing: you can take as much time as you need to relax and recoup! I ate a hearty lunch, lubed my bike, and prepped for another tough 45 miles.

My initial plan was to climb up Cooper Gap, ride across to Winding Stair, drop down Noontootlah, and come back up the torturous climb that I had barely made it up an hour before. That 47-mile loop would have put me over a hundred, but before I made it to the main Cooper Gap climb I decided I wanted to have no part of that much climbing! Instead, I decided to tool around and hit a number of trails and roads in the flatter area below.

If you’ve ever ridden in the Bull/Jake Mountain trail system, you know that our “flat trails” have way more elevation gain than anything to the south of us. For the next 45 miles, I proceeded to ride out-and-backs, short loops, and various combinations of some interesting, flowy, but somewhat flatter singletrack trails in an effort to make my 100-mile goal.

Staying down low also gave me another advantage: it would allow me to pass the truck much more often to grab food and tasty drinks as often as I pleased. The combination of entertaining singletrack, somewhat flatter terrain, and delicious fuel to look forward to at the truck proved to be the key to my success.

Highlight of the day: seeing a bobcat out on the trail. I think this is the first bobcat I’ve seen in Georgia, and it was a big one. It saw me coming and sprinted off into the woods but didn’t make a sound. Those things are fast and stealthy!

Despite entertaining trails and tasty beverages, the last few miles of any dirty century are no fun. Thankfully, with 7 miles to go, I bumped into a few friends who also happened to be out on a mid-week ride. Lee and Dustin were kind enough to finish off the last 7 miles with me, and were great cheerleaders as I officially hit the 100-mile mark! 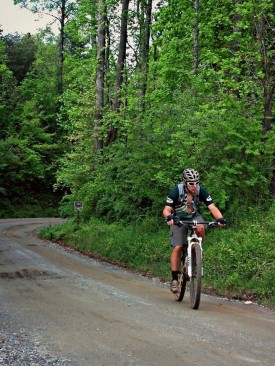 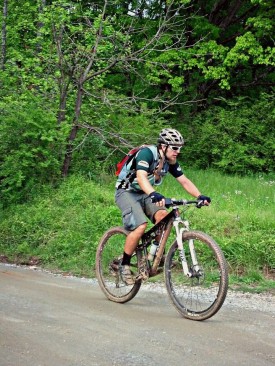 My Strava app said 100.8 when I hit the save button… but when I uploaded the file it only said 99. Strava stole 1.8 miles from me… I’m calling it 100! Upon close examination of the file, I spotted several straight lines where my phone lost reception, so 100 it is! 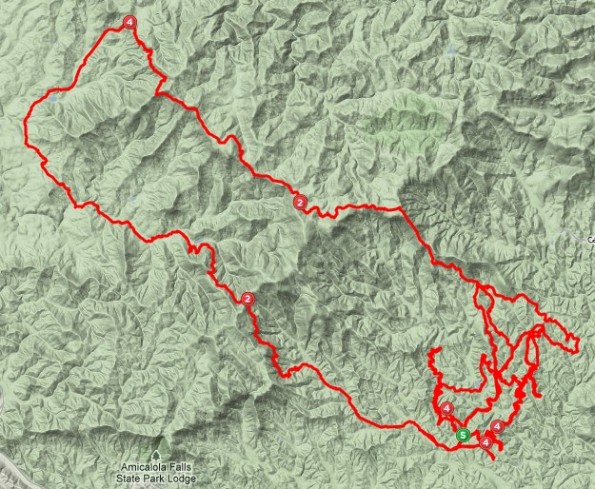 It feels so good to have accomplished this monumental task… and it feels so good to not have to ride so many miles every weekend! While I enjoyed my fling with ultra endurance mountain biking, I’m not sure if I will continue doing these long efforts. Personally, I get much more enjoyment out of riding my bike for shorter periods every day instead of resting my legs for long efforts on the weekend and spending most of the next week recovering, only to repeat the process again the next week.

Still, setting this goal, training for it for over four months, and finally accomplishing it despite so many adverse circumstances was extremely gratifying! I am happy to have made it to the end of this journey. Many thanks to everyone on Singletracks for training advice and encouragement, and especially to MTI. Also, a huge “thank you” to my amazing wife for allowing me to spend so much time on the bike every weekend! It was a huge sacrifice on her part as well.

So what about you? When will you attempt the big 100?

Gear
These MTB Deals are Fire, including 40% off Patagonia Dirt...
Gear
Never Underestimate the Power of a Good Zip-tie
Gear
The Maxxis Minion DHF Tire is Still the One to...
Gear
Mountain Bike Tire Repair Tips: From Emergency to Semi-Permanent
Subscribe
Login
Please login to comment
8 Comments
Most Voted
Newest Oldest
Inline Feedbacks
View all comments

Now you’re ready for the Leadville 100! Oh wait, you said your done with centuries. 😀

Congrats on completing it!

And yeah, IDK about the $345 entry fee for Leadville. Maybe if I lived close enough that I didn’t have to pay much to travel there, I’d think about it.

But TBH, I think I’d rather do the Bailey Hundo before I did Leadville.

Great job Greg! That is a truly epic ride!

Thanks man! I’m glad to have it done 🙂

Congrats, I haven’t even ridden that far on my road bike. Well done.

Thanks! If you do ever decide to ride distances like this, just know that it is totally doable if you train for it.

Gregg congrats man I can’t wait to ride with you guys on June 22 at Bull/Jake! I can’t believe I am saying this but I miss my long training rides. I am so busy with work I don’t have much time to get in a few hours at a time. Hopefully when things slow down a bit in July I can get back into the long rides and do a 100. Great ride!

Dude, I’m looking forward to riding with you again!

I did 7.5 hrs on the road bike last weekend, and it was the first long ride in about a month after this one /\ /\ . It did feel good to be out there for most of the day and to just dig deep again!