An exceedingly stupid crash on the easy part of the Downieville Downhill course in the summer of 2017 resulted in surgery, a cast, crutches, a wrecked summer, and a slow, hobbling recovery. I was back in the saddle (albeit on the bike path) by September, so by now I’ve got a good eight months of crash-free riding under my belt. And yet, a toxic wiggly-worm of doubt has neatly inserted itself into my sub-conscious. This doubt asserts itself not only at the crest of jaggedy drops or rocky riddles, but also at tiny twigs, pine needles, and embryonic ruts. I’ll be riding along, zippy do da, pleased as punch, then the wiggly-worm pushes the big red button in my brain—“STOP! STOP! OMG Stop Now!  It’s a… PEBBLE! A Pebble I Say!!” After one too many such instances I decided it was time to seek professional help.

Ian Massey has been a fixture in my mountain bike circle for more than a decade. The hopped up twenty-something with the showy muscles, lots of air, and his sights on riding pro has been replaced by a very slightly toned down (very slightly) mid-thirties skills instructor and coach who really really really wants you to ride better. I wondered if he could help exorcise my button-pushing panic-worm.

I looked up his ‘Trail Technique’ website and clicked on the video of him holding some poor suckers’ front wheel four-feet off the ground, an inverted ass over teakettle, imploring him to go further back, further back. Ian was on about pivot points and balance, and if the subject knew what was good for him, it’d be all “Yessir! Right away sir!” Else he’d end up flat on his back in a jiffy. 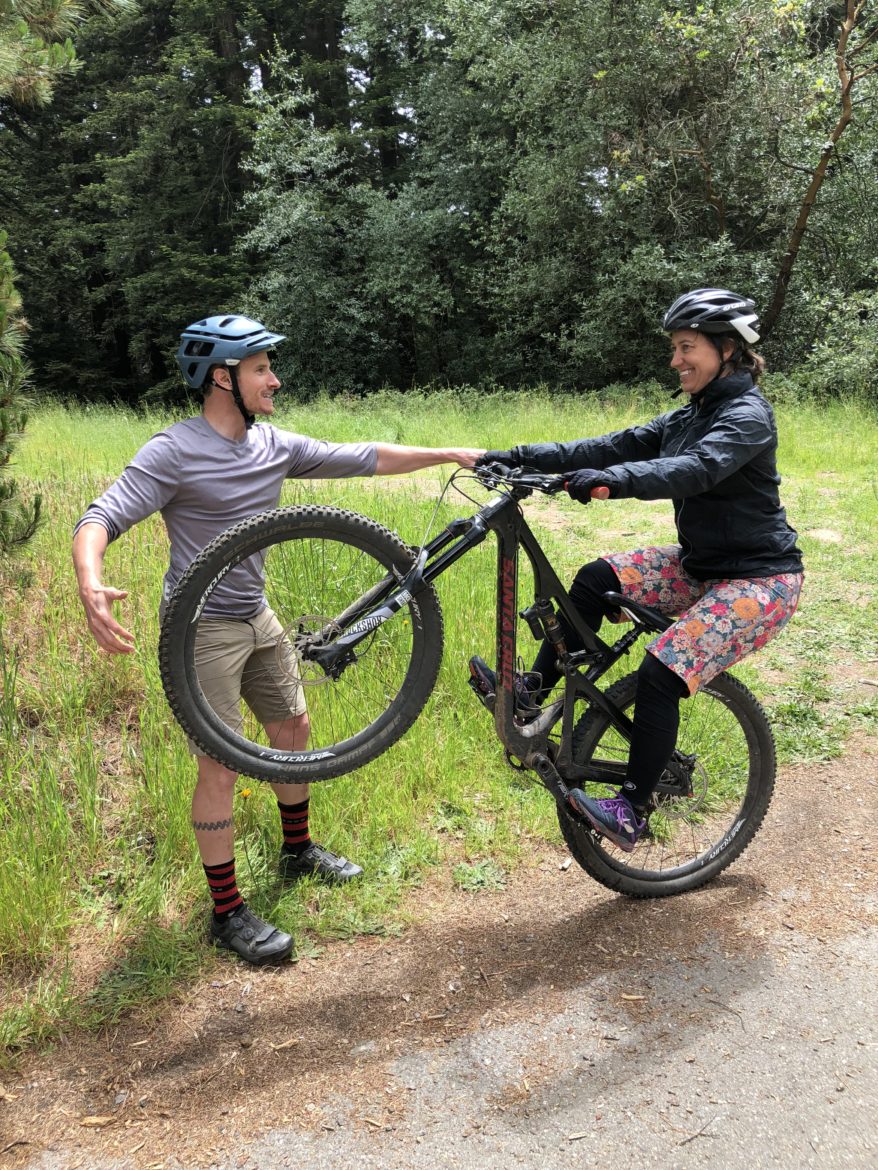 So there I was about 4,000 degrees past vertical, Ian’s right arm casually holding me aloft, going on about pivot points and balance, me all “yessir, no sir, right away sir.”

Ian made us ride flat pedals for the class, and I grudgingly submitted (I loathe flat pedals). We rode over some boards spaced deliberately to bring us to a dead stop if not ridden right, and he drilled us how to ride them right. The answer to most everything we learned that day was “weight back.” He spoke often about violence and its prevention—keeping the bike stable under you when all hell was breaking loose below. To this end, he also locked out our suspension so that we could better feel the bike and the trail, and the results of our efforts.

After the boards-on-flat drills, we moved on to the small obstacle while climbing drill. I’m a wicked quitter so this one was good for me. Having witnesses to shame me into follow-through was key–I seem to have issues with commitment. Lately my brain is too quick to say “oh you can’t do that. Why try? Just gonna fail. Might as well walk.” My brain also does this nifty thing where it internalizes other people’s crashes as well as my own. Super helpful, right? So not only “you can’t do this one cause it’s hard,” but also “Suzie crashed there three and half years ago—can’t do that one!” It’s really pathetic.

While I won’t be able to re-create his physics lecture with any accuracy here (getting information from Ian is like taking a sip of water from a fire hose), what he said made sense on an elemental level. Though I am more of a letters-than-numbers person, I appreciated being given the reasons to do a thing, not just a “do-it-cause-I-said-so-I’m-the-professional” approach. I received that exact response in the past from one such highly-paid professional and it made me deeply angry.

Ian coaches at all levels, his roster full of racy names like Alex Wild, Paul Serra, and Sandy Floren. He also coaches Joe or Jill McNewbie who just bought a mountain bike and who have zero interest in ever seeing a start line, let alone a podium. Regardless, he starts either the same way.

“I try to break clients of their bad habits and teach them how to make stability and lift with their mass. I do the same process from beginners to pros. Good technique is good technique.” 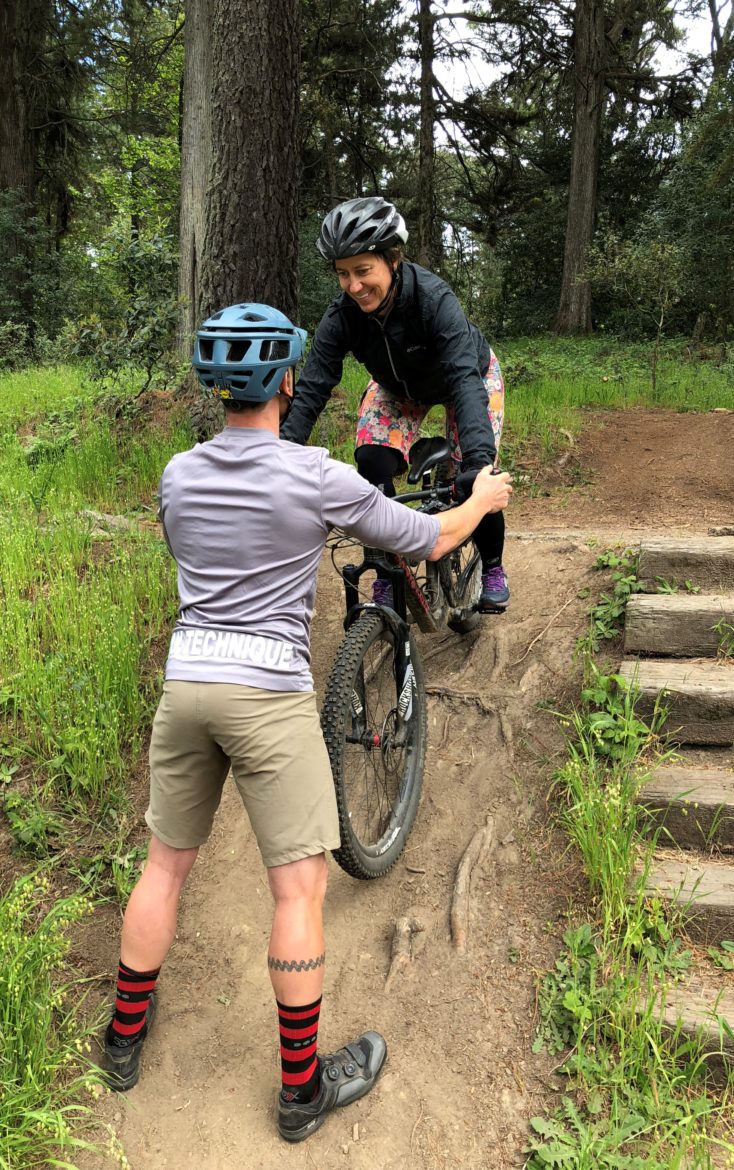 Ian gave us homework, and this, along with a very small and surprising tidbit have already made a huge difference. I rarely ride alone. It’s not that I don’t like to, it just doesn’t seem to happen much. And since I am usually the slowest one on group rides, I don’t take the time to session anything because people are already waiting for me.

So, two days after our skills class, I set out to ride Tamarancho by myself. I wouldn’t let myself move on from a switchback, or a rooty climbing corner until I had cleaned each three times in a row. And the surprising thing that made a huge difference? The thing Ian won’t even remember he said because it’s so simple? Breathe. Relax.

Good grief. Unbeknownst to me until that wisdom sank in, I was tensing up, holding my breath, white-knuckling the handlebars in preparation for my inevitable fail ‘n flail. Look up—Relax—Pedal—Breathe. What a concept. Now I’m still not going to be tail-whipping past you any time soon, riding a wheelie through your local rock garden, but I’m way more confident that you won’t find me shrieking and slamming on the brakes in front of an errant stick.

I’m also confident that taking some follow-up classes would provide a significant return on investment. Slaying the mental and physical dragons of both fear and bad technique will likely take more than one session. There’s only so much my pea brain can absorb in one go.

But no matter where you fall on the skills spectrum—total beginner to already pro—rattled from a crash or just looking to move it up a notch—check out Trail Technique or one of the many other skills classes or clinics offered around the country. A new dose of confidence might be just what the doctor ordered.

Thanks to Ian Massey for providing complimentary coaching services to the author.

Trails
Cuyuna and Pisgah Add New Trails, While Utah Gets a...
Trails
Passing By: Mountain Biking the Steep and Rugged Trails of...
Gear
MTB Deals to Help Beat the Heat
Progression
Sizing Up or Down Based on Riding Style Can Work,...
Subscribe
Login
Please login to comment
3 Comments
Most Voted
Newest Oldest
Inline Feedbacks
View all comments

Good read Maureen. Glad to hear you are working thru you post crash jitters.

A skills clinic is something I’ve been thinking about too. As someone that grew up riding dirt bikes, mountain bikes are sketchy handling. By that i mean things happen fast on a 32 pound bicycle compared to a motocross bike. Now, I can roll pretty well on technical trail from years of riding, but a good instructor could help take things to a new level and enhance safety. Sounds like a goog plan to enjoy the sport more!

Great writing and great read, Maureen. Sounds like it’s time for me to think about another skills class.

Thanks for the responses—much appreciated! I’m really looking forward to honing some of these skills. This was Way overdue for me.