My boyfriend proposed. It was really sweet how he was all shy and nervous. Here’s how it went down.

Him: {shuffles, clears throat, looks down} “Hey, so, um….we’ve been spending a lot of time together, and well, I guess I wanted to ask you something?”

Him: {clears throat, delivers next monologue at warp speed} “Well I really think we should do it this year it’s really awesome and I know I just know that you will love it and for a really lot of reasons THIS is the year and yeah it’s really hard and you’ll want to quit I MEAN we will want to quit but we won’t and it will be great and there’s beer and it’s ITALY and AUSTRIA and SWITZERLAND and yeah it’s seven straight days with a metric f*&k-ton of climbing, but it will be GREAT!!”

Him: “Oh, the Trans Alp mountain bike race–. Did I forget that?” 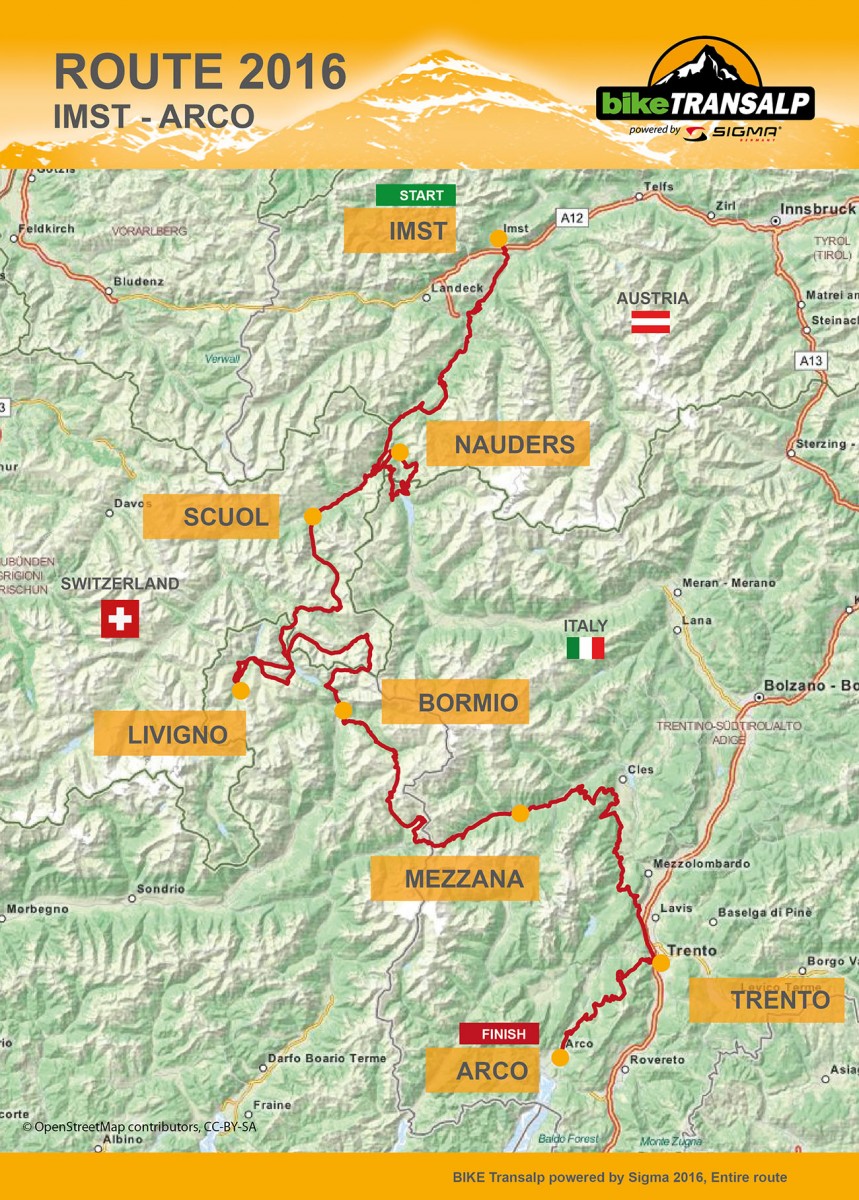 The Trans Alp is is a 7-day mountain bike stage race that begins in Imst, Austria, passes through Switzerland, and ends in Lake Garda, Italy, traversing the European Alps on a combination of trails, gravel roads, and a smattering of paved roads to connect the stages. 600 two-person teams participate from over 40 countries, teams that must finish each stage within two minutes of each other.

I whined and prevaricated for a grand total of seven minutes, then accepted his proposal. Of course, saying “yes” and seeing his happiness was the easy part. Now I was supposed to “train” and “watch my diet” and generally ride the living hell out of my bike. The website for the Trans Alp race attempts to walk the fine line of telling-it-like-it-is while also inspiring you with gorgeous shots of snow-topped spires and smiling, absurdly-fit bikers.

The descriptions are earnest and entertaining, with stages described as “sporting, technically peppered and ambitiously scenic,” and for another, “most impressions will be new even for participants from two years ago, because back then this part got obsessed by maddest rainy weather and not more than 10 degrees outside. So let’s go.” Well sure, let’s go.

For about a month after saying “yes” and getting up at a million o’clock on a weeknight to register for the event which at that point was a safe 32 weeks away—a whole winter and spring—I refused to use the handy online “math conversion” calculator saved to my desktop. 89,28 kilometers and 2.961 meters to climb? On average, every day, for seven days? I dunno, sounds cute. It’s less than 3 meters, how bad can it be? When I finally mustered the gumption to convert, I just about coughed up a Smurf. 323 miles, 58,000 feet of climbing. An average of 46 miles and 8,200 feet a day.

We visited a professional—had him find our respective max heart rates, lactic thresholds, endurance zones, etc. It was very odd to hear that our training should begin with what felt like a 6-week vacation—8 hours a week at a heart rate that would have me lapped by old ladies on “comfort bikes” wearing Keds. I’m told that this low zone builds something-or-other, so I’m trying to go along with it.

Despite having told the previously-referenced boyfriend on multiple occasions and on no uncertain terms that I would never—repeat NEVER—ride on the back of a tandem, guess what was under the Christmas tree. Yup. He hotfooted around the thing “So, we should just try it—I’ve already got other people who will stoke if you really don’t want to—but, but, just seven times, that’s all I ask, just ride it seven times with me. Okay? It will be a great way for us to train together, yeah?” Turns out it’s not as bad as I thought. We’ve done four rides so far and no knives have become lodged in his back to date, and it does indeed allow for us to train together. And to stay within two minutes of each other.

The two-minute rule is daunting, as my significant other is significantly faster than I despite his being ten years my senior (I’m 46—do the math, but don’t be fooled—he regularly schools 30-year-olds). Fortunately, his love of beer and fascination with the European mid-mountain hut (best idea ever!) mean that he’ll be waiting for me to chug up the climbs with a stein in hand. In order to make this race as enjoyable as possible, I am ramping up hours per week spent on the bike—9 in December, 10 in January, 10-12 in February, March, and April. May through June is a combination of long rides, races, road rides averaging six hours, and four-day back-to-back rides similar to TransAlp. It’s not clear where going to work fits in. For now, I am clocking the required hours through a combination of spin class, riding to work (not enough), a weekly 2-hour night ride, and riding both road and mountain on the weekends.

Your Singletracks.com crew did a great podcast on training for racing that you can check out here. I’ll be posting more about our progress between now and July, musing on bike and gear selection, complaining about my life sans Haagen-Daz, and generally riding the living hell out of my bike(s). For now, I need to go back and check out Helena Kotala’s post  “Eight Yoga Poses for Mountain Bikers” so that I might remove the perma-hunch from my posture.

Culture
Singletracks Best Reads: June 2022
Trails
An Intro to Bikerafting: How it Works, and How to...
Progression
Mountain Biking with Asthma: How One Elite Athlete Controls it
Gear
An Inverted Dropper from Enve, Revel DJ Bike, and Improved...
Subscribe
Login
Please login to comment
1 Comment
Most Voted
Newest Oldest
Inline Feedbacks
View all comments

Haha yes, such a fun story!! Good luck at the race–I’m sure you guys will have a blast!