Whether a beginner or a veteran trail slayer, you have or will likely experience arm pump. Not to be confused with the celebratory gesture–fist pump–made famous by a certain club-going group in New Jersey, arm pump is the undesirable, painful, numbing effects of repetitive jolts transmitted from the trail to your arms, rendering them useless. Some riders deal with arm pump from time to time and for some, it’s a chronic problem with potentially hazard outcomes if left unchecked. As it turns out, arm pump can be prevented (or at the very least, its symptoms alleviated) with simple, cost-effective measures.

Now, time to hit the books! 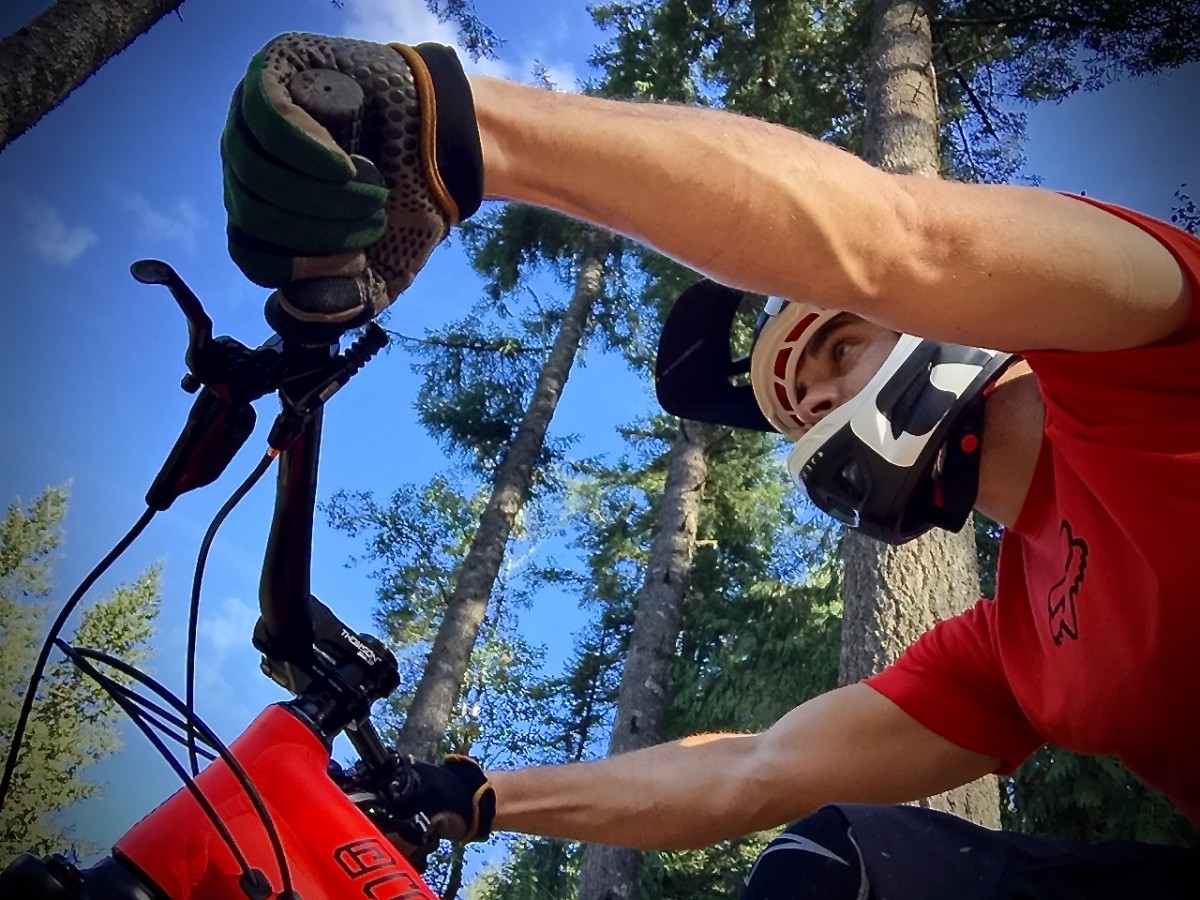 “Arm pump is a clinical condition in which an individual develops intermittent marked pain in the forearms after a period of exercise or exertion. The pain is thought to arise due to swelling of the muscles of the forearm that affects the blood flow to these muscles and causes the oxygen level to drop.” -Professor Adam Watts, Elbowdoc.co.uk

Arm pump is an imbalance of supply and demand. In exercise, skeletal muscles consume more nutrients (oxygen, electrolytes, etc.) and produce more byproducts (carbon dioxide, inflammatory mediators, etc.) than at rest, requiring an increase of blood flow to both deliver and carry away these substances. The problem arises when blood volume exceeds the ability of the muscle compartment to accomodate the increased flow, thus cutting off any new supply and the ability to wash out inflammatory products. The result is a decrease in oxygen delivery and build up of inflammation, which causes pain, tissue hypoxia, and loss of function. Furthermore, when venous return from the arms slows, swelling ensues, causing nerve compression.

Why the lack of accommodation? Muscle fibers are bundled in compartments separated by connective tissue called fascia. Fasical tissue will stretch, but the degree to which it does is limited by its dense, fibrous nature, in order to serve other functions such as attachment and stabilization of tendons and other organs it envelops.

Depending on the incidence and severity, reducing arm pump comes down to addressing a slew of factors that fall into one of three categories: technique, circulation, and equipment or setup. The goal of each intervention is directed at reducing the work of your forearms, thereby reducing the demands your arms put on the rest of your body, to avoid the pain and decrease in function caused by inflammation and hypoxia.

Brake sparingly. The more you reach out for a fingerful (for some, a handful) of lever, the more strain referred to your arms. Instead of braking through a corner, try squatting through the bike to add traction. Instead of braking in the rough/loose/rocky section, brake before or after. When you must brake, move down and behind the saddle (while making sure that you remain centered over the bottom bracket), driving your feet through the pedals so your legs oppose the stopping force instead of your arms. When and when not to brake is a separate discussion in and of itself, but these tips are the more salient when it comes to reducing arm pump.

Light hands, heavy feet. Lee McCormack taught me this one, and this advice has since changed my riding. Downhill is opposite of uphill, right? So you should be positioned differently when descending. Instead of weighting the front end and rocking those bars as you would on a Strava-crushing climb, get low on the descent, hips back to a degree that matches the grade, and press into the bottom bracket through the pedals. As for your hands, even though you’re a trail slaying ninja, lighten up on the kung-fu grip and think of it more like tea time.

Look ahead. At speed, positioning and weighting yourself accordingly is all about timing and the further down the trail you look, the sooner you’re aware of terrain changes. The earlier you see up a rock garden, the quicker you can anticipate a change in body position and the need to brake, and the less likely your arms will bear the burden of the brunt end of a rock-strewn singletrack.

Warm up. Warming up is especially important if you’re on the lifts or shuttling, as you have little time to do so before a gnarly downhill. Performing some simple upper body exercises becomes just as important as a quick spin when arm pump is the only thing preventing you from a peak-to-creek run. It’s not like you have to break out the Jane Fonda videos. Just pick a comprehensive move you can perform for a minute that’ll get the blood flowing. Also, try some compression sleeves to improve venous return and keep you warm, especially in the colder weather months.

Stretch & release. Lift one of your arms out in front of you with palm facing up. Bend your hand downward and slowly pull it toward you using the other hand as you feel the tension in your forearm. Do this for both arms and repeat the process with palms facing down. What does it mean to release? After a masseuse (or masseur) tells you you have knots in your back they proceed to press on that one area until the hardened area is soft again. So, stop being so knotty! Fascia stiffens and requires a bit of coaxing to soften it. You can use the infamous foam roller, which works well for larger leg muscles or a less expensive approach like a lacrosse ball, wooden dowel, or if on the trail, your handlebars.

Drink Up. Imagine the fascial layer as your toothbrush–pliable and limber when wet (and warm, see above), but stiff as hell when dry. Like any other tissue in our body, the fascia needs to be hydrated and, like your toothbrush, performs best when wet and warm.

Breathe. Have you ever taken a photo of your no-hands-banger only to realize everything was spot, on except your face looks like a blowfish? When the going gets rough we clench our fists, pucker our lips, and hold our breathe. Recall the clinical description of arm pump: “The pain is thought to arise due to swelling of the muscles of the forearm… and causes the oxygen level to drop.”

Grips. These come in all forms, shapes, and sizes so sufficeth it to say you can do some experimenting on your own with this one. Personally, I’d rather just focus on not gripping so hard on whatever grips you currently have. You could also try a modified grip when climbing to prevent the tendency to tighten your hold when you really don’t need to.

Brake lever position. The best position for your brake lever is one that requires the least amount of hand and finger movement. Setting brake angle at the trailhead while straddling the top tube is a good starting point, but you won’t truly get it dialed until you decide where your hands rest in the correct downhill stance. Once set, take note of the alignment so you can quickly get them back in the event of a crash or after making other cockpit changes.

Carbon bars. Who doesn’t want an excuse to get some carbon? Although carbon fiber is thought to more effectively reduce energy transfer than alloy, the ability of even carbon fiber to do so is limited. As the least conservative approach, I think you’re better off ruling out other causes before dropping some heavy coin. On that note, the Spank Vibrocore is a foam-filled alloy handlebar aimed at reducing the frequency, amplitude, and duration of energy transfer, and won’t set you back as far as a carbon purchase.

Ride. Last but not least, don’t let the effects of arm pump jar your morale. Unless arm pump is causing loss of function or severe enough symptoms to compromise your safety, keep riding. Keep riding to better understand the problem and to judge which adjustments in technique, circulation, and equipment or setup are improving outcomes.

Use these tips in conjunction with our July video from GMBN.

Your turn: There are certainly many, many more interventions out there from forearm workouts, physical therapy, anti-inflammatories, to surgery, and here we’ve only scratched the surface. Have you experienced significant arm pump, and what have you done to prevent and alleviate it?

Trails
An Intro to Bikerafting: How it Works, and How to...
Progression
Mountain Biking with Asthma: How One Elite Athlete Controls it
Gear
The We Are One Arrival Is a Mid-Travel Bike With...
Trails
Trail Flow: Copper Mountain adds Pump Track, Adaptive MTB Trail...
Subscribe
Login
Please login to comment
2 Comments
Most Voted
Newest Oldest
Inline Feedbacks
View all comments

I never knew what arm pump was until reading this. I log between 600-700 miles of riding per season and this has never been an issue for me. I guess I’m one of the lucky ones. From riding my motorcycle, I’m a firm believer in keeping the grip loose and relaxed, even when hammering it, same when I’m on my mtb.

A great article!! its fantastic to see someone speaking about Arm Pump who actually understands physiologically what is going on in the body. Not just another key board worrior telling people its all in there head. Arm pump is an ongoing battle for so many riders and thats why we have dedicated our business MotoEndurance to reaserch and finding a cure whilst providing riders with options and education for Arm Pump. Love your work, good job!